Europe's single currency has reversed almost half of this year's losses against the Dollar since financial markets took an optimistic view on the outlook for China in its continuing battle with the coronavirus and for the U.S. as the Federal Reserve (Fed) attempts to get the better of inflation.

But on both counts the market's optimism may have been premature and events this week may be likely to make that clear with potentially adverse implications for the Euro to Dollar rate, which would well to hold above the 23.6% Fibonacci retracement of its November rally around 1.0303.

"EUR/USD is consolidating at higher levels - having been buoyed by the 20% recovery in European equity markets amidst declining energy prices. Equally, business confidence has been holding up a little better," says Chris Turner, global head of markets and regional head of research for UK & CEE at ING.

"We cannot rule out EUR/USD trading back up to the 1.0480/1.0500 area again (though the reasons for that are far from obvious) but reiterate that the second half of the week could potentially push EUR/USD back to the 1.02 area," Turner writes in a Monday research briefing. 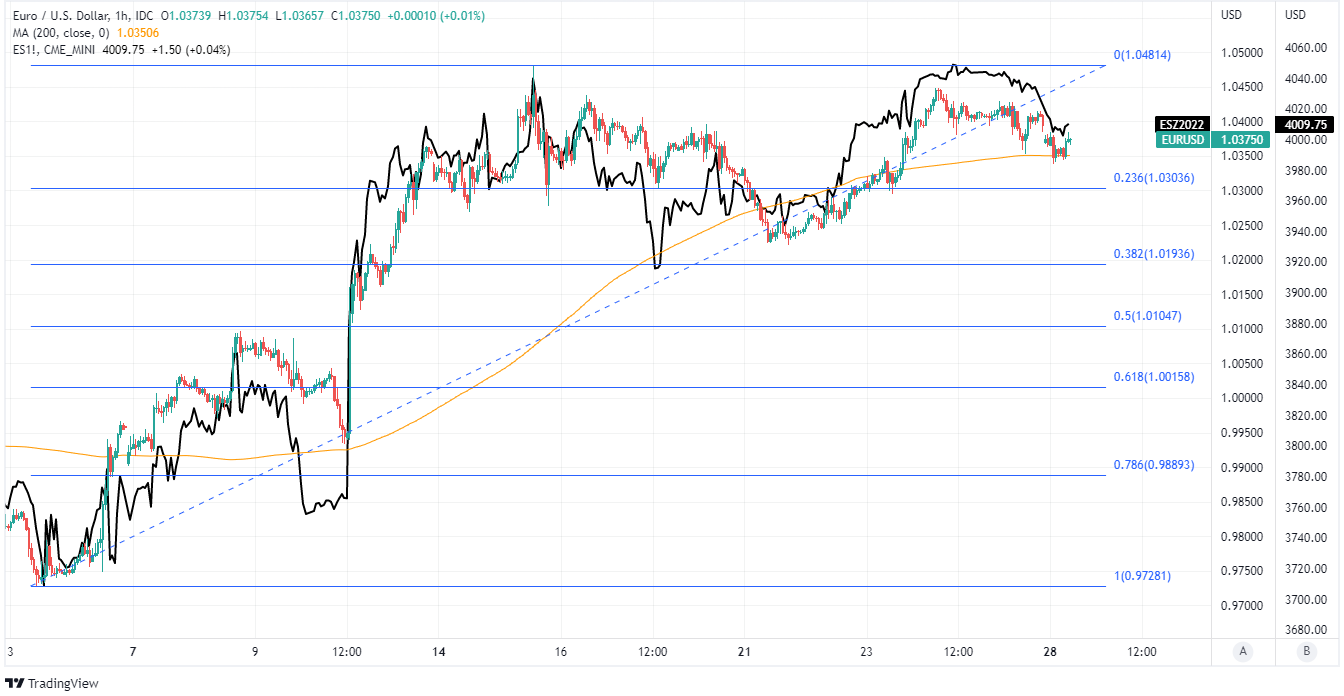 The Euro was on the back foot Monday as coronavirus-related restrictions and public protests against them in parts of China emphasised that investors were premature in contemplating earlier this month the potential asset price implications of a full reopening of the world's second largest economy.

But while developments in China are likely to set the mood around the opening of the week, Wednesday's release of European inflation figures and subsequent events in the U.S. are likely to be the most consequential for the single currency and Euro to Dollar rate outlook in the short-term.

"EUR/USD can take some direction from Wednesday’s November CPI. Market pricing suggests there is no consensus yet on the size of rate hikes at the ECB’s 15 December meeting with 62bp priced," says Carol Kong, an economist and currency strategist at Commonwealth Bank of Australia.

"An upside surprise to the November CPI data can lift expectations for a 75bp hike in December and support EUR.  Conversely, a below consensus print can weigh on EUR if market pricing unwinds," Kong and colleagues write in a Monday research briefing. 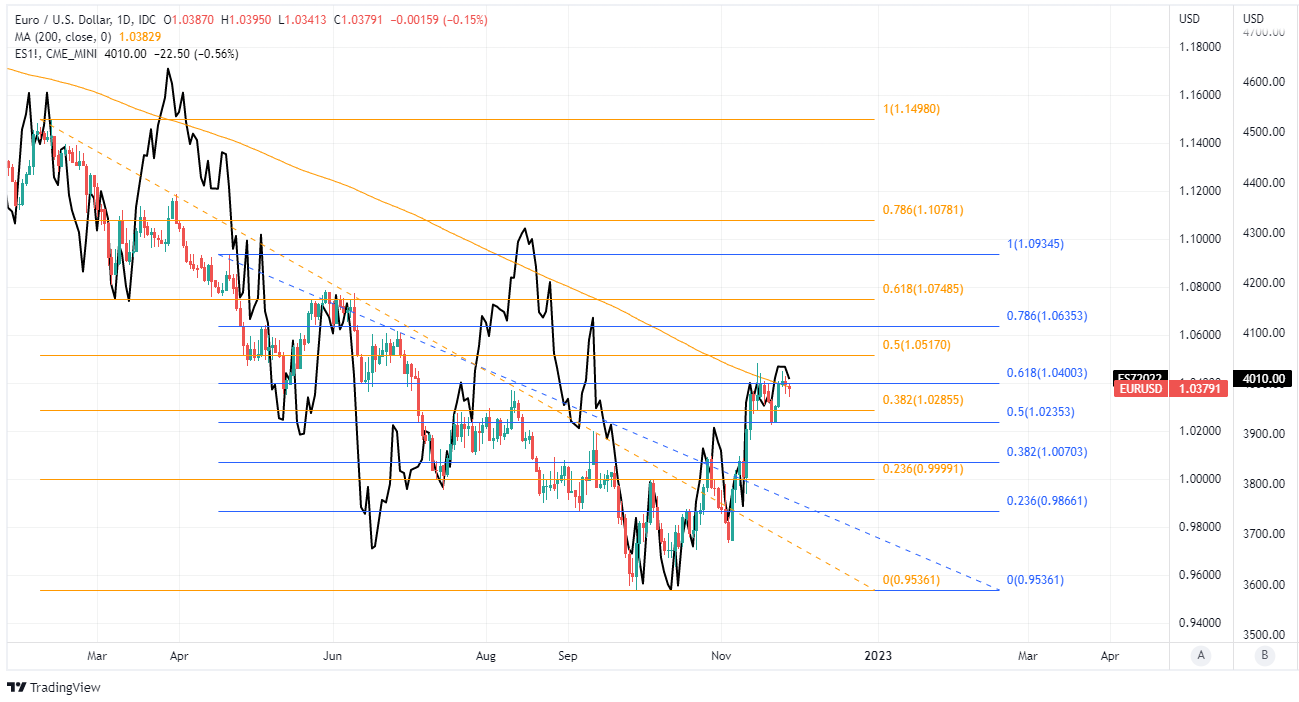 Above: EUR/USD at daily intervals with 200-day moving-average and Fibonacci retracements of April and February 2022 declines each indicating possible areas of technical resistance for the Euro. Click image for closer inspection. If you are looking to protect or boost your international payment budget you could consider securing today's rate for use in the future, or set an order for your ideal rate when it is achieved, more information can be found here.

Wednesday's inflation figures and their possible implications for the European Central Bank (ECB) interest rate outlook are the domestic highlight of the week but the single currency is also likely to be sensitive to a full slate of important economic data and other risks stemming from the U.S.

"Today’s focus will be on comments from Fed members Williams and Bullard. However, markets are likely to pay more attention to Fed Chair Powell’s comments on Wednesday," says Nikesh Sawjani, an economist at Lloyds Commercial Banking.

Wednesday's speech from Federal Reserve Chairman Jerome Powell covers "the economic outlook, inflation, and the labor market" but is a potential risk for the Euro and financial markets that celebrated earlier in November the official data that suggested U.S. inflation may now be moderating.

Such moderation would have been welcomed by the Fed but is unlikely to deter the bank from September's plan to lift interest rates further and to hold them at their peak until inflaton is well on its way back to the 2% target, which is something that could be made clear again on Wednesday.

"We would pin Chair Powell to the hawkish end of the Fed spectrum and our colleague, James Knightley, thinks Chair Powell this week could push back against the recent (and perhaps premature in the Fed's mind) easing of financial conditions," ING's Turner said on Monday. 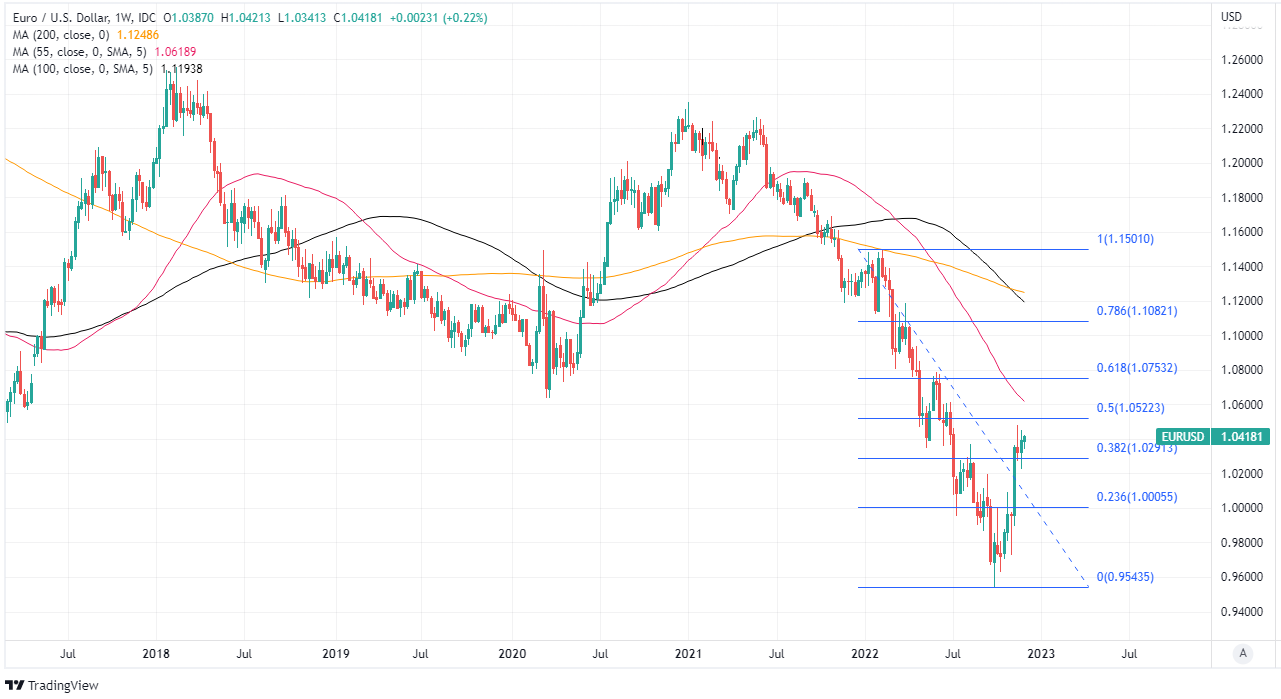 Above: EUR/USD at weekly intervals with selected moving-averages and Fibonacci retracements of 2022 decline indicating possible areas of technical resistance for the Euro. Click image for closer inspection. To optimise the timing of international payments you could consider setting a free FX rate alert here.

Chairman Powell's speech is the main event on Wednesday but will be preceded by the release of third quarter GDP data from the U.S. and followed over  the course of Thursday and Friday by the release of the Fed's preferred measure of inflation and November's non-farm payrolls report.

The danger is that Wednesday's speech from Chairman Powell hammers home the Fed's message that it intends to persist with its attempt to drive inflation back to the 2% target using its interest rate even if the economy and labour market show clear signs of deterioration along the way.

Such a message could cause upset in markets, risk aversion among investors and losses for the Euro if it comes just as U.S. data warns that interest rates and other factors are beginning to take their toll on the U.S. economy.

Friday's payrolls report may be a prime candidate for revealing signs of economic stress after corporate earnings figures released in recent weeks made clear that even some of the largest U.S. companies are now laying off workers due to the deteriorating domestic and international economic environment.

"Firms are scaling back their hiring plans and layoff announcements are rising. We think it’s likely that claims rise substantially further over the next few months, making a slowdown in payroll growth more or less inevitable," Shepherdson writes in a Monday research briefing.