Europe's single currency rallied sharply at the opening of last week with an attempted recovery of the 1.02 level amid in price action for which many analysts cited the ongoing and increasing rollback of the Russian armed forces in Ukraine where the invading army has continued to suffer losses.

But last Tuesday's U.S. inflation figures for August were a game-changer while even Thursday and Friday reminders to the market, from European Central Bank policymakers, that there may more interest rate rises in store up ahead did little more than help to stabilise the currency.

"We do not target the exchange rate, but it is something we look at very carefully. The depreciation of the euro has had a negative impact on the cost of energy in euro," Vice President of the ECB Luis de Guindos told Expresso.

"Further depreciation of the euro could be detrimental to inflationary pressures. On the contrary, if the euro stopped depreciating, this could be positive and support the fight against inflation. I hope that the recent depreciation trend is reversed in the near future," de Guindos told his interviewer João Silvestre. 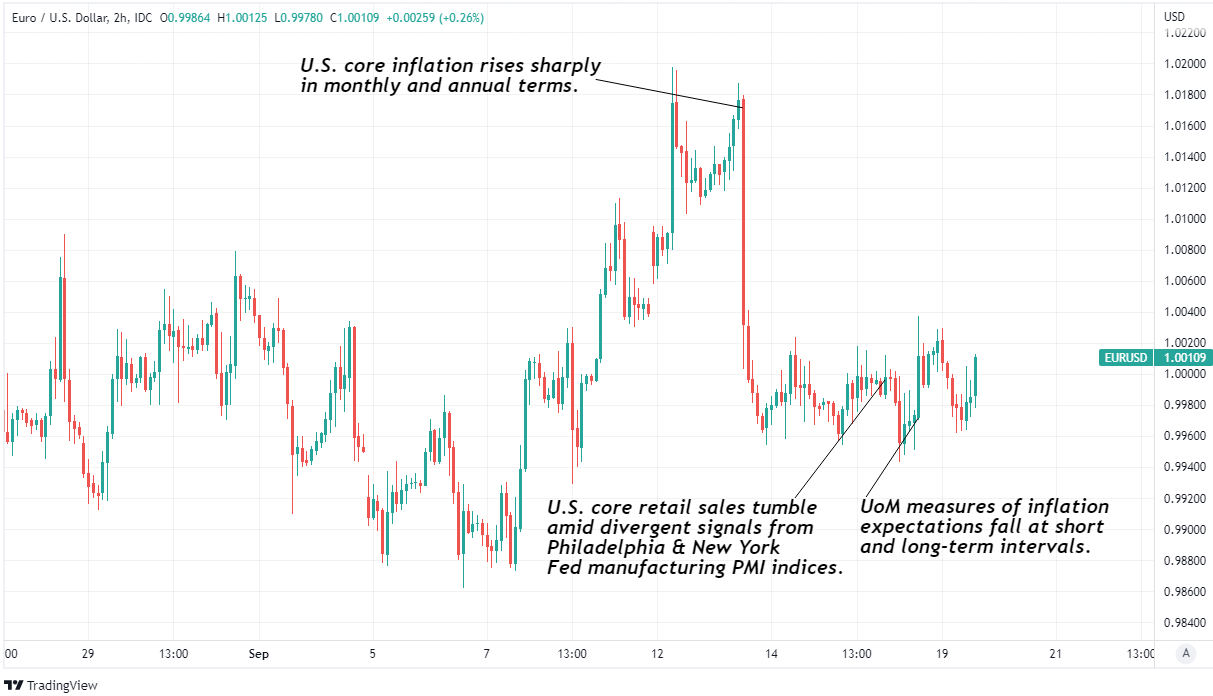 Above: Euro to Dollar rate shown at 2-hour intervals.

The ECB's de Guindos explained that "more hikes might come in the next few months" but that these would depend on the economic data emerging from the Eurozone, while acknowledging that returning an almost double-digit inflation rate to its target could come at a cost to European economies.

These remarks were an expanded version of those made by President Christine Lagarde in September's policy press conference, and were similar to last Wednesday's from ECB chief economist Philip Lane, who addressed a Meeting of the Money Market Contact Group.

"Based on our current assessment, we expect that this transition will require us to continue to raise interest rates over the next several meetings. This policy path will dampen demand and guard against the risk of a persistent upward shift in inflation expectations. We will regularly re-evaluate our policy path in light of incoming information and the evolving inflation outlook," he said in one part.

"At the same time, it is crystal clear that the appropriate monetary policy for the euro area should continue to take into account that the energy shock remains a dominant driving force of inflation dynamics and the general economic outlook, including through the impact of the very significant terms of trade deterioration," he also later added.

The Euro climbed tepidly back to parity following the above remarks and demonstrated resilience to a rampantly strong Dollar but will likely take its cues this week from a Tuesday speech from ECB President Christine Lagarde, Wednesday's Fed decision and Friday's release of S&P Global PMI surveys. 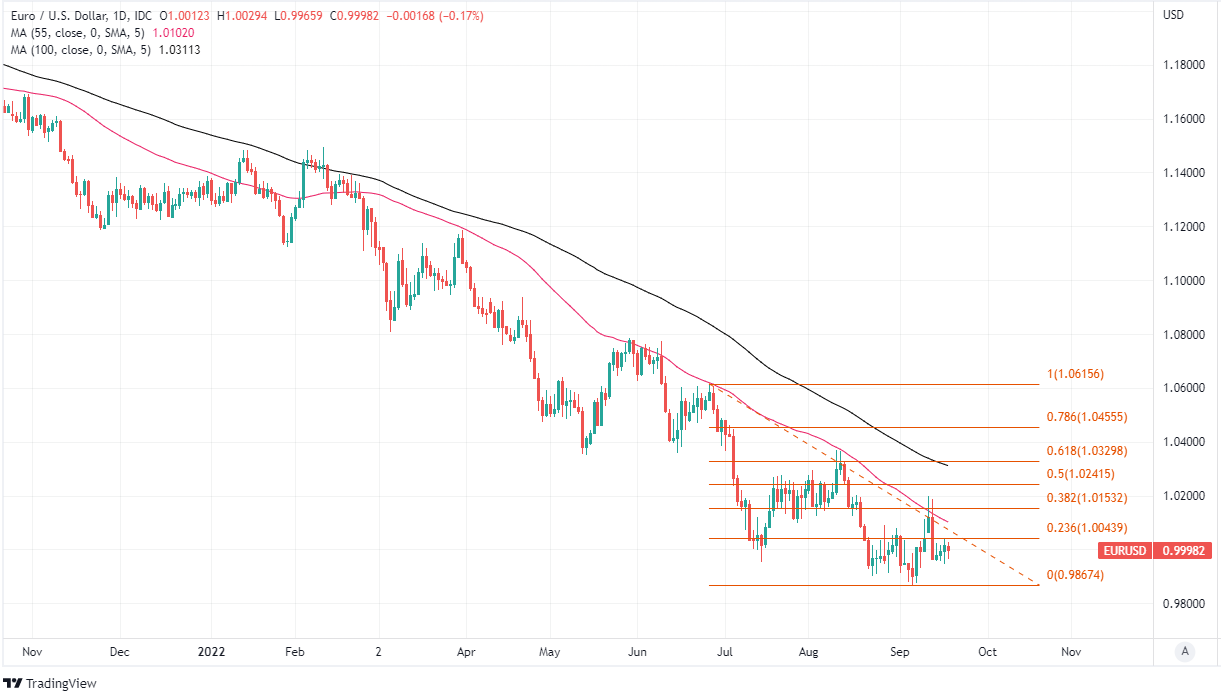 President Lagarde speaks at the Frankfurt Society for Trade, Industry, and Science at 18:00 on Tuesday ahead of what will be an important point for the U.S. Dollar outlook.

"We are keeping our expectation for the peak in the fed funds rate upper bound at 4% by December, for the time being. While last week’s inflation print surprised markets, it was broadly in line with our expectation, and we continue to see signs of cooling in demand in many parts of the economy (for instance, retail sales last week suggested that real goods consumption is now broadly back at trend levels)," says Bill Diviney, a senior economist at ABN Amro.

"Combined with falling commodity prices, the strong dollar, and easing global supply bottlenecks, we continue to expect inflation to fall substantially during the first half of 2023. This, alongside rising unemployment and a fall in the job vacancy ratio should give the Fed the confidence that it is on track to returning inflation back to target. However, the Fed will not want to signal any shift until we see convincing evidence of this in the data," Diviney said on Monday.

Almost all forecasters expect the Fed to lift its interest rate by 0.75% to 3.25% on Wednesday and pricing in interest rate derivative markets suggests the decision is a toss up between a 0.75% increase and an exceptional 1% uplift, which would take the top end of the Fed Funds rate range to 3.5%.

This is after last Tuesday's U.S. data showed both overall and core inflation rates accelerating in month-on-month terms in August and at a point when Federal Open Market Committee forecasts had assumed that inflation would be in the midst of an unambiguously clear decline. 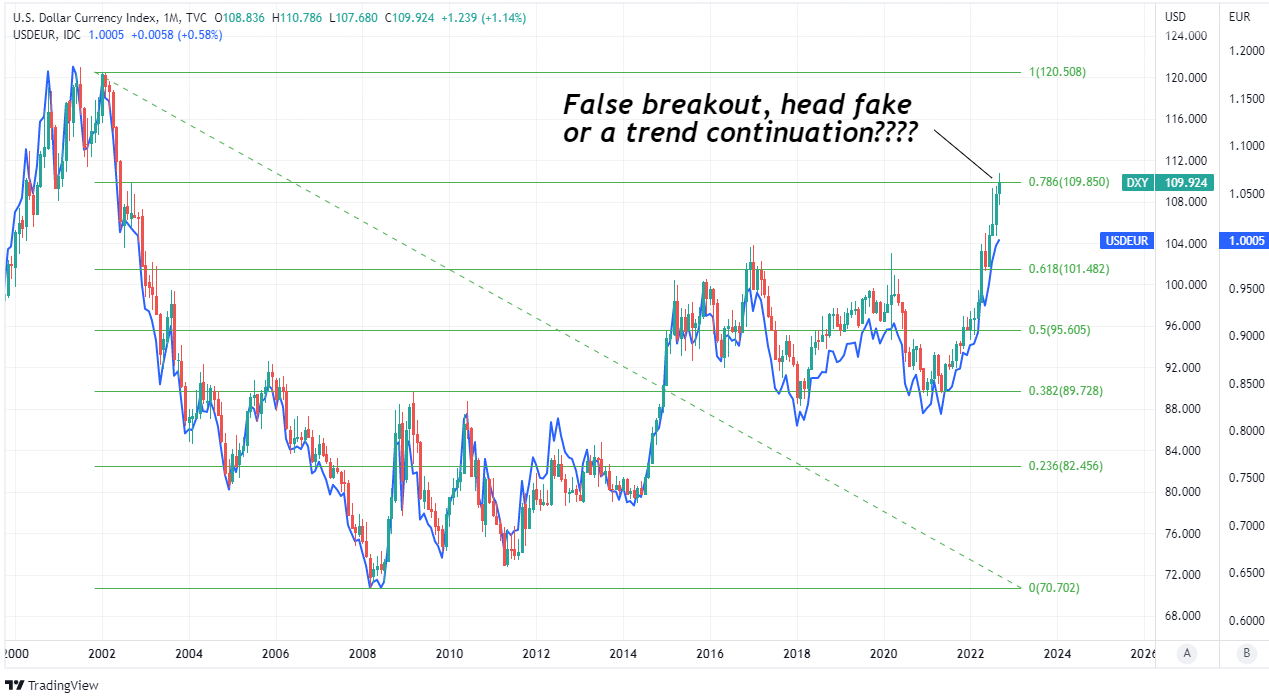 The author suspects the Fed will do something different to what the market imagines, however, by lifting rates straight to whatever the currently-estimated 'terminal rate' is, as this would be most consistent with the various officials who've recently cited 1980s Fed Chairman Paul Volcker's approach as an appropriate model for dealing with inflation

This would effectively mark an intermittent end to the interest rate cycle, however, which is something that could see the market rethinking speculative bets on the Dollar with potentially very positive implications for the Euro.

The Euro-Dollar rate had fallen almost 12% for 2022 by Monday and while there have been many other factors behind that decline including the economic fallout from the invasion of Ukraine, Fed policy has also been a significant driver of losses while the Euro has remained one of the market's biggest 'short' positions.

There aren't any analysts or economists who envisage this outcome, however, and the Euro is also likely to be sensitive to the details of S&P Global PMI surveys of the manufacturing and services sectors on Friday, which have mainly been harbingers of bad news for the single currency this year.

"Firm gains Friday have failed to hold and spot continues to press support at 0.9950, ahead of a renewed test of the upper 0.98s. Look for more range trading around 0.9950 in the short run but, absent a clear move through 1.02, the EUR will retain a weak bias," says Juan Manuel Herrera, a strategist at Scotiabank. 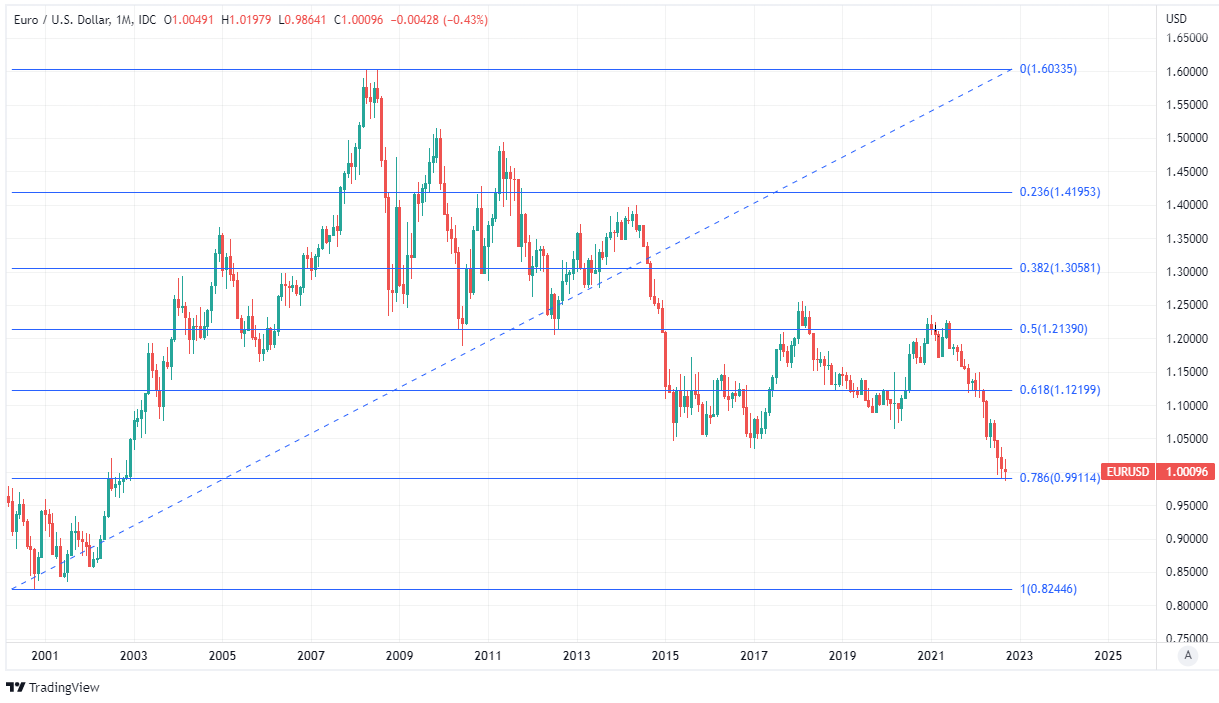