The Euro to Dollar exchange rate has been unable to escape from near the bottom of its recent trough and entered the new week at risk of further losses that could see the single currency slipping toward some of its lowest levels since the opening half of 2017 over the coming days.

Europe’s single currency was lifted repeatedly last week as well as on Friday ahead of the weekend by statements from European Central Bank (ECB) policymakers suggesting the timing of an initial increase in Eurozone interest rates is likely drawing closer.

ECB Governing Council member François Villeroy de Galhau said on Friday said Frankfurt could lift its negative deposit rate of -0.5% “into positive territory” by year-end while executive board member Isabel Schnabel had suggested on Monday that an initial uplift could come as soon as July.

The EUR/USD exchange rate was unable to sustain either of its attempts at recovery, however, and could now be at risk of extending its recent run of losses with a break beneath the 1.05 handle over the coming days.

“There’s little of note on the Eurozone calendar over the next couple of weeks aside from ECB speeches, but markets seem to be in a safe spot for ECB hike bets,” says Juan Manuel Herrera, a strategist at Scotiabank. 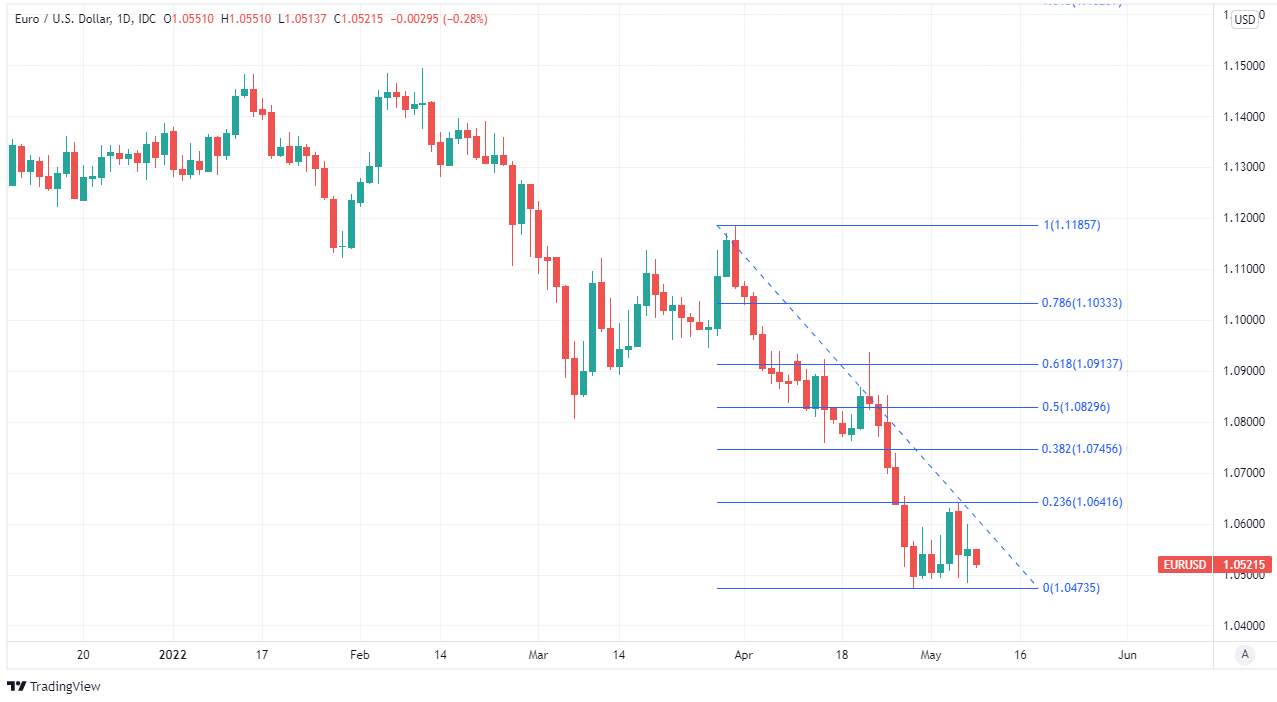 “The EUR’s technical picture continues to point to further losses into the 1.04s after this seven-session consolidation period. The EUR’s range trade (mostly confined between 1.05 and 1.06) has helped it come out of oversold on the RSI,” Herrera and colleagues warned on Friday. (Set your FX rate alert here).

The Euro has been hamstrung in its ability to recover against the Dollar due to elevated U.S. bond yields and economic risks associated with the European Union’s currently stalled push toward a Russian oil embargo, although the single currency faces fresh and further headwinds this week also.

This is after China’s Premier Li Keqiang was widely reported at the weekend to have called a step-up in authorities’ efforts to save jobs and support households as they grapple with the fallout from coronavirus containment measures in major metropolitan hubs including Shanghai and Beijing.

“The employment situation is deteriorating along with the rest of the economy. All of April’s PMIs point to rising unemployment, despite government promises of support for firms hit by zero-Covid policies,” says Craig Botham, chief China+ economist at Pantheon Macroeconomics.

The deteriorating economic backdrop and government’s growing desire to support Chinese growth is a downside risk to the Renminbi and upside risk for the USD/CNH pair which, in turn, implies ongoing headwinds for many other currencies relative to the U.S. Dollar including the Euro. 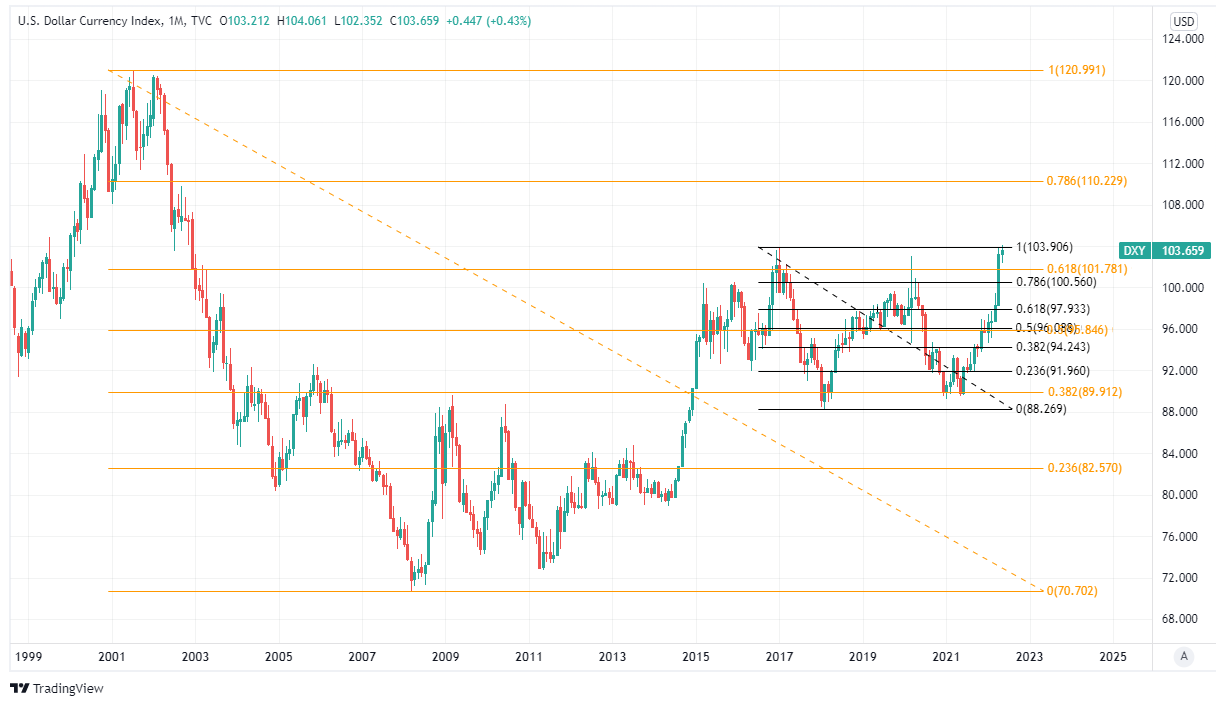 Above: U.S. Dollar Index with Fibonacci retracements of 2001 and 2017 downtrends indicating prospective areas of short and medium-term technical resistance to any further Dollar rally. Click image for closer inspection.

To the extent that these factors add further to the baggage around the Euro-to-Dollar rate’s ankles, they could be enough to see the single currency slipping beneath the 1.05 handle and in the direction of 2017 lows around 1.0344 during the opening stage of the week ahead.

“The EUR has already faced more downward pressure than we expected, but we find it hard to see a silver-lining for the single currency at this stage. We therefore change our forecasts to reflect a more bearish view, and see EUR-USD moving to parity in the year ahead,” says Dominic Bunning, head of European FX research at HSBC.

Bunning downgraded HSBC's forecasts last week and now expects the Euro to reach 1.03 by the end of June and parity in the early months of next year.

International factors are likely to be the dominant influence on the Euro-Dollar rate throughout the coming week for which the Eurozone calendar is devoid of major appointments, while the highlight is likely to be Wednesday’s release of U.S. inflation data for April.

“EUR/USD can remain heavy this week as the USD strengthens. There are no important economic data scheduled in the Eurozone this week," says Joseph Capurso, head of international economics at Commonwealth Bank of Australia. 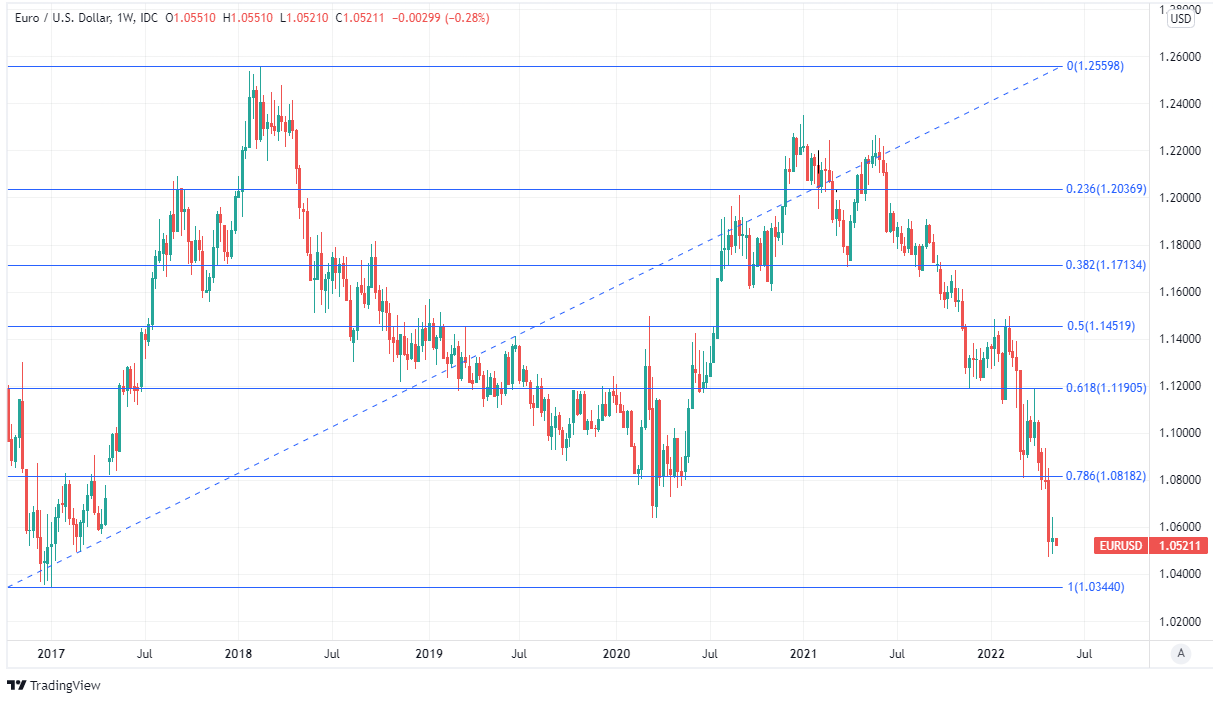 Above: Euro to Dollar rate shown at weekly intervals with Fibonacci retracements of 2017 rally indicating possible medium-term areas of technical support for the Euro and resistance for the Dollar. Click image for closer inspection.

“We estimate US headline and core CPI inflation remained very high at 8.2%/yr and 6.2%/yr respectively in April.  The need to tighten financial conditions and rein in inflation underlies the case for significant further increases in the Funds rate,” Capurso and colleagues said on Monday.

Some measures of consensus suggest economists generally expect the more important rate of core inflation to have accelerated from 0.2% to 0.4% in month-on-month terms in the U.S. during April in what would be a blow for those in the market who may be looking for signs of inflation topping out.

A crest in the annual rate of U.S. inflation is in turn crucial if the Federal Reserve is to be kept from raising its interest rate at the kind of pace that was at least temporarily ruled out in its May monetary policy decision last week, which is in turn a key determinant of the outlook for the U.S. Dollar.

As I say we’ve got two months now where core inflation is a little lower but we’re not looking at that as a reason to take some comfort. I think we really need to see that our expectation is being fulfilled. That inflation is under control and starting to come down,” he added in the Wednesday press conference.