The Euro to Dollar exchange rate entered the new week close to five-year lows following a dire April but could attempt a corrective rebound in the days ahead if the Federal Reserve (Fed) kicks a quantitative tightening can down the road into the summer months.

Europe’s single currency bounced back above the 1.05 handle ahead of the holiday weekend but remained underwater by more than four percent against the U.S. Dollar for the month of April following another week in which domestic and international factors both weighed heavily on the Euro-Dollar rate.

“Possible explanations for the worse-than-expected Euro performance include ongoing equity outflows from the region, wider sovereign spreads, and renewed investor focus on potential disruptions to energy prices from the war in Ukraine,” says Zach Pandl, co-head of foreign exchange strategy at Goldman Sachs.

“There are admittedly several factors that skew near-term risks to EUR/USD to the downside—including the Russia-Ukraine conflict, but also the risks of even faster Fed rate hikes and pressure on global equities, as well as covid-related disruptions to China’s economy,” Pandl and colleagues also said Friday.

Goldman Sachs says the single currency could continue to struggle for as long as the above risks overshadow the outlook for the Eurozone while the bank's newly-downgraded forecasts suggest it could take six months for the Euro climb back to its March level of 1.10, from its present depth of 1.05. 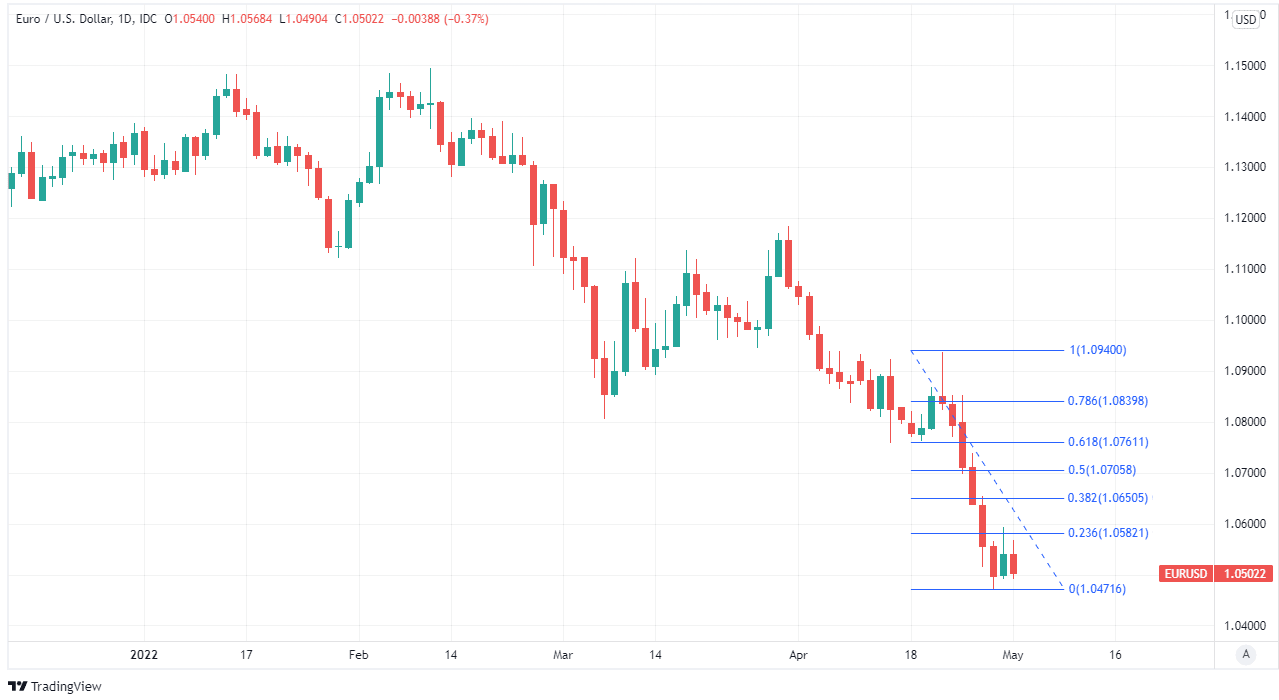 While the Euro would have to traverse a lengthy road to reverse the -7.4% loss sustained thus far in 2022, it could enjoy some form of respite later this week if Wednesday's Fed decision has the effect of pushing back against the recent relentless surge in U.S. bond yields.

“We see scope for the US dollar to strengthen further through this phase of 50bp rate increases (May/June for sure) but the scale of strength from here is certainly more limited now,” says Derek Halpenny, head of research, global markets EMEA and international securities at MUFG.

"Spreads have been a key driver and looking at 2yrs of data and EUR/USD has now overshot its implied level based on the moves in 2yr spreads," Halpenny and colleagues said in a Friday look at the week ahead, the highlight of which is Wednesday's Fed policy decision. (Set your FX rate alert here).

U.S. yields would potentially be stifled with the gap between them and their European counterparts improving if the Fed defers this Wednesday a widely anticipated start of the quantitative tightening (QT) process intended to shrink its near $9 trillion worth of government and mortgage bond holdings.

The Fed confirmed in March that this process could begin as soon as May but Chairman Jerome Powell also said "we’ll be mindful of the broader financial and economic contexts when we make the decision on timing," and since then some parts of the currency market may have given reason to hesitate. 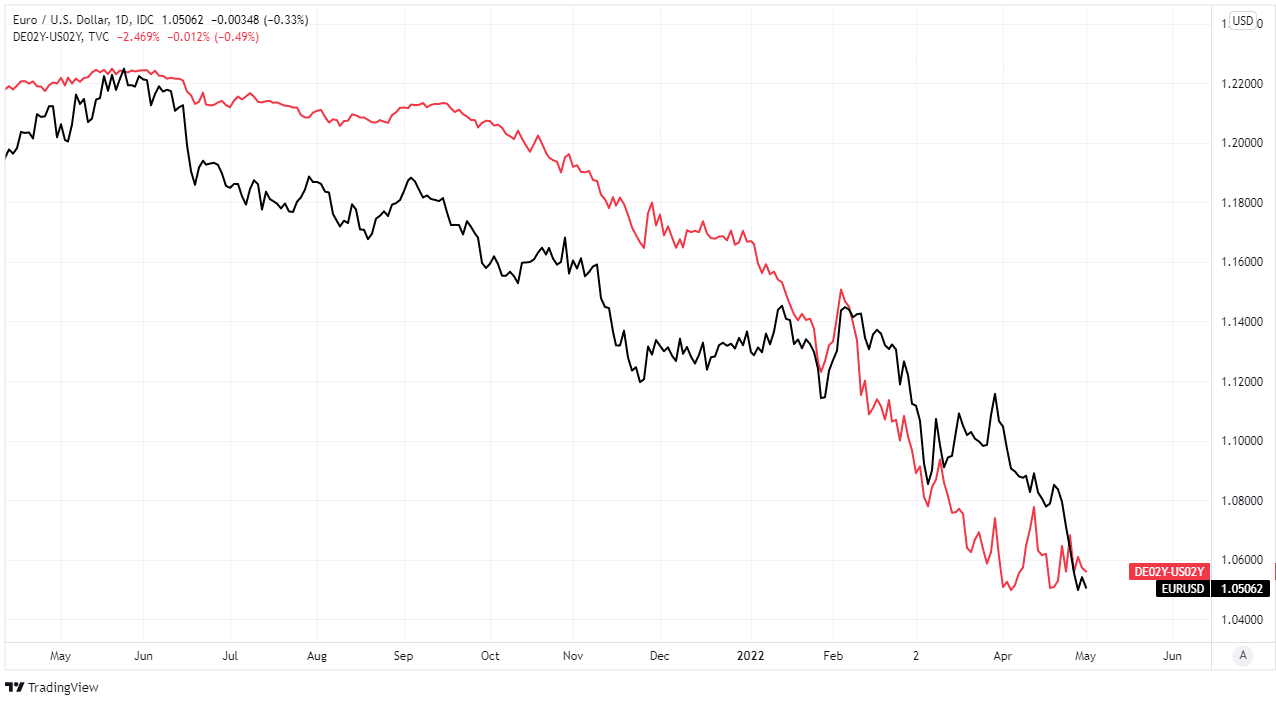 Above: Euro to Dollar rate shown at daily intervals with spread - or gap - between 02-year German and U.S. government bond yields. Click image for closer inspection.

"The key for the market will be any guidance on the likely pace of tightening going forward," says Daragh Maher, Americas head of FX strategy at HSBC.

"If, for example, the Fed were to signal that the accelerated pace might reduce how far rates might ultimately need to go, then the USD would likely weaken. By contrast, if the tone suggested a 50bp could be the new normal until the data dictated otherwise, then the USD could capitalise," Maher said on Monday.

With the Fed decision and a raft of important U.S. economic figures aside, the highlight of this week for the Euro is likely Wednesday's release of Eurozone retail sales figures for March, which will be scrutinised closely by the market given they cover the first full month to follow Russia's invasion of Ukraine.

The resilience of consumer spending and overall household demand in the face of significantly increased costs of energy, food and some manufactured goods could ultimately have a meaningful influence on European Central Bank (ECB) monetary policy in the months ahead.

"Wednesday’s retail sales for March could be weaker than expected based on the UK’s retail report. UK retail sales unexpectedly fell in March,” says Joseph Capurso, head of international economics at Commonwealth Bank of Australia. 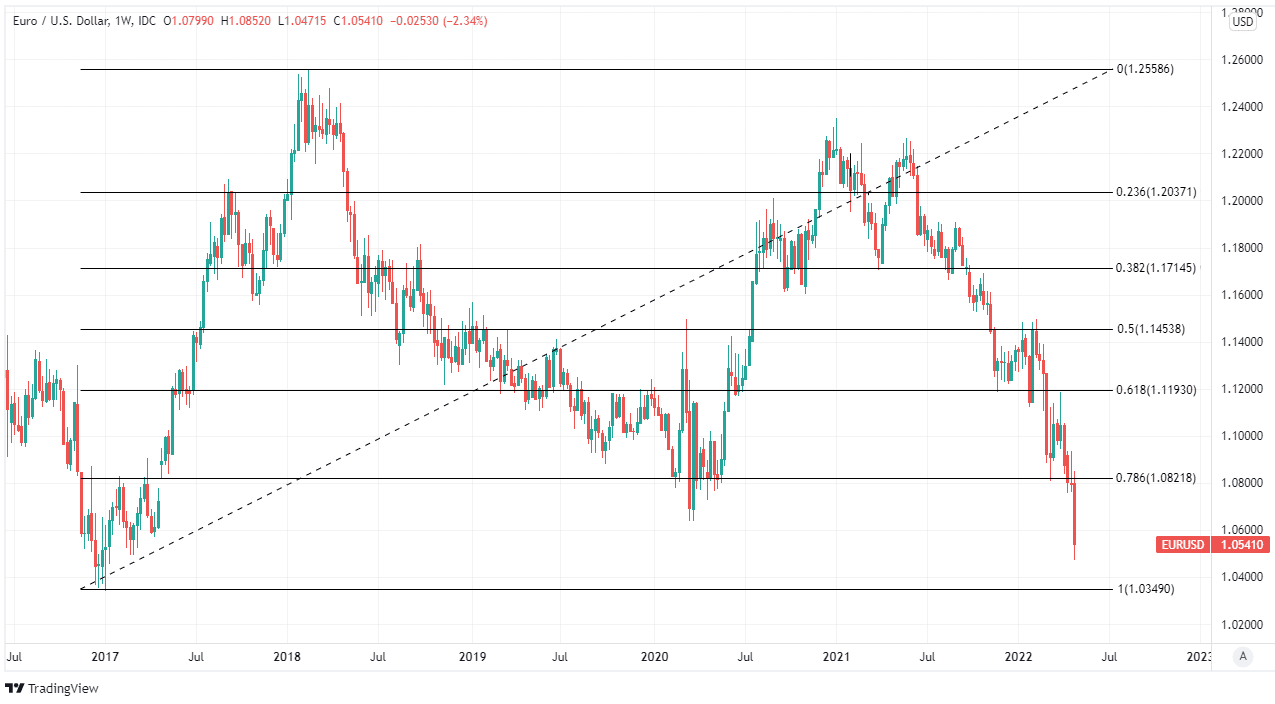 Above: Euro to Dollar rate shown at weekly intervals with Fibonacci retracements of 2017 rally indicating possible medium-term areas of technical support for the Euro and resistance for the Dollar. Click image for closer inspection.

"EUR/USD received only modest support from the stronger than expected acceleration in the Eurozone’s core CPI for April on Friday. EUR/USD could break through downside support at 1.0472 this week," Capurso added.

Last month saw the ECB bring forward to next quarter the time at which it expects to end the its last quantitative easing programme and explicitly acknowledged that runaway inflation could leave it with little choice but to raise Eurozone interest rates for the first time since 2011 as soon as this July.

“In my opinion, there’s no reason why this shouldn’t happen in July. Rates will rise after that. Exactly how long after has not been decided. It could be months, weeks or days. July is possible, but that’s not to say it’s likely,” Vice President Luis de Guindos said in an interview with El Correo last Thursday.

This is yet to stem the Euro to Dollar rate's losses, however, which have been heavily influenced by the growing strength of the Dollar, a deteriorating economic outlook in China and renewed financial market concerns about the security of Europe's energy supply most recently.

“Judging by the recent remarks from Philip Lane and President Lagarde, the weak EUR is a concern for the ECB. But if policymakers aren't willing to use their policy tools to support the currency, a slower Fed tightening cycle or the USD hitting its peak for the cycle are amongst the ECB's best routes to eliminating the weak EUR as an added source of upside inflation risk,” says Stephen Gallo, European head of FX strategy at BMO Capital Markets.