Russia is moving into the sphere of energy wars, and this can only weigh further on the Euro says investment bank MUFG.

Analysts at MUFG say the ongoing declines in the value of the Euro are linked to energy politics, with Russia's decision to axe supplies to Poland and Bulgaria this week reinforcing weakness.

"A wider cutoff would have a significant negative impact on sentiment and would have further negative consequences for the euro," says Halpenny.

The Euro fell to its lowest level in five years Thursday in the wake of news of Russia's decision to stop gas flows to Bulgaria and Poland, while threatening similar action against other countries that refuse to pay in Rubles.

The Euro to Dollar exchange rate fell to a low of 1.0408 on Thursday as a sell-off in the single currency entered a 6th consecutive day.

The Euro to Pound exchange rate fell back to 0.8388 after an attempted rebound stalled, giving a Pound to Euro conversion of 1.1919. (Set yor FX rate alert here).

Economists at MUFG estimate a wider cut off of gas supply could see prices double from yesterday’s close to around EUR 200 MWh.

Russia said the decision to block gas supplies to Poland and Bulgaria was a result of the refusal of the two countries to pay for gas in Rubles and that similar measures would be taken against other countries that do the same. 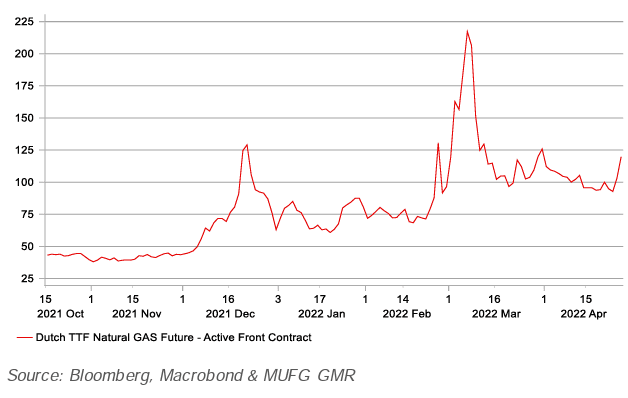 But it is reported today EU energy groups are prepared to meet Russian president Vladimir Putin’s demands that Russian gas be paid for in Rubles.

The FT reports gas distributors in Germany, Austria, Hungary and Slovakia are planning to open rouble accounts at Gazprombank in Switzerland in order to satisfy a Russian requirement for payments in its own currency, according to people with knowledge of the preparations.

Despite these headlines the outlook for the Euro-Dollar is currently pointed lower.

MUFG says the long-term trendline support from the lows in 2000, 2001 and in 2020 have now been breached, leaving the technical backdrop to reinforce the negative fundamental backdrop.

"Talk of EUR/USD reaching and possibly breaching parity even just a few weeks ago seemed a tall order but the declines now on this potentially damaging development means such a scenario is no longer such a tall order," says Halpenny.