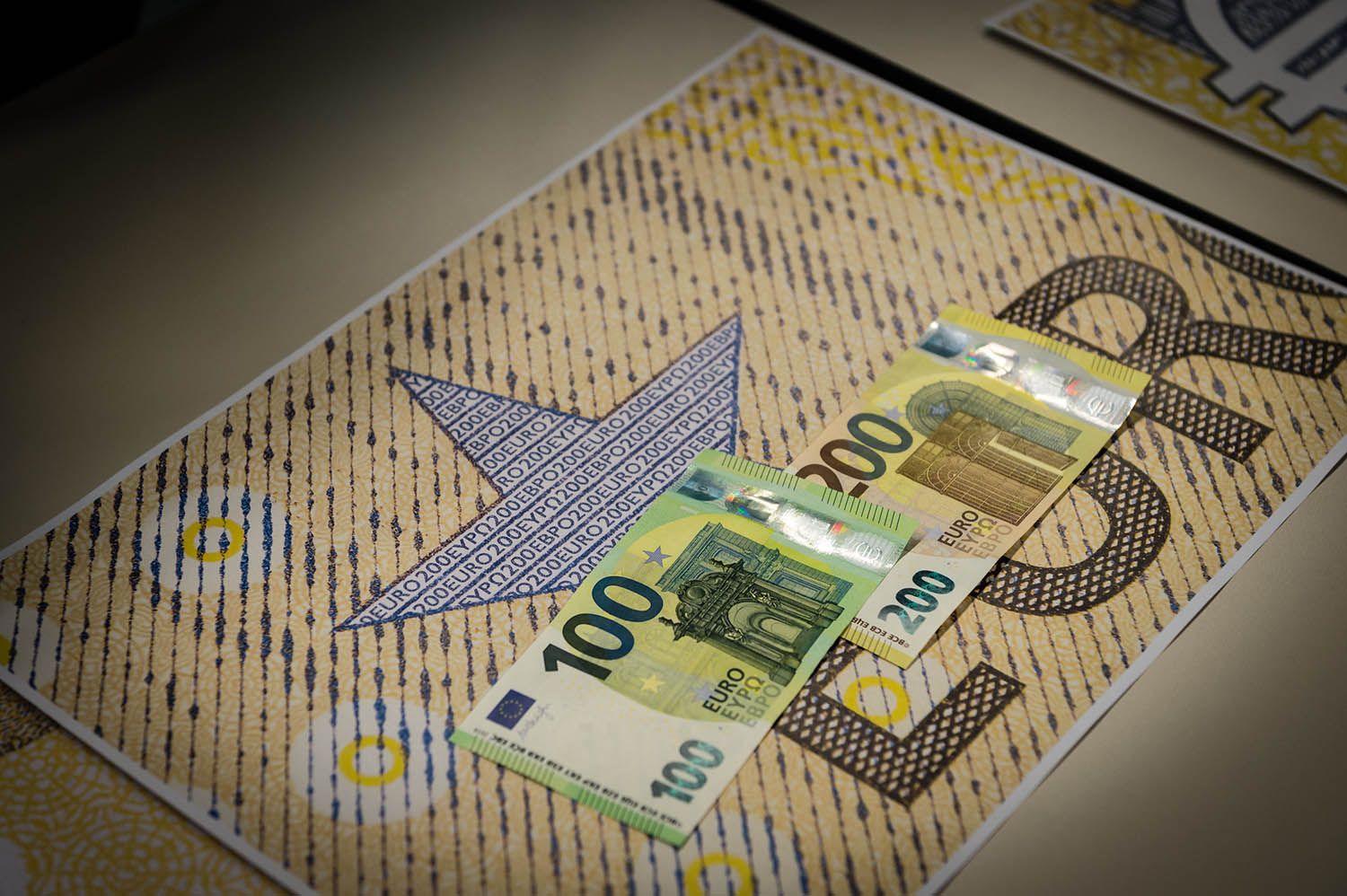 The Euro to Dollar exchange rate recovered further off two-year lows last week but with multiple layers of resistance looming overhead on the charts, the single currency could struggle to extend its recovery by much beyond 1.1150 over the coming days.

Europe’s single currency has risen sharply against many major counterparts in the last week as global markets rallied with investors’ optimism about peace talks between Russia and Ukraine as well as the resulting declines in oil and gas prices.

“The ability of the EUR to hold its gains will depend on the course of the war in Ukraine and on the chances that the Eurozone will avoid energy shortages and recession,” says Jane Foley, head of FX strategy at Rabobank.

“We maintain that the value of EUR/USD is set to remain lower this year than it would have been without the conflict and energy uncertainties. However, if the Eurozone can avoid recession, it is likely that the EUR can hold a 1.09 to 1.11 range in the coming months,” Foley said on Friday.

Lower energy costs and improved global market risk appetite helped the Euro rise briefly back above 1.11 last week but didn’t give it enough momentum to overcome the layer of Fibonacci resistance levels that litters the charts from around 1.1150 and upward. 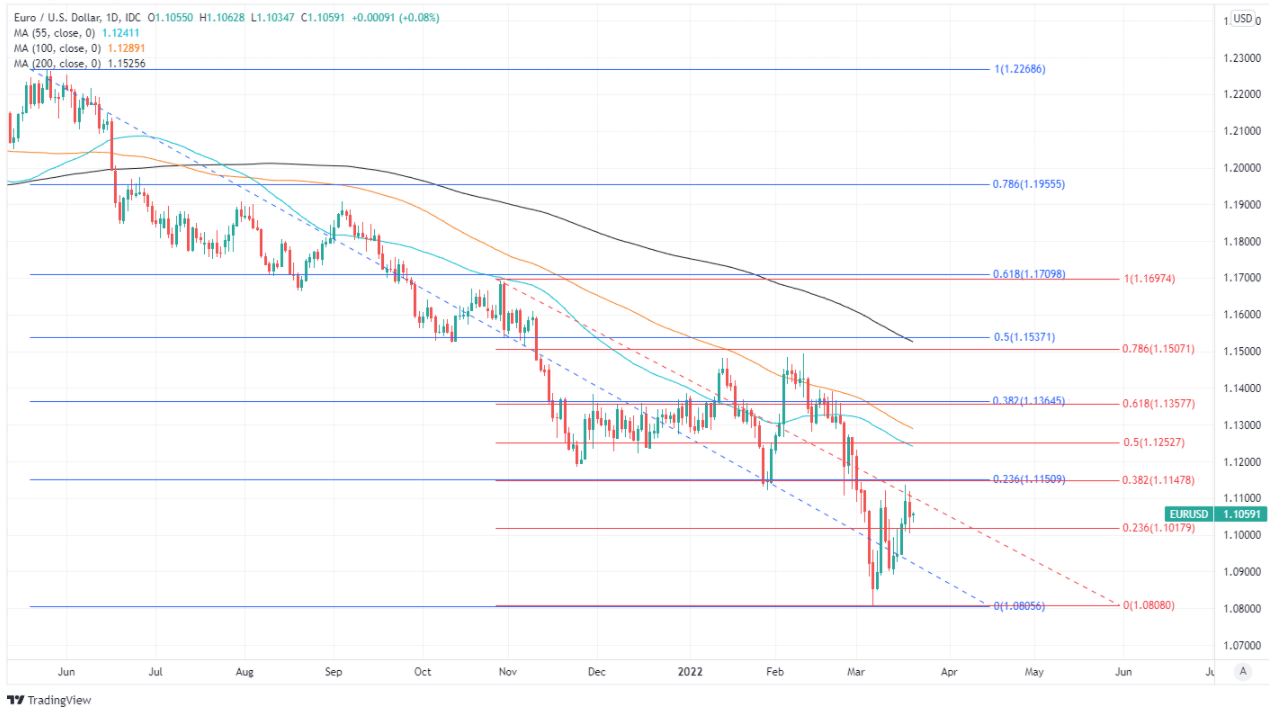 Above: Euro to Dollar rate shown at daily intervals with Fibonacci retracements of late November and June 2021 decline indicating possible areas of medium-term technical resistance to any recovery by Euro. Click image for closer inspection.

Those latter levels could potentially act as an impediment to any further attempts at recovery by the Euro over the coming days when the single currency will again be sensitive to the trajectory of oil and gas prices.

“Encouraging developments in Ukraine may keep risk assets and pro-cyclical currencies supported, although the rally in European currencies is starting to look a bit tired,” says Chris Turner, global head of markets and regional head of research for UK & CEE at ING.

“After all, a military de-escalation may not be enough to bring energy prices materially lower or dramatically reduce the overall economic impact on Europe’s growth outlook,” Turner and colleagues said in a Monday note.

Europe’s high dependency on imported energy means continental currencies including the Euro would be among the most susceptible this week to any renewed strength in oil and gas prices, which are themselves highly responsive to developments in and around Ukraine.

But the short-term outlook for the Euro also likely depends on the market’s interpretation of Tuesday’s address from European Central Bank President Christine Lagarde at the Bank for International Settlements Innovation Summit, and reading of Thursday’s IHS Markit PMI surveys.

“An easing in energy prices from the recent peak can push EUR up above 1.1200 this week. The flash PMI’s for March are the main downside risk to EUR this week (Thursday),” says Joseph Capurso, head of international economics at Commonwealth Bank of Australia.

Much about the outlook for the Euro is also hinged on if the market rediscovers its appetite for the Dollar following last week’s declines, which continued even after what was widely perceived as a ‘hawkish’ policy statement from the Federal Reserve.

The Fed raised its interest rate for the first time since 2018 last week and indicated using its dot-plot of policymakers’ forecasts that the benchmark could rise to somewhere between 2.5% and 3% over the next year. 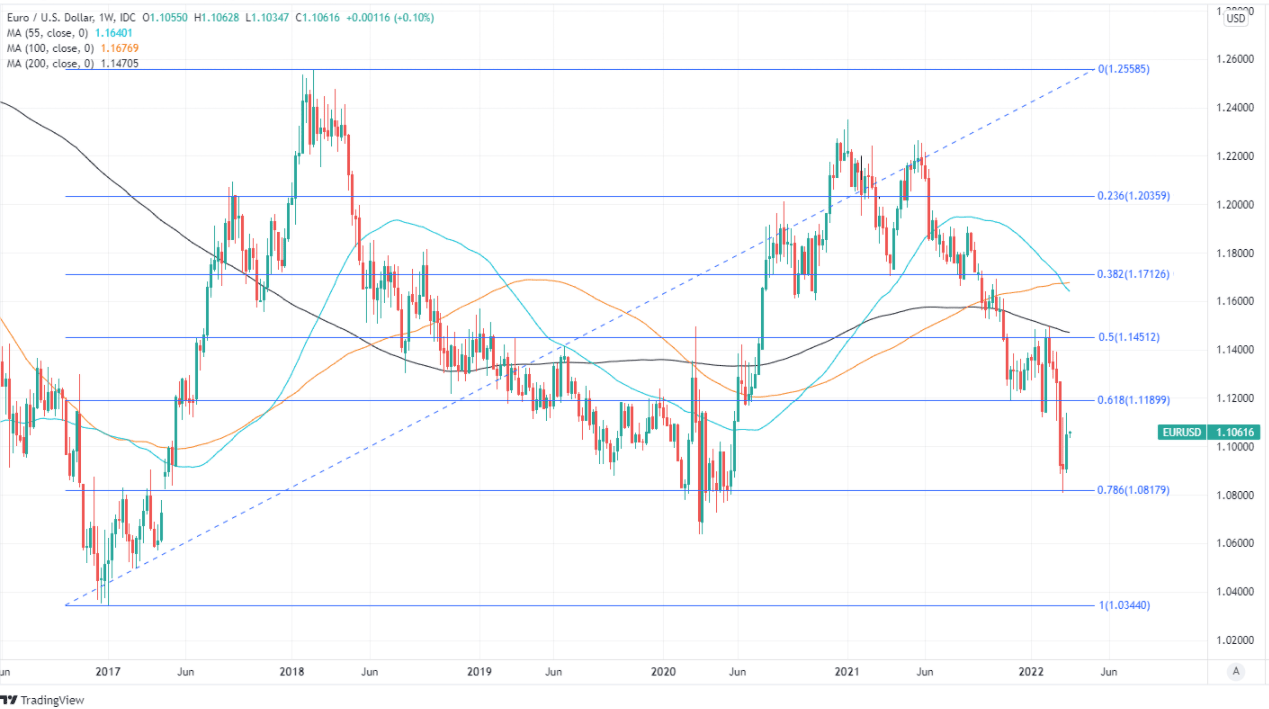 Above: Euro to Dollar rate shown at weekly intervals with Fibonacci retracements of 2017 rally indicating possible areas of medium-term technical support for the Euro. Click image for closer inspection.

“The Fed has just started tightening, while we expect the ECB to be cautious as long as the war continues. Uncertainty from the war and high energy prices are much more negative for the Eurozone than for the US. Our EURUSD forecasts for 2022 is 1.05,” Vamvakidis and colleagues said on Friday.

Chairman Jerome Powell will be listened to closely this week after telling a press conference last Wednesday that Fed policymakers are open to the idea of “frontloading” the envisaged increases in interest rates, meaning they could be announced sooner and faster than financial markets anticipate.

The risk of this happening is a supportive factor for the greenback that could also limit any further recovery by the Euro-Dollar rate in the weeks ahead.

“Lagarde, Nagel, Villeroy and a few other ECB officials also speak this week, although given the recency of the bank’s decision and a still uncertain environment it is unlikely that they will provide much support for the EUR,” says Juan Manuel Herrera, a strategist at Scotiabank.