The Euro to Dollar exchange rate is attempting to stabilise above a recently-recovered support level at 1.1290, although local coronavirus developments and the hawkish stance of the Federal Reserve (Fed) may limit its scope for recovery in what is a quiet week ahead for the Eurozone economic calendar.

Europe’s single currency climbed back above and held onto a major technical support level around 1.1290 early on last week, which could now be set to act as a pivot point for the Euro-Dollar rate outlook over the coming weeks into year-end.

EUR/USD had previously slipped to new 2021 lows beneath the round number of 1.12 before discovery of the latest mutated strain of the coronavirus ignited a bonfire of risk assets and currencies in late November, triggering a wave of automatic demand for low yielding funding currencies.

“Omicron triggered sharp unwinds of FX funding trades which involved shorts in both JPY and EUR. This was most prominent against risk correlated currencies, such as AUD,” says Tim Riddell, a London-based macro strategist at Westpac.

“EUR/USD may experience another interim squeeze towards 1.14, but our bias will be for a retest of 1.1200, if not the 1.1000-50 area, in advance of the ECB meeting,” Riddell and colleagues wrote in a research briefing last Thursday. 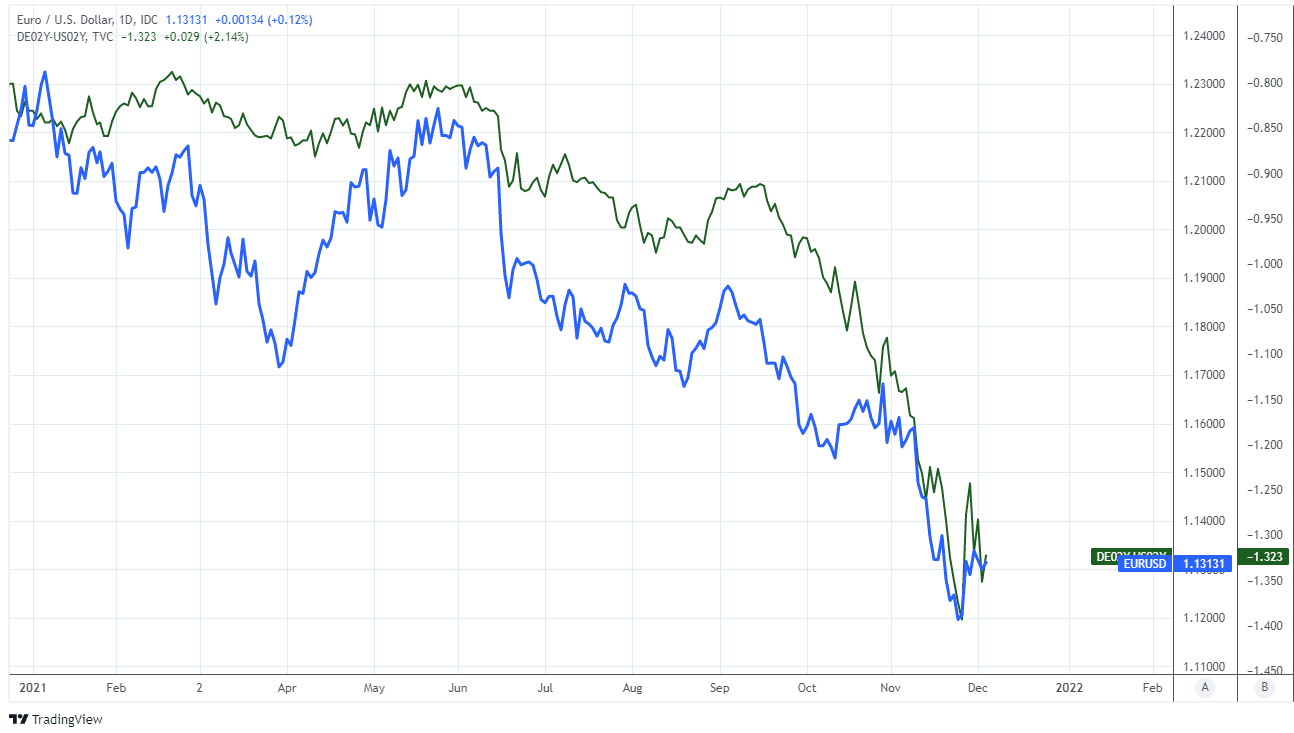 Above: Euro-Dollar rate shown at daily intervals alongside spread, or gap between yields on 02-year German and U.S. government bond yields.

With the Euro being sold heavily earlier in the year by investors seeking to fund bets on higher yielding currencies or simply those offering greater return prospects for other reasons, it was one of the first and foremost to benefit when investors began taking risk off the table in late November.

While those global market factors have been instrumental in rescuing the single currency from the land down underneath the 1.12 handle, they were not the only driver of the Euro’s recent performance as last week’s Eurozone inflation figures also appeared to have some sway.

“Eurozone inflation surprised strongly to the upside this week, with core inflation at 2.6%. While this is still well below the US core inflation of 4.6%, it does point to risks of persistent Eurozone inflation,” says Athanasios Vamvakidis, head of FX strategy at BofA Global Research, who forecasts the Euro-Dollar rate to end the year at a slightly higher level of around 1.1400.

Last Tuesday’s data showed Eurozone inflation reaching a record high in November, leading to a surge some European government bond yields that outstripped even that seen in the shorter maturity part of U.S. government bond market where yields have been lifted sharply by a further hawkish shift in the policy stance of the Federal Reserve.

“This still doesn't justify market expectations for at least one rate hike next year. The ECB won't rush to end QE in H1 2022—a precondition for rate hikes—especially given the recent surge in virus cases and discovery of Omicron,” cautioned Claus Vistesen, chief Eurozone economist at Pantheon Macroeconomics, writing in a note to clients on Friday.

Rising relative bond yields appeared to lift the Euro last Tuesday but the rub for the Euro-Dollar rate going forward is that too few in the market expect the European Central Bank (ECB) to respond to current high levels of inflation by changing its monetary policy settings.

ECB President Chrtistine Lagarde loaned weight to this notion on Friday when telling Reuters that these price pressures would be likely to subside of their own accord next year.

Meanwhile, and even before the latest mutation of the coronavirus was first detected in late November, Eurozone governments were already throwing their economies back into varying degrees of ‘lockdown’ due to a trend of escalating infections that could only be encouraged by the newest strain.

“New measures imposed across the region to tackle the latest virus wave also bodes ill, and is likely to weigh on sales in December too. Germany's government announced last Thursday unvaccinated people are banned from entering shops, starting this week, unless they are recently recovered from the virus. This means that around 30% of the population now can't visit shops, less than three weeks before Christmas,” Pantheon’s Vistesen also said.

European countries including Austria, Latvia, Slovakia and the Netherlands have returned to either full or partial ‘lockdown’ in recent weeks following earlier unsuccessful attempts at stemming the rise in new infections using less damaging containment measures.

Meanwhile Belgium, Italy, France and Germany have recently imposed all manner of other restrictions that also serve to dampen the Eurozone economic outlook even if those countries have stopped short of business closures and limitations on social contact. 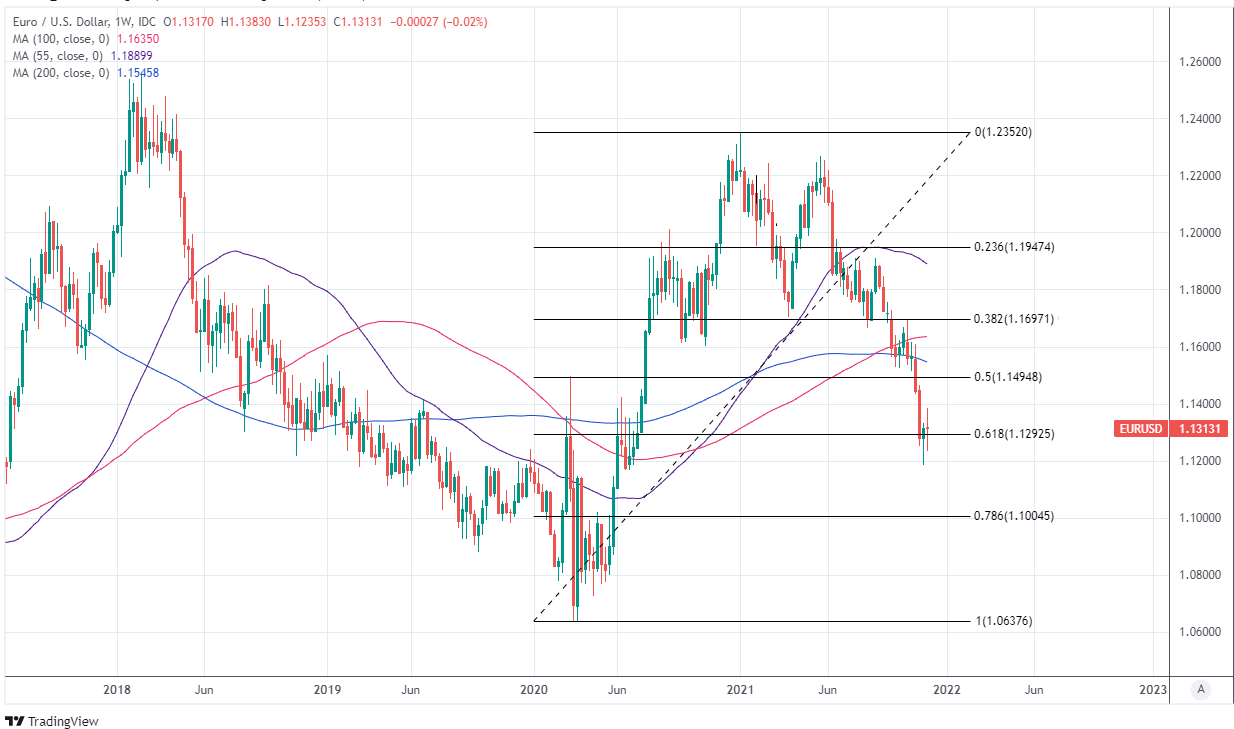 “With the Fed set to speed up tapering against a backdrop of Omicron uncertainties and emerging signs of easing commodity-related inflation risks, US real yields could move higher. The coming two weeks will see eight G10 central bank decisions and other G10 central banks may well take a more cautious approach to removing monetary stimulus,” says Derek Halpenny, head of research, global markets EMEA and international securities at MUFG.

“So we see the near-term outlook as still favourable for the US dollar. Long USD leveraged positioning has been reduced by around one-third in just two weeks which points to scope for a rebuilding of those positions providing scope for EUR/USD to test the 1.1000 level and DXY to breach the 97.000 level,” Halpenny and colleagues said in a note on Friday.

The ramping up of restrictions in Europe comes at an inopportune time for the Euro-Dollar rate as it throws a further curveball at the Eurozone economy just as the U.S. Dollar is benefitting from an apparent pivot at the Federal Reserve toward an accelerated pace of monetary policy normalisation.

Many see as likely a December 15 decision to speed up the pace at which its quantitative easing programme is wound down.

This would pave the way for U.S. interest rates to begin rising as soon as the second quarter of next year, which is a prospective reality that will loom larger and larger over the single currency during the weeks ahead and which could ultimately limit any recovery in the Euro-Dollar rate. 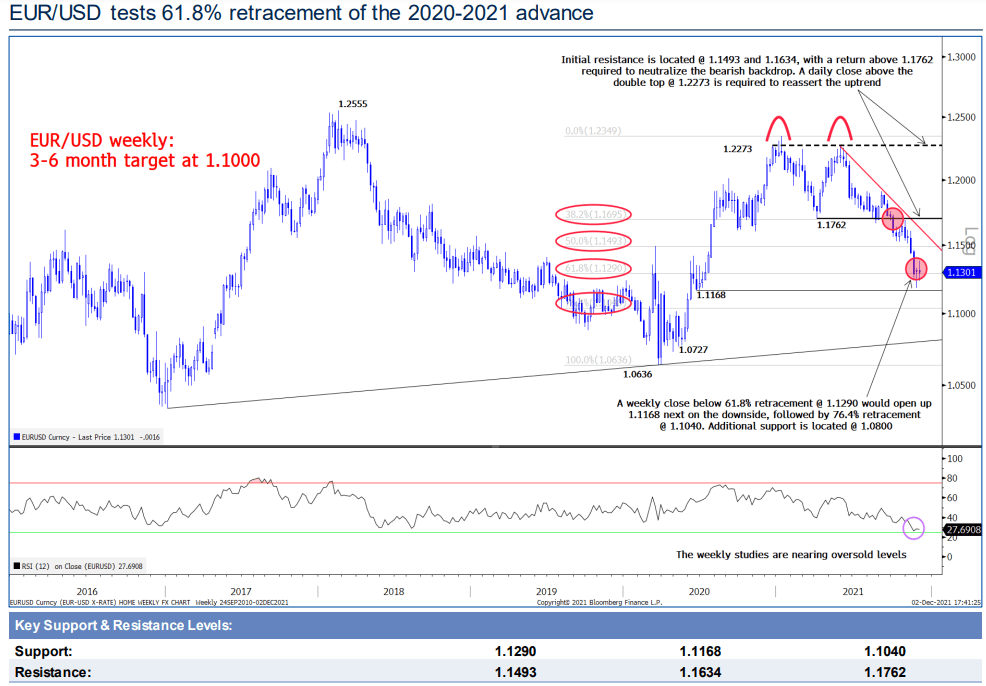