Foreign exchange markets are relatively subdued ahead of the week's main market event: the March interest rate decision of the U.S. Federal Reserve.

The Euro has swung from losses to gains against the Dollar, Pound and other major currencies, but foreign exchange strategists we follow say no major directional moves are likely until the Fed's call.

The Fed decision, due at 18:00 GMT, comes at an important moment for the Euro-to-Dollar exchange rate (EUR/USD), which is approaching a major technical level which could ultimately guide trade over coming weeks.

"Where the pair closes in relation to the 200-DMA is vital," says Jeremy Boulton, a Reuters market analyst.

The 200-day moving average is located at 1.1486 at the time of publication, and is designated by the blue line in the below: 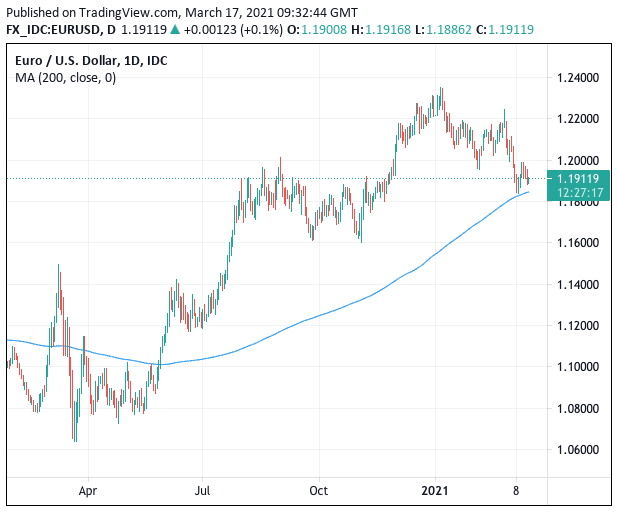 "The 200-DMA break in May 2020 sparked a huge rally," notes Boulton. "Should EUR/USD close below it the least traders should expect is a period of lower ranges within the 1.15-20 bounds traded August-December last year."

But, if the break above the 200-DMA is matched by a break down, the drop will run much deeper than most traders now expect warns the analyst.

He notes EUR/USD is yet to reach the minimum objective for a technical correction of its rise since March last year, which is 1.1695.

"The bull trend is strong and 1.1695 is the ideal spot from where the uptrend is resumed, a probability heightened if traders significantly reduce bullish bets," says Boulton.

All eyes will today be on the U.S. Federal Reserve and their response to rising bond yields, which numerous analysts we follow say are supportive of the Dollar.

Indeed, we report here that analysts are saying the Dollar can go higher should bond yields rise further in response to the Fed meeting.

But Boulton makes a point that while the rise in U.S. yields has gained much attention recently, "to trade EUR/USD in relation to yields is probably a mistake".

He explains EUR/USD dropped substantially between 2018 and 2020, because there was a big interest rate gap and shorting EUR/USD to bank that carry offered easy money.

"That gap was eliminated last year and EUR/USD rallied, but the rally was mainly inspired by the European Union's landmark agreement for a rescue fund. Yields were not even on FX traders' radar. That raises serious doubt whether yields can now drive a sell-off," says Boulton.

"Until January this year, EUR/USD rose regardless of the bond moves that pushed the UST/German 10-year yield spread wider. Movement this year for the yield spread is less than that which failed to halt EUR/USD's rising last year," he adds.

Fed Chairman Jerome Powell and his team will likely address the big question investors are grappling with at present: that of rising yields on government bonds.

"The FOMC is facing the first big test of its ultra-dovish policy stance," says Valentin Marinov, Head of G10 FX Strategy at Crédit Agricole. "Expectations of a vigorous U.S. economic recovery and even overheating have propelled UST yields to multi-month highs while US rates markets have started front-loading rate hikes.

Treasury bond yields (USTs) have risen sharply thanks to the passage of the $1.9TRN stimulus package, a reflection that investors believe the injection of cash will raise inflation rates over coming months and years. Bond investors demand greater compensation for holding Treasuries if they expect higher inflation in the future, which is in turn reflected in the higher yield the bond issuer pays out.

The side effects of rising bond yields is a generalised rising cost of finance which rips right through the financial sector, which in turn acts as a headwind to the economic recovery.

Another side effect of rising bond yields has been a firmer Dollar. Therefore, the Fed's ability to contain rising yields has implications for the Dollar and markets in general.

If the Fed signals it is comfortable that the rising yields represent improved confidence in the economic outlook, the Dollar could be the big winner in the wake of the Fed meeting.

The rise in yields and inflation exceptions corresponded with the market now pricing in an initial interest rate hike from the Fed within the next two years, with three hikes in total expected by the end of 2023.