- EUR/USD at highest since April 2018 as 'reflation' trade dominates.
- Vaccine approvals bolster outlook, aiding sentiment and risk assets.
- But resistance looms over EUR on charts ahead of key ECB update.

Europe's unified unit had risen for three-days on the bounce, taking its one-week gain to nearly two percent while making for a three percent increase in the month to December 03, with Thursday's increase coming even as stock markets pulled back from highs reached earlier this week.

Rising Euro exchange rates are a symptom of the 'reflation trade' that's seen investors move out of safe-havens and into cyclical assets which are better placed to benefit from a global recovery that grew more likely in November with the attainment of key milestones in the race for a coronavirus vaccine.

"'Reflation' is the dominant theme in global financial markets, and these are difficult forces for investors (or central banks) to lean against," says Stephen Gallo, European head of FX strategy at BMO Capital Markets. "We believe that the correct way to trade this dynamic through FX and other asset classes is to be a buyer of EURUSD as global financial market sentiment improves, while simultaneously hedging a portion of that risk using variables that will reflect an eventual re-emergence of deflationary risks."

BMO views buying or holding EUR/USD as one of the best ways to capitalise on an improving global economic outlook and has forecast the single currency to trade mostly between 1.20 and 1.22 over the next six months. 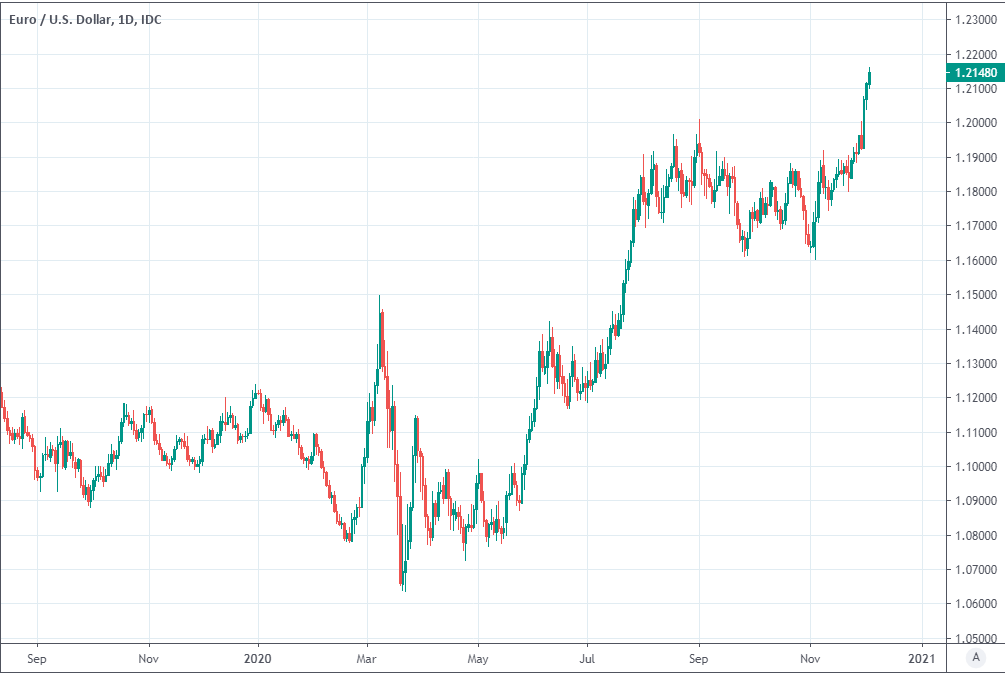 Upgrades to European PMI surveys and strong numbers from China demonstrated on Monday and Tuesday how the reflation of the global economy is already underway, although the outlook was bolstered Wednesday by Britain's approval of the vaccine made by Pfizer and BioNTech.

That puts light at the end of the tunnel for the UK economy and is an indication that others countries including those in Europe could soon follow suit, posing what some economists say are upside risks to 2021 growth forecasts.

This has helped lift the Euro further above the landmark 1.20 threshold but not everyone is enthusiastic about holding it at these levels, with conviction among some buyers having wained with the rally near to 2018 highs.

"It’s better to say that the US dollar weakened," says Jeroen Blokland, a multi-asset portfolio manager at Robecco, a fund manager with €171bn (£151bn) of assets in 2019. "Above 1.20, however, much of the risk premium on the EUR/USD exchange rate has vanished. The euro could rise a little further, but again this would be largely due to dollar weakness. We should also take into account that in the continuous search for yield, the US has become more attractive in recent months and bond yield differentials with the Eurozone have increased. Hence, I do not have that much conviction on a long EURUSD trade."

The Euro is also nearing a technical obstacle on the charts: The 78.6% Fibonacci retracement of the January 2018 downtrend, which is located around 1.2148. That could take days if-not weeks to overcome, more so if European Central Bank (ECB) policymakers are successful in talking the single currency down from current levels following next Thursday's monetary policy meeting. 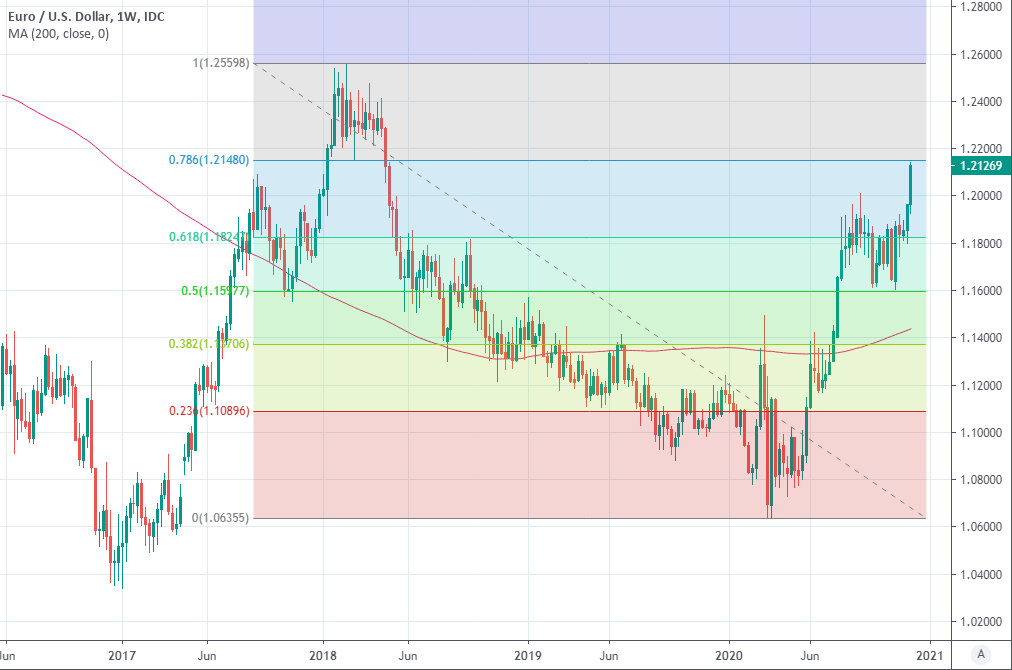 Above: Euro-to-Dollar rate shown at weekly intervals with Fibonacci retracements of downtrend that began in January 2018.

"EUR/USD has maintained upside pressure following the break above the 1.2014 August peak. It is poised to reach 1.2145, the 78.6% retracement and this is the break up point longer term to 1.2622, the 200 month moving average. We note the 13 count on the 240 minute chart and will attempt to buy the dips," says Karen Jones, head of technical analysis for currencies, commodities and bonds at Commerzbank. "Dips should find initial support at 1.1921."

The ECB fears the effect that a rising Euro will have on its ability to deliver a long-elusive inflation target of "close to but below 2%," given that rising exchange rates make imported goods cheaper to buy while also crimping export competitiveness. These fears appeared to be vindicated this week when Eurostat said that inflation remained at -0.3% in November, surprising on the downside of a market consensus that had looked for a tepid increase to -0.2%.

"The euro appreciation serves as an extra incentive for the ECB to increase QE. A recent ECB research note concludes that QE has a large and persistent effect on the EURUSD," says Kjersti Haugland, chief economist at DNB Markets. "We expect the pandemic emergency purchasing programme (PEPP) to be increased both in size and duration. Moreover, we expect new rounds of TLTROs (targeted long-term refinancing operations) for banks to be announced, with even easier access and terms."

The ECB is set to announce its latest policy decision at 12:45 London time on Thursday 10 December, although the market will also listen closely to ECB President Christine Lagarde when she leads a press conference at 13:30 in the hope of gleaning crucial context.

Lagarde said in October the bank would "recalibrate all instruments" in response to the latest continental coronavirus-containing shutdowns, which was took to mean that it will expand its quantitative easing programme and potentially further reduce its already-negative deposit rate from the current -0.5%.

"There probably isn't much the ECB would be willing to do in order to halt EUR appreciation altogether, though that doesn't change the fact that the EUR's tendency to appreciate is a slow-moving dilemma," writes BMO's Gallo, in a Monday briefing.