The Euro-to-Dollar rate could move lower this week as it completes a corrective retracement of its October rally, according to technical analysts, although any losses are tipped to be short-term in nature because the single currency has now reversed its long-term downtrend.

Falling U.S. bond yields weighed on the greenback and lifted the Euro-to-Dollar rate toward the end of last week, helping the single currency to more than reverse its earlier decline, although German GDP figures surprising on the upside also helped put a floor underneath the exchange rate. However, the Euro remains a way off from a key 'resistance' level that it must overcome on the charts in order to fully alleviate downside pressures.

"Short-term and as long as weekly trend line resistance (at 1.1229 this week) is not taken out, we see a temporary setback risk in form of an internal and minor 2nd wave setback, which could retrace 76.4 % of the October rally (currently at 1.0950). Only a break above 1.1229 would eliminate the looming setback risk in favor of a broader recovery to at least 1.1414/48/89," says Thomas Anthonj, a strategist at J.P. Morgan.

Anthonj says the Euro's strong finish to the October month was a "key-reversal" that provides "additional, strong evidence that the long-term downtrend has been reversed." However, the currency's failure to overcome resistance at 1.1180 has given way to a downward correction that is not yet complete. Anthonj says completing retracement lower could ultimately see the Euro slip back as far as 1.0950 against the Dollar in the days ahead. He's not only one who's mindful of the prospect of losses ahead either. 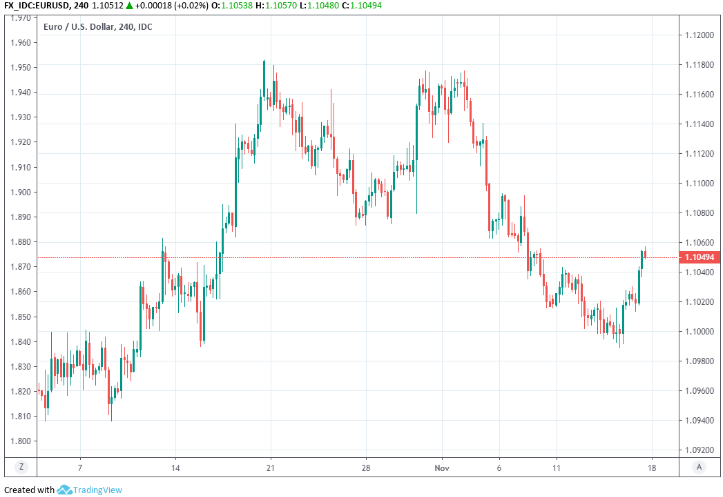 Karen Jones, head of technical analysis at Commerzbank, told clients Friday the Euro's inability to overcome the 1.1065 level on a closing basis leaves it vulnerable to a decline back to 1.0943, roughly the same area Anthonj is eyeing. However, and like Anthonj, Jones says the long-term Euro trend has turned for the better in recent weeks.

"EUR/USD remains on the defensive and has started to erode the 61.8% retracement at 1.0994. However yesterdays price action constituted a key day reversal and we would allow for a rebound into the 1.1065/1.1097 band very near term. This is the location of the 55 day ma and we will need to regain this for a viable retest of the 1.1180 recent high. While capped by the 55 day ma, the market is regarded as under pressure and capable of extending the decline to the next Fibonacci support at 1.0943," Jones writes, in a note to clients .

The market "has based", Jones says, but one final push lower toward the 1.0814 level is possible before the Euro sees a sustained reversal higher. 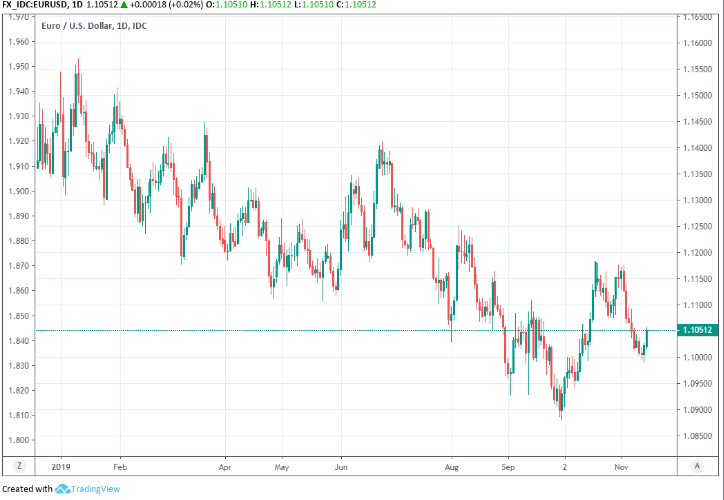 Currency traders will be looking toward the Federal Reserve (Fed) and European Central Bank (ECB) monetary policy meeting minutes for clues on the relative interest rate outlook this week, while November's manufacturing and services PMI surveys will provide an update on the growth outlook.

Minutes of the October ECB meeting will be released at 1230 Thursday although they're unlikely to have much market impact because they relate to former President Mario Draghi's last meeting and the bank is now the charge of Christine Lagarde. However, a Friday speech by Lagarde to the European Banking Conference, expected around 0800, is likely to garner more attention.

"Christine Lagarde’s ECB is not about to suddenly pivot away from the course set by Mario Draghi over the summer. In the absence of an external shock, the most likely scenario is that Lagarde sticks to the status quo at the December press conference and any serious discussion about how monetary policy evolves won’t be taking place until the press conference in March at the earliest," says Marchel Alexandrovich, an economist at Jefferies.

Arguably the most important release for the Euro in the week ahead will be the IHS Markit PMI surveys due out between 0815 and 1000 on Friday. Both the manufacturing and services barometers rose by a fraction last month and markets are looking for them to do so again in November. Continued gains in the PMIs might be taken by markets as further evidence that the downturn in the Eurozone industrial sector is coming to an end, which might help put a floor under the single currency.

"The German national accounts now paint a picture of a start-stop economy. Germany teetered on the brink of recession in H2 2018, and then rebounded strongly in the first quarter of 2019, but has since stalled," says Claus Vistesen, chief Eurozone economist at Pantheon Macroeconomics, "Italy and Germany are still the key laggards among the major economies, in contrast to still-decent growth in Spain and France."

Rising PMI numbers would be consistent with the message given off by Germany's ZEW survey for November, which showed financial market analysts becoming more optimistic about the outlook for growth.

That was attributed by respondents in the survey to the Brexit agreement struck by Prime Minister Boris Johnson in October and reports suggesting President Donald Trump is unlikely to impose tariffs on imports of cars from Europe, but it also followed other data that suggested the German and Eurozone economies didn't slow as much during the third quarter as was previously thought.

"We certainly believe the change in data flow, while not yet compelling and certainly from a low base will be enough to curtail euro selling. However, price action in recent weeks points to the euro as a funding currency and that of course will not change. So at this juncture we are more inclined to point toward EUR stability based on better incoming economic data rather than any notable turn higher," says Derek Halpenny, head of research, global markets EMEA & international securities at MUFG.

The Dollar softened in the latter half of last week as U.S. government bond yields continued to retreat from earlier highs in response to fresh doubts over whether the 'phase one deal' between the U.S. and China, as well as due to economic concerns, although some strategists say the downside will be limited in the days ahead.

Minutes of the October Federal Reserve interest rate meeting are the main event in the calendar for the Dollar although after a series of more up-to-date remarks from various Fed policymakers over the last week, few anticipate the minutes having much impact on the market. That could leave investors again looking to the White House and trade talks with China for cues on the Dollar, not least of all because the economic calendar is otherwise quiet.

"The dollar did lose some momentum after a two-week run, but is still lacking a tangible negative catalyst, so it may be able to retain most of its recent strength in the coming days," says Chris Turner, head of FX strategy at ING. "The contradicting news flow on trade negotiations continues to generate market noise but it can neither trigger a major correction in the supported risk environment nor fuel a decisive rally in pro-cyclical assets."

Turner says the Fed minutes should confirm that, after three rate cuts thus far in 2019, policymakers intend to sit back and observe the results of their work into year-end rather than taking any further actions. Fed Chairman Jerome Powell suggested said last week that inflation remains "muted", the growth outlook is favourable and that it would take a "material reassessment" of the outlook to get the bank cutting rates again any time soon.

"The USD’s recent rebound has lost some upward momentum over the past week after 10-year UST yields failed to break back above 2.00%. The pullback in US yields has encouraged low yielding currencies such as the JPY and CHF to strengthen. Market participants remain optimistic over a partial US-China trade deal but there have been only modest spill-overs into the FX market," says MUFG's Halpenny.

President Trump told The Economic Club of New York late Tuesday that "a significant phase one trade deal with China could happen" but then threatened that "If we don’t make a deal, we’re going to substantially raise those tariffs. They’re going to be raised very substantially." The remarks underlined a recent change in White House rhetoric around the agreement that was said to have been struck with China on October 11, which now seems less like the sure thing it was billed as just a few weeks ago.

Those remarks and their uncertain implications for the trade war and U.S. economy are what prompted the turn lower in government bond yields.