The Euro softened against all of its major rivals Wednesday as investors shunned the currency ahead of an eagerly-awaited interest rate policy decision from the European Central Bank (ECB), which is being billed as likely to set the direction for the single currency into year-end.

Thursday's 12:45 ECB policy decision could help lift the Euro into the weekend, according to strategists at ING, who say the central bank is apt to disappoint a market that's increasingly come to expect radical action this September after repeated escalations of the U.S.-China trade war snuffed out the "green shoots of recovery" seen springing from the ground in the Eurozone earlier in 2019. A press conference will be held at 13:30 to explain the decisions.

Consensus among economists favours a 10 basis point cut to the ECB deposit rate Thursday, taking it from an already-negative -0.4% to -0.5%, and for the bank to restart the quantitative easing program it only just wound up back in 2018 by declaring its intention to buy €30 bn per month in European government and corporate bonds. Some analysts see that new bond buying program rolling on for years while others are worrying it may not even materialise at all.

"Given the chance that the ECB fails to match market expectations for easing policy, the balance of risks favours higher EUR/USD and European FX outperformance on the day. But any spike in EUR/USD and EU FX should be temporary," says Petr Krpata at ING. "Unless the ECB goes big (EUR 40-60 billion per month) we expect either limited euro reaction or a spike in EUR/USD higher – the former being a response to the EUR 30bn QE size, the latter a responce to a delay of bond buying)."

Krpata says the Euro could rally as high as 1.1250 against the Dollar Thursday if the ECB does not announce a new bond buying program, which is a risk that some analysts fear given that some ECB members have always opposed the controversial initiative have spoken out against it again in recent weeks. It doesn't help those arguing in favour of fresh QE that Eurozone core inflation was only 0.2% higher in August than it was in January 2015 when the first program was announced.

"This is because a lack of stimulus will likely increase market concern about the eurozone's economic outlook and lead to a further deterioration in growth and inflation expectations. This could lead to an even bigger need for subsequent easing. Hence, a potential EUR/USD rebound this week should be seen as an attractive entry point for preparing for lower EUR/USD levels," Krpata says. "We revise our EUR/USD forecast lower and expect the cross to move into a 1.05-1.10 range for the rest of the year."

Changes in interest rates are normally only made in response to movements in inflation, which is sensitive to growth, but impact currencies because of the push and pull influence they have over capital flows. Falling rates tend to drive investment flows away from a currency and depress exchange rates.

The ECB has cut interest rates and bought large volumes of bonds for years in the hope of lifting inflation back to the target of "close to, but below 2%" by stimulating the economy with lower borrowing costs. However, and so far in the process, the bank has got little to show for its efforts. Headline inflation fell 10 basis points to 1% in August and core inflation, which is the preferred measure price pressures among central bankers, dropped from 1.1% to 0.9% and both were already far too low. 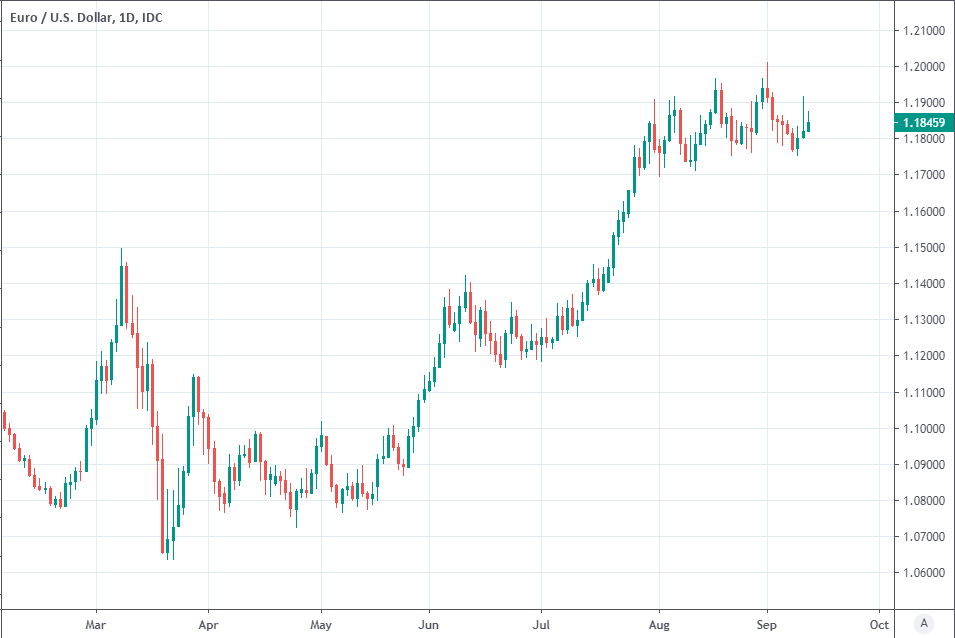 "EURUSD should drift lower to 1.09 in 3M and 1.08 in 6M, but our expectation for looser fiscal policy in Germany is a key reason why those numbers aren't lower," says Stephen Gallo, European head of FX strategy at BMO Capital Markets. "The suppression of EUR rates by the ECB and the pressure on the central bank to trigger faster nominal GDP growth will have to be reflected to some degree in a weaker EUR."

Expectations of ECB action have mounted this year as official data painted a picture of a deterioating growth outlook that's simply getting "worse and worse", in the words of outgoing ECB chief Mario Draghi, who's set to be replaced by former International Monetary Fund boss Christine Lagarde when his term ends next month. Growth has slowed notably in the Eurozone as it contends with a litany of headwinds that look set to go on buffeting it for a while yet.

Eurozone GDP growth is forecast by the European Commission to come in at just 1.2% for 2019. This is below what the ECB's calls 'potential growth' and estimates to be around 1.25%, which means the economy is not currently growing fast enough to generate any inflation pressures at all. This is why markets are calling ECB action as a matter of urgency on Thursday.

"Our base case sees a 20bps rate cut with tiering, €40bn/m of QE, and no rate hikes until at least mid-2021. We're more comfortable with the rates view than QE, as QE will likely be a contentious decision. Our dovish ECB call has us looking for downside risks to EURUSD. We think spot will be more sensitive to a large QE announcement than rate cuts as much of the expected Fed/ECB policy path differential already looks priced," says Jacqui Douglas, chief European macro strategist at TD Securities. 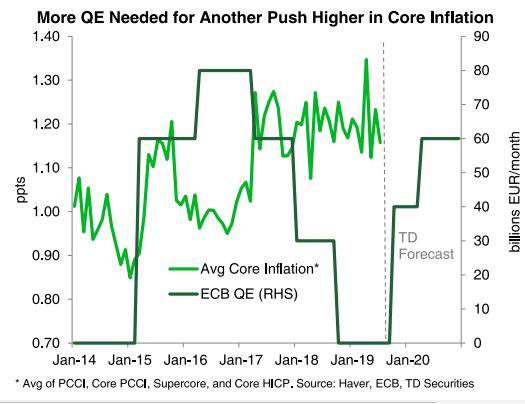 President Donald Trump's trade war with China, which escalated again in August and early September only for a round of October talks aimed at negotiating a de-escalation were hurriedly announced last week. U.S. tariffs, which now cover almost all of China's annual exports to America, have hurt the world's second largest economy and put a dent in Chinese demand for products made in German factories.

Trump imposed a 15% tariff on the remaining $300 bn of Chinese on September 01, with around half of those levies being implemented already and the the other half being deferred until December 15. He also lifted the tariff rate charged on another $250 bn of imports from China, from 25% to 30%, although that's not set to take effect until October 01. October talks announced last week could yet avert the December tariffs but they'll do little to prevent the other levies from further hurting an ailing Eurozone.

Chinese officials were said Wednesday to be propositioning the White House with an offer to buy agricultural goods ahead of talks aimed at de-escalating the trade war, which are set to take place next month. The report came as China unveiled a list of U.S. products it will exempt from its own levies announced earlier this year in retaliation against tariffs imposed by the U.S. due to alleged unfair trading practices and intellectual property theft.

"We all know which direction things are headed in as far as ECB policy is concerned; but it's the uncertainty about the timeline which keeps investors on their toes," says BMO's Gallo. "The economic fundamentals say one thing, but the politics of the Eurozone say something else. We still think the right trade in the bigger picture is to position for more EURUSD downside...FX investors should in our opinion look to fade the materialization of disappointment risk (EURUSD topside) if it emerges."