- And as growth, inflation and ECB outlook get "worse and worse".

- Fed not yet inclined to indulge market bets on further rate cuts.

The Euro fell to a fresh two-year low against the Dollar Thursday and is tipped to suffer further losses now the Federal Reserve (Fed) has breathed new life into the greenback by suggesting it might not cut U.S. interest rates this year as much as the markets were anticipating.

America's greenback hit a 2019 high Thursday, driving the Euro-Dollar rate to a fresh two-year low in the process, after the Fed told markets late Wednesday it will "monitor the implications of incoming information for the economic outlook" while contemplating the "future path" of U.S. interest rates.

The Fed did cut its interest rate for the first time since the aftermath of the financial crisis Wednesday, taking the Fed Funds rate range down 25 basis points to between 2% and 2.25%, but two of the 17 voters on the Federal Open Market Committee (FOMC) opposed the move and the bank was upbeat about the U.S. economic outlook.

It also announced an early end to the so-called quantitative tightening program that's seen it drain Dollars from the financial system as it stops reinvesting the proceeds of maturing bonds acquired during the quantitative easing years, which should have been a negative for the greenback.

....As usual, Powell let us down, but at least he is ending quantitative tightening, which shouldn’t have started in the first place - no inflation. We are winning anyway, but I am certainly not getting much help from the Federal Reserve! 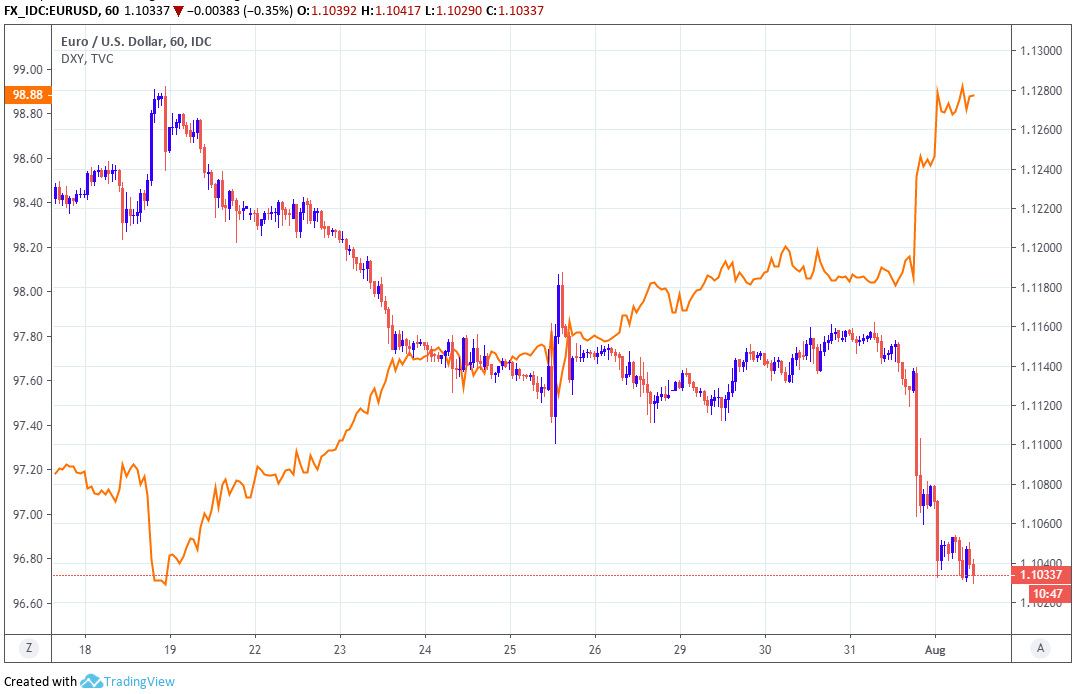 "We believe this is excessive, given the relative resilience of the US economy to-date and recent evidence that suggests inflation may be bottoming out. Barring a marked deterioration in the economic outlook, we expect the Fed to implement at most one more 25bps cut and then to remain on hold,” says Mark Haefele, chief investment officer at UBS Global Wealth Management.

Wednesday's comment about contemplating the future path of rates was seen by investors and analysts as a suggestion the Fed has not made up its mind on whether it will need to be cut further in the months ahead. In other words, the Fed might not cut U.S. interest rates again in 2019 if the data materialising between now and year-end shows the economy continuing to putter along at a robust enough pace.

This is in stark contrast to the outlook for the economy and interest rates in the Eurozone, where the European Central Bank (ECB) is widely expected to cut one of its own rates further below zero in September and restart the quantitative easing program that forced European bond yields to record lows and the Euro to its lowest since the turn of the millenium in recent years.

"Recent developments highlight a stark divide with the US. While the Fed’s baseline remains positive, ECB president Draghi last week said that the outlook is “getting worse and worse"," says Francis Cheung at Westpac. "EUR/USD is languishing at new lows. Further weakness and a breach of 1.10 are likely in coming sessions." 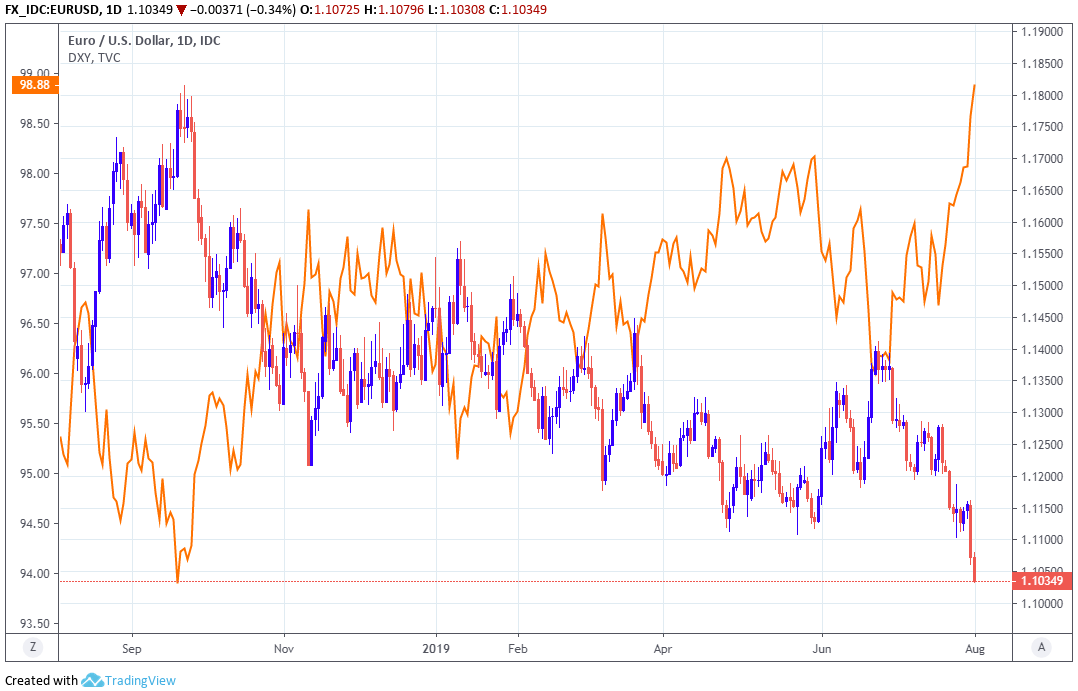 At the heart of the relative interest rate outlook are two economies where growth and inflation pulses are continuing to diverge. U.S. inflation sits a short distance below the Fed's 2% target and the economy is expanding at a decent enough pace to mean price pressures are likely to pick up further in the months ahead. But the core Eurozone inflation rate is close to a record low and so a long way below the ECB's target, while the economy is decelerating rapidly.

"The Fed delivered a cut, but the USD is on a firmer footing. We think this may have a bit further to run as a non-committal Powell helps to secure the USD's carry status, especially as relative balance sheet dynamics with the ECB remain EUR negative," says Mazen Issa, a strategist at TD Securities. 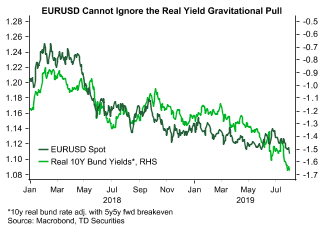 Eurozone GDP growth was just 0.2% in the second quarter, according to figures released Wednesday, which would see the economy expand by less than one percent if maintained over the course of a calendar year. European Commission officials forecast 2019 GDP growth of 1.3%, while the ECB is looking for just 1.2%. Both numbers are a long way below the 1.8% seen in 2018 and are lightyears off the 2.3% expansion clocked up back in 2017.

Meanwhile, the main inflation rate fell to 1.1% in July and the core inflation rate, which is seen as a truer reflection of domestic inflation pressures, fell to just 0.9% when the ECB needs Eurozone consumer price pressures to be "close to, but below 2%". Core inflation is only 0.3% higher than it was in January 2015 and although the headline rate is up from -0.6%, that latter change had more to do with movements in international oil prices than it did ECB interest rate policy.

"With growth slowing below potential and inflation already well below target, there is a strong case for the ECB to act as soon as possible," says Lee Hardman, a currency analyst at MUFG. "The increasing likelihood of a “No Deal” Brexit and lack of progress in recent US-China trade talks highlights that the outlook for the euro-zone economy could yet be hit by more negative shocks heading into year end...the euro remains vulnerable to further weakness." 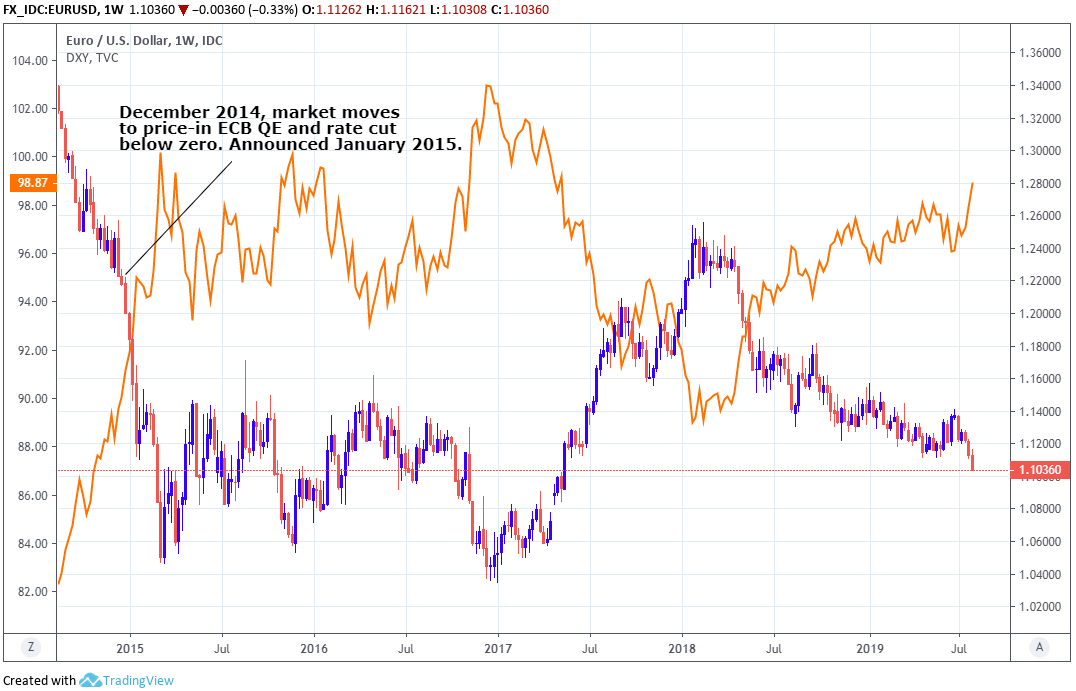 ECB President Mario Draghi said last week the Eurozone growth outlook is getting "worse and worse", before singling out manufacturing and those countries where manufacturing is important for growth as suffering the greatest. Surveys indicated Thursday that the German and Eurozone manufacturing sectors continued to wallow in recession at the beginning of the third quarter.

Draghi also said the ECB has tasked staff with devising a "tiered system for reserve remuneration" and considering "options for the size and composition" of a new quantitative easing program. References to a "tiered" system suggest the ECB is on the verge of cutting its deposit rate further below zero because policymakers have previously floated the idea as a means of protecting already-weak profitability at commercial banks from negative rate charges on reserves.

"Softer activity data, lower inflation and stronger central bank rhetoric in the Eurozone will see investors bracing for more ECB easing in September. Knowing now that the Fed will not be easing aggressively has allowed EUR/USD to fall through 1.1100 and the downside certainly looks very vulnerable through August. A break under 1.10 could see the White House more formally threaten unconventional FX intervention – but the EUR/USD trend looks lower now," warns Chris Turner, head of FX strategy at ING.