- EUR bottom not yet in, Rabobank eyes one last leg down.

- Recovery to be a slow burn, Rabobank and ING suggest.

- As ECB offsets Fed rate cuts with fresh stimulus of its own.

The Euro was treading water early in the new week as a resilient Dollar guards the path ahead of the single currency, which is likely to remain the case in the months ahead according to analysts at Rabobank and ING Group, who say any recovery is likely to be a very slow burn for Europe's unified unit.

Europe's single currency faces a tug-of-war with the Dollar later this summer as central banks on both sides of the Atlantic look to support their economies with interest rate cuts in the hope of someday meeting inflation targets, which have slipped further from view of late amid a broad global growth slowdown.

After its longest expansion in history the U.S. economy is widely believed to be headed for the rocks. Growth was always likely to slow in 2019 after the economy was pumped up last year by White House tax cuts but the U.S. trade war with China is now threatening to see this slowdown become more malign.

The Federal Reserve is now expected to cut its interest rate to 2.25% on Wednesday, July 31, and to follow up with another rate cut in September after Chairman Jerome Powell neglected to discourage markets from this view in his biannual update to Congress on U.S. interest rate policy last week.

"The market has long since moved on from speculating about whether the Federal Reserve will cut rates to the questions ‘when?’ and ‘how much?’ Despite the market’s preoccupation with US monetary policy, the DXY dollar index has struggled to break free of levels traded at the end of 2018. The simple explanation for this is that other major central banks have also turned dovish," says Jane Foley, head of FX strategy at Rabobank. 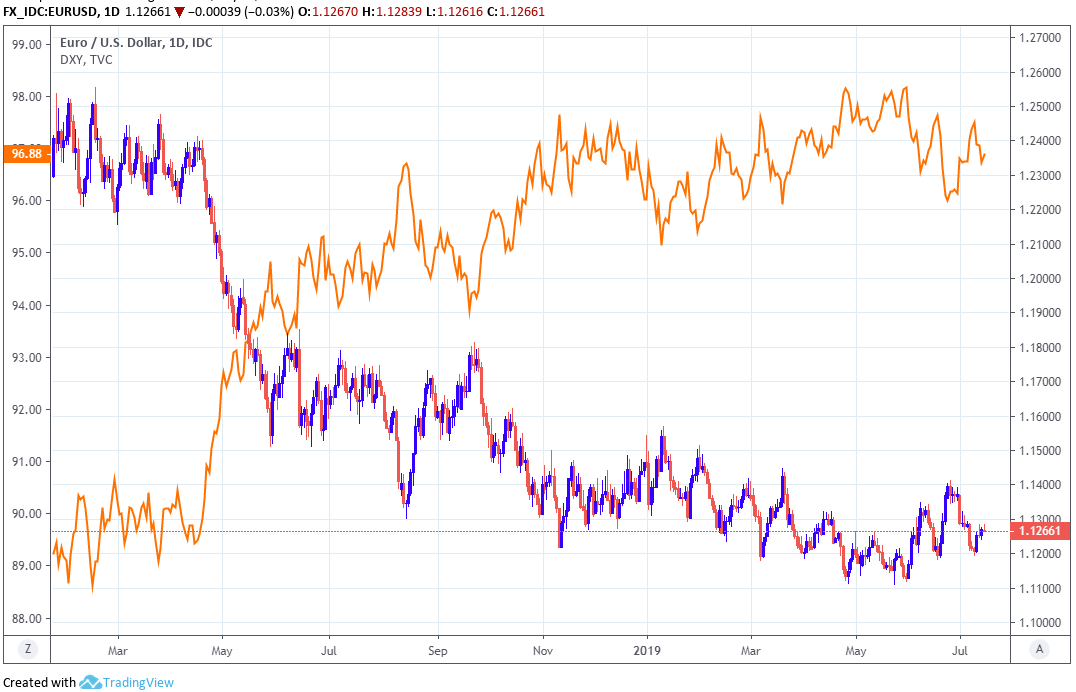 Analysts have long suggested the Fed would soon bring its four-year-long rate hiking cycle to an end this year or next and, originally, that move was supposed to be a harbinger of decline for a Dollar that dominated currency markets last year thanks to multiple Fed rate hikes that came as other central banks sat on their hands.

However, now that moment of reckoning is just around the corner for the greenback many analysts are becoming more conservative in their forecasts for Dollar weakness and by implication, less bullish in their outlooks for the Euro.

This is because with Euro-Dollar trade accounting for so much of turnover in the currency market, one can only fall if the other is able to rise. And the Dollar's dance partner, the Euro, is in no condition to embark upon a climb to the kinds of lofty levels that some analysts had previously envisaged.

"The Fed has decisively shifted to an easing bias and should cut rates 25bp on 31 July and follow up with another 25bp in September," says Chris Turner, head of FX strategy at ING. "The ECB could cut the deposit rate 10bp on 25 July and lay the groundwork for fresh QE (targeting corporate debt) in September."

The European Central Bank (ECB) is a long way off from meeting its inflation target of "close to but below 2%" and with the global as well as Eurozone economies slowing steadily since the middle of 2018, the prospect of inflation pressures picking up enough to satisfy the ECB is growing ever more distant.

Mario Draghi, President of the ECB, warned in June that the bank could cut its interest rate and potentially restart its quantitative easing program in the months ahead if the outlook doesn't improve, which would normally be bad for the single currency although the Euro has actually risen 0.48% in the last month. 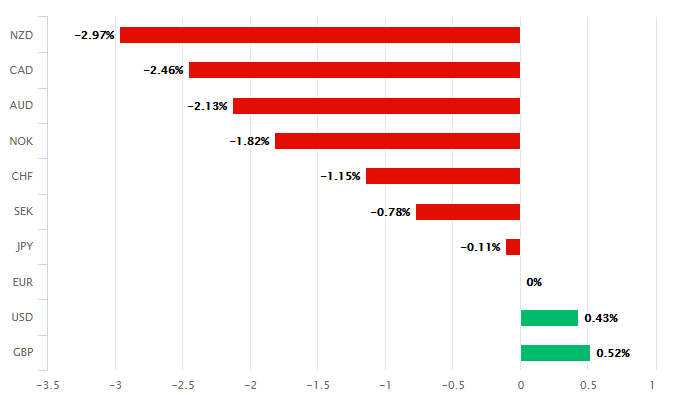 Euro resilience in 2019 reflects the fact that the ECB long ago fired the majority of its policymaking bullets, as well as the current reality across the Atlantic. After almost four years of raising rates weaning the market off policy support, the Federal Reserve now has a large armoury it can use to stimulate the U.S. economy and lift inflation.

"The need for a weaker dollar to play its role in the US reflation story is giving investors’ confidence that the eight-year dollar bull-run may be over. At the least, dollar upside looks limited and we continue to believe USD/JPY will lead any dollar decline," says ING's Turner.

Changes in rates are normally made in relation to the outlook for inflation, which is sensitive to economic growth, but impact currencies because of the influence they have over capital flows and the decisions of short-term speculators. Capital flows tend to move in the direction of the most advantageous or improving returns, with a threat of lower rates normally seeing investors driven out of and deterred away from a currency. Rising rates have the opposite effect.

The Euro fell from above 1.35 in August 2014 to around 1.12 by the end of January 2015 as financial markets anticipated and moved ahead of the ECB's original decision to cut its interest rate below zero and begin forcing down bond yields by buying large amounts of European bonds. However, that's forced yields on some 'safe' assets like German bonds below zero and others still at record lows, leading many to question whether lower ECB interest rates could even do much for the economy. 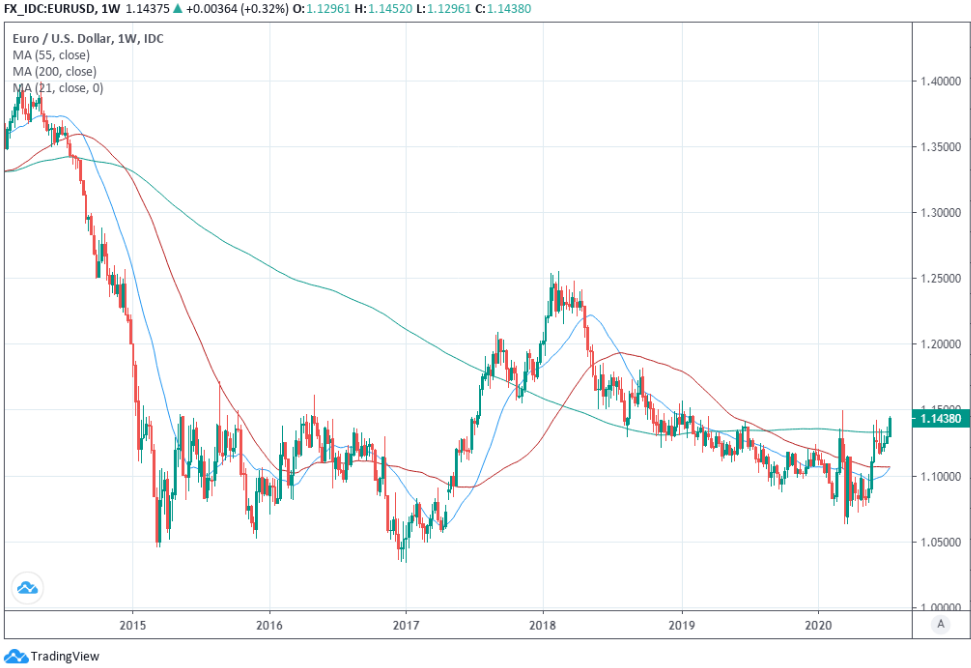 Above: Euro-to-Dollar rate at weekly intervals. Captures pre and post-ECB price action in 2014-2015.

Analysts at HSBC and UBS said in June that European Central Bank intervention has achieved as much as it is likely to and that in the absence of notable increases in government spending over the coming quarters, the only way to further stimulate the Eurozone economy and lift continental inflation would be to have the currency do the heavy lifting. But that particular road now looks to be being blocked by the Federal Reserve.

"Against the backdrop of slowing world growth the market is poised for what could be the start of an easing cycle by the Fed. That said, the dovish stances of most other G10 central banks is offsetting the impact of potential Fed action on the USD crosses. We expect the ECB to cut its discount rate further into negative territory at its Sep meeting," says Rabobank's Foley. "The dovish tone of other central banks will remain a constraint on USD downside."

Rabobank forecasts the Euro will fall to 1.10 before the end of September but that it should begin to climb slowly thereafter, regardless of anything the ECB does, given the Federal Reserve will also cutting its interest rate steeply. However, with the ECB seen keeping European bond yields pinned to the floor, the upward climb in the Euro-to-Dollar rate is likely to be slow burn. Rabobank's forecast for the exchange rate at the end of June 2020 is just 1.15.

ING has shares a similar view of the Euro's prospects although the bank's forecasts suggest the bottom for the Euro is already in. Turner projects the Euro-to-Dollar rate will remain around 1.12 until well into the final quarter before rising to 1.15 in time for year-end. His forecast for the end of June 2020 is 1.17.

Both sets of forecasts paint a very different picture to the Euro-Dollar price action seen in 2014 and 2015, before and after the ECB last cut its interest rate.