- Euro to be driven by Draghi commentary; Dollar by CPI

The Euro has been strong against the Dollar of late, but there is a chance the short-term rally could struggle to make further progress in the coming week

The Euro-to-Dollar rate is trading around 1.1330 at the start of the new trading week, after a surge of almost one and a half percent in the previous week. Studies of the charts however suggest the exchange rate is set to go sideways with a marginally bullish bias in the days ahead.

The 4-hour chart shows the pair in a steep uptrend which, although it would usually be expected to extend, has now encountered a tough band of resistance between 1.1330-1.1400 made up of several major moving averages (MA) which are likely to impede progress higher, at least in the short-term.

We use the 4-hour chart for the short-term outlook which includes the coming week. 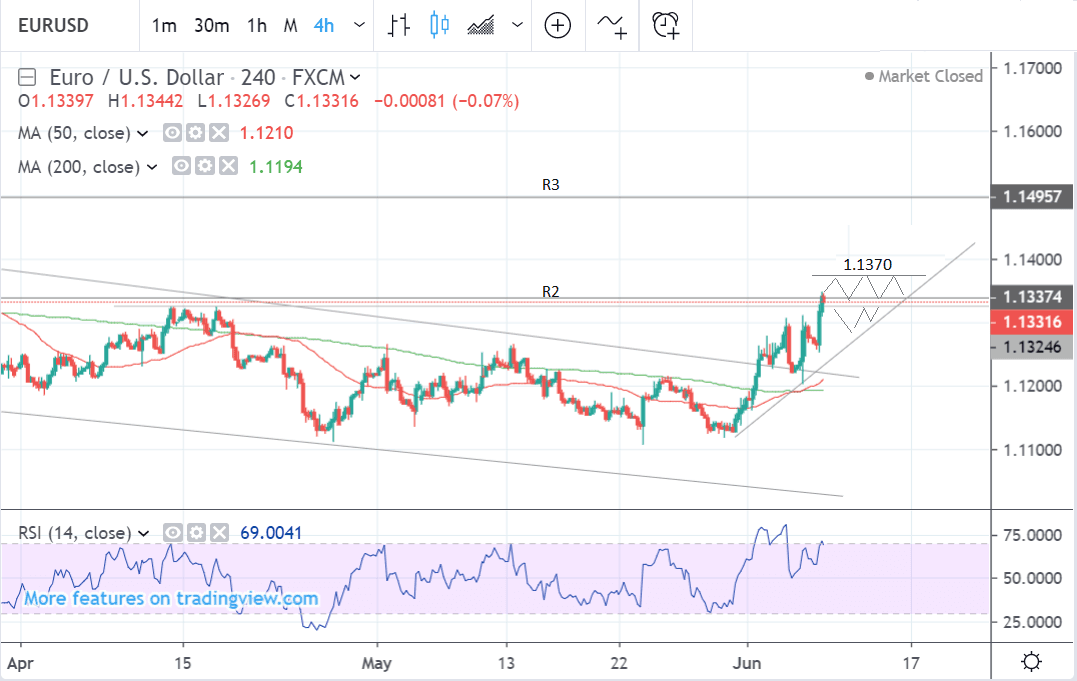 We think it is likely the pair will struggle to extend the uptrend and so instead will go sideways. It will probably be capped at 1.1370 and find a floor in the 1.1250s. It is likely to remain trapped between these levels, range bound, for at least the next 5 days.

The daily chart looks more bullish and shows the recent game-changing breakout from the falling channel more clearly. It suggests that over the medium-term the pair is likely to rise to a target at 1.1400. 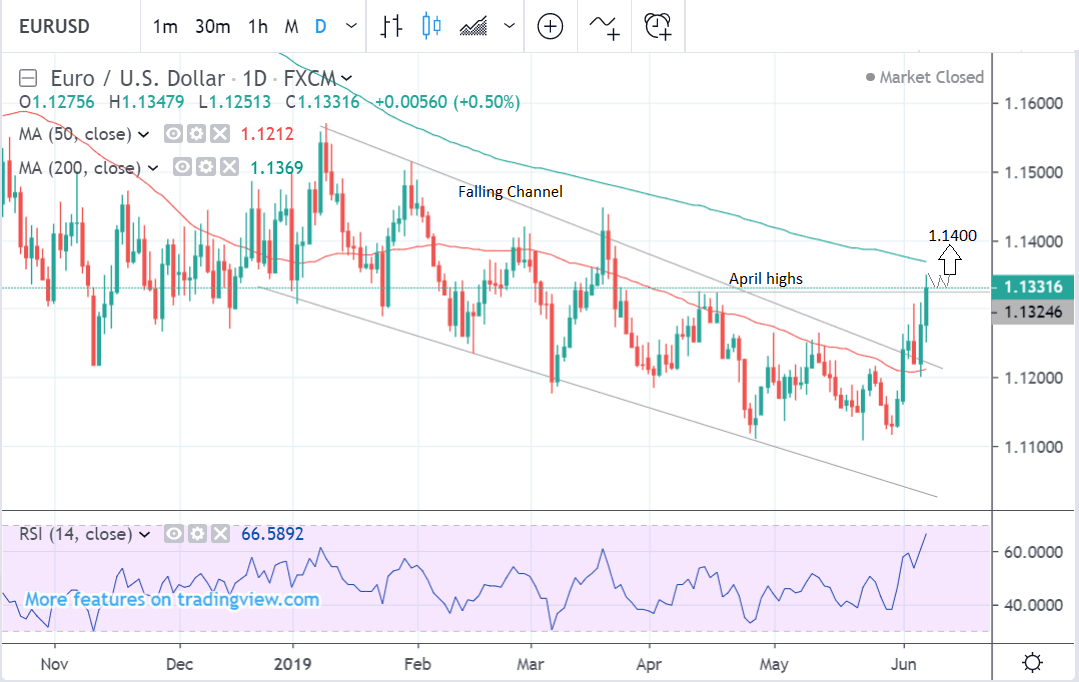 The chart also shows the 200-day MA at 1.1369 which is likely to cap gains in the short-term but which is eventually likely to be broken.

The RSI momentum indicator is rising strongly and steeply which is a further bullish sign.

The weekly chart is also quite bullish as it shows how the pair has just broken above a major trendline on a closing basis, suggesting the long-term downtrend may be reversing, and the pair will rise in the long-term. 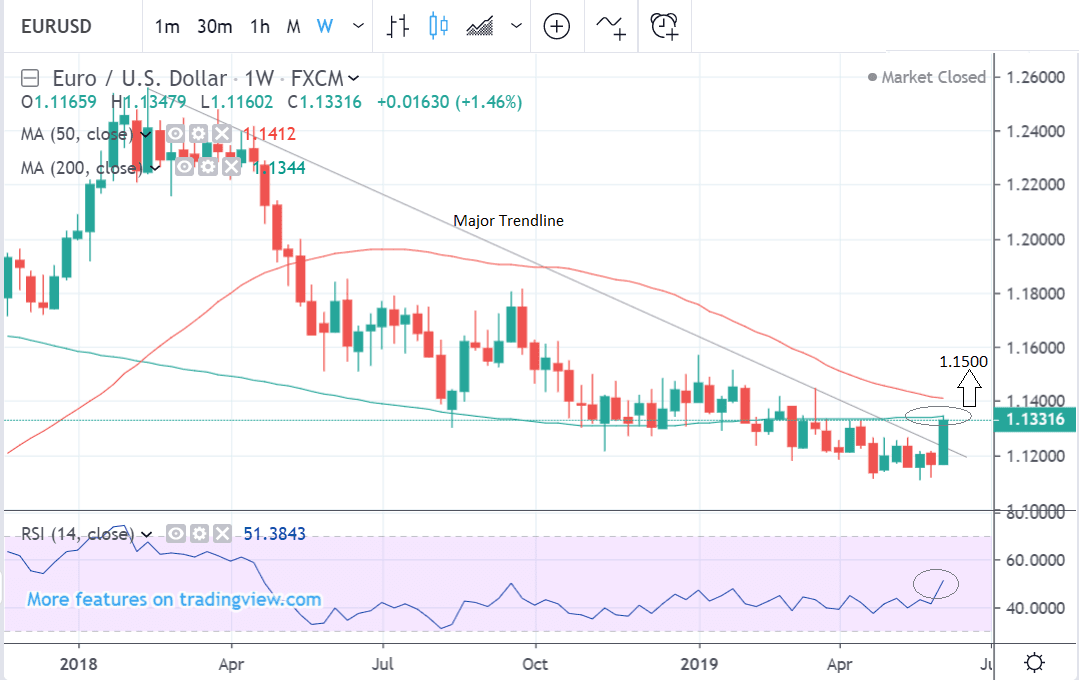 The strong bullish candle made by last week’s gains is a game-changer for the chart and suggests more upside is likely leading the pair to rise to 1.1500.

The Euro: Brussels Politics in Focus

The Euro has been strengthening of late with gains against the U.S. Dollar suggesting the single-currency is entering a broader uptrend.

The dynamics of the EUR/USD will be important for other EUR pairs, so we will keep an eye on this headline exchange rate.

Potentially important are speeches from ECB president Mario Draghi and De Guindos, although given the proximity to last week's ECB meeting, neither are likely to err much from the official stance, so their comments will probably not impact on the currency.

It could be that Draghi expands on the stance communicated last week.

We will also be keeping an eye on the meeting of Eurogroup finance ministers in Brussels on Thursday, June 13.

The meeting of the Eurogroup of the EU’s finance ministers could result in comments pertaining to monetary policy, the outlook for the economy or deeper economic integration - current hot topics to which the currency is sensitive - which could all impact the currency.

Also of importance will be any discussion over Italy's desire to bust Eurozone rules on taxing and spending.

The current Italian government wants to breach budget deficit rules to boost their economy, a move that will invite sanctions.

The showdown between Italy and the EU is a widely seen as a concern for the future functionining of the common currency area. For now the issue appears to be in hand, but should the situation lead to a 'crisis' we could well expect the Euro to come under pressure.

This is an issue to keep an eye on over coming weeks and months.

According to the meeting's official agenda, the key subjects under discussion will include the following:

The most important data releases for the U.S. Dollar in the coming week are Inflation (CPI) and retail sales.

Core CPI is seen as a more accurate gauge of inflation in the domestic economy than broad CPI, since it cuts out the more volatile oil and food components which can be attributed to seasonal and global factors.

A higher-than-expected result could push the Dollar higher since it could be evidencing growth - and vice versa for a lower result.

The greater risk is that lower-than-expected inflation increases pressure on the Federal Reserve (Fed) to cut interest rates.

This would be detrimental to the Dollar since lower interest rates tend to weaken currencies because they make the country less attractive as a destination for foreign investors to park their capital.

The Fed chairman recently hinted he might be more willing to consider a rate cut to support growth due to the dampening influence of slowing global growth. A lower inflation print would be seen as pushing him even more in the direction of a cut.

Retail sales is expected to show a 0.6% rise in May compared to the month before when it is released at 13.30 on Friday, June 14. Core retail sales, meanwhile, is forecast to rise by 0.4%.

Retail sales is an important indicator of consumer demand and since consumers are the biggest contributors to the U.S. economy, it's a key gauge of economic health and growth. If it rises higher-than-expected it will probably support the Dollar, and vice versa if it declines.

Industrial production is expected to show a 0.2% rise in May when it is released at the same time - it too is an important gauge of growth.