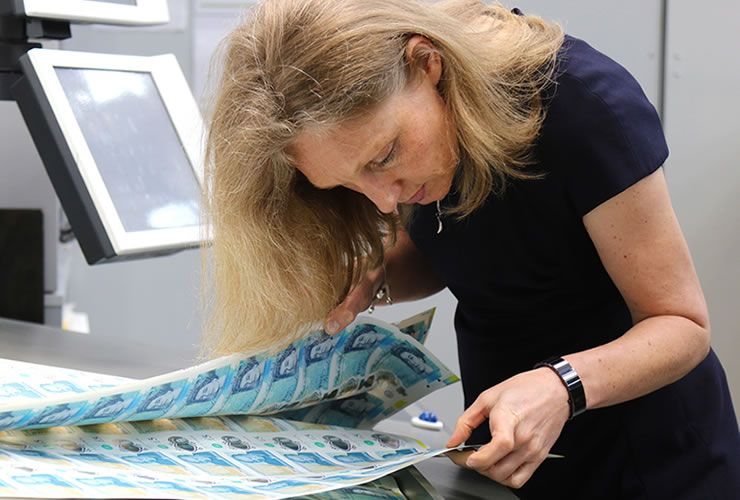 Above: Despite recent consolidation, Sterling is tipped to head higher over coming weeks. Image (C) Bank of England

The Pound's run higher against the Euro over the course of January has come to a halt with the GBP/EUR exchange rate achieving a best of 1.1510, before capitulating and consolidating.

At the time of writing we can quote the pair at 1.1425 and note the pullback from the high has been shallow.

Consolidation appears to be the name of the game for now and the technical analysis team at Natixis suggest the Euro could be in favour over coming days but ultimately the trend favours the Pound.

“Since the daily stochastic has picked up, we don’t rule out another test of the resistance at 0.8830. Note that a break of this barrier would affect the short term bearish bias, paving the way to 0.8862 and to 0.8905-0.8913,” warns Micaella Feldstein, a technical analyst at Natixis of the EUR/GBP exchange rate.

For those looking at this exchange rate from the Pound-to-Euro exchange rate angle, Feldstein therefore argues that break below 1.1325 in the GBP/EUR would pave the way for a further fall in the exchange rate, potentially as low as 1.1229.

However, Feldstein says this is the least likely outcome.

“We don’t favour such a view as the weekly indicators still send sell signals and as the daily MACD (trend indicator) remains bearish,” Feldstein writes of the EUR/GBP, in a note released at the turn of the month.

This means the Pound-to-Euro exchange rate is ultimately favoured to maintain its move higher.

In GBP/EUR terms, this means the Pound-to-Euro rate could move as high as 1.1475 in the short term before going on to assail the 1.1534 level over the medium term. 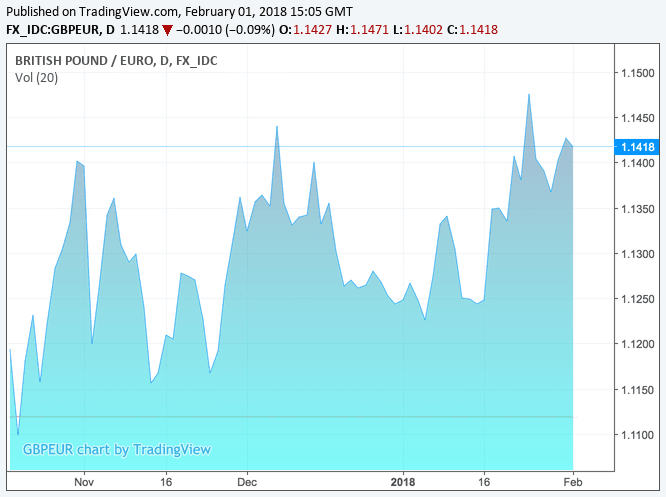 Above: This daily chart confirms the gentle trend higher in GBP/EUR

Technical analysts study the structure of the market and are able to identify where momentum, selling and buying interest lies, and is likely to lie in the future. This differs from fundamental analysis which looks at economics, politics, etc. Hence, it is possible for one institution to have two different calls on one exchange rate.

The technical call on Sterling made by Natixis comes days after a similar mention on the matter by Bank of America Merrill Lynch Global Research who argue the Pound remains in a strong position against the Euro and could ultimately make an attempt on the highs achieved back in mid-2017.

Paul Ciana, a technical analyst with BofAML - the global investment banking giant - believes a recent breakthrough in the Pound-to-Euro exchange rate could ultimately match that of the September 2017 advance in scope, hence why he sees a potential target in the early 1.20s.

The Pound Sterling uptrend "is starting to gain steam," says Ciana in a recent strategy briefing to clients.

The call comes as Sterling hovers towards the top end of its recent range held against the Euro that loosely falls between €1.11 at the bottom and €1.15 at the top. What those watching this market are ultimately looking for is a break out of this range and into an upward-sloping trend.

Our own studies note that the breakout has not yet materialised, and we look for a break above 1.1510 for confirmation that the exchange rate is about to make a decent run higher.

Nevertheless, Ciana has a different set of criteria to consider when approaching GBP/EUR and is confident Sterling is gearing up for further advances, and believes the gains could resemble those made in the rally of September 2017 when the Pound-to-Euro exchange rate went from an opening level of 1.0838 to record a high of 1.1431, before closing the month at 1.1334.

Ciana's view rests largely with the observation that the advance in GBP/EUR over the past two weeks has led to a "decisive" bullish break above the 50wk SMA.

The 50wk SMA - the 50 week Simple Moving Average - is the average level of the GBP/EUR exchange rate over the last 50 weeks. When the exchange rate moves from below to above the moving average; i.e. it is higher than the average price of the past 50 weeks, it is taken by technical analysts to be a very bullish signal indeed. 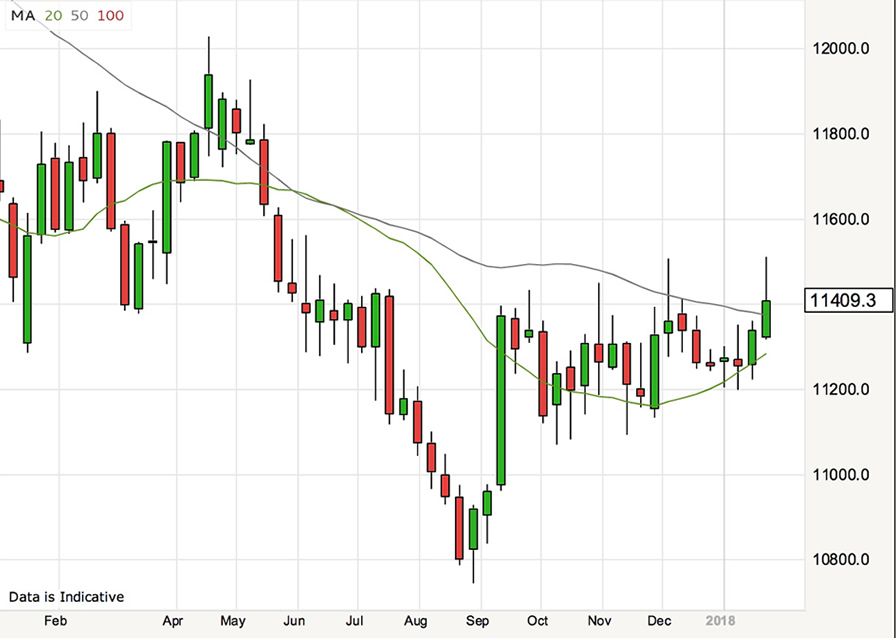 Above: The weekly chart for the GBP/EUR shows a breach of the 50 week moving average - denoted by the grey line.

Ciana thinks the decline in the Euro over the last two weeks "is the end of the 2H17 consolidation and thus the beginning of a new downtrend."

If the ensuing rise in the GBP/EUR is about equal to the rise seen in the beginning of September 2017 then Bank of America Merrill Lynch think the exchange rate can trend up to the 1.20s.

Sterling put in a resilient performance heading into the new month, setting aside a disappointing miss on the first major data release of the year - the IHS Markit Manufacturing PMI.

However, we noted in our coverage earlier that currency markets have nothing to fear from the data as the series confirms manufacturing is running well above its long-term run rate and the exports component of the release confirms a solid bounce in export orders.

Elsewhere, we report that Kamal Sharma of Bank of America is forecasting the Pound-to-Euro exchange rate to breach 1.17 in the year ahead, provided Brexit negotiations progress in a smooth manner.

This morning, we release a report that shows a number of major institutional investors are upgrading their forecasts for the Pound in the wake fo the strong start to January.

The data calendar features the release of UK construction PMI numbers, markets are looking for a reading of 52.0, however we expect little impact to Sterling from the release owing to the sector's relatively small size in the UK economy.