How and why the Bank of England will most likely seek to defend the value of Pound Sterling at their key August meeting. 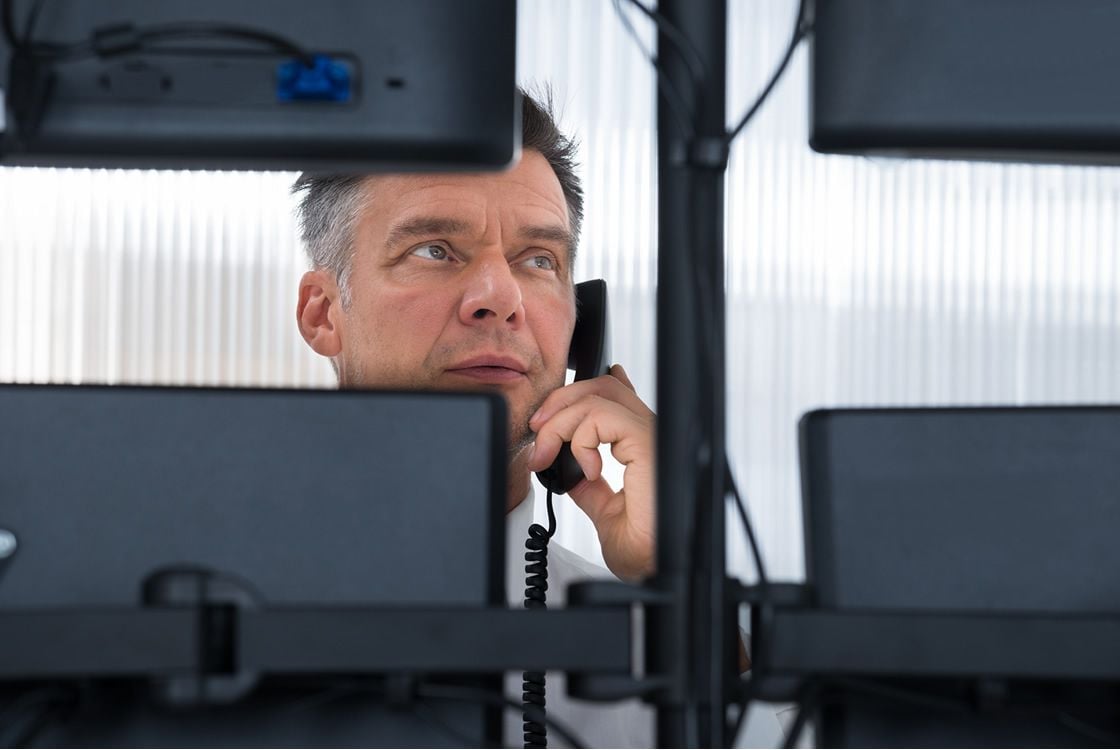 The Bank of England’s interest rate decision and Quarterly Inflation Report on Thursday, August 3 are the highlights of the UK event calendar and could provide volatility for the British Pound as traders adjust their expectations for future moves in UK interest rates.

Markets are of the view that an interest rate hike this week as a very low probability outcome following the tepid June retail sales report and the June deceleration in core inflation.

“However, we expect elements of the rate decision and Inflation Report to contain hawkish tilts, thereby providing some support to the GBP. The GBP will be an important element of the discussions within the MPC because fluctuations in the value of the currency have an impact on real income growth,” says Gregory Anderson at BMO Capital Markets.

With other major central banks normalising their own policy stances, BMO Capital suggest the Bank of England would want to avoid sending an overtly dovish signal this week in order to avoid extended GBP weakness.

The currency's ongoing recovery against the US Dollar, and attempts to form a base against the Euro, will have helped quell inflationary pressures in the economy as the cost of importing goods stabilises.

As a result, BMO Capital expect a repeat of the 5-3 vote from the June rate decision, with 3 MPC officials voting in favour of a rate hike and former MPC member Forbes’ rate hike vote replaced with Andy Haldane’s (the fact that the MPC has one remaining vacancy until early-September precludes a 6-3 vote).

Haldane - the Bank's chief economist - has surprised many with recent remarks that a 0.25% interest rate rise in the near-future could be a prudent move undertaken by the Bank.

“EURGBP will be watched closely due to its close proximity with the 0.9000 mark. We think leveraged money investors are moderately net-long of EURGBP, so if the MPC goes as we expect, the pair could fade below 0.8900 to 0.8850,” says Anderson.

“We also note that the EURUSD rally seems to have triggered recent EURGBP gains rather than UK economic fundamentals as reflected by short-term swap rate differentials,” says Anderson. 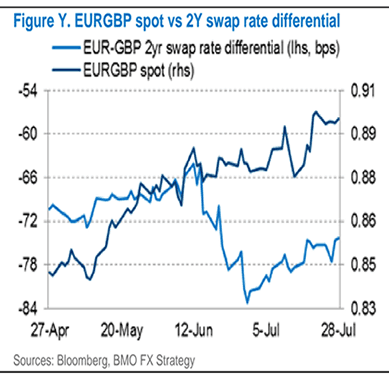 It actually appears that the headline EUR/USD continues to exert a strong pull on EUR/GBP, as a result we will be watching moves in EUR/USD closely for further hints if direction in EUR/GBP. 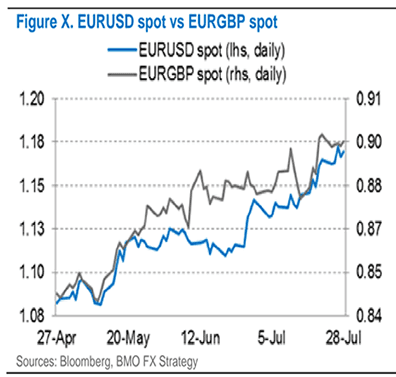 However, BMO Capital's expectations for the vote composition are not shared by the majority of the market with most seeing a 6-2 vote being likely.

“There has been a lot of speculation that the BoE is about to change tack. But, for now, policy still seems set to remain on hold,” says Lloyds Bank Commercial Banking’s chief economist Rhys Herbert, who forecasts a 6-2 split in favour of keeping interest rates unchanged.

“While the BoE took a more hawkish stance in June with a 3 MPC members voting for a hike, we look for a 6-2 vote this time as the uber-hawk Forbes departs and most top-tier data has surprised to the downside since Haldane’s hawkish speech in June.”

"It could well be a case where the diverse policy views of individual MPC members and greater BoE transparency combine to offer little consensus on the overall policy thinking, with plenty of supporting evidence for both the market doves and hawks to stick to their a priori views,” says Viraj Patel at ING Bank N.V.

ING’s base-case is for a 6-2 MPC vote split to keep rates on hold, which in theory should be perceived as dovish given that the lack of active dissenters reduces the likelihood of a November hike.

This would likely result in Pound Sterling weakening.

“But this might not be enough to drive GBP materially lower – especially as BoE watchers have been accustomed to more twist and turns in recent months than a Game of Thrones season,” says Patel.

The British Pound has caught a bid against the Euro and US Dollar on the back of a fresh set of UK economic data which confirms UK economic activity continues to accelerate from its soft start to the year.

The UK’s manufacturing sector continues along a path of growth according to fresh data amidst a welcome and perhaps long-overdue uptick in export activity.

IHS Markit and the CIPS report that their Manufacturing PMI survey reveals an acceleration in activity in the sector with a reading of 55.1 being reported for July, up on the previous month’s 54.2 and ahead of economist forecasts for 54.4. 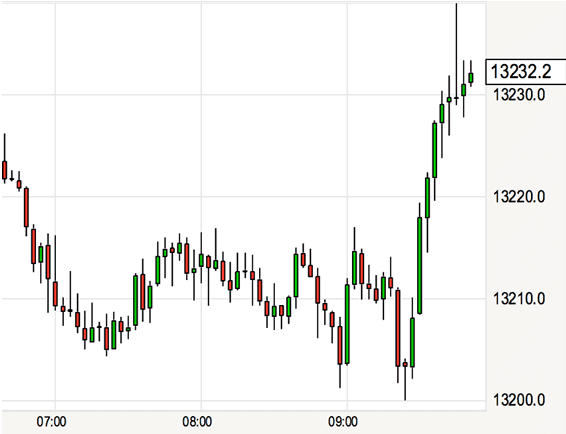 Above: Sterling rallies against the US Dollar at 09:30 when UK Manufacturing data is released.

"This morning’s UK manufacturing PMI survey gave the Pound another boost, following a sharp rise into a 10-month high against the Dollar yesterday. Particular encouragement will be drawn from the strong export performance, with the continued decline in the value of the pound, relative to the euro, making UK producers increasingly competitive within our greatest export market," says Joshua Mahony, an analyst with IG.

The data corroborates the findings of other surveys which also point to an uptick in activity for the sector with the CBI reporting in their latest industrial trends survey that production among UK manufacturers grew at the fastest pace since January 1995 in the three months to July.

Scott Bowman, UK Economist at Capital Economics says the three-month average of the survey’s output balance is consistent, on the basis of past form, with a quarterly gain in manufacturing output of almost 1% is well above the 0.5% contraction reported in the first estimate of Q2 GDP.

Of interest, the Manufacturing PMI report shows exports are picking up as the soft Pound combines with an increase in global business activity to stimulate demand for UK-produced goods.

The report notes a significant boost from the trend in new export business, as foreign demand rose at the second-strongest rate in the series history, beaten only by that recorded in April 2010.

Companies reported improved inflows of new work from clients in North America, Europe, the AsiaPacific region and the Middle-East. The domestic market also remained a positive contributor to order books, although not to as great an extent as signalled earlier in the year.

“The manufacturing sector remained on terra firma this month, with a sustained rise in new orders, overall activity, new jobs, and with strong optimism to boot,” says Duncan Brock, Director of Customer Relationships at the CIPS.

There was also good news for the Euro, however.

Analysts note that data published in the last couple of days show that solid and broad-based GDP growth is finally starting to be accompanied by early signs of life in core inflation, which, if confirmed, would indicate that macro numbers look increasingly on track.

"This strengthens the case for an ECB tapering announcement in autumn," says Marco Valli, Head of Macro Research at UniCredit Bank in Milan.

The promise of a tapering of the ECB's extraordinary monetary stimulus plan has driven the Euro higher through the course of 2017, but there are risks.

Valli also warns that the rising Euro could be its own worst enemy as the ECB will be monitoring financial conditions and a rising Euro might place downward pressure on both growth and inflation as the cost of imports falls.

In trade-weighted terms, the euro is up by about 2% since Draghi’s speech in Sintra, and by about 4% relative to the technical assumptions used for the June ECB forecasts.

There is a chance the ECB could delay the tapering call if the Euro's upward rally does not fade and currency traders betting on a stronger single-currency might be disappointed.

Sterling could recover lost ground this week if prevailing rates around 1.15 succeed in drawing bargain hunters from the woodwork. 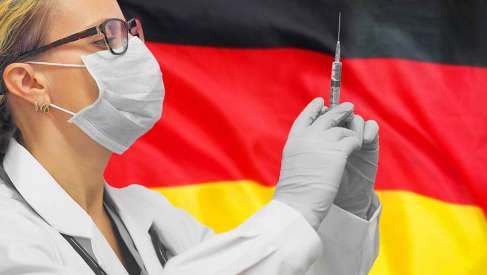 Pound Sterling Heads for Biggest Weekly Drop against the Euro Since Sept. 2020 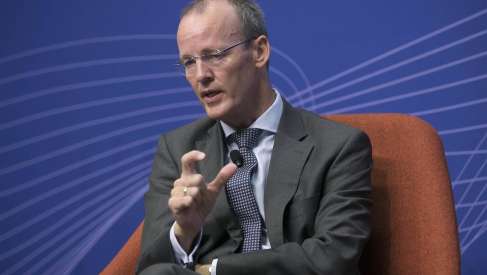 The Euro was seen trading higher mid-week with analysts saying at least some of the gains can be attributed to a member of the European Central Bank saying emergency measures introduced to deal with the pandemic could be fazed out as soon as September. 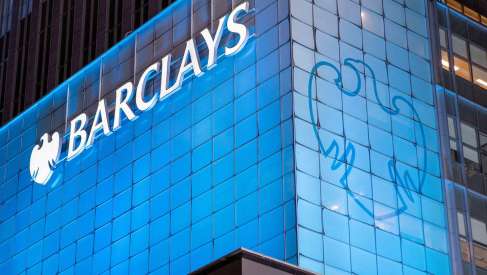 Pound Sterling Dips, but Barclays Look to Buy it against the Euro