The Euro to Pound Sterling exchange rate (EUR/GBP) could remain under pressure in the near-term if analyst Robin Wilkin at Lloyds Bank is correct.

Wilkin - a technical strategist - believes the Euro is overbought against the Pound and must atone for its recent exuberance.

“The sideways 'flag' type action in the last day or so, suggests there is room for a deeper correction in the cross,” says Wilkin in a briefing dated July 26. 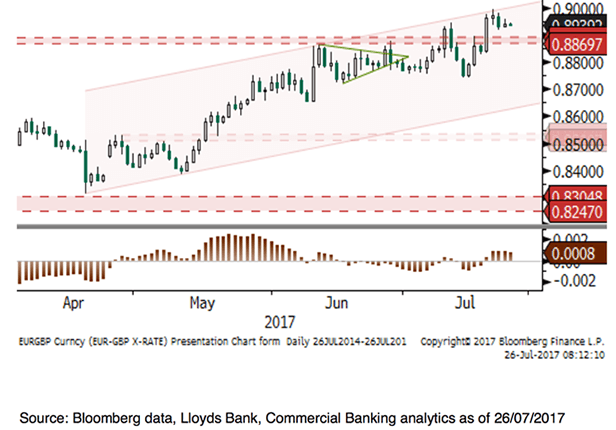 Technical analysts study the underlying dynamics of the foreign exchange market to try and establish where a currency pair might be going next.

Wilkin would ideally look for this area to hold if this cross is going to extend the trend from the April lows towards 0.9175/85 resistance.

Turning this around for those watching the pair from the Pound to Euro perspective, Wilkin is suggesting an upside bias might be in place over coming days as the Euro unwinds from overbought conditions.

The 1.1230-1.1274 region is seen as key trend resistance that is likely to test Sterling’s strength. Note at the time of writing the exchange rate is at 1.1220 which hints that maybe this level has yielded and the door to further gains is now open.

However, a break above 1.1344 is needed to suggest a bottom has been put in place and that Sterling has a shot at redemption.

So pencil this level in.

Also studying this market is Karen Jones, a technical strategist with Commerzbank.

Jones is a little more bullish on the Euro's prospects against Sterling, but like Wilkins reckons a period of consolidation is likely.

"The 13 count on the daily chart suggests we will see some near term weakness," says Jones, "we would not be at all surprised to see a small retracement ahead of any further strength towards 0.9059," says Jones.

This equates to 1.1038 in GBP to EUR terms - this represents the low-point reached by GBP/EUR back in October 2016.