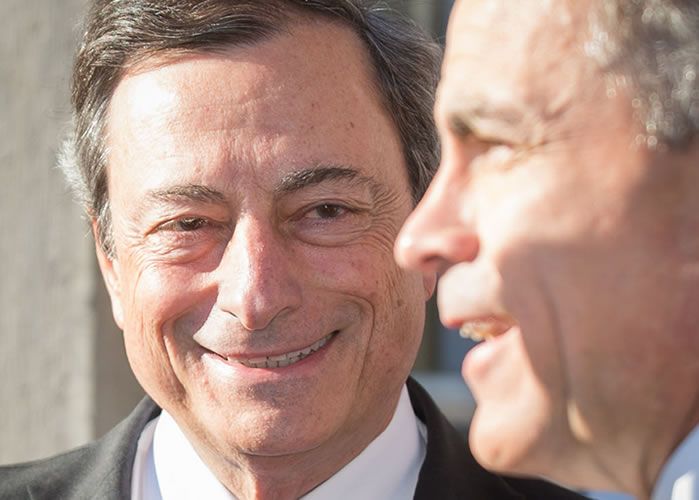 The Euro could struggle in 2017 if expectations for another two extensions to the ECB's quantitative easing (asset purchase) programme are announced.

Expectations for the extension of the European Central Bank's asset purchase programme to be extended beyond its March deadline are almost at 100% amongst economists.

Indeed, most see the extension to be announced at the ECB's December 7 meeting.

“We still expect the ECB to extend QE purchases by six months at the meeting in December, given our view on core inflation and the view that the ECB is aware that not extending the programme could trigger a strong sell-off, especially for periphery bond markets. It is still an open question whether the ECB will change the rules regarding purchases,” says Danske Bank’s Chief Analyst Allan Von Mehren.

The strong demand for European bonds will ensure the yields on those bonds remain low which in turn has ensured the Euro struggles to gain traction against the Dollar and even Pound Sterling, as witnessed of late.

But, what is interesting is the argument made by Danske Bank that the ECB will announce another extension to its asset purchase programme in 2017, this in addition to the extension that is likely to be announced in December.

In a client briefing Danske say:

"Looking into next year, we believe there is a more than a 50% likelihood that the QE programme will again be extended, which is not in line with consensus.

"In our view, wage and core inflation will remain too low for the ECB to change its stance on monetary accommodation in mid-2017, implying a third QE extension is likely to be announced.

'Overall, it will be hard for the ECB to bring inflation back towards 2%, as core inflation historically has only added 1.0pp to headline inflation and as the upward trend in particularly the oil price has weakened significantly."

This should cap any Euro strength as we head through 2017.

However, the debate is expected to shift quite quickly beyond the extensions forward-looking markets will be looking ahead to whether the ECB starts laying the ground for the ending of its bond purchase programme.

Danske already see signs from the bond markets that they are pricing in a hike in 2018 with Von Mehren noting:

“We assume that the market will start to focus on this issue (ECB tapering) in 2017 and that it will add to the steepening tendency of both EUR 2Y10Y and 5Y10Y yield curves, in 2017.

“Note in this respect that we have already seen 5Y EUR rates moving some 30bp higher since the start of October and that the market is starting to price a probability of a hike in early 2018.

“We think this is far too early."

Analysts reckon that tapering the asset purchase programme certainly poses risks to their view but their conviction is that the ECB will be of the view inflation remains too week.

"Prominent ECB members including President Mario Draghi have increasingly emphasised the lack of upward pressure on underlying prices, which together with an expected considerable downward revision to the ECB’s core inflation projection, should convince enough of the Governing Council members that it is too early to consider inflation being sustainably high," say Danske.

Forexlive’s Adam Button believes December will be a ‘one and done’ affair.

Commenting on a recent letter from Draghi to another central banker in which he wholeheartedly praises the positive impact on monetary policy on the economy, Button says that:

“To me, when a central banker takes a victory lap, it means they're not going to do more. They're not feeling the pressure and they're satisfied with where they're at.”

Button sees the ECB extending asset purchases one more time in December (for another 6 months beyond the March end date) as well as expanding the eligible criteria for these purchases to ensure the programme can find the assets to meet its objectives.

Draghi sees Risks in his Actions

Boosting the asset purchase programme will be done despite whatever negative side effects the ECB itself sees its programme of hoovering up European bonds as posing.

Draghi flagged up “significant vulnerabilities” in the real-estate markets of no less than eight EU countries: the UK, the Netherlands, Sweden, Austria, Denmark, Belgium, Finland, and Luxembourg.