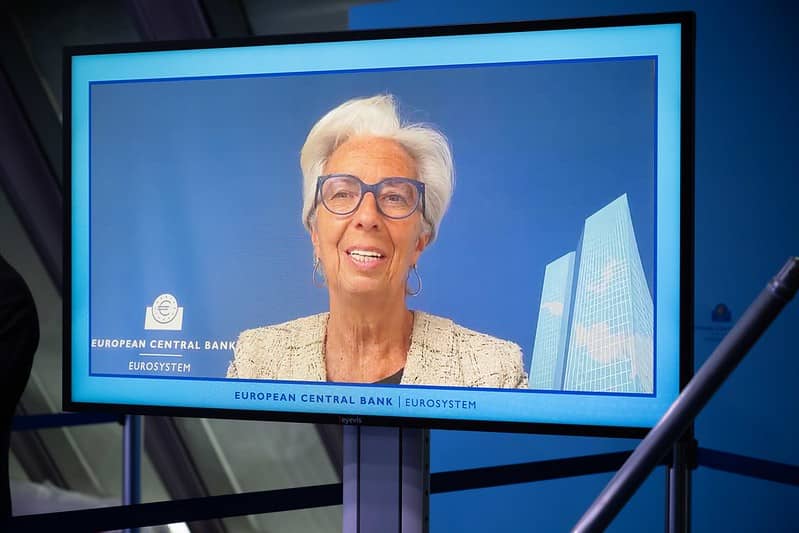 The Euro jumped across the board after the European Central Bank raised interest rates by 50bp points an announced the creation of a new mechanism to ensure the Eurozone's diverse financial system remains stable amidst rising interest rates.

The 50bp hike is greater than the 25bp move that markets had been expecting until earlier this week when anonymous press briefings out of the ECB hinted that a more aggressive move would be forthcoming.

The ECB meanwhile announced the creation of the Transmission Protection Instrument (TPI) which will contain any rises in the yield paid on sovereign bonds in countries such as Italy.

"The TPI will be an addition to the Governing Council’s toolkit and can be activated to counter unwarranted, disorderly market dynamics that pose a serious threat to the transmission of monetary policy across the euro area," said the ECB in a statement.

The biggest test of the ECB's July policy decision was always going to be how the ECB responded to any acceleration in bond yields in 'peripheral' Eurozone countries as interest rates rise.

Such an acceleration could have meant heavily indebted countries such as Italy would struggle to meet their debt obligations, raising fears the Eurozone would ultimately fragment without a detailed plan from the ECB.

The Euro's rally on the announcement of the TPI suggests the market is convinced something of a credible solution has been found: 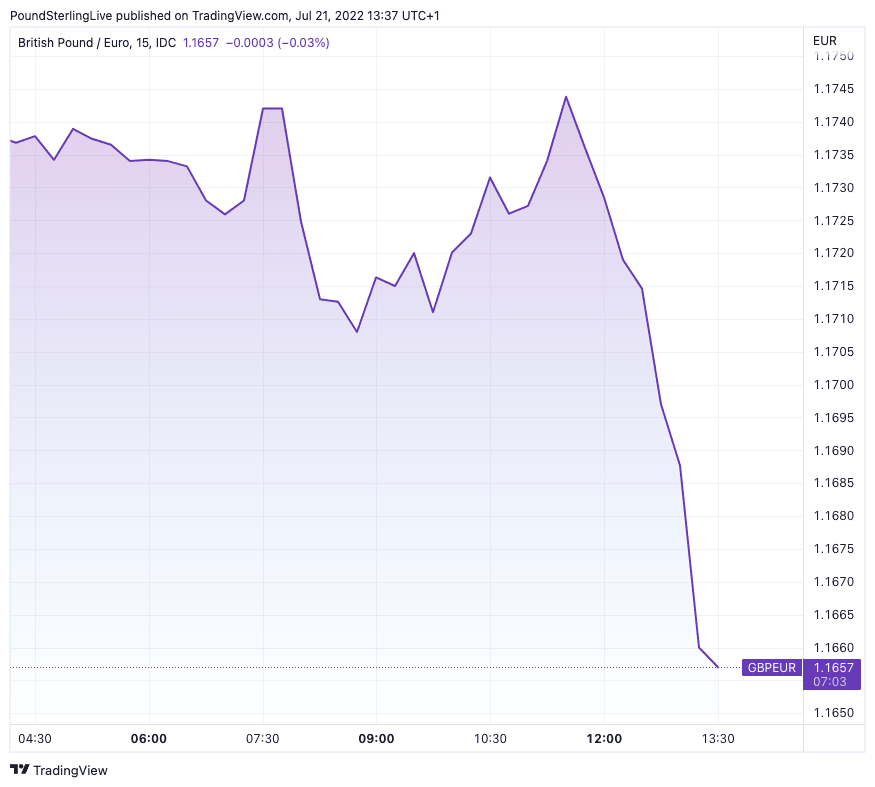 Above: GBP/EUR at five minute intervals.

"The euro surged higher after the ECB decided to hike the main deposit rate by 50 bp to zero, and introduced a new tool to counter “unwarranted, disorderly market dynamics," says analyst Fawad Razaqzada at City Index.

The Pound to Euro exchange rate is down 0.93% on the day at 1.1660 at the time of writing, bank accounts are quoting euro payment rates at around 1.1430 and specialist FX providers are quoting 1.1630.

The Euro to Dollar exchange rate is meanwhile higher by 0.60% at 1.0245 with banks offering dollar payments around 0.9969 and FX specialists offering rates back above parity at 1.0225.

Notably, in the press conference following the decision's announcement, ECB President Christine Lagarde said the EUR/USD exchange rate's recent fall played a role in going for 50 instead of 25.

The market appears particularly welcoming of the ECB's decision to make the TPI unlimited in scope, i.e. there are no restrictions on the support the ECB would provide to a distressed country.

"The scale of TPI purchases depends on the severity of the risks facing policy transmission. Purchases are not restricted ex ante," said the ECB.

By raising interest rates 50bp move the ECB has in one stroke brought an end to its negative interest rate policy.

"A historic day for the European Central Bank. For the first time since 2011, the Bank has hiked interest rates and did so with a bang. Hiking rates by 50bp and softening forward guidance shows that the ECB thinks the window for a series of rate hikes is closing quickly," says Carsten Brzeski, Global Head of Macro at ING Bank.

The ECB had signalled a more benign 25bp move was likely at the occassion of its June policy update, but this week floated the prospect of a more decisive 50bp move via anonymous media briefings.

"It is appropriate to take a larger first step on its policy rate normalisation path than signalled at its previous meeting...This decision is based on the... updated assessment of inflation risks," said the ECB. 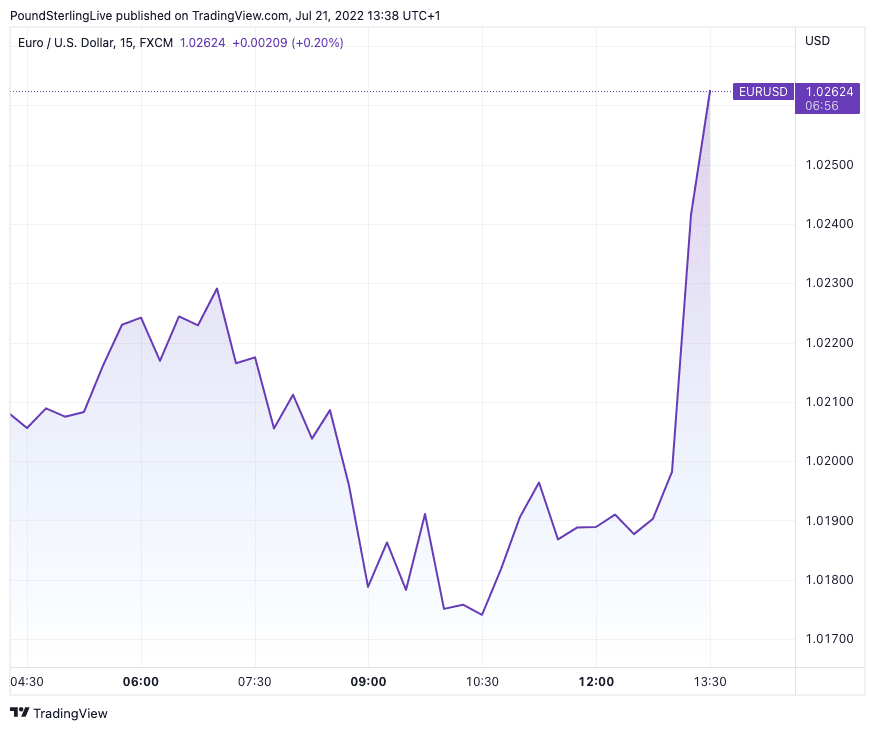 Above: EUR/USD at five minute intervals.

Brzeski says the hike, as well as potential further hikes, are all aimed at bringing down inflation expectations and to restore the ECB’s damaged reputation and credibility as an inflation fighter.

"Today’s decision shows that the ECB is more concerned about this credibility than about being predictable," he says.

ING says the decision to start off the hiking cycle with a 50bp move suggests the ECB will not be able to deliver as many rate hikes over the next 12 months as markets had priced in after the June meeting.

In another major development the ECB's Governing Council signalled "further normalisation of interest rates will be appropriate" but that it would now shift to "a meeting-by-meeting approach to interest rate decisions" which would be "data-dependent".

This effectively means the central bank has all but departed from providing detailed forward guidance, in a similar manner to the Bank of England.

It's the TPI that Counts

Regarding the Euro's longer-term outlook, it is the announcement of the TPI that is potentially more significant than the rate hike.

The ECB said there would be four criteria for a the deployment of the TPI:

The Euro was seen to be giving back initial gains as ECB President Christine Lagarde addressed the press.

There was no obvious statement or slip of the tongue to explain the moves and therefore this could be a classic "sell the fact" move by currency markets.

Such behaviour is typical of such big occassions and therefore the final verdict will only likely be delivered once the day's closing levels are in. 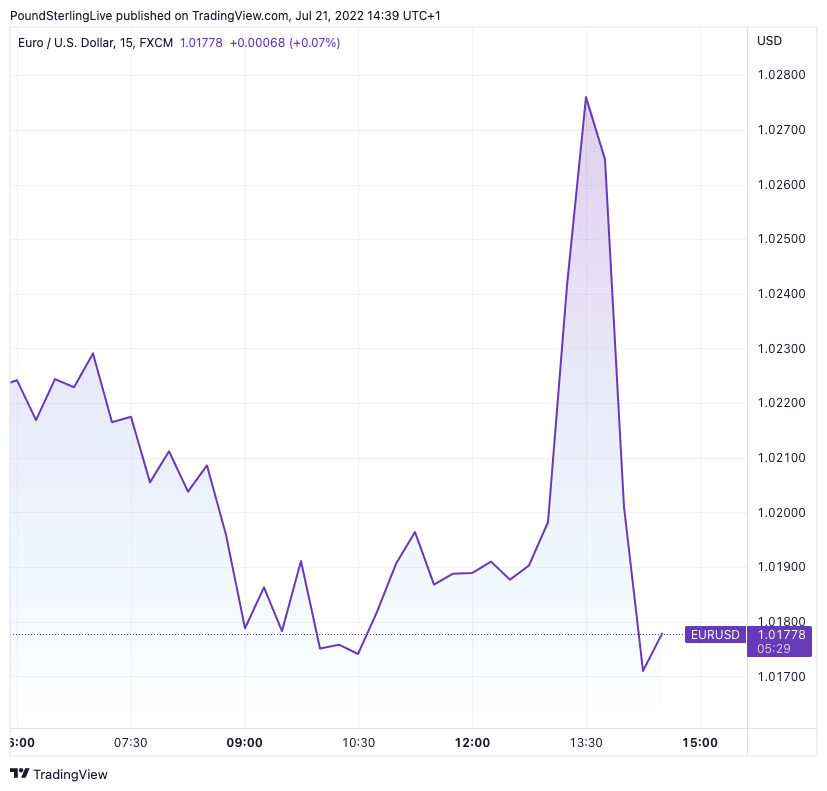 Lagarde said the ECB would rather not use the TPI, but won't hesitate to use it if we have to, a comment that might have contributed to the Euro going lower.

"From Lagarde's commentary so far, it looks like the TPI is more likely to be some sort of word salad, as opposed to a credible bazooka / howitzer," says Brent Donnelly, CEO of Spectra Markets. "Market sells EURUSD on the cringe-worthy "Voila!".

"As regards the TPI, the press conference was rather confusing," says ING's Brzeski. "The ECB doesn’t clarify what kind of market developments would trigger purchases."

Brzeski explains further that a country doesn’t have to apply for ECB support, this is up to the ECB’s discretion.

"All in all, it could work as conditions are lighter than with previous programmes and the size is unlimited. It might not be a whatever-it-takes but rather a whatever-we-want tool," he says.