- GBP/EUR fails to recover 1.20 handle ahead of weekend.

The Pound has faltered in its uptrend against the Euro and now opens the new week in neutral territory as some strategists suggest the acrimonious tone of talks between the UK and EU could soon weigh heavier on Sterling.

The Pound-to-Euro rate closed last week nearly a full percent lower after suffering heavy losses on Wednesday that have dragged it back beneath the 1.20 threshold, and some leading technical analysts now have a neutral outlook for the exchange rate in the next five days.

“Prices are trying to reverse,” says Robin Wilkin, a cross asset strategist at Lloyds Bank. “We highlighted some divergence between price and momentum suggesting vigilance to a turnaround, we now need to see a push through [1.1862-1.1918] to confirm that is the case and that the market is returning to the previous range environment. A reversal and weekly close [above 1.2121] would be significant from a longer-term perspective.”

Wilkin says the outlook for the Pound depends on whether a fall beneath 1.1862 or a rise above 1.2121 is seen first, with a break to the up or the downside likely to generate follow-through momentum.

However, he also says a break above the 1.2121 level would clear Sterling’s path toward 1.2820 which has not been seen since the month before the Brexit referendum. Others are also conscious of this possibility. 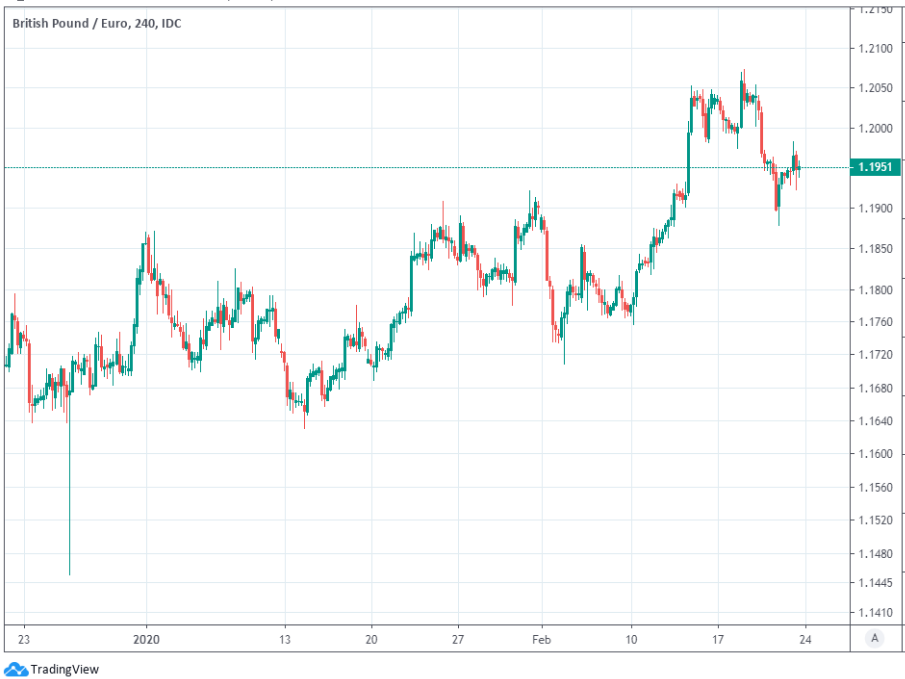 “EUR/GBP is currently testing important technical support levels between 0.8300 and 0.8350 which is where the post-Brexit referendum lows are located. A decisive break below would open the door to another leg lower towards the 0.8000-level,” says Lee Hardman, a currency analyst at MUFG.

Hardman says a move above 1.2048 by the Pound-to-Euro rate would indicate that a visit to the 1.25 level is likely, which would put Sterling at its highest since a week before the referendum. However neither 1.28 nor 1.25 are expected to be seen in the week ahead.

Instead this week is expected to see the the Pound consolidating between 1.1862 and 1.2121 as markets investors digest the opening positions of boths sides in the Brexit negotiations while taking cues from international developments such as the spread of coronavirus and the market’s effort to estimate the impact it might have on the global economy.

“Rallies will need to overcome the downtrend for attention to revert to the .8606/10 nearby resistance. A close above .8610 is needed to negate downside pressure ,” says says Karen Jones, head of technical analysis for currencies, commodities and bonds at Commerzbank, of the EUR/GBP rate.

Jones says the Pound-to-Euro rate should remain biased toward the upside so long as it remains above the 1.1614 level. 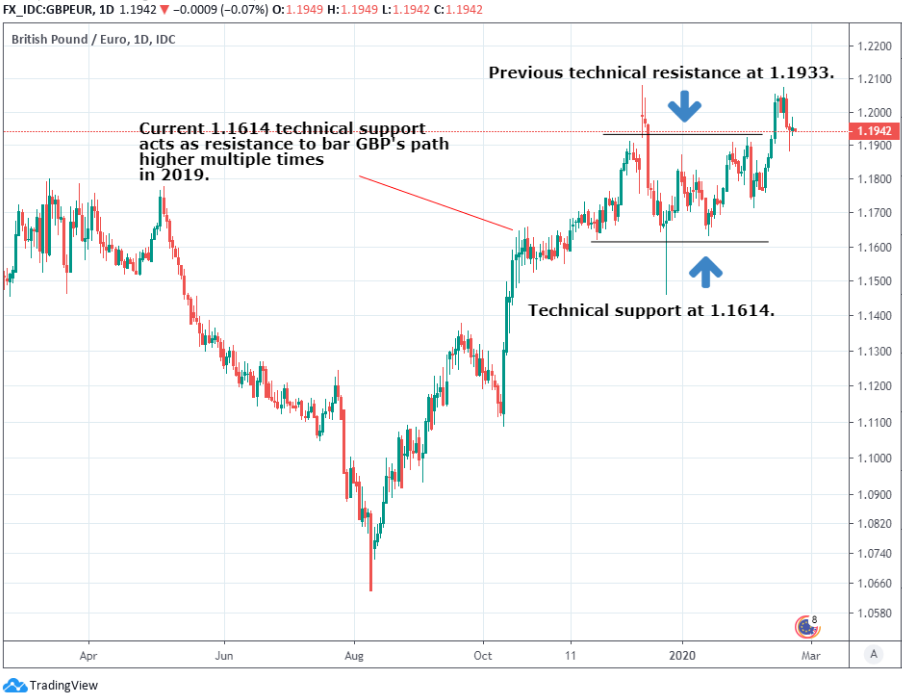 Pound Sterling ceded ground to most rivals last week and with the economic data calendar falling quiet for the week ahead, the Sterling-negative tone of the Brexit negotiations and other international factors are expected to drive price over the coming days.

“The first official data for January piled more evidence onto our view that the economy will rebound in Q1 2020 after hitting a nadir in Q4 2019. But the growing impact of coronavirus on China's economy and the weakness in the euro-zone threaten to stifle UK GDP growth over the next few months,” says Thomas Pugh, an economist at Capital Economics.

Beyond the Brexit talks, Pound Sterling will be driven by risk appetites and the movements of other currencies. And risk appetite has for weeks been driven by the ebb and flow of market concerns over the coronavirus that’s now escaped China’s borders.

South Korea, Japan and Italy reported small clusters of coronavirus cases last week, stoking fears that the outbreak of the deadly pneumonia like disease could drag on for longer than was initially envisaged by investors and do more economic damage. South Korea raised the alert level to its highest at the weekend after the number of infections surged from 204 on Friday to more than 600 Saturday, while Italy has quarantined villages and towns in the north after it discovered a total of 130 cases - up from single digit numbers on Friday.

“There is growing evidence that the prolonged shutdown of much of China’s economy could restrain UK manufacturing output and possibly even retail sales over the next couple of months. Indeed, the economic fallout from the coronavirus means the global economy may not grow at all in Q1,” says Pugh.

The Euro rose against a majority of major rivals last week, aided at the last minute by better than anticipated PMI data and a Friday retreat by the Dollar, although some strategists say the recent bounce by could draw fresh sellers from the woodwork in the week ahead.

Europe’s single currency scored its second consecutive gain Friday after IHS Markit surveys stoked potentially misplaced optimism about the outlook and as the Dollar retreated from earlier highs, although few analysts see the nascent bounce off multi-year lows as having legs to go much further.

“Similar to what we saw earlier this week, a German survey may ignite the downtrend in EUR/USD,” says ING’s Turner. “The EUR still appears in an unpleasant position: the economic outlook for the eurozone keeps worsening and its funding characteristics still prevent it from taking full advantage of rebounding risk sentiment. When adding that the dollar may continue its bull run or at least remain relatively supported, we look for some downside towards 1.07 in EUR/USD next week.”

The economic data calendar also falls relatively quiet with this week being devoid of any major data points, although markets will scrutinise Monday’s German Ifo Business Climate index reading closely for clues on the current condition of the Eurozone economy.

Consensus is for the Ifo index to dip slightly from 95.9 to 95.0 for February when it’s released at 09:00 London time Monday, although ING’s Turner says that a disappointment would push the Euro-to-Dollar rate beneath the 1.08 threshold in a decisive way, potentially exposing it to a deeper decline.

“The big unwinds in long EURUSD are yet to be fully done. More news of shutdowns/virus cases over the weekend would likely put us back on the path to a grind higher in USD pairs in G10,” says Jordan Rochester, a strategist at Nomura.

Markets will use the Ifo survey to gauge the likely pace at which the continent’s economy is slowing and they’ll also be looking for signs of a coronavirus impact on activity. Europe’s factory sector has deep links with the Chinese sector that’s shut its doors as authorities attempt to contain the coronavirus.

Europe was hurt more in the U.S.-China trade war than either of the two protagonists and with the world’s second largest economy now having come close to a standstill as a result of the virus spreading there, investors and analysts are increasingly anticipating a knock-on growth hit to Europe.

“Data from China is traditionally patchy over New Year, and the virus is expected to lengthen this process. It may take until June for accurate data to be released. China’s economy has been running at 40-50% capacity over the last week. Capacity utilisation at major Chinese ports has been 20-50%, and storage warehouses are nearly full,” says Geordie Wilkes, head of research at Sucden Financial.

A further Eurozone slowdown would risk widening the differential between GDP growth in Europe and the pace of expansion in the U.S., which has been a key driver of the Euro-to-Dollar rate in recent years. And for this reason the Euro will also be responsive in the week ahead to coronavirus headlines, especially as the U.S. economy and Dollar are thought to be less exposed to a Chinese slowdown.