- GBP/EUR to go lower as ‘trend is your friend’

- Fly in ointment is move is looking oversold

- Pound to be driven by Brexit politics; Euro by ECB meeting

The British Pound remains caught in a downtrend against the Euro, and based on technical studies and the overarching political backdrop, we would expect downside pressures to remain in charge for the forseeable future.

The Pound-to-Euro rate is trading higher at 1.1283 after falling another cent in the previous week.

Pound Sterling took another lurch lower against the Euro on Friday, breaking below the psychologically-significant 1.13 level as the GBP/EUR exchange rate endured its worst month since 2017.

Declines come amidst a growing expectation for a 'no deal' Brexit on October 31 as the Conservatives looks to select a leader who will adopt a tougher approach to Europe in the face of the party's plummeting support.

What does the outlook for the Pound-to-Euro exchange rate look like from here, what trends should we be watching for and what targets are possible over coming days?

From a technical perspective, the trend remains bearish after breaking to new lows last Friday. Given the old adage that ‘the trend is your friend’ it is expected to continue lower in the week ahead. 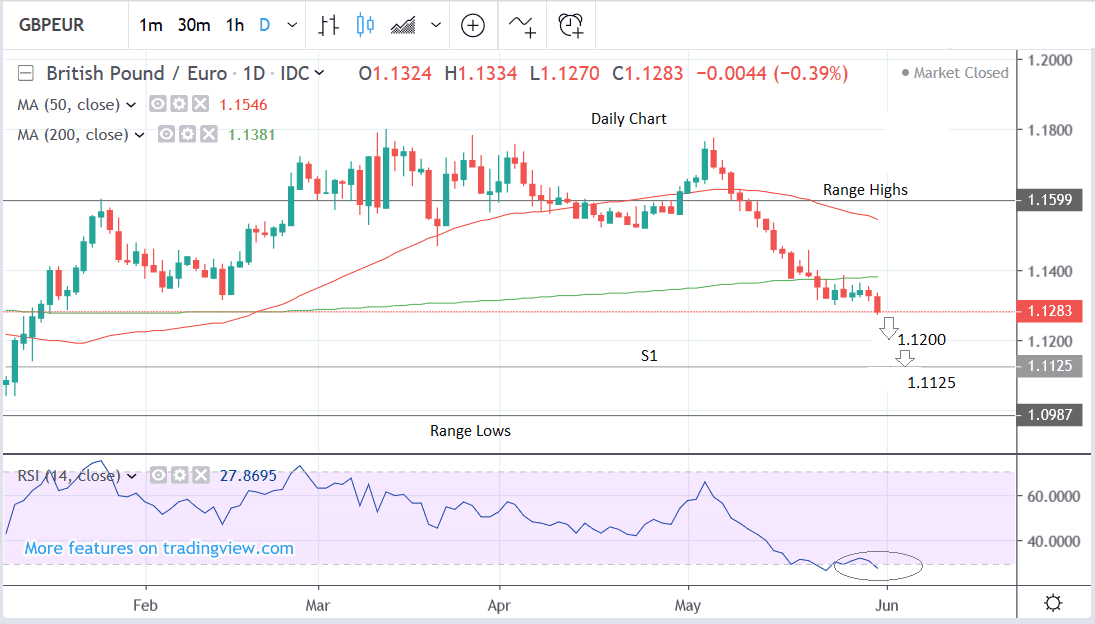 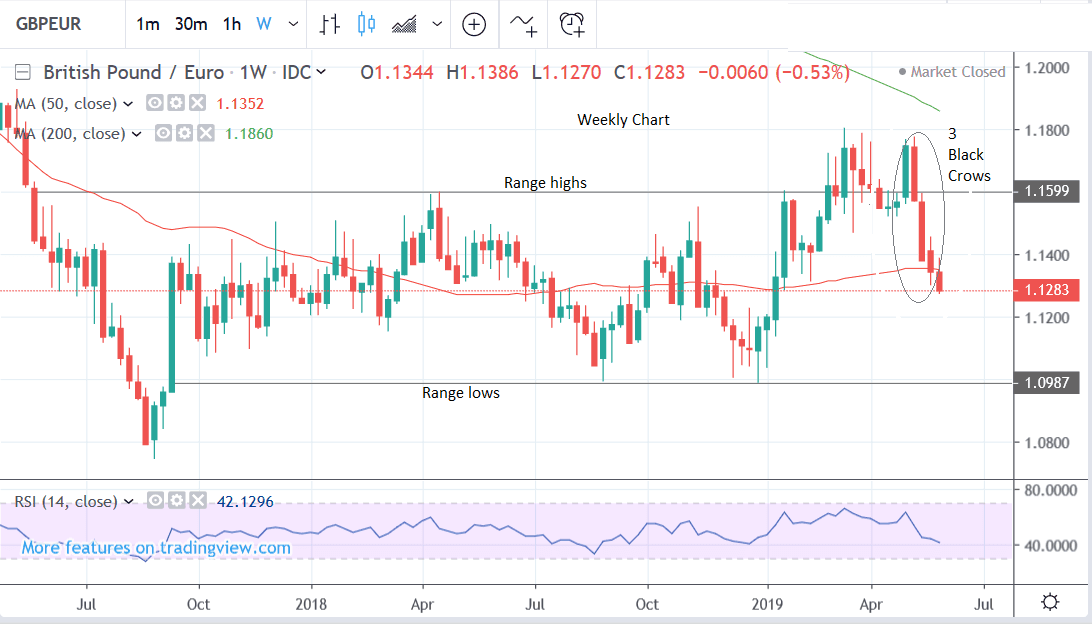 The weekly chart shows the pair’s longer-term roadmap and how it has broken back inside its long-term sideways range at the start of May, after failing to hold its break out at the end of April.

It also shows the pair has formed a bearish ‘3 Black Crows’ candlestick pattern in May, which is composed of three consecutive down weeks following a significant peak (circled).

Not all indicators are bearish, however, and traders should beware of getting too negative at this late stage in the downtrend. One sign that contradicts the bearish case is that the RSI momentum indicator has just moved into oversold territory, which is below 30 (circled on the daily chart ).

Despite this contrary signal from RSI, the strength of the downtrend, which saw a record 14 uninterrupted down days in a row, suggests a strong bullish context, and the lack of a resolution on Brexit and all-in-all it suggests more downside is still quite possible.

Also, momentum indicators such as RSI can remain in the oversold zone for long periods of time during which the market can go lower, and at 27.86 the RSI is not all that oversold and has scope to go even lower to sub 20 if bears continue to push the market down.

The main focus for the Pound over the coming week will continue to be political, as the ruling Conservative Party prepares to choose its next leader and the country's next Prime Minister.

Key for Sterling will be the future leader's stance on Brexit.

The current favourite, Boris Johnson is a known 'Brexiteer', and recently said that if he were PM, he would take the UK out of the EU on October 31 “with or without a deal”.

The contest is composed of several rounds. The first is held in Parliament and only involves Conservative MPs in the vote to decide a shortlist of two who are then put to a broader vote amongst party members. If Johnson can get into the final shortlist he will probably be next leader.

"The No Deal Brexit option will likely be the defining feature of the Tory leadership contest, as opposed to a leverage tool to be used primarily to extract better conditions in negotiations with the EU. This possibility becomes more urgently negative for GBP and for UK assets if one expects, as our economists do, that Boris Johnson may be inclined as a newly minted PM to call for new elections, aiming to create a parliamentary arithmetic that does not preclude a No Deal outcome," says Shahab Jalinoos, a currency strategist with Credit Suisse.

Jeremy Hunt is the favourite amongst the party membership at present, and he opposes a 'no deal' Brexit.

Regardless, whichever candidate espouses the toughest line on Brexit and potential future negotiations with Europe will likely win the final vote held by the party's membership.

This has increased downside pressure on Sterling because if the EU is unwilling to negotiate a better deal, and the next leader is a Brexiteer, it increases the chances of a 'no deal' Brexit in October.

Further complicating the outlook for Sterling is the possibility that in the event the UK were about to leave without a deal Parliament does have the power to vote down the government in a vote of no-confidence. The chancellor Philip Hammond, for one, has already said he is so against a ‘no-deal’ that he would vote against his own party if such an eventuality happened, in order to put “the national interest before party interests”.

If the government were voted down in a vote of no-confidence there would probably be a general election with an uncertain outcome. Article 50 would probably have to be revoked in the interim with considerable consequences for the chances of a Brexit ever being revived.

The outlook is decidedly murky, and therefore it is difficult to see Sterling enjoying any upside potential until this raft of issues are decided and certainty is returned to the political outlook.

On the economic data front, the main release on the horizon for Sterling are the IHS Markit PMI surveys.

The Manufacturing PMI survey is forecast to show a fall to 52.1 from 53.0 in May. This is still above the threshold for expansion of 50 but shows slowing activity. The results are released on Monday, June 3 at 08.55 BST.

PMI’s are widely acknowledged to be reliable forward indicators of growth and so a lower-than-expected reading would probably result in a decline in the Pound and vice versa for a higher-than-expected result or rise.

Construction PMI is out on Tuesday, and forecast to remain unchanged at 50.5.

This is the release most likely to have an impact on Sterling as the services sector accounts for over 80% of UK economic activity and therefore offers a better gauge on where the overall economy is headed.

Besides PMIs, there is potential for volatility from the testimony of Mark Carney and other Bank of England officials as they are questioned by the Treasury select committee on Monday, however, he and his colleagues are likely to defer an opinion on interest rates until there is greater clarity on Brexit.

The main event for the Euro is the meeting of the European Central Bank (ECB) on Thursday, June 6 at 12.45 BST. The ECB’s assessment of the economy, its intentions for monetary policy and the level at which it intends to set interest rates is a big driver for the Euro.

The ECB is widely anticipated to make changes the parameters of its cheap loan programme to Eurozone banks, or TLTRO - ‘targeted long-term refinancing operation’ - programme. Simply put, this provides Eurozone banks with cheap liquidity to help stimulate lending to the wider economy. TLTROs are already in operation but instead of discontinuing them the ECB has decided to extend them.

From a currency perspective, easing policies at the ECB keep the Euro under pressure, only when the ECB reverses direction and withdraws stimulus would we expect a substantial and sustainable rise in the value of the currency.

Markets are continually looking for hints as to when that might happen.

The market is unlikely to react much to the announcement as it has been widely telegraphed already, and priced in. It is only in the event that the ECB does not implement TLTROs, for some reason, that the market might react, by pushing the Euro higher, for example, however, this is unlikely.

The other focus of the meeting will be what Mario Draghi says about the economic outlook in the press conference that follows, as well as the wording of the ECB’s official statement on the state of the Eurozone economy and outlook for monetary policy.

In March, the ECB rowed back on its promise to raise rates in 2019 due to the economic slowdown. It now remains to be seen whether the ECB will provide any further guidance. Any suggestion of an even longer delay than that expected by the market of 2020, could lead to a sell-off in the Euro.

This outcome seems unlikely, though, according to analysts at Wells Fargo, who see the economy as having stabilised, and therefore the ECB not likely to consider further easing.

“The economy has not weakened enough to warrant a full reversal into an easing cycle, but it remains a way off from the first rate hike. Our expectation is for the ECB’s policy rates to remain on hold for the remainder of the year, but gradually exit negative territory in 2020,” says Wells Fargo in a preview note.

The ECB probably has more of an incentive to play down any negatives about the outlook at its meeting. Last week German bond yields fell to record lows on the back of large safe-haven inflows after the U.S. president Trump threatened Mexico with tariffs.

Given its commitment to financial stability, the ECB is unlikely to want to drive yields any lower by issuing a negative assessment, as this could create risks of volatility from an asset bubble.

On the hard data front, the other main events for the Euro are the release of unemployment data and inflation data on Tuesday, at 10.00 BST.

Unemployment is likely to remain unchanged at 7.7%, according to consensus estimates; CPI is expected to fall to 1.3% in May compared to a year ago, from 1.7% in April.

A deeper-than-expected slowdown, however, would probably be negative for the Euro as it would suggest even lower demand from consumers, reflective of a slowing economy, and therefore, raise the possibility of more help needed from the ECB easing monetary conditions.