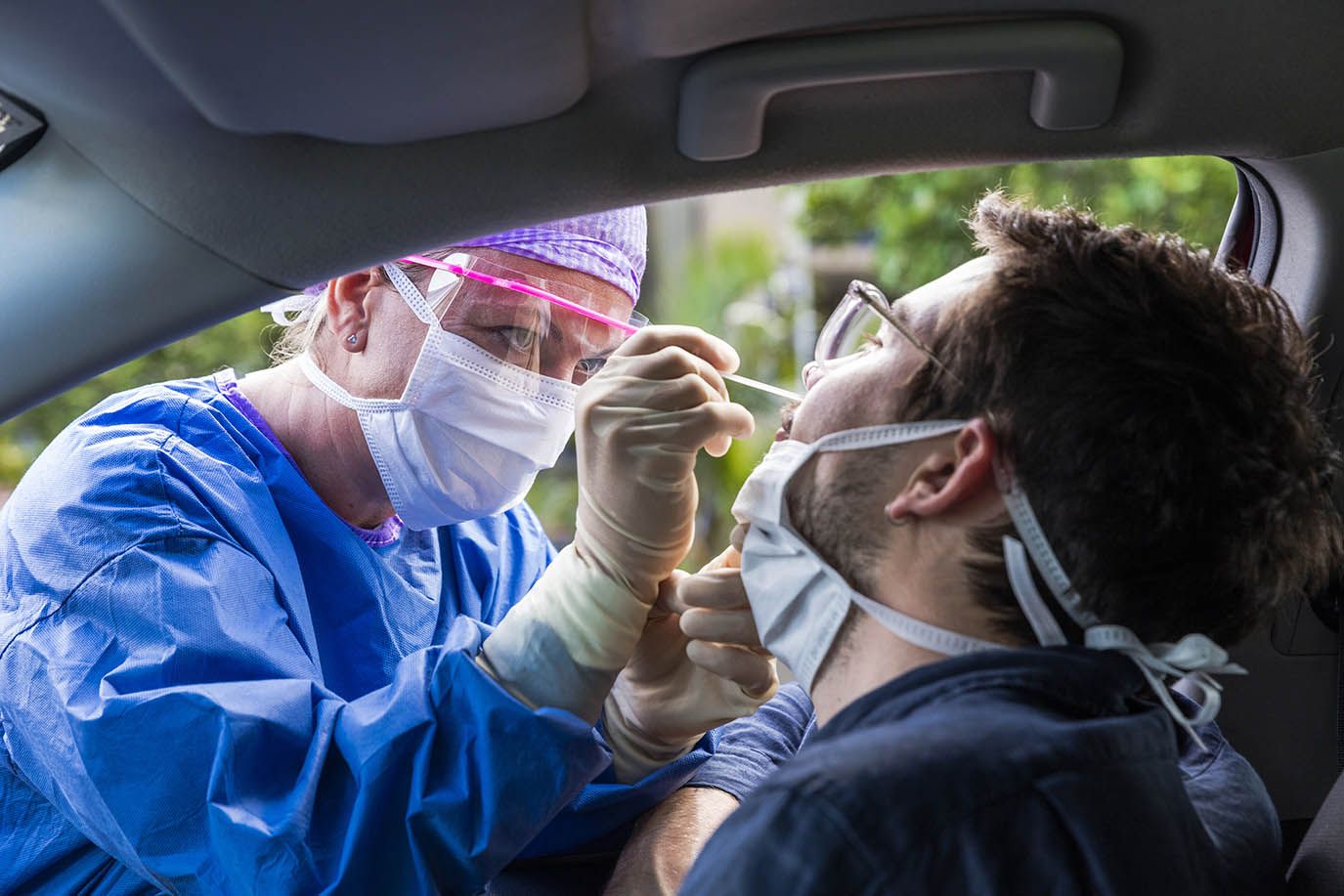 Pressure on the UK's economy is set to intensify as more of England is set to enter harsh 'tier 3' lockdowns over coming days, while it has has been confirmed on Monday Wales is going into an effective full lockdown for two weeks.

Reports say a 16-day 'circuit breaker' lockdown has been imposed on Wales to coincide with the school half term, while Manchester faces tough tier 3 restrictions amidst signs of compromise between the government and local authorities following days of haggling.

The move follows last week's decision to put London into tier 2 restrictions ensuring more than half England's population are now living under heightened restrictions, while on October 07 Scotland announced further restrictions would be introduced on a nationwide basis.

"The recently imposed tiering of restrictions to counter the alarming rise of COVID cases and hospitalisations will take time to show signs of containing the spread of the pandemic. This seems to be unlikely to develop before the end of October. More important will be whether the most restrictive tier of restrictions become more widespread and trigger a second contraction," says Tim Riddell, foreign exchange strategist with Westpac in London.

Concerns for the economy are growing amongst the tightening of lockdowns, with one economist saying anything that amounts to a second national lockdown could set back the UK's economic recovery by an entire year.

"The placement of tighter restrictions across broad swathes of the country would strengthen our conviction that GDP will stagnate over the next few months. A two-week national lockdown at some point could reduce the level of GDP by 5% and set back the economic recovery by a year," says Paul Dales, UK Economist at Capital Economics.

Last week Bank of England Governor Andrew Bailey spoke of scarring to the economy with the second wave of the pandemic set to increase the long-term damage.

In response to the new set of COVID-19 restrictions, Capital Economics have revised down their forecasts and now think that UK GDP won’t rise at all in the last three months of the year and won’t get back to its pre-crisis peak until the end of 2022.

The forecast for flatlining growth is however based on an assumptions that the new restrictions are tightened a bit further, that they last in some form for at least six months and that a 'thin' Brexit deal is agreed before the status-quo transition period ends on 31st December 2020.

All the above assumptions are however in flux given the trend of tightening restrictions and last week's message from Prime Minister Boris Johnson that negotiations with the EU on a post-Brexit trade deal had all but ended.

"The UK has edged closer to another disruptive, albeit potentially short, national lockdown with COVID-19 cases on the rise. With growth in retreat, labour markets could deteriorate further than we currently assume. In such a scenario, the government might have no other choice but to revive support policies that have already been tapered off and the BoE would almost certainly deploy another easing package including: more QE, more forward guidance, lower interest rates and looser capital rules. We still view a rate move immediately into negative territory as unlikely, but an incremental cut to zero would clearly reinforce expectations of further cuts below zero and weigh on the GBP in the near term," says Nikolaos Sgouropoulos, an analyst at Barclays.

The impact of a second lockdown on jobs will be substantial according to economists.

The first lockdown saw the government introduce the furlough scheme that will have saved jobs, indeed, data suggests the majority of the 5.5 million employees who had left the national job furlough scheme by August went back to their jobs.

But, a second lockdown would likely see more companies go under, further demand dry up and margins come under increasing pressure meaning the transition from any further furlough schemes into employment will be lower.

Indeed, there is no guarantee another furlough scheme will be introduced while the tranche of loans made to businesses in response to the first lockdown will be running dry in many firms.

Based on Chancellor Rishi Sunak's furlough offer to businesses closed under Tier 3 lockdown, any second-generation furlough scheme would likely be less generous. Furthermore, the scheme might only be available to businesses shut down completely which would leave the majority of firms in a limbo where earnings are down but staff costs are elevated.

"The bigger picture is that there is worse to come. There is a risk that many of the 2 million or so people who in mid-September were still on partial or full furlough lose their job when the national scheme is wound down at the end of October. That’s particularly the case in the light of the tightening restrictions to stem the resurgence in new COVID-19 cases that will hamper the economic recovery," says Dales.

A survey by Piplsay - a market research firm - shows 59% of respondents who have been furloughed believe losing their job is an immediate concern when the current furlough scheme ends in October.

"The economic impact of fresh covid-19 related restrictions is also likely to be a constraint on the pound. In the three months to August redundancies increased by a record 114K. A spike in the levels of jobless is expected when the UK’s furlough scheme ends this month," says Jane Foley, Senior FX Strategist at Rabobank.

Latest labour market data shows unemployment has risen to 4.5% and on the current path it could reach 9% by year-end say Barclays, with risks to the upside in case of a second national lockdown.

Business Investment Could Stagnate for Years

In the wake of the first covid-inspired lockdown the UK economy suffered "the largest fall in business investment on record," according to the ONS, and the Bank of England and CBI surveys of investment intentions are still consistent with deeply depressed business investment.

According to Capital Economics business investment will remain subdued for longer than other parts of the economy as extremely high uncertainty around Brexit and the evolution of the pandemic is likely to mean that firms don’t want to invest.

Furthermore, a lingering hit to profits and the legacy of higher corporate indebtedness may mean that firms are more risk averse. "This will prompt them to prioritise paying off debt over investment. Smaller firms may also be concerned about access to credit after the Coronavirus Business Interruption and Bounce Back loan schemes end on 30th November," says Dales.

Capital Economics also warn many UK businesses will not need to invest over coming months and even years as many are still operating at well below normal capacity rates, "we think that a large amount of spare capacity in the economy will persist for several years. In this environment, firms will be able to meet a rise in output by bringing idle capacity back online rather than investing in new capacity," says Dales.

The trajectory of the pandemic and the government's response all point to a further slowdown in the UK economy.

However, a risk to this assumption is that some good news becomes available at some point in the coming weeks that prompts a rowing-back against the negativity.

"An easing in restrictions earlier and/or the release of a vaccine would result in the recovery being stronger and faster. But the downside risks, such as even tighter restrictions (e.g. a national “circuit-breaking” lockdown) and a no deal Brexit, currently feel bigger," says Dales.

On Monday it is reported 40M covid-19 vaccines could be heading to the UK in the next two and a half months according to The Telegraph, after Pfizer revealed it had started the manufacturing process.

Pfizer had already revealed it has "hundreds of thousands" of doses ready at its Belgian production plant, but now says it is committed to delivering 100M doses in 2020, of which 40 per cent are earmarked for the UK.

"The two-dose vaccine could potentially enable 20M British patients to be inoculated before the New Year," says the report.

"It's still to finish the clinical trials, it's still to go through the regulatory process, but we do have physical product there available should we be successful," says Ben Osborn, UK Country Manager at Pfizer to the Mail on Sunday. "We are already manufacturing the vaccine at risk and at scale."

Meanwhile, the AstraZeneca / Oxford University vaccine candidate could become available in the UK before Christmas according to numerous media reports.

Professor Jonathan Van Tam, deputy chief medical officer for England, old MPs last week that the vaccine could be ready for a mass roll-out as early as December.