Canada's Dollar was a relative underperformer among major currencies last week and remained close to the bottom of the bucket for the recent month overall while Sterling rose further over the five days to Friday in price action that lifted it into the top half of the G10 league table for the month to November 18.

The combination of these two performances saw the Pound to Canadian Dollar exchange rate briefly overcoming its 200-day moving-average at 1.5850 to reach highs of 1.5982 where it stalled upon contact with the 50% Fibonacci retracement of a downtrend dating all the way back to January 2021.

"The cross does appear to have set a major low and staged a clear bull reversal from the 1.41 spike low reached in late Sep but additional gains may be getting harder to make from here, for the moment," says Shaun Osborne, chief FX strategist at Scotiabank, writing in a recent review of the GBP/CAD charts.

"There is still a lot of residual bearish momentum in this market, notwithstanding the break above major trend resistance, which may curb gains for now. Price signals do suggest, however, that the GBP is finding support on dips. We look for firm support on weakness to the 1.5250/1.5350 range," he adds. 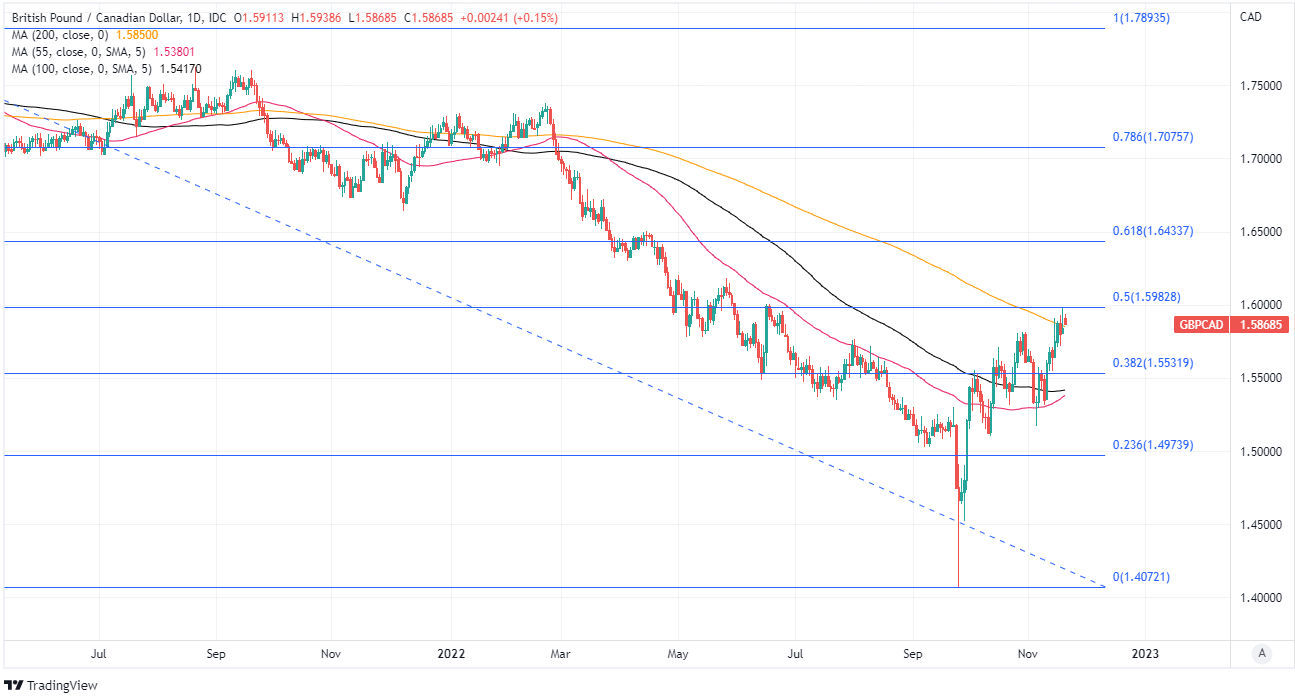 GBP/CAD reached multi-month highs last Friday as stock markets rose across the board and the Canadian Dollar softened alongside the U.S. Dollar in a pattern of price action that was typical of recent times and which will again be relevant for Sterling and the Loonie in the week ahead.

"Much attention has been placed on relative interest rates and particularly the relative terminal rates for the Fed and Bank of Canada, but that doesn't seem to be what is driving USDCAD," says Greg Anderson, global head of FX strategy at BMO Capital Markets, in commentary that is relevant for GBP/CAD.

"The tightest correlation with USDCAD right now is Bloomberg's USD index. USDCAD has mapped on top of BBDXY for the past 2M. Over that interval, USDCAD has been far more correlated with ADXY (an Asian currency index) than with DXY (a mostly Europe-centric USD index)," Anderson adds.

GBP/CAD always tends to closely reflect the relative performance of Sterling and the Loonie when each is measured against the U.S. Dollar so will often appear sensitive to the trajectory of USD/CAD, which Sterling has most recently had a negative correlation with.

This negative correlation makes U.S. Dollar strength a headwind for GBP/CAD and this in turn means that the latest developments in China and Wednesday's release of minutes from November's Federal Reserve meeting may be just as impactful as anything coming out of the UK or Canada this week. 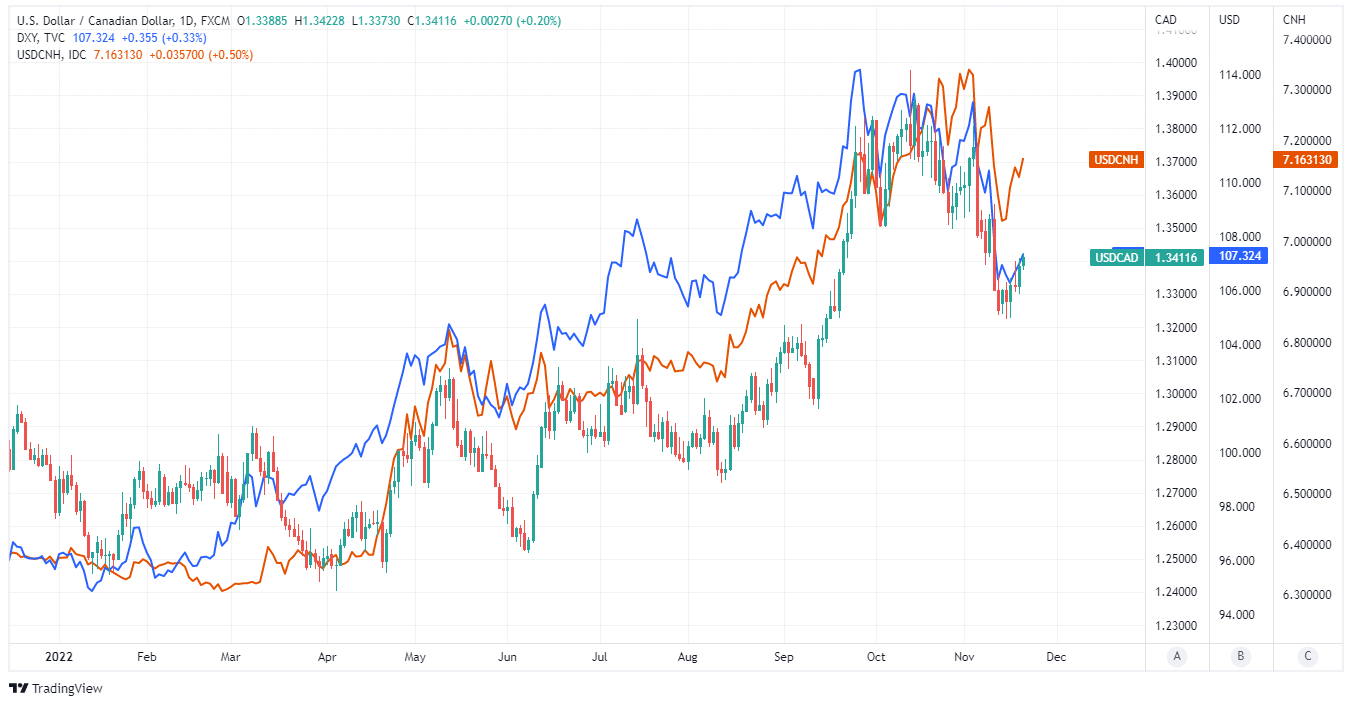 Above: USD/CAD shown at daily intervals alongside U.S. Dollar Index and Dollar-Renminbi rate.

"Despite the government’s latest covid guidelines, several districts in the southern city of Guangzhou have imposed stringent restrictions on people’s movements and business activity," says Joseph Capurso, head of international economics at Commonwealth Bank of Australia.

"Economic conditions and central bank officials’ rhetoric suggest there is more scope for interest rates to increase in the US than in Canada. The relative interest rate outlooks are one reason why we think USD/CAD can ultimately re-strengthen," Capurso and colleagues write in a Monday look at the week ahead.

The U.S. Dollar and USD/CAD could benefit early in the new week and potentially to the detriment of GBP/CAD if Sunday reports of fresh coronavirus-related restrictions in China upset the Renminbi or wider financial markets, although Canadian retail sales data will also be important for the Loonie.

Tuesday's data covers the month of September but will likely contain a preliminary estimate of retail spending in October, which economists and analysts will use to gauge the extent to which Bank of Canada (BoC) interest rate policy is or isn't impacting the domestic economy.

"On that score, the US retail sales figures for October should have caught more attention. While we knew a big gain at auto dealers was coming, the “control” group of core items also surprised to the upside, including a positive revision to September," says Avery Shenfeld, chief economist at CIBC Capital Markets. 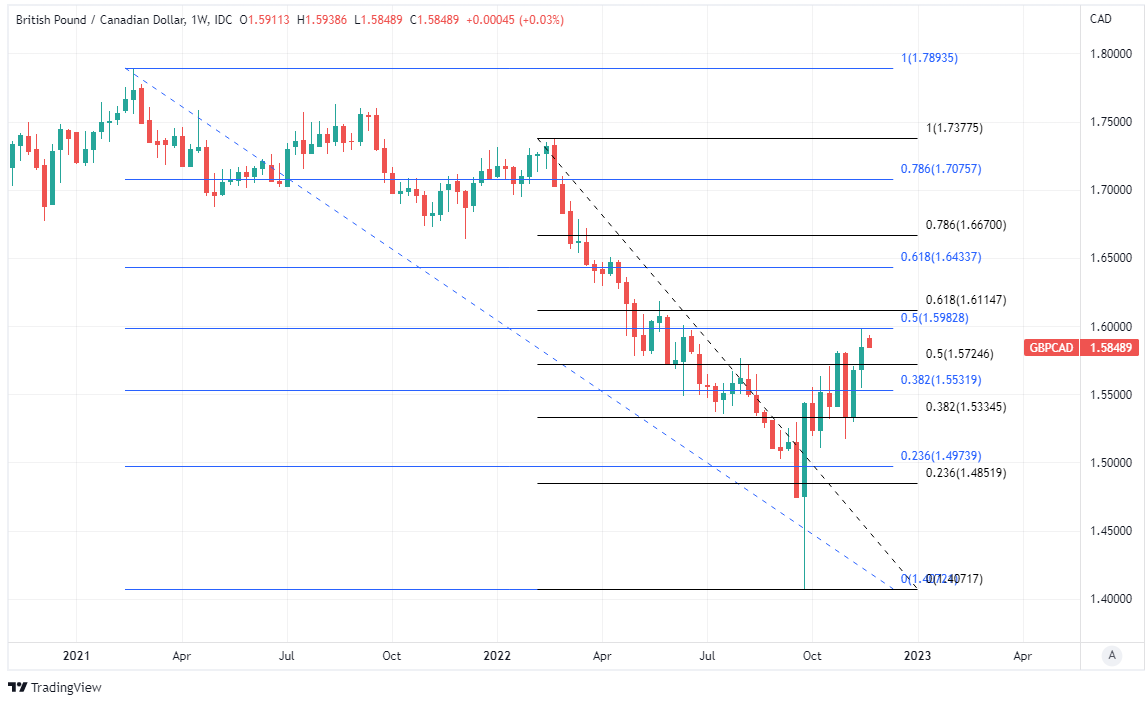 "In Canada, retail sales are likely to bump down in September but show a rebound in the advance reading for October, giving not much direction in terms of views on the consumer sector. As in the US, the story for retailers in Q4 will really be told in Nov/Dec holiday shopping," Shenfeld writes in a Friday briefing.

Tuesday's retail figures are the highlight of the week for the Canadian Dollar but are followed by Wednesday's minutes from the November Fed meeting, which would be an upside risk for the U.S. Dollar and downside risk for GBP/CAD if the market response to November's decision is anything to go by.

The danger is that Wednesday's minutes highlight the Fed's intention to raise interest rates a a top-of-class peak for an extended period of time that would make hard work and a risky endeavour out of betting against the U.S. Dollar or USD/CAD in the short-term.

That could be enough to ensure GBP/CAD remains roadblocked by technical resistance coming from a Fibonacci retracements around 1.5982 this week with its path of least resistance being through corrective declines back to and below the 200-day moving-average at 1.5850.

This kind of outcome might be the most likely for GBP/CAD unless Sterling is able to find inspiration of outperformance of its own in what is a quiet week for UK economic data but also a period in which multiple Bank of England (BoE) policymakers are set to speak publicly.