The Pound to Canadian Dollar rate reached its lowest level since April 2013 this week but could be at risk of falling as far as 1.50 in the weeks and months ahead without a meaningful improvement in the market's appetite for Sterling.

Sterling fell to almost a decade low against the Canadian Dollar this week and continued to carry what remained on Friday a more-than 10% loss for the year after the diverging prospects of the UK and Canadian economies carved a gulf between performances of the two currencies.

GBP/CAD fell briefly to lows of 1.5242 on Friday after entering the year above 1.71 but could be facing an extended period of suppression near to the 1.50 handle if the market continues to give Sterling and other European currencies a wide berth in the weeks and months ahead.

“UK households may collectively need up to £65bn extra in government support to offset the forthcoming rise in energy bills this winter. That would reduce the risk of a deep recession but would lead to extra Bank of England rate hikes,” says James Smith, an economist at ING.

“Markets are right to be thinking about more tightening  even if investor expectations are wildly overestimating its scale,” Smith also said on Friday. 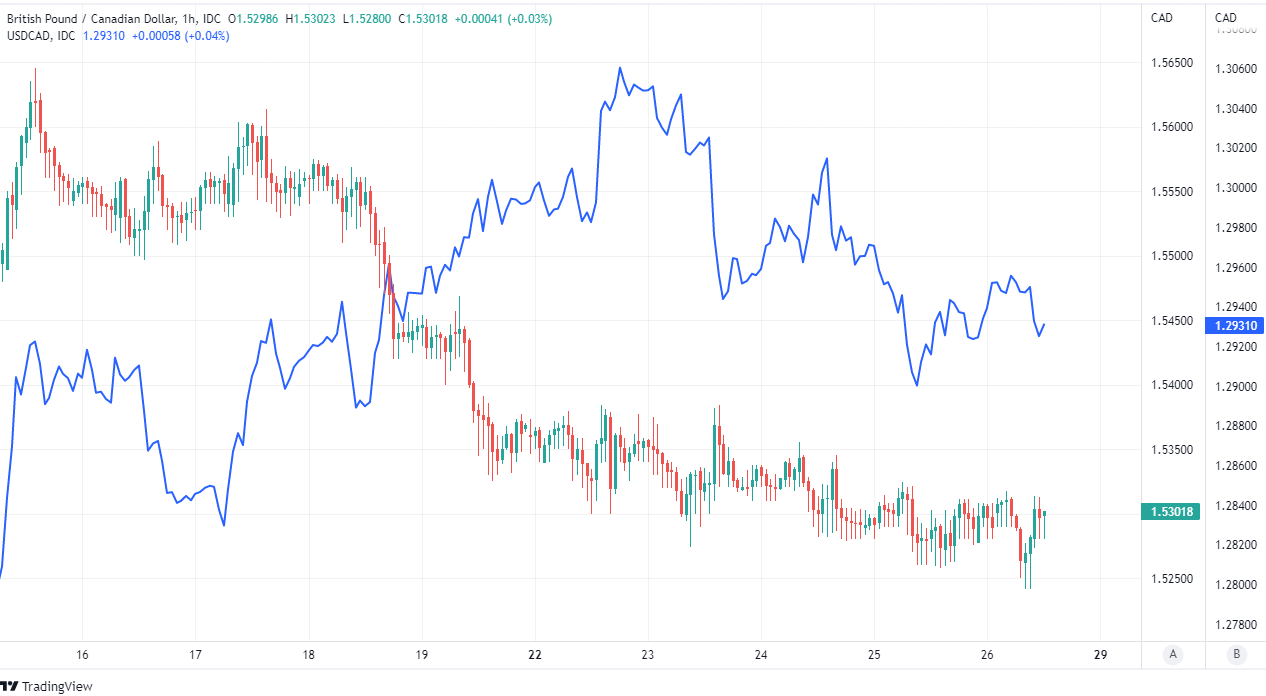 Above: Pound to Canadian Dollar exchange rate shown at hourly intervals alongside GBP/USD and USD/CAD.

Surging costs of imported energy have weighed heavily on currencies and economies in the UK and Europe of late but are a stimulus for Canada’s energy exporting economy and so have not troubled the Loonie, which remained the second best performing major currency of 2022 on Friday.

However, commodity price trends and their relative implications for economies are just one of many sets of factors to have driven the Pound to Canadian Dollar exchange rate lower in recent months, with U.S. Dollar exchange rates also being influential for all currencies.

“The DXY Index has rotated to the top of the list of our rotating financial factor model's most predictive variables for the USDCAD exchange rate over the past 3 months,” says Greg Anderson, head of FX strategy at BMO Capital Markets. 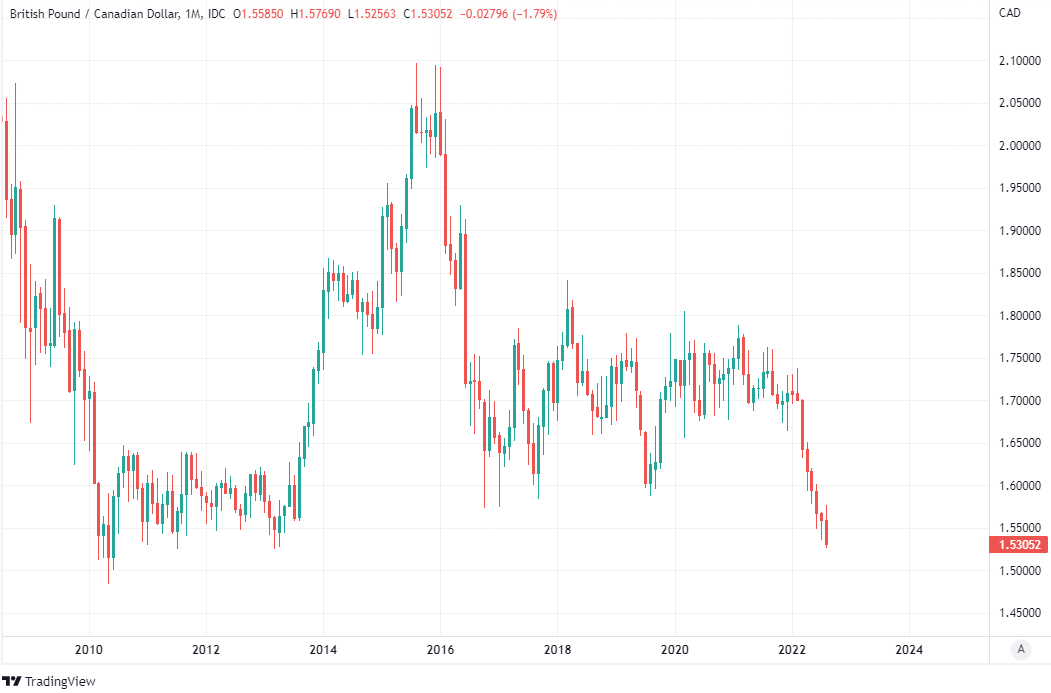 Canada’s Dollar has also benefited this year from a hawkish Bank of Canada (BoC) monetary policy and close proximity to the U.S, which has typically been seen as likely to outperform European economies throughout the year.

It has consistently proven more resilient than Sterling to the U.S. Dollar, which has gone from strength to strength amid a sharp upward revision in market expectations for Federal Reserve interest rates that are now widely expected to end the year somewhere above 3%.

“Markets continue to lean towards a slightly more hawkish outcome for the BoC’s Sep policy decision than the Fed’s and this situation may change a little more in the CAD’s favour tomorrow if Powell suggests the Fed could step down a gear in its tightening moves,” says Shaun Osborne, chief FX strategist at Scotiabank, writing in a Thursday commentary.

The ongoing trouble for Sterling is that the Loonie makes a more compelling offering on almost all fronts, which may be why GBP/CAD has struggled to avoid giving up ever further ground this year almost irrespective of broader global market conditions. 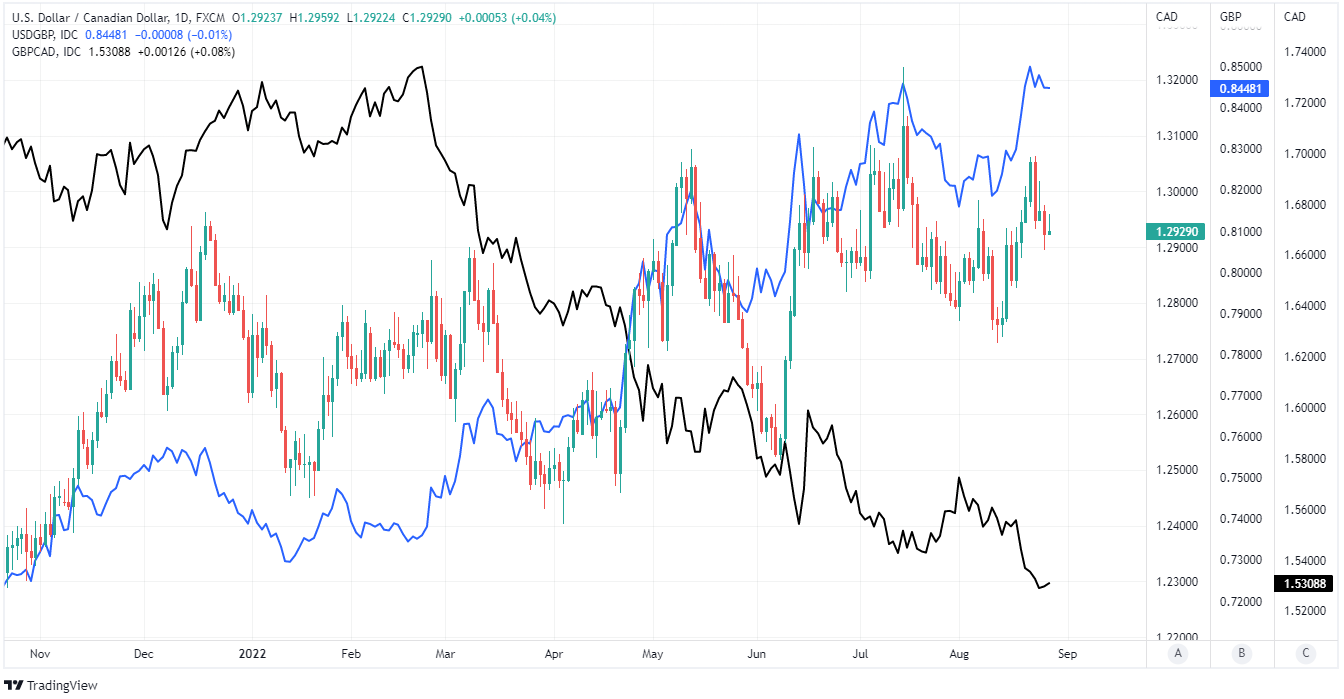 Above: USD/CAD shown at daily intervals alongside USD/GBP and GBP/CAD.

The Pound to Canadian Dollar rate could fall as far as 1.50 up ahead if some analysts are right about the main Sterling exchange rate, GBP/USD, being at risk of falling to 1.15 or below.

But Sterling’s tendency toward underperformance regardless of market conditions means there’s a risk that GBP/CAD could also fall to same extent even if the U.S. Dollar's rally stalls and GBP/USD stabilises up ahead.

Much would depend in those circumstances on the extent of any correction lower in USD/CAD, which could weigh on GBP/CAD given that the latter tends to closely reflect the relative performance of Sterling and the Loonie when each is measured against the U.S. Dollar.

“While price action has retraced from the highs, spot levels have yet to close below the 1.2950 mark on the dailies. That’s the key level to watch in terms of near-term directionality in our view,” says Bipan Rai, North American head of FX strategy at CIBC Capital Markets.

“The key factors remain external in nature – broad USD moves, oil prices and risk. Our view on those factors suggest that the path of least resistance is still for USD/CAD topside,” Rai wrote in a Friday market commentary.