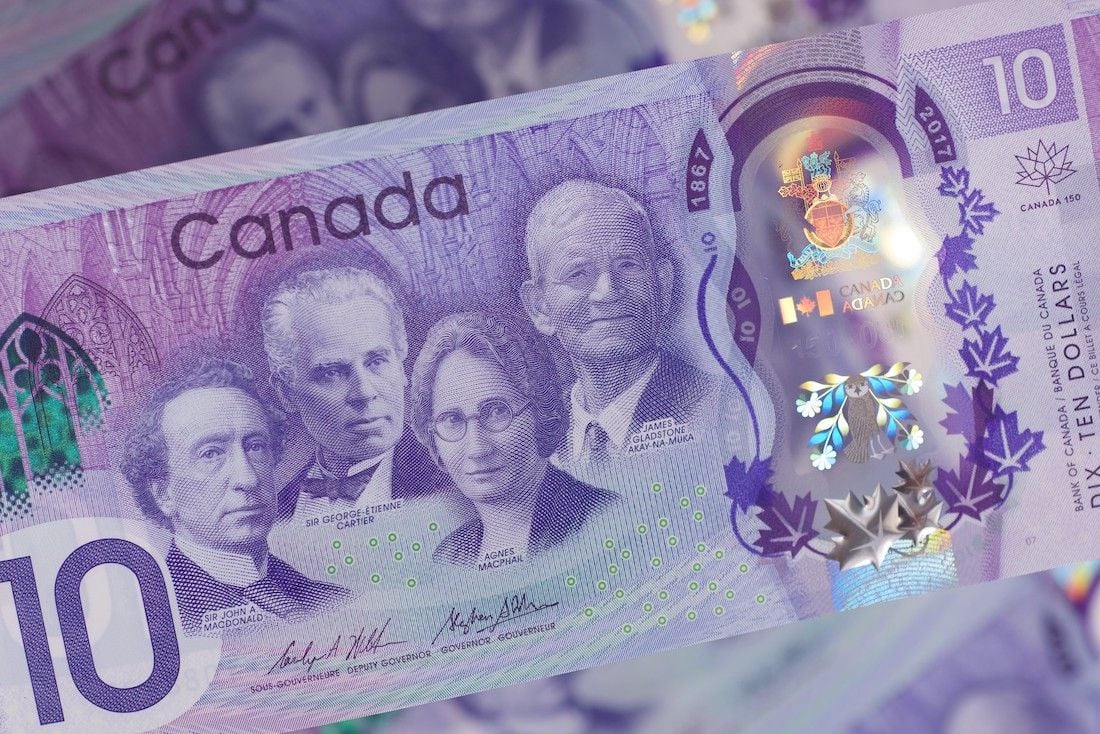 The Pound to Canadian Dollar exchange rate extended its nascent breakout over and above a stubborn resistance level on the charts to open the new week and could now have scope to trade up to 1.7390 or more over the coming days.

Sterling had struggled to decisively erode a stubborn layer of technical resistance around 1.7236 on the charts until last Wednesday when it rose sharply against the Canadian Dollar in a rally that continued through until Monday.

The Pound to Canadian Dollar rate placed itself on course for a fourth consecutive gain when lifting further above the recently-recovered 1.73 handle to open the new week and could be likely to hold sustainably above that level in the short-term.

Robust appetite for the Pound, a lethargic performance from the Canadian Dollar and frequent bouts of market concern over developments along the Russian border with Ukraine have all contributed and could each help to sustain the ongoing upturn. 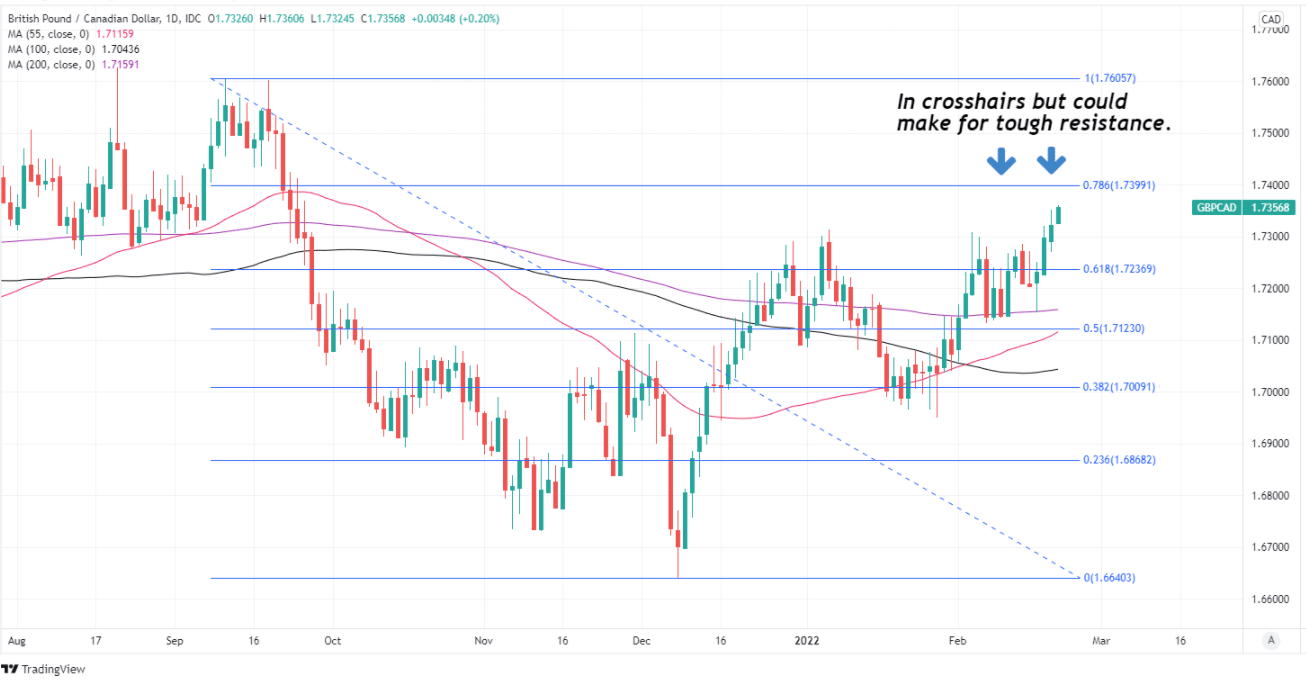 Above: GBP/CAD shown at daily intervals with Fibonacci retracements of September 2021 decline indicating possible areas of technical resistance for Sterling.

Global markets were lifted to open the new week after French diplomacy led the White House to announce on Sunday that Presidents Joe Biden and Vladimir Putin would likely meet in person in the near future, raising hopes of de-escalation in relation to Ukraine.

“Still, given the very unstable situation in the Donbas area and no guarantee that diplomatic efforts will be able to de-escalate tensions just yet, we continue to see a good deal of downside risk,” says Chris Turner, global head of markets and regional head of research for UK & CEE at ING.

“There is indeed a risk that the situation will morph into a longer diplomatic game that could prevent markets from fully pricing out geopolitical risk for a while,” Turner and colleagues said in a Monday research note.

Although sentiment was lifted on Monday by the prospect of diplomacy providing a peaceful solution to a mounting risk of conflict along the Russian border with Ukraine, sentiment can turn quickly and the possible meeting between U.S. and Russian presidents is not necessarily a game-changer.

This is because the Russian border with Ukraine is largely a proxy venue through which a bigger problem is in play, one that has been in the pipeline since at least April last year and which has Moscow’s grievances with NATO at the heart of it.

In short, Russia’s government has made “demands” for what it describes as “security guarantees” and has warned since December that it could take unspecified military “measures” if these demands go unmet, while the U.S. and NATO have since rejected its core proposals.

“Asked directly what these measures might be, [the President of Russia] said: they could come in all shapes and sizes. He will make decisions based on the proposals submitted by our military. Naturally, other departments will also take part in drafting these proposals,” Russia’s Foreign Minister Sergey Lavrov said in a January 28 interview with Sputnik, Echo of Moscow, Govorit Moskva and Komsomolskaya Pravda radio stations.

While the risks in Ukraine are real, the market has largely overlooked the parallel and very much connected bid by Moscow for the “de-facto dissolution of NATO,” and it’s this latter gambit (as well as its rejection) that could ensure tensions and associated risks remain elevated for a while yet.

“With no domestic data ahead for the CAD, external developments (US data, Fed speakers) and the risk backdrop (stocks, Ukraine) will drive CAD movement,” says Shaun Osborne, chief FX strategist at Scotiabank.

“Our models highlight slightly more upside than downside risk for USDCAD over the coming week via the weak ahead range estimate but we highlight that all things considered, our fair value model suggests the CAD is very close to equilibrium right now,” Osborne and colleagues said on Friday.

The prospect of further and ongoing tensions is an upside risk for the influential USD/CAD pair and in turn, for the Pound to Canadian Dollar rate, which tends to closely reflect the relative performance of Sterling and the Loonie when measured against the U.S. Dollar.

But Sterling and GBP/CAD have also been supported in recent trading by a string of upside surprises in official economic figures including retail sales, inflation, employment and GDP data that have all cast the UK economy in a resilient light for the December and January periods.

This has seen the market continue to anticipate another interest rate rise from the Bank of England (BoE) at next month’s policy meeting and several more soon after, helping to lift the Pound against major counterparts along the way.

“CPI did not overshoot as much as some feared, the earnings data ex-bonus was not as strong (especially in the midst of “bonus season”), and the bounce in retail sales, while more than expected, was less than half of December’s decline. And those are important as in our view it lowers the probability of a 50bp hike at the March 17 meeting,” cautions John Briggs, global head of desk strategy at Natwest Markets.

All of this helps to explain why the Pound to Canadian Dollar rate and Sterling more broadly are likely to be sensitive this Wednesday to parliamentary testimonies from BoE Governor Andrew Bailey and colleagues who’re set to appear before the House of Commons’ Treasury Select Committee.

The hearing is the highlight of the week for GBP/CAD and more so with the Canadian calendar sitting devoid of major appointments for the Loonie.