The Canadian Dollar ceded ground to Sterling after January’s Bank of Canada and Federal Reserve (Fed) policy decisions appeared to turn the currency market tide in favour of a higher USD/CAD rate, which would be a potentially supportive development for GBP/CAD in the weeks ahead.

Canada’s Dollar slipped back toward the 0.78 handle against the greenback as USD/CAD lifted to 1.28 on Friday in what was also favourable price action for GBP/CAD, which built further on Thursday’s recovery of the 1.71 handle during the final session of the week.

That would likely have marked a short or medium-term turning point for the Pound to Canadian Dollar rate if strategists at TD Securities, CIBC Capital Markets and Spectra Markets are right to perceive this week’s turn higher in USD/CAD as indicative of the outlook for it over the coming weeks.

“We have taken profit on our GBPCAD short in light of the Fed's blazingly hawkish stance compared to a confusing hawkish hold by the BOC. The latter suggests that the BOC has lost its status as a leading hawk and risks pricing out the 6 hikes this year,” says Mazen Issa, a senior FX strategist at TD Securities. “For now, we think CAD rallies should be used as an opportunity to unwind longs as more deference gets paid to external factors.”

U.S. Dollar gains provided a tailwind to an already-rising USD/CAD following this Wednesday’s Federal Reserve policy announcement but it was the Bank of Canada’s prior decision to pass on January’s opportunity to begin lifting its cash rate from the current 0.25% that catalysed the move. 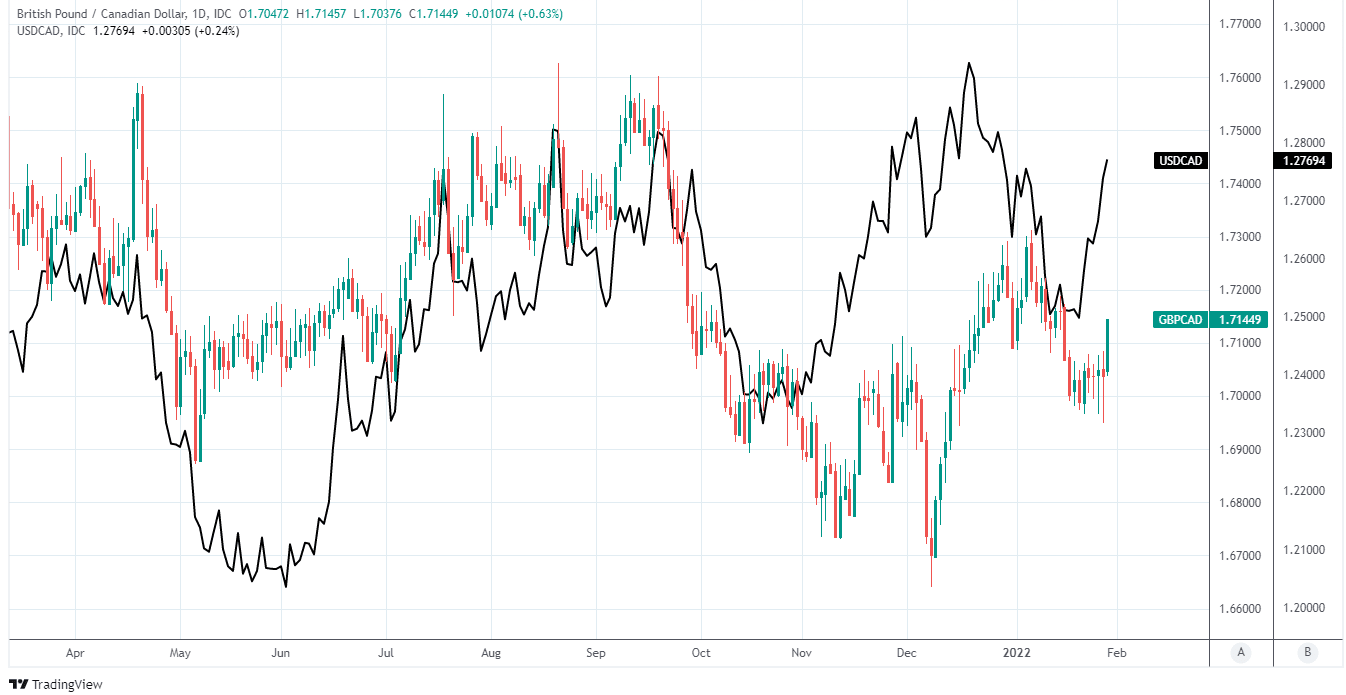 Above: GBP/CAD shown at daily intervals with USD/CAD.

Economists mostly expected the BoC to leave its interest rate on hold this week but pricing in interest rate markets had suggested a notable contingent of investors were betting that a surprise increase would be announced, likely explaining the subsequent rallies in USD/CAD and GBP/CAD.

“The Bank also seemed to indicate that it prefers to be slow to start and adopt a more measured pace of hikes despite the threat of inflation. That suggests the OIS curve has scope to unwind extra tightening. In light of a more blazingly hawkish Fed, which has tacitly endorsed more aggressive pricing this year, we prefer to take profit on our CAD long exposure, even though GBP continues to screen poorly on our dashboard,” TD’s Issa says.

The BoC said on Wednesday that its crisis-inspired pledge to keep interest rates near zero for the foreseeable future was ending, citing increased inflation, an economy that grew faster than expected last quarter and a labour market that has more-than recouped its pandemic-induced job losses.

“The Bank now sees the economy operating close to potential now as opposed to the middle quarters of this year (as per the October MPR). That necessitated an upward revision to inflation forecasts for 2022,” says Bipan Rai, North American head of FX strategy at CIBC Capital Markets.

“Macklem was very clear that he’s concerned about domestic sources of inflation (tightness in labour market, rising house prices, capacity pressures), and how they could offset any reversal of goods price inflation as supply chain issues ease in the quarters ahead,” Rai also said on Thursday.

Economic “slack” and “spare capacity” connected to pandemic-related job losses was previously flagged by the BoC as likely to undermine Canadian inflation pressures, thus preventing a sustainable attainment of the two percent target over the medium-term, and this is why eliminating that slack was always a precondition for an eventual decision to return the cash rate to more typical levels

With these objectives met the BoC has made clear to Canadian businesses and households in advance that interest rates are now likely to rise going forward, although the rub for the Canadian Dollar currently is that financial markets had gotten somewhat ahead of themselves by anticipating that policy normalisation would come sooner and faster than it has done so far.

“We’re really trying to cut through the noise so that monetary policy is more of a source of confidence and is not another source of uncertainty,” BoC Governor Tiff Macklem explained when asked on Wednesday why the BoC hadn’t raised rates in its January policy decision. 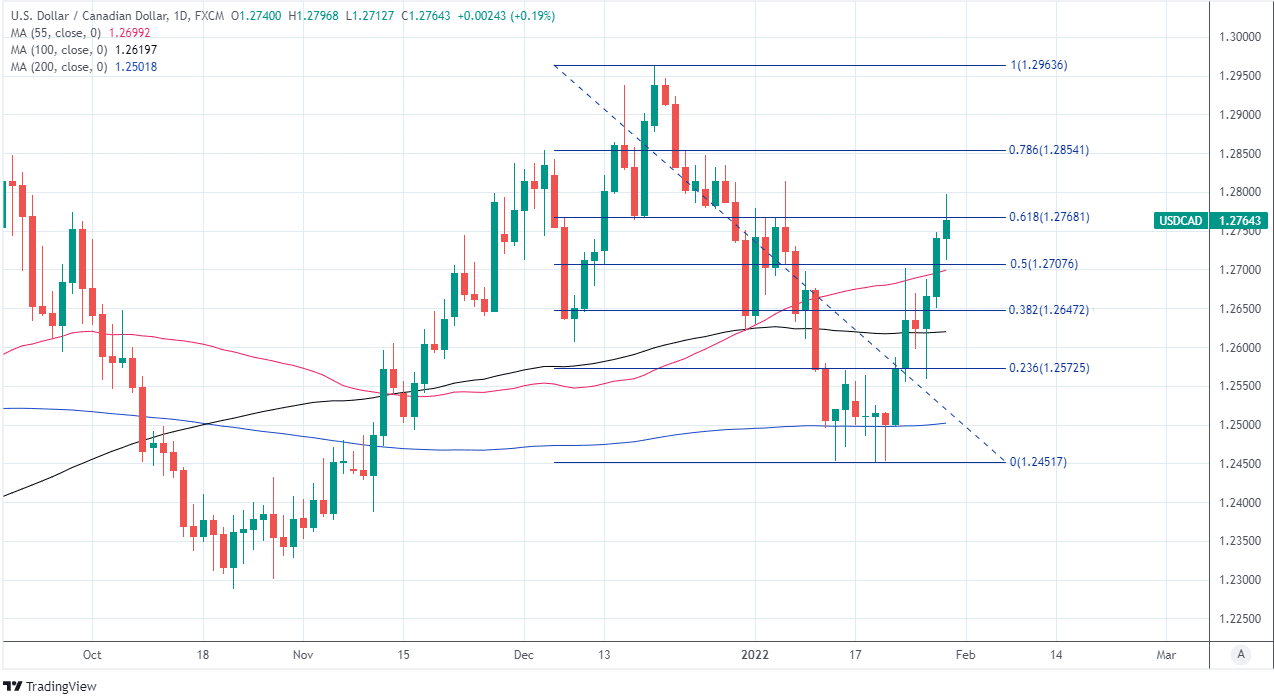 January’s decision to leave the cash rate on hold was followed by declines in Canadian Dollar exchange rates that were indicative of profit-taking by speculative traders, although this week’s climb in USD/CAD was further buttressed by Wednesday’s Federal Reserve policy decision.

“The Fed opened the door for more rate hikes and the BoC slammed the January door shut,” says Brent Donnelly, president at Spectra Markets and a veteran currency trader. “This Ottawa/DC monetary policy divergence has turned the tide in USDCAD for now.”

Fed Chairman Jerome Powell indicated strongly in this week’s Federal Open Market Committee press conference that U.S. interest rates could begin to rise in March, with further increases following thereafter in what is likely to be a faster monetary policy tightening cycle than that seen between December 2015 and December 2018 when the Fed raised its interest rate from 0.25% to 2.5%.

This put further wind into the sails of a northbound USD/CAD and also rejuvenated a previously-flagging rally in U.S. Dollar exchange rates more broadly, both of which have been bullish developments for GBP/CAD.

GBP/CAD tends to closely reflect the relative performance of USD/CAD and GBP/USD, but in a way that often sees it rising and falling alongside the USD/CAD rate.