The Pound to Canadian Dollar exchange rate has shown signs of stabilising above 1.69 and could be set to attempt a recovery of 1.72 this week if the Bank of Canada (BoC) gives an overbearing interest rate market the cold shoulder, which could lift GBP/CAD by upending the Loonie.

Sterling was close to 1.70 against the Canadian Dollar on Monday after sustaining its earlier rebound from beneath 1.69 throughout last week, aided in the latter half by a USD/CAD exchange rate that rallied back from a brief foray beneath 1.23 during the latter half.

GBP/CAD has been flagged as likely to draw dip buyers in any event that fresh losses push it back to 1.69, and could have scope to recover further lost ground this week if some analysts are right about the possible implications for USD/CAD from Wednesday’s BoC decision.

This is widely expected to include plans for reducing the BoC’s Canadian government bond purchases to C$1BN per week, although market attention is likely to be focused most keenly on the Bank’s remarks about the outlook for inflation and its interest rate guidance.

Of particular importance is the BoC’s judgment of the likely point when “economic slack is absorbed so that the 2 percent inflation target is sustainably achieved,” as it has pledged so far to keep the cash rate on hold at 0.25% until then.

“We like USDCAD higher ahead of the upcoming BoC meeting. While the stagflation theme has oddly benefited CAD, in light of higher terms of trade and stronger equities, it's likely moved too far, too fast yet again. It's trading at a plus 1-sigma premium on our dashboard, while also holding the title of the most overbought currency in the G10,” writes Mark McCormick, global head of FX strategy at TD Securities. 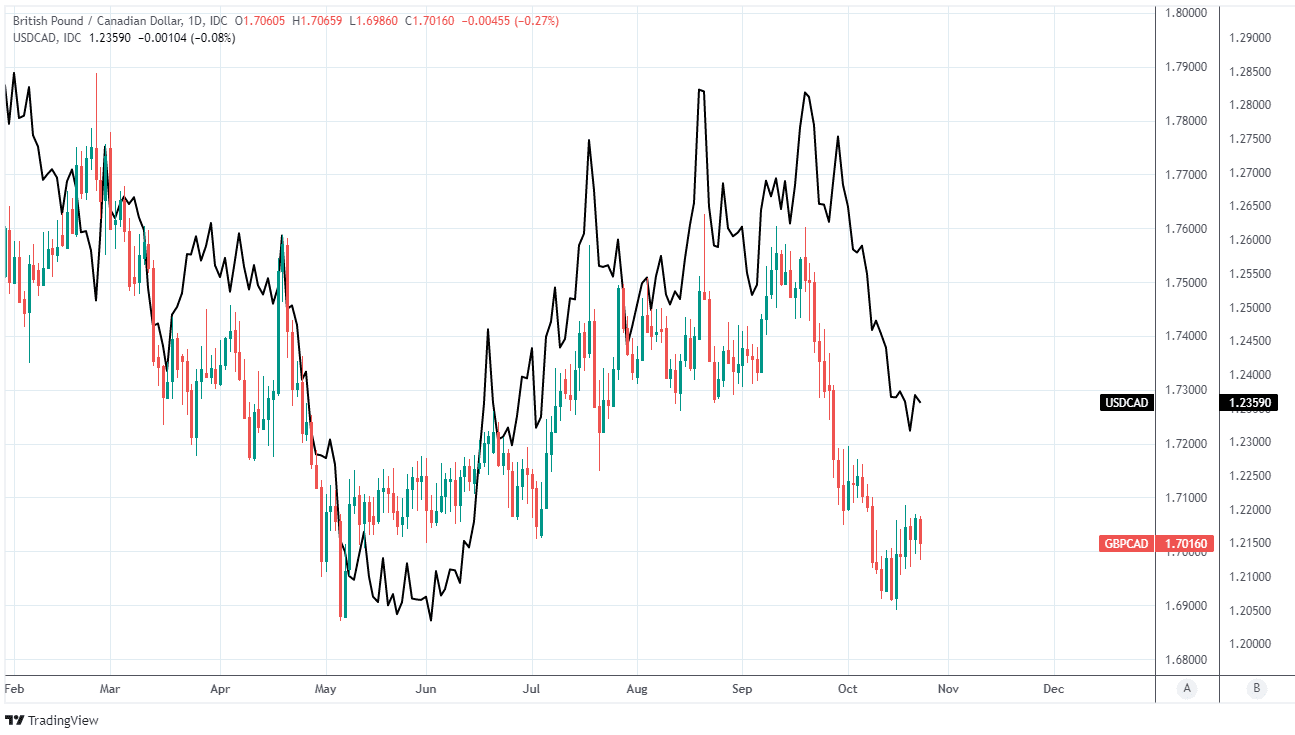 Above: Pound-to-Canadian Dollar rate shown at daily intervals with USD/CAD.

“We would look for better selling levels ahead of the 1.2850 pivot point,” McCormick wrote in a research briefing last Friday that Wednesday’s decision could act as a catalyst for USD/CAD to rise toward the 1.26 level implied as “fair value” by commodity prices

If seen this kind of move in USD/CAD would lift the Pound-to-Canadian Dollar rate above 1.73 without intervening declines by the main Sterling exchange rate GBP/USD from Monday’s 1.3750 level, because GBP/CAD always closely reflects the relative performance of USD/CAD and GBP/USD.

The BoC’s judgement on “economic slack” and inflation outlook are key because in absence of overt comment it’s through these areas the Bank would pour cold water over recent market expectations for the cash rate to rise as far as 0.75% by June 2022.

The decision is a risk for the Loonie because pricing in the overnight index swap market suggests investors see a high probability of the BoC lifting its cash rate early next year, which is in conflict with the bank’s guidance and some recent Canadian economic developments.

“Governor Macklem should think long and hard about any move to break his word about not raising the policy rate before the output gap is closed. Markets seem to be predicting he’ll do just that,” says Avery Shenfeld, chief economist at CIBC Capital Markets.

“Indeed, odds are that the timetable for closing the output gap has gotten a shade longer, rather than moved forward. Remember that real GDP in the last two quarters has run about 3% slower at annual rates than the last Bank of Canada projection,” Shenfeld wrote in a Friday research briefing.

This could mean the BoC is left little choice but to revise further out into the future on Wednesday the date at which it expects the economy to be fully recovered from the damage done by attempts at containing the coronavirus.

“Caution ahead of the policy decision may curb CAD gains in the near-term. No push back from the governor next week would be bullish for the CAD and perhaps drive incrementally more conviction about earlier rate hikes, however,” says Shaun Osborne, chief FX strategist at Scotiabank.

"We expect firm resistance around the 1.24 point (initial Fibonacci retracement of the 1.2775/1.2288 drop). A push above 1.24 would target 1.2490/00, however—where our range estimator suggests USD gains are likely to peak next week,” Osborne and colleagues wrote in a Friday research note. 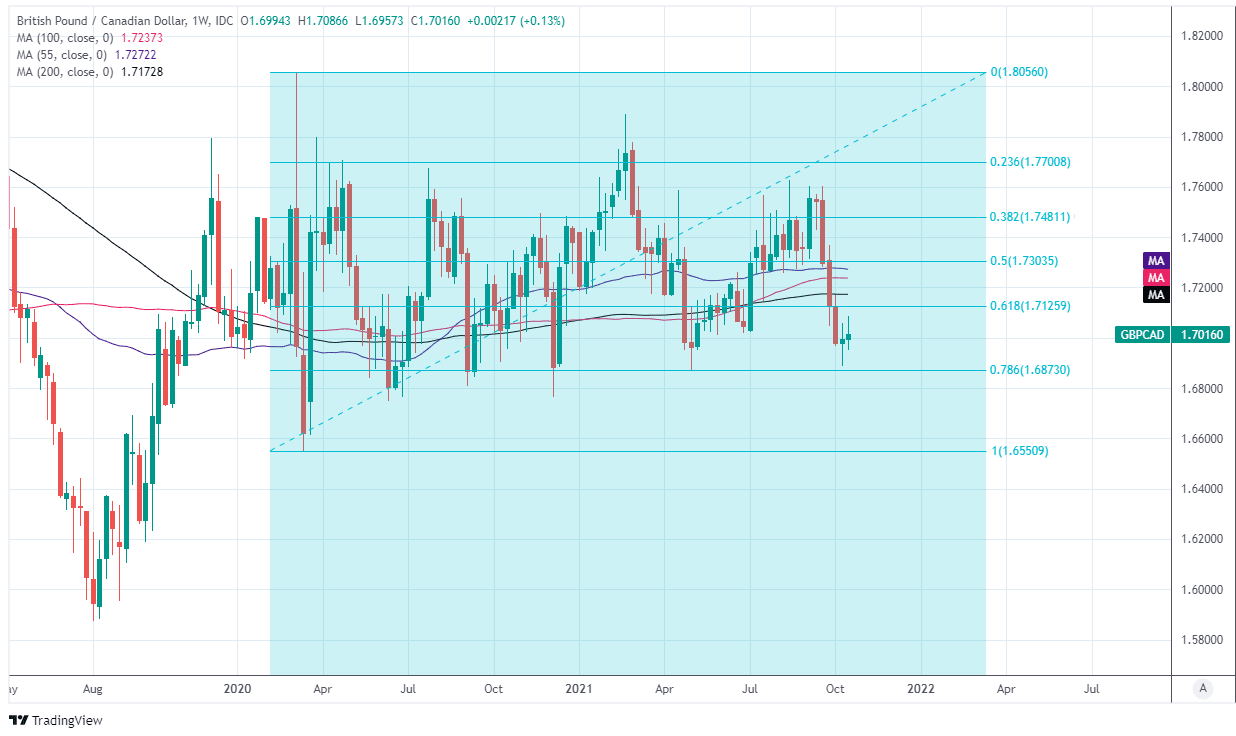 The Pound-to-Canadian Dollar rate’s tentative recovery would likely extend near to the 1.72 handle this week if USD/CAD makes it back to 1.25 or above, although this would likely require the BoC to disappoint the market on Wednesday.

“BoC pushback on the near-term inflation saga could be a short-term catalyst, especially as the market looks for immediate BoE-style action. For those not watching, the market now expects a BoE rate hike next month. We won't see that decisive action from the BoC this year,” TD’s McCormick said.

Financial markets have increasingly come to assume that abnormally high global inflation pressures are likely to see the BoC lifting its interest rate in the early months of 2022, although the Bank’s guidance makes clear that a rate rise is unlikely before the second half of the year.

Furthermore, Governor Tiff Macklem indicated when addressing the Council on Foreign Relations on October 07 that he remains of the view that inflation pressures will subside in the near future without meriting an interest rate response

Should the BoC stick to that position on Wednesday it could compel the market to second guess its assumptions about the BoC cash rate, with possibly supportive implications for the Pound-to-Canadian Dollar rate.

“The rally in CAD is looking quite tired, and we expect to see more support in USD/CAD around the 1.2300 level. Most of the positives (BoC tightening, solid economic recovery, higher energy prices) appear in the price and our short-term fair value model currently shows a 1.5% undervaluation in USD/CAD. The Bank of Canada meeting week might prove to be a catalyst for an upside correction,” says Francesco Pesole, a strategist at ING.

“With the USD correction now past us, in our view, we see the balance of risks clearly tilted to the upside for USD/CAD next week. August GDP data released two days after the BoC meeting may provide only a small help to CAD,” Pesole said on Friday.