- GBP/CAD risks losses to bottom of 2020 range amid oil recovery.

- Lockdown exit, Brexit talks in focus for GBP as oil drives the CAD.

The Pound-Canadian Dollar rate fell sharply last week as oil prices recovered by double-digit percentages and Sterling was weighed down by domestic concerns, although the the British currency is besieged by fundamental risks on all fronts and could fall falling further over the coming days.

Pound Sterling fell -1.77% against the Canadian Dollar to end the week at 1.7280 on Friday after suffering almost five back-to-back declines, with the only interuption to the run of losses coming on Thursday when the Bank of England (BoE) left its monetary policy settings unchanged. Thursday's price action gave Sterling a brief moment of stability although didn't prevent it from closing below the 55-day moving-average of prices at 1.7324 that might act as a form of restistance early in the new week.

The Pound-Canadian Dollar rate declined amid broad weakness in Sterling and amid a widespread recovery by the Loonie, which cheered a 32.5% increase in WTI crude oil futures and a strong week for stock markets. Canada's Dollar rose into the weekend despite a record job loss being revealed by Statistics Canada for April, which saw more than 2 million Canadians file for unemployment benefits and lifted the unemployment rate to 13%, although oil prices and risk appetite still lifted the Loonie.

"USD/CAD price action from yesterday was strongly indicative of a reversal and possible test of the lower end of our 1.38-1.43 range. The vol curve remains the most inverted out of the G-10 pairs that we track as the front-end remains elevated. This is likely due to uncertainty with respect to crude. The WTI-WCS spread has narrowed significantly, but this offers only a modest tailwind for now," says Bipan Rai, North American head of FX strategy at CIBC Capital Markets. 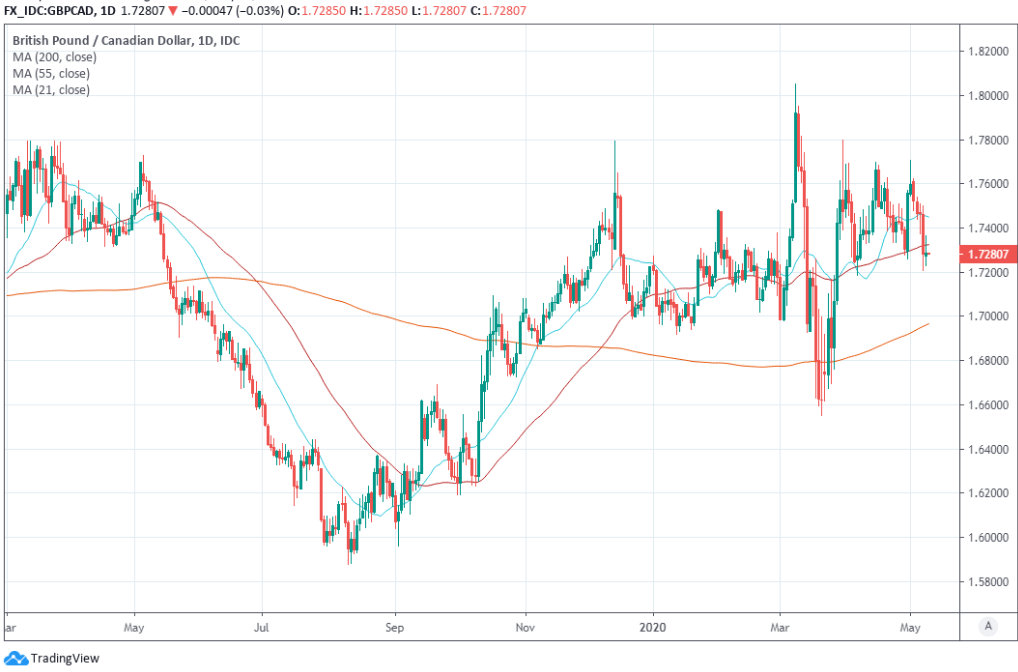 Both Sterling and the Loonie are positively correlated with risk assets like stocks but the UK unit underperformed last week due in part to fears of further BoE easing being around the corner, as well as concerns about the UK lockdown exit strategy and an absence of progress in the Brexit trade talks.

The Pound was sliding on Friday back toward the bottom end of its 2020 trading range, which has mostly spanned the gap between 1.70 and 1.80 although lower levels have been seen.

Sterling will enter the new week at 1.7280 and with investors digesting Prime Minister Boris Johnson's lockdown exit plan that was due to be unveiled Sunday night. The UK is the last developed world country to begin trying to extricate itself from lockdown and faces the prospect of seeing out the May month as the 'sick man of Europe' again, if not the world, so if markets don't get a clear roadmap toward a full lockdown exit then they might punish the Pound.

The PM is widely expected to extend the 'lockdown' into June although speculation has it that some restrictions could be eased this week, which might be welcomed by the Pound if proven correct.

"There are USD positive trends against EUR, GBP, CHF, CAD, NZD and NOK, which is offset by USD negative trends vs. JPY. USD is favored against several major G10 currencies this week. USD/CAD and USD/GBP rallies are set to continue, while the USD/JPY downturn may see a bounce as the sell-off looks oversold," says Vadim Iaralov, a quantitative strategist at BofA Global Research.

Johnson's plan comes days ahead of first quarter GDP data due at 07:00 on Wednesday, which will provide a glimpse of the likely cost for the economy of the coronavirus and the lockdown used to contain it. It also comes as sentiment toward the Pound turns negative as a result of concerns over a possible 'Australia deal' Brexit at year-end after the third round of Brexit negotiations saw the EU's Trade Commissioner Philip Hogan tell Irish media that he doubts the UK even wants to reach a Brexit trade deal. 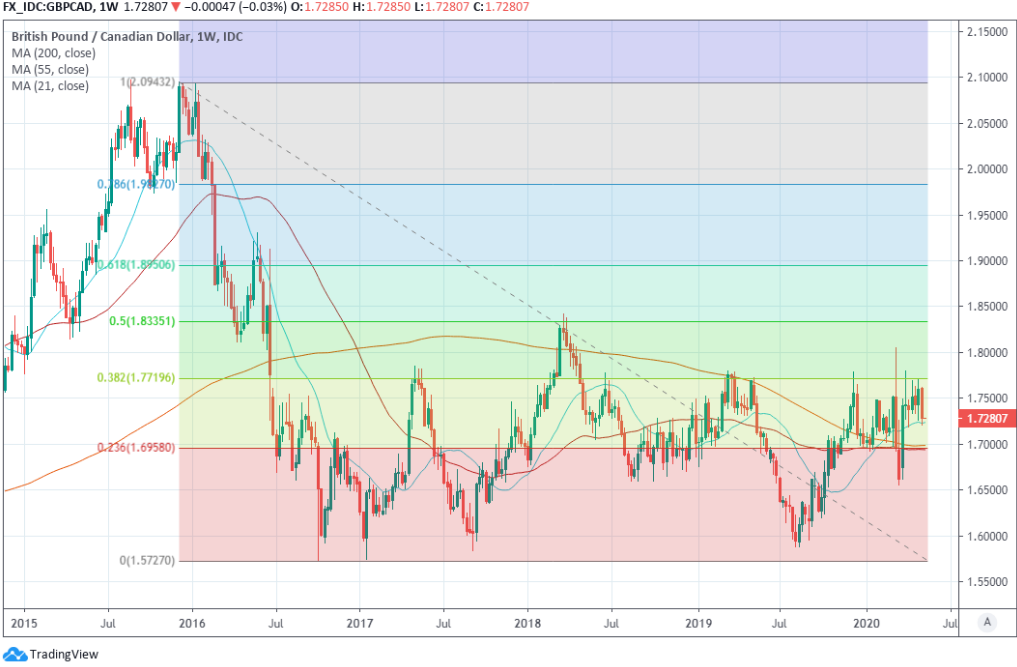 Above: Pound-Canadian Dollar rate at weekly intervals with Fibonacci retracements of post-referendum downtrend.

What matters most for the Pound-Canadian Dollar rate is relative price action in GBP/USD and CAD/USD because GBP/CAD always closely matches the sum of the former over the latter. But the rub for Sterling is that technical and fundamental analysts are warning of losses ahead for GBP/USD at the same time as the USD/CAD rate is being tipped for continued declines, which is bad news for the Pound-Canadian Dollar rate outlook.

Recovering oil prices and raucous stock markets are a boon for the Canadian Dollar and if coming at the same time as Brexit and BoE fears are weghing on Sterling then they could put the Pound-Canadian Dollar rate at risk of a return to the bottom of its 2020 range at 1.70 or below. This outcome would be even more likely if markets perceive PM Johsons lockdown exit plan to be too slow in reopening the economy and if Thursday's summary of the Brexit talks highlights another week of "limited progress."

Some Canadian provinces including Qubec and Ontario are already in the process of exiting their own lockdowns, and likewise with the U.S. and many European economies, which leaves Sterling looking like the odd one out. That offers the Canadian economy scope to begin recovering sooner than its UK counterpart at a time when the Loonie was already being bolstered by recovering oil prices.

"Data may only start to matter again once lockdown measures are eased and investors can start to handicap net winners or losers in the rebound," says Shaun Osborne, chief FX strategist at Scotiabank. "A combination of further equity gains (the DJIA is still down some 16% on the year while the S&P 500 is down around 11%) and crude steadying in the $25/30 range should help pull the CAD a little higher in the short to medium term. However, we still think the CAD will struggle to make a sustained rebound against the USD until later this year." 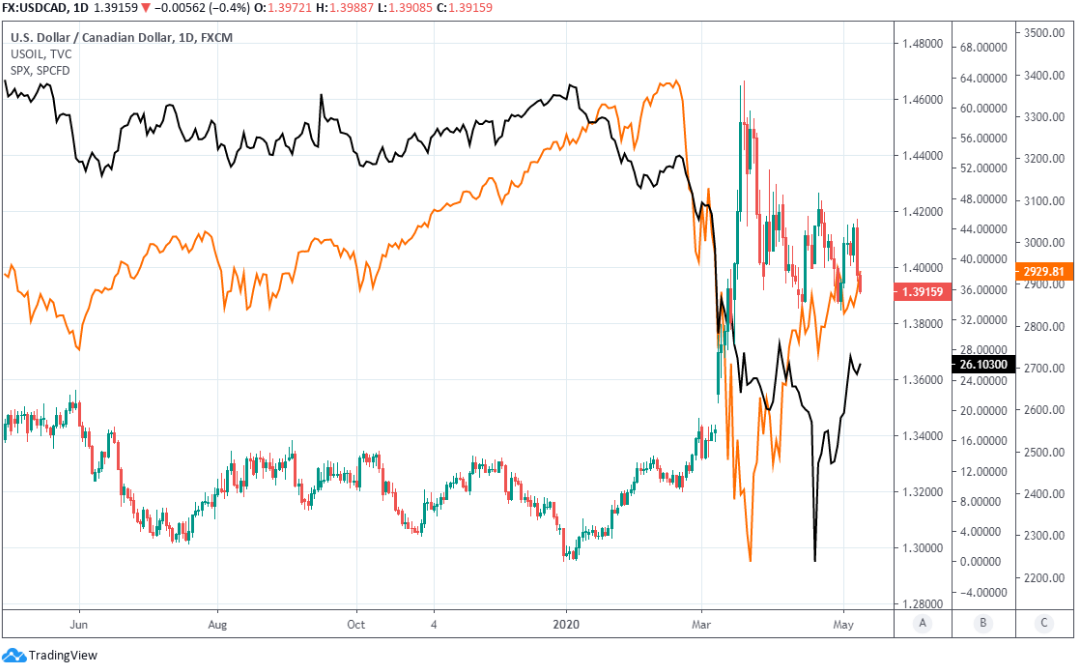