- CAD retains 1st place in G10 and is set for more gains.

- But next week's BoC speech, CPI data, are risks to CAD.

The Canadian Dollar remains the best performing currency in the developed world universe this year and is now likely to spend the coming months trading within a new, higher range against its U.S rival and other currencies, according to analysts at Credit Suisse.

Canada's Dollar received a much need shot in the arm last week when the May labour market report showed the economy creating jobs at a rapid clip in the second quarter, which helped push the unemployment rate down to a new record low.

That came at the same time as Bureau of Labor Statistics data showed the U.S. economy creating a much lesser number of jobs that markets had anticipated, and during a period when investors have become much more sceptical about the merits of owning the U.S. currency.

This helped pick the Canadian Dollar up from near to a two-year low against the Dollar, driving the USD/CAD rate back decisively from the peaks seen at the end of May. It also helped send the Pound-to-Canadian-Dollar rate down to its lowest levesl since the immediate aftermath of the June 2016 EU referendum.

"The strength of Canadian activity data is a distinctive trait within G10, and continues to be a driving factor for monetary policy expectations," says Alverise Marino at Credit Suisse. "1-year forward 1-month OIS rates rebounded sharply over the past week in USD and in CAD (to a lesser extent in GBP), reinforcing the already significant rate advantage versus the rest of G10 currencies." 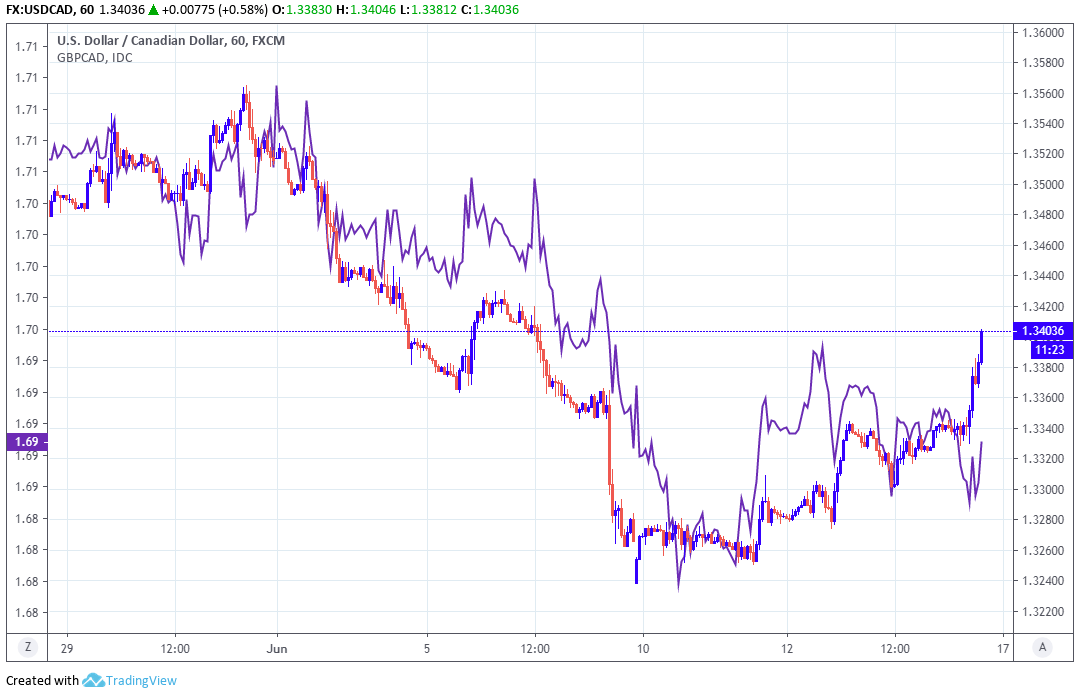 Up until last Friday's labour market data was released financial markets had been betting that central banks on both sides of the U.S.-Canada border would be cutting their interest rates before year-end.

Since then bets against the Federal Reserve (Fed) have remained weighty but wagers against the Bank of Canada (BoC) have lessened substantially due to the superior economic performance as well as a range of other factors. This has supported continued Canadian Dollar gains.

"The Canadian dollar has been one of the key beneficiaries of Fed easing expectations and of de-escalation of US-Mexico trade tension," Marino says. "Following 6 weeks of tight range trading, USDCAD finally broke below the 1.3350 barrier on 7 June, buffeted by weak US payrolls, constructive news on trade and yet another batch of strong Canadian employment data."

Marino says a June 17 speech from Bank of Canada deputy governor Lawrence Schembri and June 19 inflation report pose a risk to the Loonie's position at the top of the G10 league table because they could call into the question the market's view that Canadian interest rates will remain unchanged this year rather than being cut.

However, so long as next week's events pass without undermining the BoC outlook, Canada's currency might then cement itself within a new and higher trading range that could endure for a few weeks yet.

"As long as these events do not give markets a strong reason to doubt the consensus call for a stable BoC policy, we suspect that a “glass half full” set of expectations ahead of the 28-29 June US-China summit can keep USDCAD under pressure in the very near-term, with the 1.3150-1.3170 area likely acting as short-term target," Marion writes, in a note to clients. 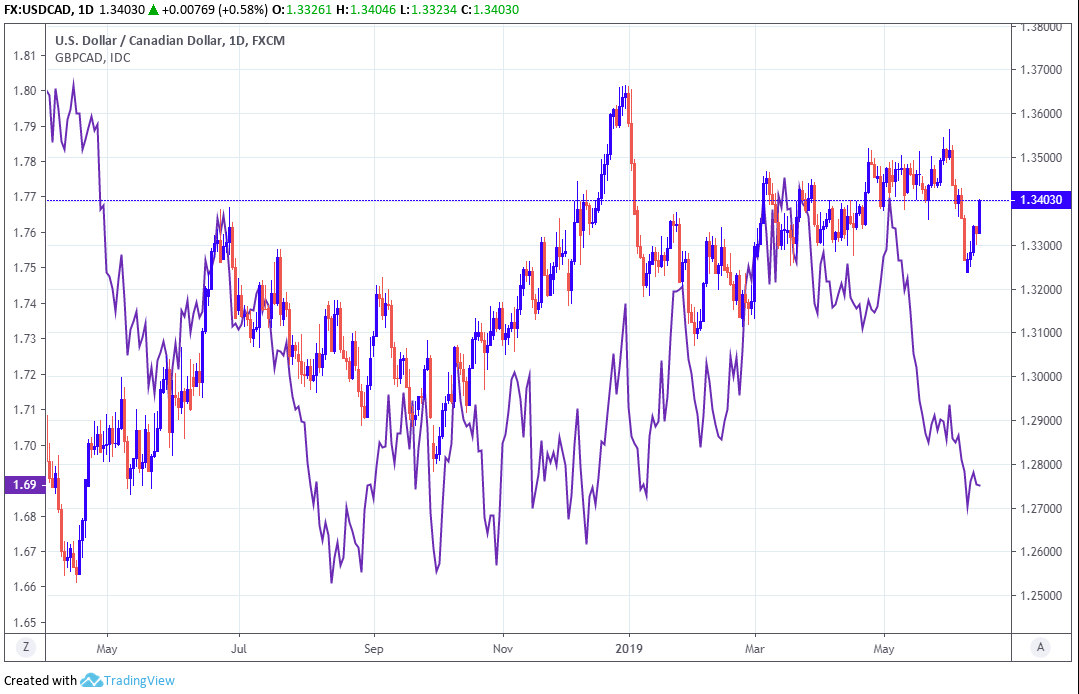 The Bank of Canada has shifted into 'neutral mode' over recent months and now says interest rates could go either up or down in the next change, after having lifted the cash rate five times, taking it up to 1.75%, since the middle of 2017. That came amid an escalation of the U.S.-China trade war, which has hurt business confidence the world over and is threatening the global economy.

The Federal Reserve has embarked upon a similar policy pivot and other central banks, which never raised their interest rates last year, are now either cutting rates to new lows or are seen as being on the verge of doing so.

"Beyond these levels, however, for further CAD gains to materialize, we suspect that a more substantial change in macro conditions would likely need to take place, e.g. the Fed unexpectedly cutting rates on 19 June, which does not feature in our current baseline scenario. The possibility of a more aggressive BoC response to CAD strength would also become a more front and centre view, under such circumstances," says Marino.

"Our previous view was that USDCAD would top out around 1.3500, with 1.3350 as the bottom of a temporary range: having broken below said range in a brand new world of much lower US yields, we now opt to target a new lower range in USDCAD, with 1.3350 now acting as the key barrier on the topside and 1.3150 on the bottom," Marino concludes.

A new lower range for the USD/CAD rate will keep the Pound-to-Canadian-Dollar rate depressed close to its newfound lows unless Sterling is also able to win back ground previously lost to the U.S. Dollar. Forecasts from the Toronto-headquartered Scotiabank suggest this is unlikely.