- More downside expected in days and weeks ahead

- Pound to be impacted by leadership race; Canadian Dollar by housing data

The GBP/CAD exchange rate is trading at 1.6888 at the start of the new week, after falling over a percentage point in the previous week. Studies of the charts suggest that the exchange rate is set to continue declining over the next five days.

The 4 hour-chart shows the pair in strong downtrend which now looks all the more bearish following the break below the major multi-year trendline. This is normally a very negative sign suggesting a longer-term change of trend. 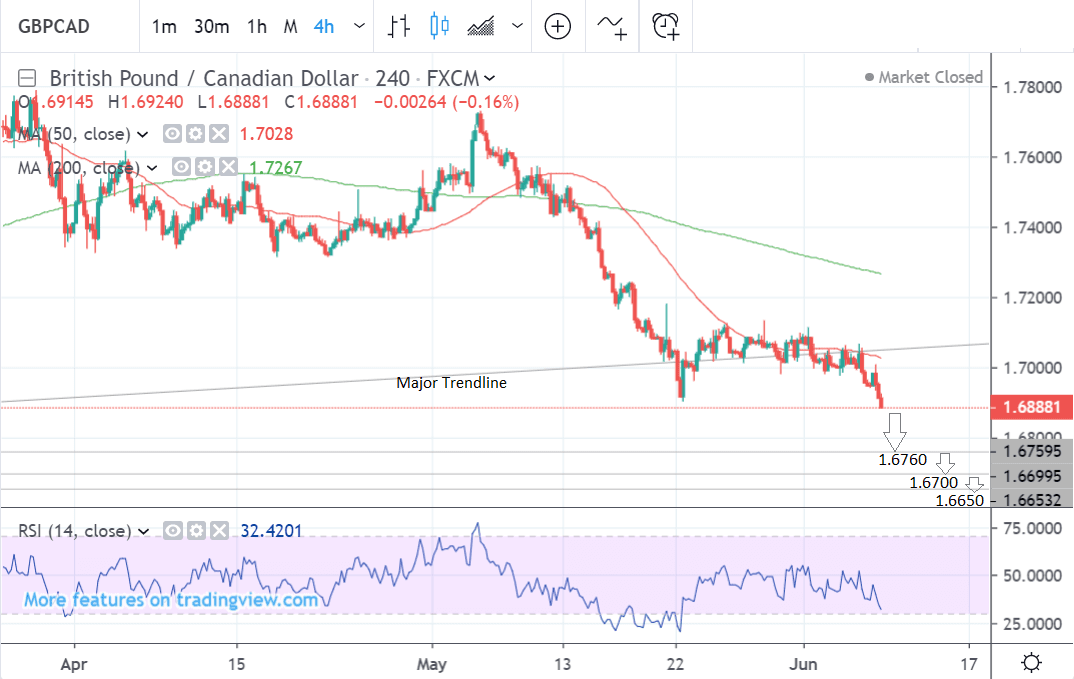 Given the old adage that “the trend is your friend” this bear is likely to continue and we see a probable move down to the next bearish target at 1.6760 in the days ahead, possibly even lower given the speed of declines so far, with 1.6700 and 1.6650 also potentially in the firing line in the week ahead.

The daily chart is just as bearish and shows more clearly the significance of the recent trendline break. 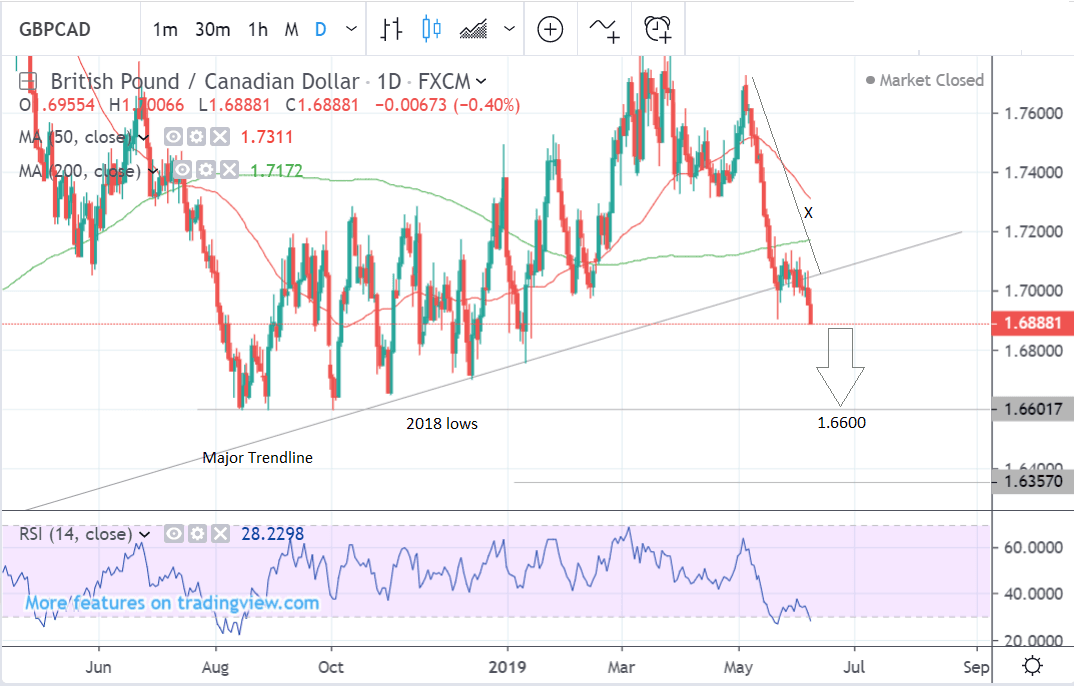 As a rule of thumb, when prices break below a trendline the follow-through lower is usually the same length as the move immediately prior to break (X) or 61.8% of the length of ‘X’.

This suggests the pair has quite a long way to fall, and we expect a move down to medium-term target of 1.6610, at the 2018 lows over the next month.

The one ‘fly in the ointment’ to the outright bearish case, is the RSI momentum indicator which is in oversold territory, defined as below 30.

This suggests increased risks that the pair may plateau because it is so oversold, however, it is not necessarily a sign of the end of a trend. RSI can remain oversold for long periods during downtrending markets.

The pair can still go lower, but it may take pauses on the way down. At the moment RSI is at 28 which is only just oversold so we are not concerned, however, if it drops below 20 then it may be a sign the pair is about to correct.

We use the daily chart to determine the medium-term outlook, which is between about 1-4 weeks in the future.

The weekly chart shows the long-term trend is bearish, and the pair is likely to simply continue declining. If it manages to pierce the 2018 lows the next target - the 100% extrapolation of ‘X’ is at around 1.6360. 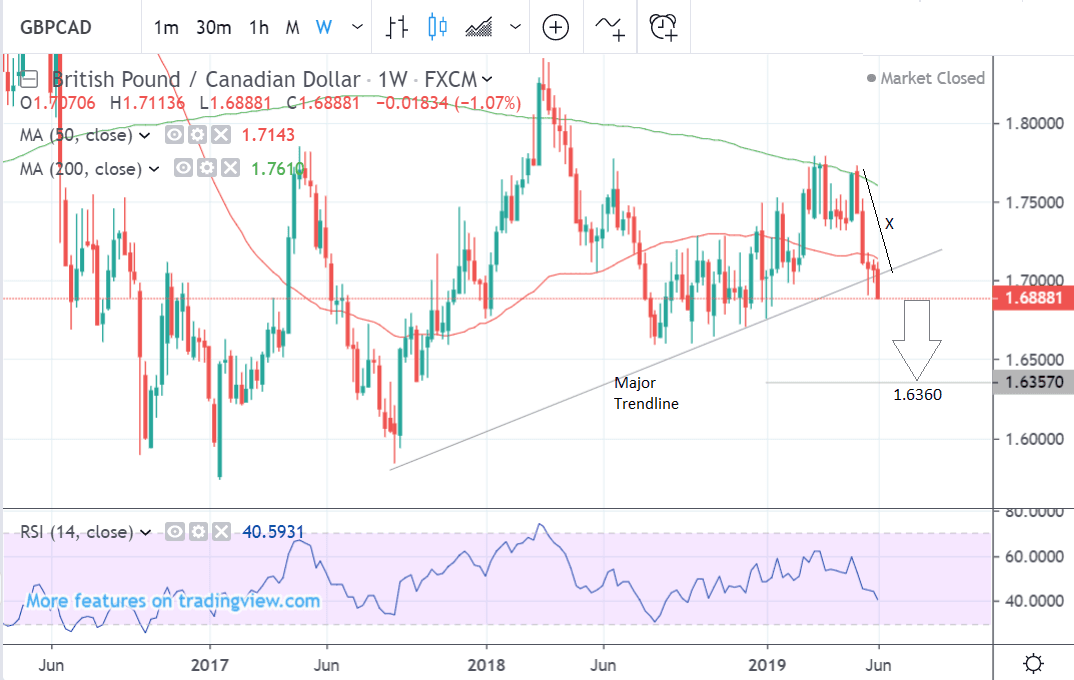 The most important release for the Canadian Dollar are housing starts and building permits for Toronto (nationwide figures to follow a week later) nevertheless, these are usually a leading indicator of what the broader data will show.

Housing is also one indicator of growth, and so could either support the current quite positive outlook or sow seeds of doubt.

Recent employment and trade data, especially, have been upbeat as can be seen in the charts below, and this has supported the currency. 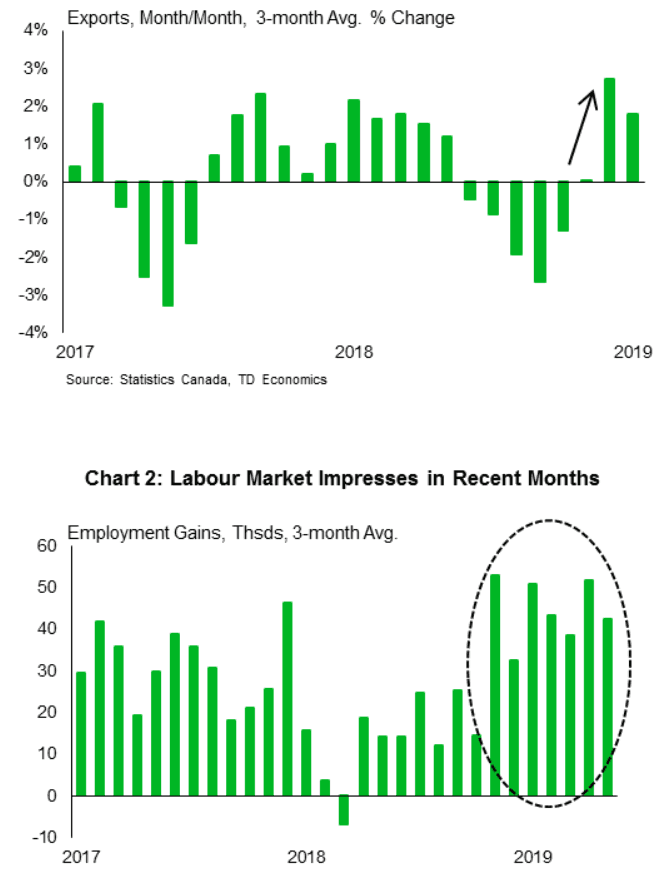 Because of the positive outlook, the Bank of Canada (BOC) is one of the few central banks not expected to cut interest rates in the year ahead, and this explains its idiosyncratic performance. Higher relative interest rates are positive for currencies because they attract more foreign capital inflows.

Property market data could thus either solidify optimistic BOC expectations or not.

“Reports from Toronto and Vancouver real estate boards suggest that the national housing market will likely continue to firm in May,” says TD Securities a Toronto-based investment bank, in a note on the data.

The economic backdrop is positive in Canada.

“All in all, recent data points suggest that economic backdrop is indeed improving, in line with the Bank of Canada view. After two-quarters of sub-0.5% prints, we expect real GDP growth will average closer to 2% over the rest of the year,” says TD Securities.

The BOC’s official stance on monetary policy is neutral with an upside bias.

“While the outlook is laden with significant risks, the Bank of Canada believes that “the degree of accommodation [provided at present] remains appropriate”. Thus, even as the market expectations intensify for the U.S. Federal Reserve to cut policy rate this year, with similar, if less intense moves seen here as well, we expect the Bank of Canada to stay pat,” says TD Securities.