- As BoC marches on and politicians address competitiveness problem.

- GBPCAD rate forecast to fall in the first-quarter and rise thereafter.

The Canadian Dollar will strengthen against the U.S. Dollar and Pound early next year, according to the latest forecasts from Toronto-headquartered BMO Capital Markets.

Canadian Dollar strength will come as the Bank of Canada (BoC) continues to lift its interest rate and a looming general election forces politicians to address the nation's increasingly apparent competitiveness problem.

BMO's call comes at the tail end of a year where the Loonie has been hammered, first by fears over the trading relationship with the U.S., then by a bust in the oil market and more recently, mixed messages from the BoC.

The USD/CAD rate has risen by 7.1%, imposing losses of more than 6% on the Loonie, although the Pound-to-Canadian-Dollar rate has held steady dur to weakness that has been unique to Sterling. Both exchange rates are now set to decline during the first quarter of 2019.

"We don’t see anything that would change the story in the first couple of quarters of the year. Although the BoC has backed off on its hawkishness, we are still looking for a couple of rate hikes," says Greg Anderson, head of currency strategy at BMO Capital Markets. "So our outlook is for relative CAD strength in H1 of the year."

The Bank of Canada raised its interest rate by 25 basis points to 1.75% in October and said it will go on lifting its benchmark rate over coming quarters, potentially taking the cash rate up to 3.5%.

But it backed away from that guidance in December following a series of disappointing economic figures and a rout in oil prices.

Investors had until then anticipated that January's BoC meeting would yield what would then be a fourth rate hike inside of 12 months.

Pricing in interest rate derivative markets had implied close a 100% probability of that happening as recently as October, but those markets now suggest there is almost zero chance of such a thing happening.

"Our BoC call matches our Fed call in terms of base rate moves, so we’re basically neutral on the interest-rate-differential fundamental. It was the driving factor for USDCAD for much of 2018, but now the driving factor is crude oil," says Anderson. 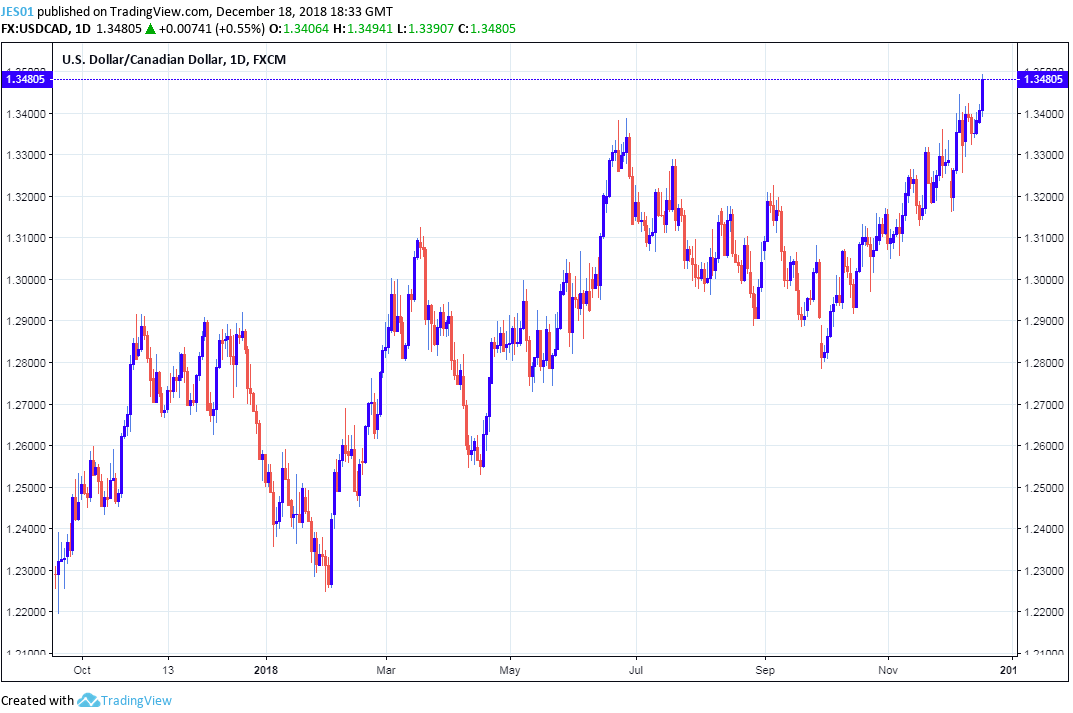 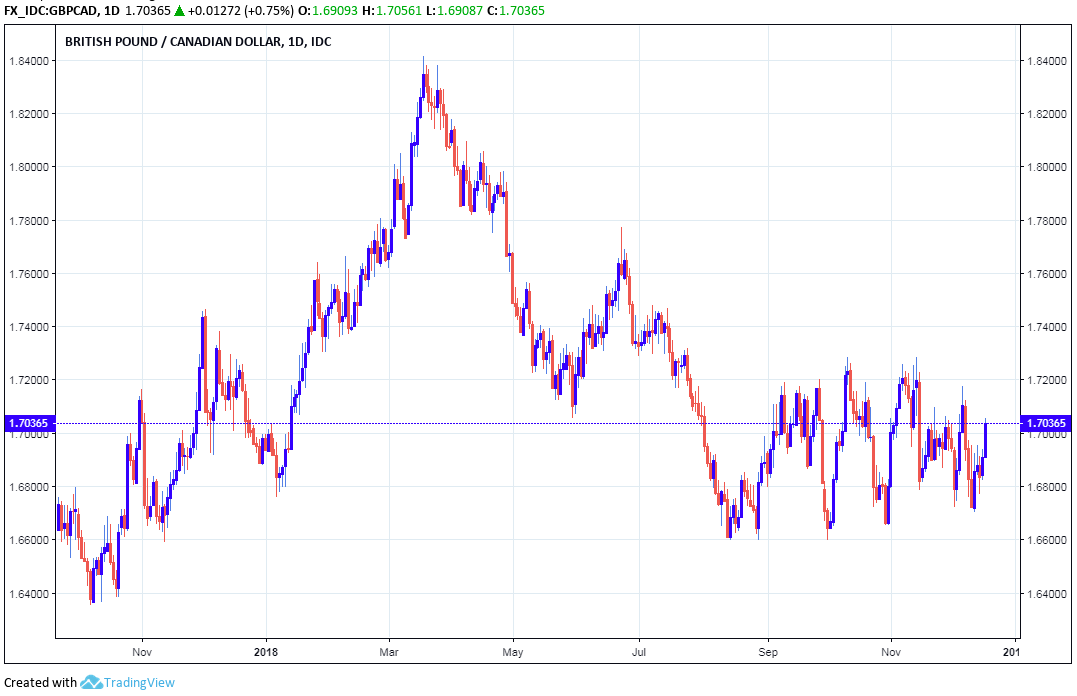 Oil products make up the lion's share of Canadian exports and the oil industry is responsible for a significant number of jobs across the business so price developments are important for the economic and BoC outlooks.

The Brent crude oil price has fallen close to 30% from $86 per barrel over the last three months, erasing an earlier double-digit gain for the year and leaving the global benchmark nursing a -13% loss for 2018.

Western Canadian Select, the domestic benchmark, has new record lows repeatedly and even traded below $20 for a period of time, but BMO says prices may now have bottomed out.

A recovery in both domestic and global oil markets would enable the Bank of Canada to lift its interest rate some time in the first-quarter and to follow up with another hike later in the year. That would offer support to the Canadian Dollar.

"Global oil prices are showing early signs of bottoming and the WCS blend is showing much firmer signs of recovery. To the extent they carry into 2019, CAD should outperform currencies with bigger troubles," Anderson says, naming the Pound as one currency susceptible to the advances of a resurgent Loonie.

Sterling's susceptibility to Canadian Dollar strength is the result of BMO's bearish outlook for the British currency over coming months, which is rooted in concerns over the trajectory of the Brexit process.

"The big wildcard for H2 is the election in October (presumably). Early polling is all over the map, but there is a reasonably high likelihood of a tightly contested election between the ruling Liberal Party and the Conservative Party. Tightly contested contests have been negative for CAD in previous election cycles," warns Anderson.

Canadians will go to the polls some time late in 2019 to vote for the next government. Elections mean uncertainty about future economic policies so currencies tend to fall ahead of national ballots, particularly when there are parties with controversial agendas that are riding high in opinion polls.

However, for the Canadian Dollar, next year's election and campaigns leading up to it could actually prove to be a boon for the currency because politicians are set to make ideas about improving Canada's economic competitiveness on the international stage a key part of their pitches to voters.

Measures to improve competiviveness are now long overdue in light of the U.S. tax cuts that were implemented in January 2018. Those almost halved the corporate tax rate, among other things, and some economists have since expressed concerns that Canada could lose out on much needed international investment as a result.

"If that becomes the case, markets may trade the theme and drive CAD higher," Anderson says. "We haven’t factored the election into our outlook for USDCAD in a major way, although there is a chance that it ends up being the key issue of 2019 when we look at it ex-post a year from now."