- Comes after Eurozone GDP fall, ahead of German data.

The Euro was treading water Tuesday even after the influential ZEW sentiment index fell to its lowest level since December 2011, which has given credence to forecasts for the single currency that are increasingly 'bearish'.

Germany's Leibniz Centre for European Economic Research sentiment index fell to -44.1 in August, from -24.5 previously, which was far below the -27.8 consensus expectation and takes the barometer of business conditions back to levels not seen since the height of the debt crisis that threatened to tear the single currency bloc apart.

This means the outlook for the German economy over the next six months has deteriorated rapidly in recent weeks, with President Donald Trump's August 01 decision to impose a 10% tariff on $300 bn of China's annual exports to the U.S. from September 01 being in the frame for the fall. U.S. trade tariffs are hurting the Chinese economy, which does a lot of business with the now-beleaguered German manufacturing sector.

“The most recent escalation in the trade dispute between the US and China, the risk of competitive devaluations, and the increased likelihood of a no-deal Brexit place additional pressure on the already weak economic growth. This will most likely put a further strain on the development of German exports and industrial production,” says Professor Achim Wambach, president of the ZEW.

Meanwhile, and barely two months into the third quarter, the ZEW measure of the Germany's 'current situation' also worsened notablywith the subindex falling 12.4 points to 13.5 in August. However, the latest figures were equally as dire for the Eurozone, with six-month expectations down 23.3 points in August to a new low of -43.6, while the current situation index was down 3.9 points at -14.5.

"This is a dreadful headline, similar to the depths reached during the financial crisis in 2008 and in late 2011, when the U.S. debt ceiling crisis roiled markets," says Claus Vistesen, chief Eurozone economist at Pantheon Macroeconomics. "It seems as if investors are anticipating chaos—a U.S.-Sino currency war, Brexit etc—or at least ascribing a very high probability to an accident. In other words, there is little current justification in the equity market, which is usually the best short-term gauge for the ZEW."

The ZEW survey asks 300 financial experts for their opinions on questions relating to the markets and economy. Participants are asked about the current situation as well as their six-months expectations concerning the economy, inflation rates, interest rates, stock markets and exchange rates.

Tuesday's survey comes barely a fortnight after Eurostat said GDP growth fell by half, from 0.4% to 0.2%, in the Eurozone during the second quarter and only a day before Germany's Destatis is set to publish its own numbers. It also comes as the European Central Bank (ECB) is widely believed to be preparing to cut its deposit rate further below zero and restart the quantitative easing program that saw it buy up a large part of the European bond market between January 2015 and December 2018.

"With the market pricing the ECB depo rate already close to -0.70% by mid-2020 (which could be seen as a soft floor for EZ rates), the ECB needs to over-deliver on the QE front in September to push EUR/USD below 1.10 and offset the current ongoing dovish repricing of the Fed (which could accelerate should trade tension increase). This supports EUR/USD for now – which is currently close to its short-term financial fair value," says Petr Krapata, a strategist at ING. 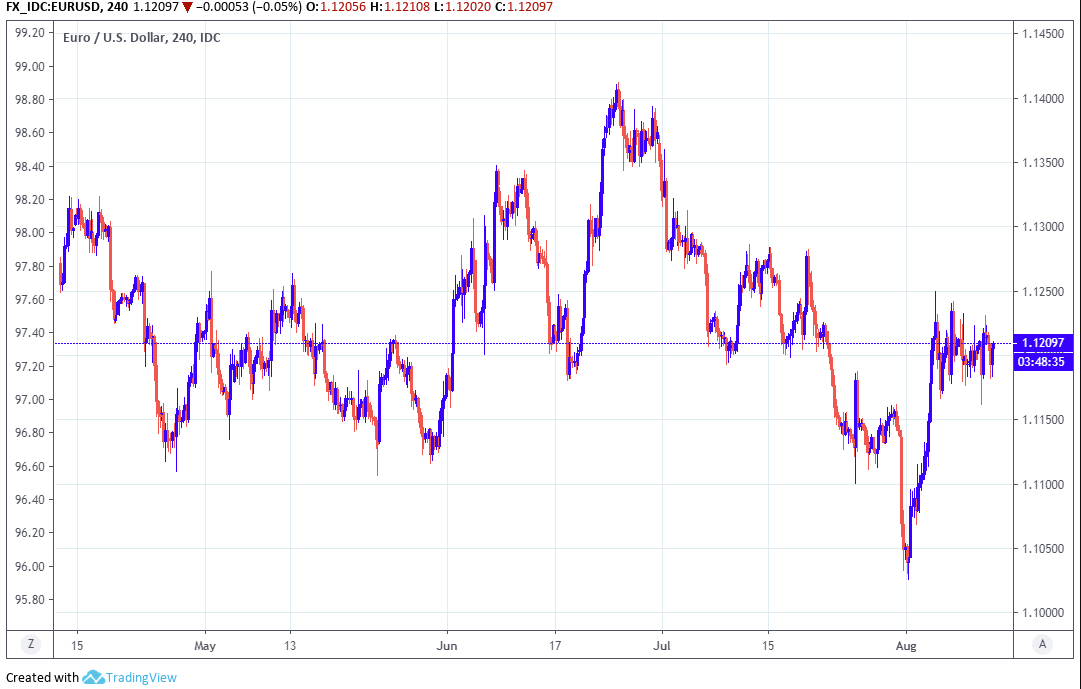 This is after Eurozone GDP growth tumbled in the second quarter, from 0.4% to 0.2%, although data for Germany is yet to be released and could well see that number revised downward in the weeks ahead. The German economy is expected to have contracted by 0.1% in the recent quarter, while Tuesday's survey suggests it remained weak in the current quarter too, although things could still get worse if the latest tariffs aimed at Chinese exports to the U.S. actually go into effect on September 01.

This weak growth outlook is further undermining the Eurozone's already-insufficient inflation rate and ratcheting up the pressure on the European Central Bank (ECB) to follow through on July's pledge of action in the event the outlook worsens. The bank said in July it's tasked staff with devising a "tiered system for reserve remuneration" and considering "options for the size and composition" of a new quantitative easing program.

BMO Capital Markets downgraded its Euro-to-Dollar forecasts last week and now projects the exchange rate will fall to 1.08 in the coming months, where it is seen remaining as an average well into the 2020 year, while Westpac followed suit this week. Germany's Commerzbank, which has previously been among the most bullish voices backing the Euro, cut its projection for the exchange rate at the end of September to 1.10 recently and 1.12 for year-end.

"The new escalation of the trade conflict and the hardening position of China suggests that any deal is unlikely any time soon. This tit-for-tat is also making any truce less credible. We are assuming further protectionist measures. This comes at a time when global manufacturing is in recession and the end of this does not look in sight. The trade conflict creates uncertainty, hurting business confidence, dampening corporate capex worldwide," says Georgette Boele, a strategist at ABN Amro. "We keep our year-end 2019 EUR/USD forecast unchanged at 1.12. We lower our 2020 forecast to 1.15 from 1.20." 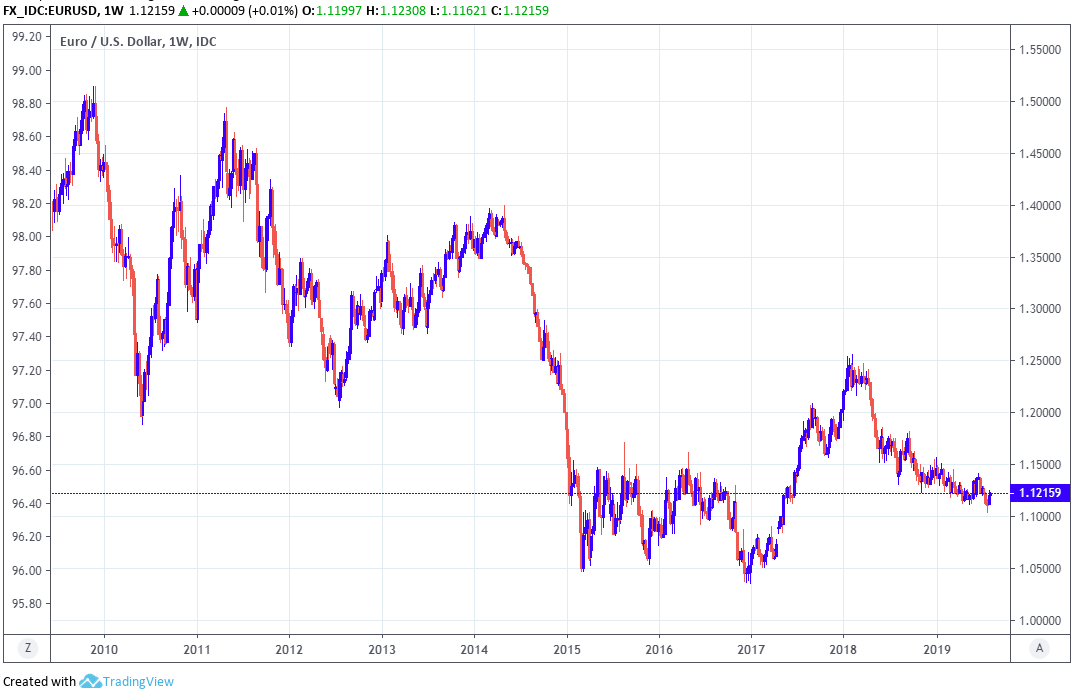