- GBP/CAD on front foot on weakness in 'high beta' early this week.
- But range slippage in play after GBP splutters & CAD outperforms.
- Would struggle at 1.74 & may be seen testing 1.72 in short-term.
- Economic data dominates for GBP as CAD eyes BoC speeches. 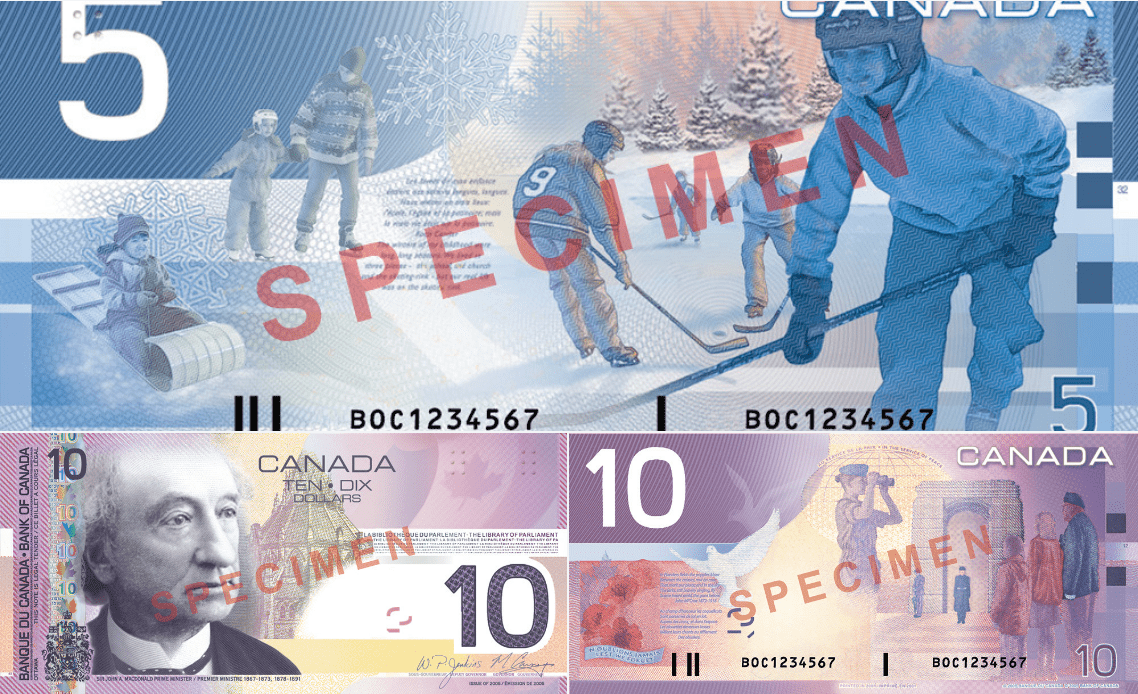 The Pound-to-Canadian Dollar rate was on its front foot early in the new week amid weakness in 'high beta' currencies but it could meet resistance at nearby levels and would be at risk of slipping back to early January lows over the coming days and weeks if the Loonie resumes its outperformance.

Pound Sterling was lower against many counterparts Monday and likewise the Canadian Dollar as well as other risky prospects after a weekend sacking of Turkey's central bank governor saw the Lira begin unravelling four-month gains of up to 20% in some cases, with spillover for other currencies.

Other risk assets like stocks and commodities advanced on Monday, belying weakness seen in higher yielding parts of the currency market. The latter saw the Pound-to-Canadian Dollar rate rising back above 1.7350.

Sterling's prospects are intricately linked with the reflation of the Eurozone and buoyancy of the Euro, which edged lower through March in line with an escalation of vaccine troubles that are stoking economic vulnerabilities.

"While some commentators have been quick to speculate about capital flight from the EUR, most of the developments which would normally cause investors to panic (i.e. protectionism, export bans, supply chain seizures, vaccine wars etc.) were not confined to Q4 but to Q1," says Stephen Gallo, European head of FX strategy at BMO Capital Markets. "We think it's too early to conclude that the EUR has been the victim of capital flight, but the magnitude of the outflows (provided they're not revised down) raises serious red flags about how resident and non-resident investors view the medium-term investment and economic growth climates for the bloc. And while the Eurozone's external trade position still looks favorable, the aforementioned capital outflows were well in excess of what would be required to offset the trade surplus."

This is a headwind for GBP/CAD and one that might be likely to see it struggle even without outperformance by the Loonie.

The Canadian Dollar has advanced on its own merit amid domestic economic strength but also spillovers from the U.S. where the vaccination programme has been ramped up and a $1.9 trillion fiscal support package signed off.

The net effect for the Pound-to-Canadian Dollar rate has been a range breakdown or slippage into a new and lower range after its own period of outperformance in February. 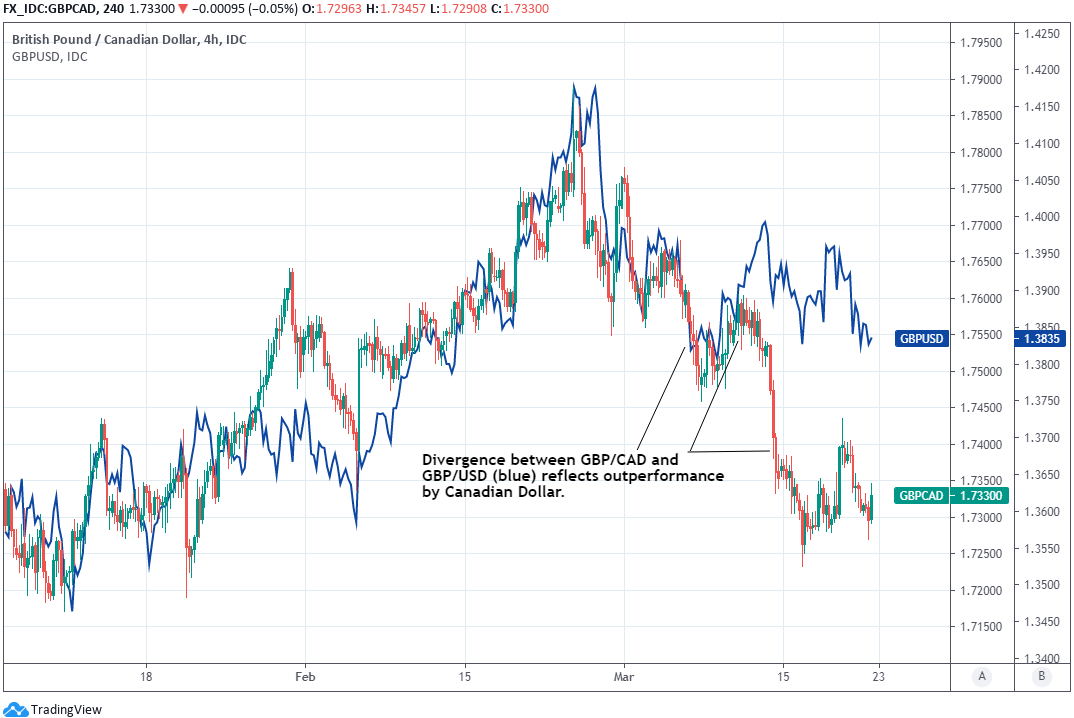 "Our preference is to remain tactical. We continue to like USD/CAD downside for now given that factors are still supportive, along with GBP/JPY downside," Rai says this week. "JPY looks very attractive on the crosses."

The evolution of the GBP/CAD breakdown was flagged by technical analysts at Scotiabank last week as likely to see Sterling slide toward 1.72.

"Short-term trend signals have turned GBP-bearish and longer run (weekly) DMI oscillators are neutral, which does nothing to curb the risk of more softness. The GBP needs to regain 1.7510+ shortly to avert the risk of more losses in the next week or two," writes Scotiabank's Juan Manuel Herrera, in a research note.

The Scotiabank team warned on Friday there's a risk of a USD/CAD correction higher, which has played out thus far on Monday and explains how GBP/CAD was able to rise on an intraday basis in a market where the main Sterling exchange rate GBP/USD was softening.

"The weekly chart formed a bullish “hammer” candle. But the lack of USD follow-through today reflects the still deeply-entrenched bear trend on the longer run studies," says Shaun Osborne, Scotiabank's chief FX strategist. "The impression that scope for CAD softness remains limited while yield spreads remain CAD-supportive. It’s a very light data week for Canada. The only calendar risk of note is tomorrow’s speech from BoC DG Gravelle who will address the role of the BoC in responding to market-wide stress."

Monday's Canadian Dollar losses were a brief boon for the Pound-to-Canadian Dollar exchange rate but with investors appearing to favour North American economic recovery prospects compared with Europe, Sterling could struggle to get the better of the Loonie in the absence of adverse market conditions. 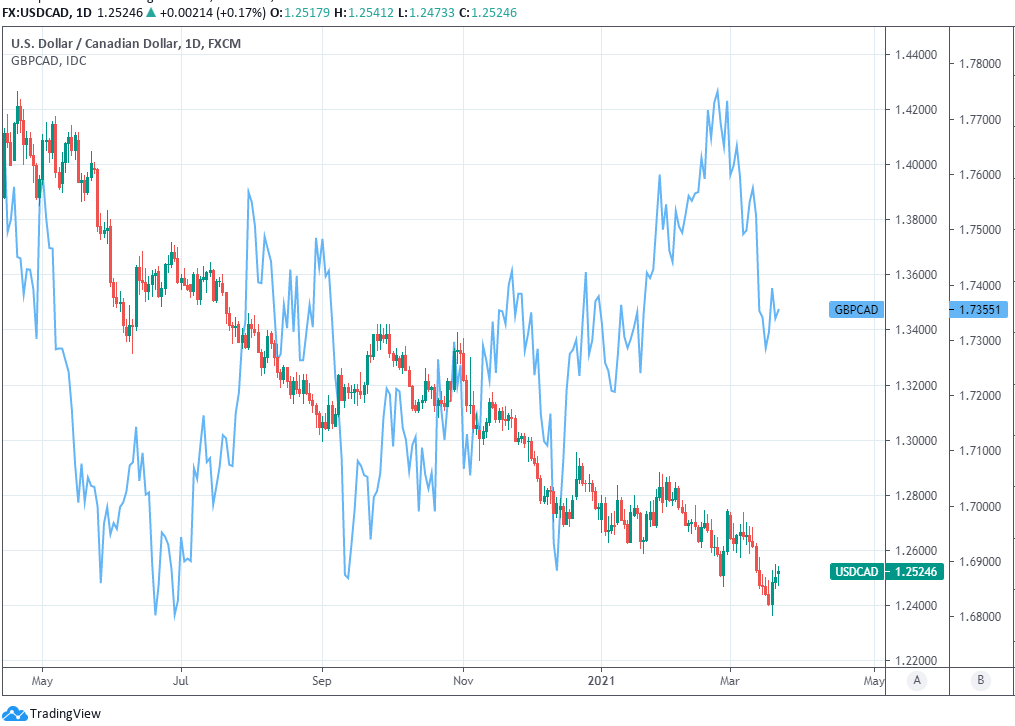 "Price action for USD/CAD remains moribund with forays above the 1.25 being met with additional selling pressure. That suggests that our downside tactical target at the 1.2250 mark is still live for the time being. Crude prices remain a bit defensive at the moment and present a risk to that view," says CIBC's Rai.

Monday's weakness in 'high beta' currencies shows GBP/CAD can still near the 1.74 handle - also around Sterling's breakeven for 2021 - but if Scotiabank and CIBC are right about USD/CAD then Sterling is at risk of slipping to 1.72 or slightly below when 'risk currencies' are on the offensive.

GBP/CAD - which always closely reflects relative price action in GBP/USD and USD/CAD - would be found a touch below 1.72 even in a trigger happy market where GBP/USD is reclaiming 1.40 if CIBC Capital Markets is right in its outlook for USD/CAD to slip down toward 1.2250 over the coming weeks and months.

Canada's economic calendar falls quiet this week but the Loonie could pay close attention to appearances from Bank of Canada (BoC) Deputy Governor Toni Gravelle on Tuesday and BoC Governor Tiff Macklem's participation in a Bank for International Settlements panel discussion 09:30 on Thursday.

Pound Sterling's calendar is crammed with key figures including the release of jobs data on Tuesday, inflation figures Wednesday and retail sales on Friday. In between all of these Bank of England Governor Andrew Bailey will take part in a panel discussion headed "Unlocking Investment for Net Zero" at an online event hosted by The Economist at 11:50 on Tuesday before participating in the same panel discussion as the BoC's Macklem on Thursday. 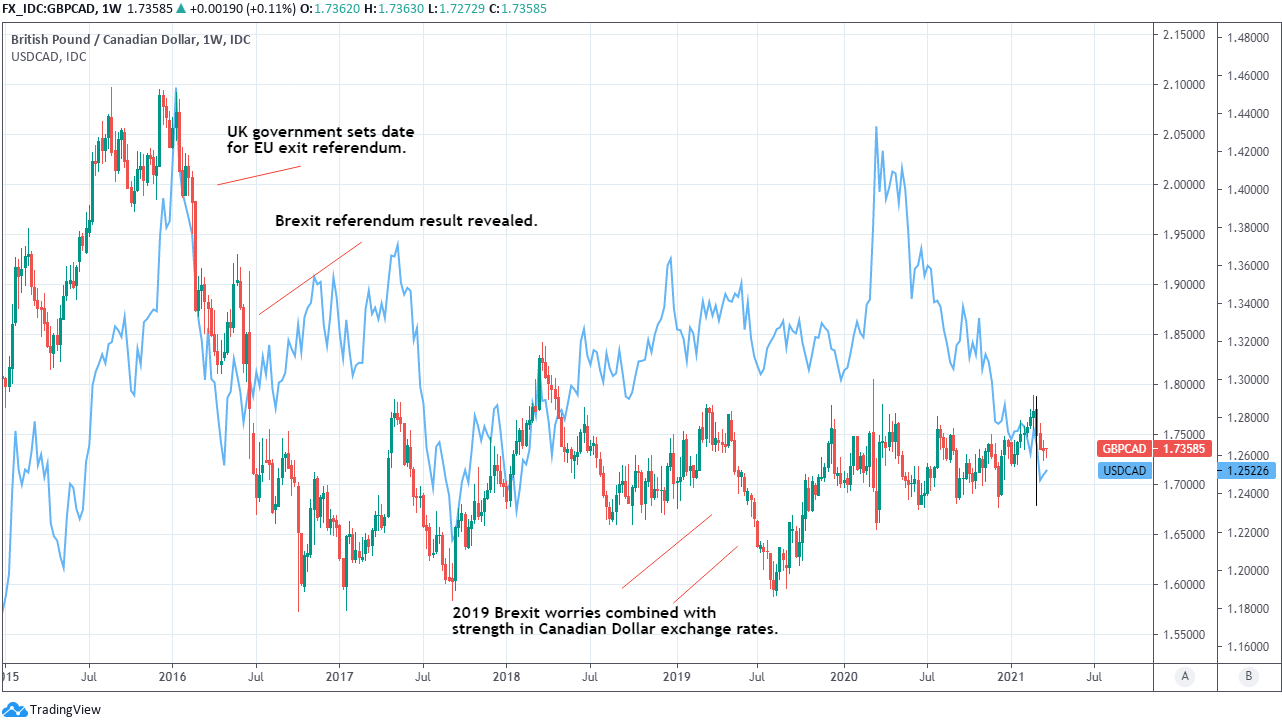