The Pound-to-Dollar exchange rate hit its best levels against the US Dollar at 1.4354 on Tuesday April 17, which represents the strongest rate since the EU referendum of June 2016. It has however faded back off these gains, in line with our warnings for such an outcome published this morning.

The previous post-referendum high was at 1.4346, reached on January 25 and we noted that on reaching this level in January, Sterling did retrace its strength and went lower and we were therefore wary of a repeat performance this time around on the basis that traders will have layered this vicinity with sell orders.

History tends to repeat in foreign exchange and the release of UK employment market data proved this to be a correct assumption.

Nevertheless, those looking to transact into Dollars on the retail market are still looking at excellent rates, with competitive retail quotes now being seen in the vicinity of 1.4210. We are however cautious that the Pound is heading in the wrong direction for UK exporters who have enjoyed a soft Sterling over the past two years.

Can the longer-term move higher in Pound Sterling extend?

As mentioned, we will be watching for a short-term retracement at the current levels and are wary that we have three days of important UK data on tap, so the Pound could certainly pullback if UK inflation, employment and retail sales data disappoint. 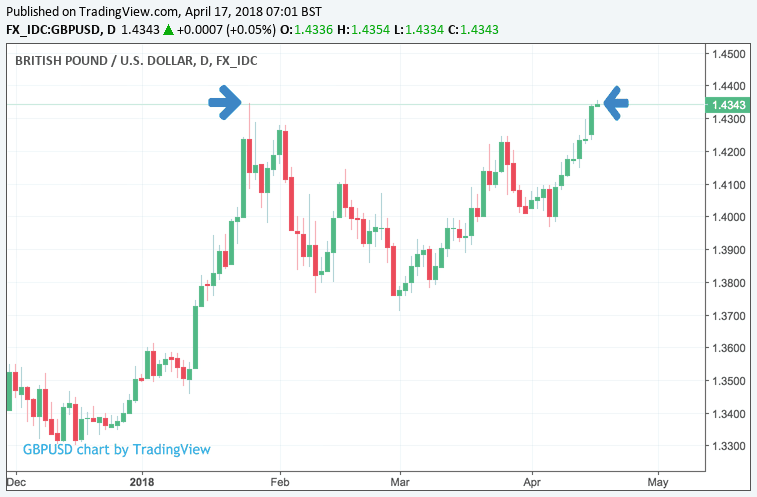 Above: The Pound has faced rejection at current levels before

"Several more days of preparation work may well prove necessary before a break to new cyclical highs is seen here but set-backs should nonetheless continue to prove corrective only," says Trevor Charsley, who sits on the FX Risk Management Solutions desk at brokers AFEX.

The decline in Sterling comes after the release of UK wage and employment data which both point to rising employment and wages in the UK economy. However, wage growth came in at 2.8% in March, where economists had forecast a reading of 3.0%; the disappointment appears to have knocked some wind out of the currency's sails.

Analyst Joel Kruger with LMAX Exchange is in agreement with the view that some restraint is likely saying in a briefing releaed on April 17 that GBP/USD "may not be ready to extend the run just yet in 2018, with daily studies starting to looked stretched following what has already been an aggressive move early in the year. Thisleaves the door open for a more significant corrective decline, with room to easily extend back below 1.4000."

So consolidation could well kick-in at current levels, and we would be wary of this occurring in light of the heavy economic docket on tap this week, any setback in the data could prompt such a move in GBP/USD.

What is apparent to AFEX's Charsley however is that the potential for further gains from here on a longer-term basis are certainly visible on the charts. 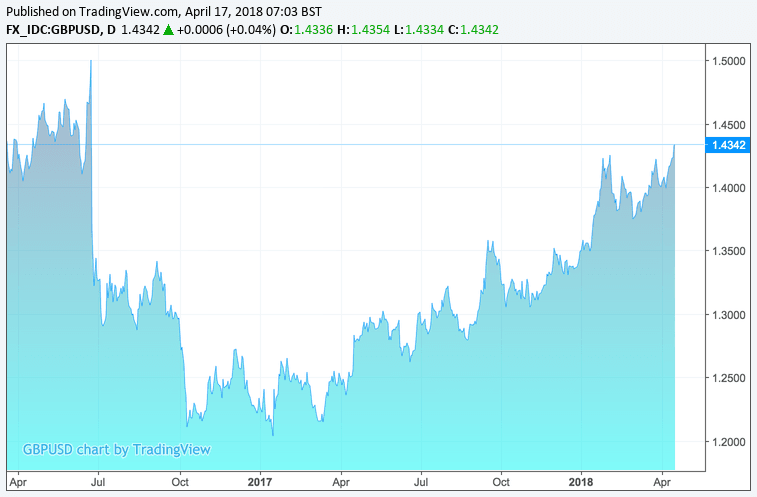 Above: The Pound has recaptured much of its post-referendum losses against the Dollar.

LMAX Exchange's Kruger is in agreement and is also eyeing 1.50; "the latest break to a fresh yearly high above 1.4346 has confirmed the next meaningful higher low at 1.3712, opening an eventual measured move upside extension to the 1.5000 area."

Analyst Bill McNamara at The Technical Trader says current levels don't look especially overbought and "that could mean that there is scope for further upside, and a break through 1.43 or so could conceivably lead to push back up to around 1.47".

And, unfortunately for the UK's exporters McNamara notes, "at that level, the post-Referendum devaluation bonus will have pretty much evaporated."

Longer-term, the prospects for the British Pound are quite fascinating with AFEX's Charsely noting that the Pound does tend to move in large, protracted moves against the Dollar.

"From a long term perspective a case could can be made for this broad upside retracement process lasting for several more quarters and possibly years," says Charsely. "At some
point a more significant Pound-centric sell-off is inevitable but historically speaking GBP/USD has gone eight or so years between majors lows: 1985, 1992, 2000, 2008 and 2016."

Moreover, the analyst notes previous GBP/USD downtrends have tended to be relatively short-lived, lasting something in the region of two years.

"Constructing a forecast from this behavioural characteristic implies the next such Sterling nadir will not be witnessed until 2024," says Charsley.

Therefore the down-move itself may well not start until 2022 or so we are told, which by extension leaves obvious retracement room on the upside in the meantime for many related pairs.