The Dollar was sold heavily on Friday with losses escalating following better-than-expected core retail sales and upgrades to earlier estimates, though in the final session of the week it was Pound Sterling and the Japanese Yen which led the advance on the greenback.

U.S. retail sales rose 1.2% in July, according to the Census Bureau, building on a June increase that was revised from 7.5% to 8.4% but otherwise underperforming a market consensus that was looking for only a 2% increase. Consensus had looked for a 5% gain back in June.

Core retail sales, which tend to garner more attention among economists and investors, rose by 1.9% when the market was looking for only a 1.3% increase. June's initial estimate of a 7.3% increase was revised higher to 8.3%.

The figures come hard on the heels of welfare claims statistics that confirmed a continued downtrend in the number of job losses suffered each week.

Together they indicate that America's economic recovery was not completely derailed by an explosive July increase in the number of new coronavirus infections detected each day.

"These figures do not include most services, which will have been more directly impacted by the tightening of social distancing restrictions in the past month. The deceleration in spending still suggests that the economy requires a broad fiscal support," says Katherine Judge, an economist at CIBC Capital Markets. 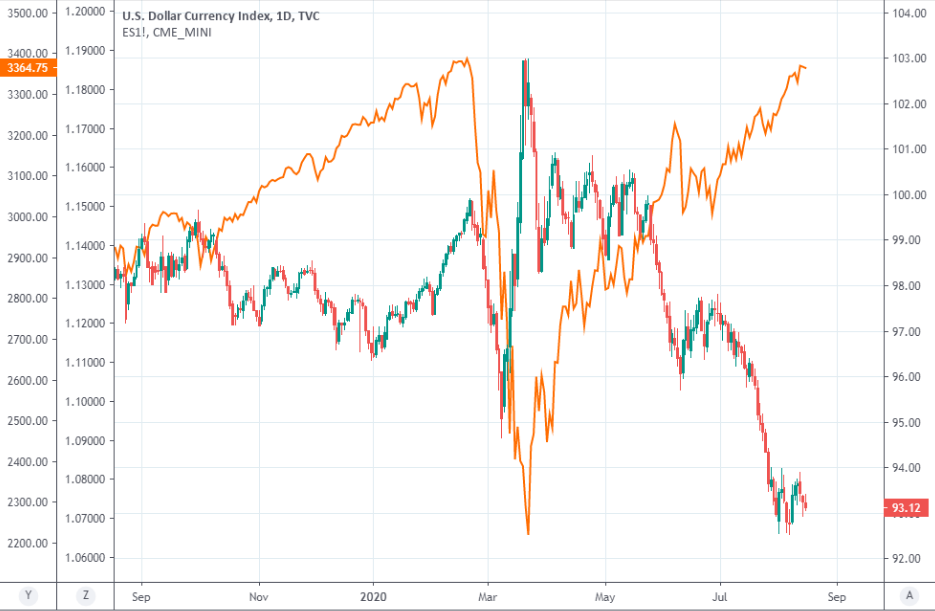 Above: Dollar Index shown at daily intervals alongside EUR/USD.

The Euro-to-Dollar rate advance stalled in the aftermath of the data, leading to a short-lived stabilisation of the Dollar Index, although other U.S. exchange rates continued to move lower in the wake of those moves amid a turning of the tables among Dollar depreciation pressures.

Friday's losses were just the latest in a long and growing line for the Dollar although on Thursday declines had been mainly to the benefit of currencies like the Norwegian Krone, Swedish Krone and Euro while on Friday they shifted to the Pound-to-Dollar rate, USD/JPY and to a lesser extent, EUR/USD.

Such price action gives the impression of a bullish and so-called 'risk-on' stance among investors, although that wasn't instantly reflected in the S&P 500 price action that followed, or stock markets over in Europe. U.S. stocks reached new records repeatedly this week and later again on Friday.

"European countries are starting to raise fears of fresh lockdowns in Germany, Spain and France; the lack of progress in Congress before its summer break on a new stimulus package for the US has cooled the boots of bulls as the S&P 500 neared an all-time high; and some fairly mixed Chinese data didn’t help," says Neil Wilson, chief market analyst at Markets.com. 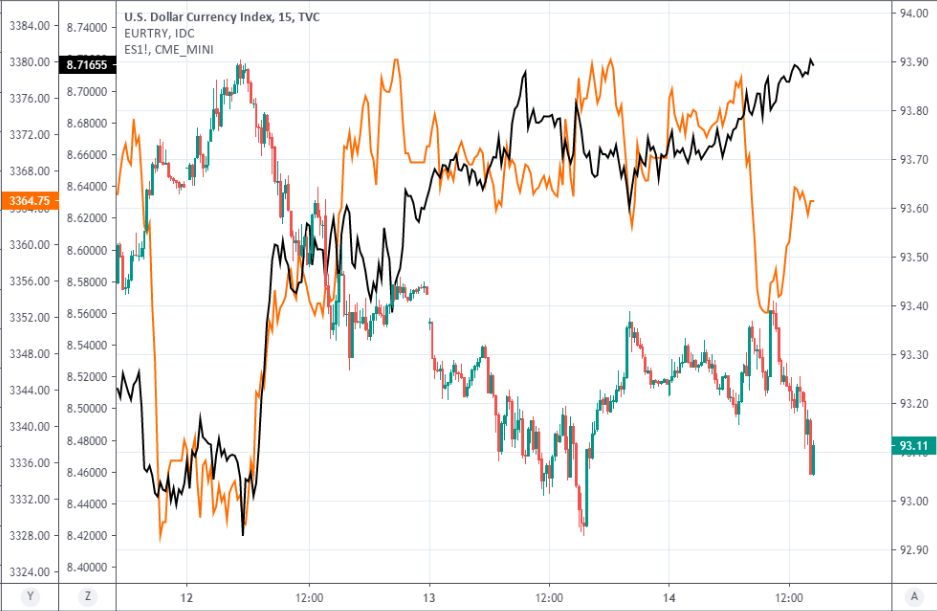 "August will probably end in storms, for markets and the English weather," warns Kit Juckes, chief FX strategist at Societe Generale. "The correlation between the euro and equity markets is higher than at any time since before the Fed's taper tantrum and the ECB's move to negative rates and QE. There is almost no correlation at all between bond yields and EUR/USD for now, despite the fact that they ought to be a bigger driver, really. This is only relevant today, of course, because the S&P 500 made a new high and that has helped EUR/USD move up from a test of August's low just below 1.17, and towards a possible (likely, really) test of the month's high  above 1.19."

Concurrent GBP/USD gains and USD/JPY losses will have eased recent upward pressure on the trade-weighted Euro while also facilitating a new record high for EUR/TRY in spite of a reduced upward impulse in EUR/USD. Depreciation pressures on the Turkish currency reached new extremes Friday.

The Pound-to-Dollar rate is a key battleground and in a trade-weighted single currency connundrum of late that likely necessitates a continued upward adjustment in the Pound-to-Euro rate that would fit nicely with the nascent narrative on the trajectory of the Brexit talks.

"The USD is under pressure, and the bears are in the ascendancy. However, we do not believe this weakness will persist and in these tumultuous times we find little reason to turn bearish on the USD. Many of the "nowcasts" for USD weakness are simply extrapolations of recent trends rather than forecasts. Many of these will wane. We remain positive on the USD's outlook against the EUR and GBP," says Daragh Maher, North American head of FX strategy at HSBC. 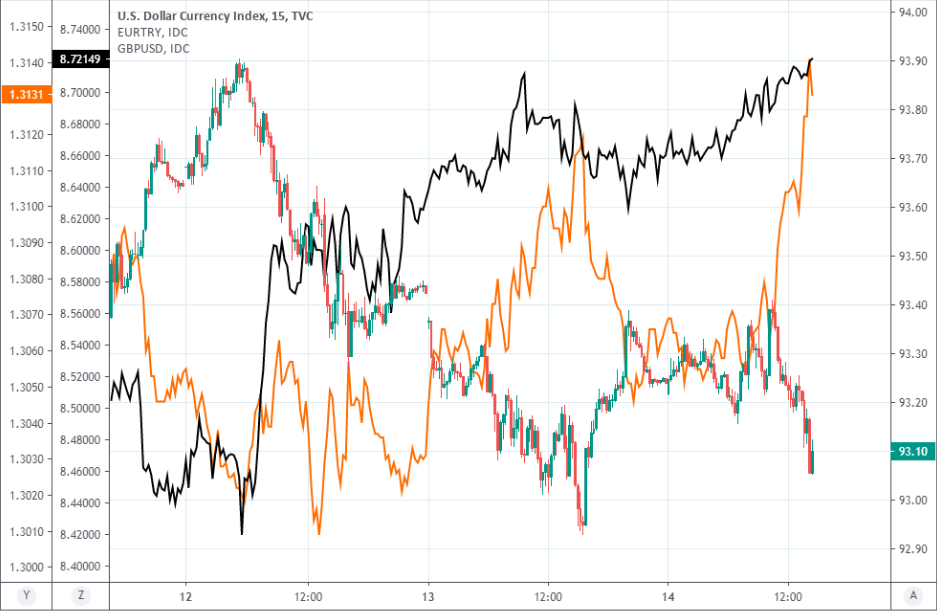