New Zealand’s Dollar staged a robust comeback in the fading light of 2020 after the Reserve Bank of New Zealand (RBNZ) backed away from the verge of implementing a negative interest rate policy, providing relief to Kiwi exchange rates, but the recovery has stalled thus far in the New Year.

Rising American bond yields and a stabilising U.S. Dollar are the chief culprits for a performance that’s seen the New Zealand Dollar retreat from all major currency rivals except the Swedish Krona, although it’s events closer to home which could constrain the Kiwi over the balance of 2021.

“We now expect the RBNZ to cut the OCR only one more time, with a -15bp tweak to 0.10% at the May Monetary Policy Statement. This further cut may not prove necessary, but as things stand it makes strategic sense.  If the housing market and domestic economy maintains momentum well into autumn, the RBNZ will not cut again at all,” says Sharon Zollner, chief economist at ANZ. “If COVID-19 returns to our shores in a significant way, a negative OCR will once more be game on. We expect the RBNZ to maintain a dovish bias for a long time yet in order to head off any premature tightening in monetary conditions that would undermine improvement in inflation and the labour market.” 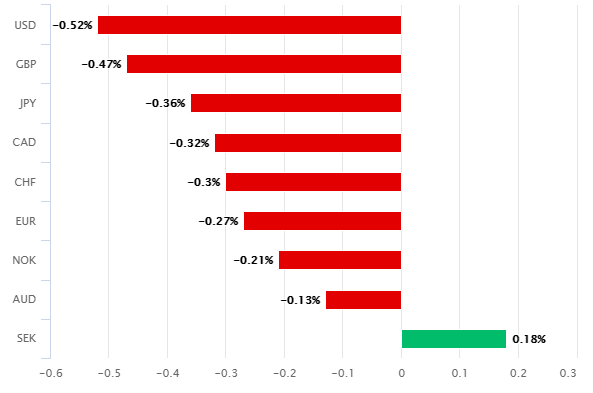 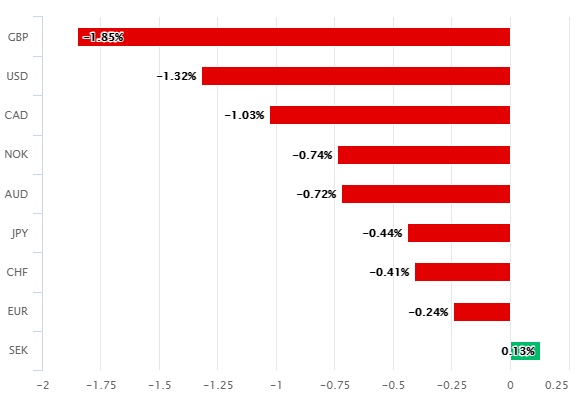 Above: New Zealand Dollar performance against major currencies on Wednesday and in week to Wednesday (right).

The RBNZ had appeared set to push New Zealand’s interest rates below zero from May 2021 before the economy began to stabilise and a house price surge fomented tensions between the bank and politicians in Wellington, leading it as well as the wider market to reappraise the outlook for borrowing costs.

On Wednesday prices in the overnight-index-swap market were indicating that investors expect the RBNZ’s cash rate to remain at 0.25% throughout the year, likely because of new guidance from the bank and widespread expectations that a proliferation of coronavirus vaccines will support a strengthening global economic recovery through 2021.

ANZ is not quite as optimistic and instead sees scope for one more interest rate cut to take the cash rate to a new record low of 0.1% in May this year, which is something that could foster further underperformance in Kiwi exchange rates, especially if the New Zealand economic recovery continues at a sufficient enough pace to lift inflation and more importantly; expectations for Kiwi inflation.

Returning inflation could lead investors to expect even higher price pressures further down the line and when rising inflation expectations are combined with falling interest rates, the result is always the same declines in “real yields” that have been widely credited with sinking the U.S. Dollar since the mid-2020. 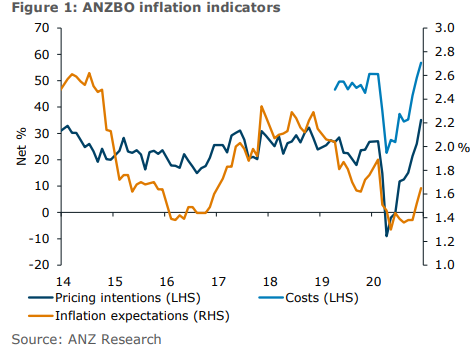 “In New Zealand, upside risk is emerging relative to the RBNZ’s inflation forecasts, reflecting less spare capacity in the economy than previously feared, emerging cost pressures, and improvements in inflation expectations, despite the TWI’s march higher,” says Liz Kendall, an economist at ANZ in a research note earlier this week. “But the starting point for inflation is still very weak and headwinds remain, meaning it will be a while before a return to target is assured over the medium term. For the RBNZ, downside inflation risks are much more problematic than upside ones – justifying continued RBNZ dovishness, willingness to do more with policy, and a bias towards easing.”

The RBNZ still expects inflation to remain a long way below the 2% midpoint of its 1%-to-3% target for a while yet, but New Zealand’s economy has been recovering faster than the bank and other observers had anticipated and if this continues the result could be even higher price pressures sooner than everybody had anticipated. By some measures, New Zealand’s economy was already larger in the third quarter of 2020 than it was in final quarter of 2019, indicating that it’s close to backfilling the hole in GDP caused by the coronavirus-related shutdown.

This could actually constrain the New Zealand Dollar, in the RBNZ’s favour, as much as any other policy strategy and in the process prevent further falls in the Pound-to-New Zealand Dollar rate. It’s debatable whether there was ever really any need for the RBNZ to cut rates below zero in the first place, although when the policy was first put forward rate setters were also grappling with a Kiwi exchange rate rally that was imperilling an already-troubled export sector and undermining the very inflation pressures that the bank is charged with fostering. 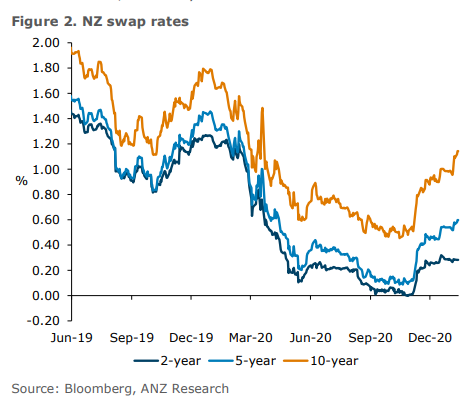 “If 2020 taught us anything it is to expect the unexpected,” says Mark Smith, a senior economist at ASB Bank, a partner of Commonwealth Bank of Australia. “There is the risk that a more resilient domestic demand and inflationary picture could see the economy firm and markets bring forward the timing of RBNZ rate hikes. The NZD could also push higher-still over 2021. The recent steepening of NZ and global yield curves and the high NZD suggests markets are cottoning onto this risk. This dynamic could well have further to run.”

Much like other central banks, the very last thing the RBNZ wants to see is a 2021 rally that lifts the New Zealand Dollar and sinks exchange rates like GBP/NZD, yet this is exactly what it might get if the Kiwi economy outperforms and the bank is unable to head off the increases using its monetary policy.

An additional interest rate cut, like that forecast by ANZ, just might help to do the trick and could support the Pound-to-New Zealand Dollar rate in the process. Better still, following in the footsteps of the Federal Reserve by adopting an average-inflation-targeting policy would likely be an even more powerful and effective way of putting the Kiwi on a leash.

New Zealand’s inflation rates have spent much of the past decade below the midpoint of the 1%-to-3% target range so adopting an averaging approach to inflation targeting could lead markets to assume for the time being at least, that a substantial period of near-zero cash rates now looms for New Zealand even if and when inflation rises back above 2%.

That would promise a protracted period of the same negative “real yields” that are widely expected to go on sinking the U.S. Dollar this year and would likely act as a roadblock for the Kiwi while providing relief to the GBP/NZD rate. 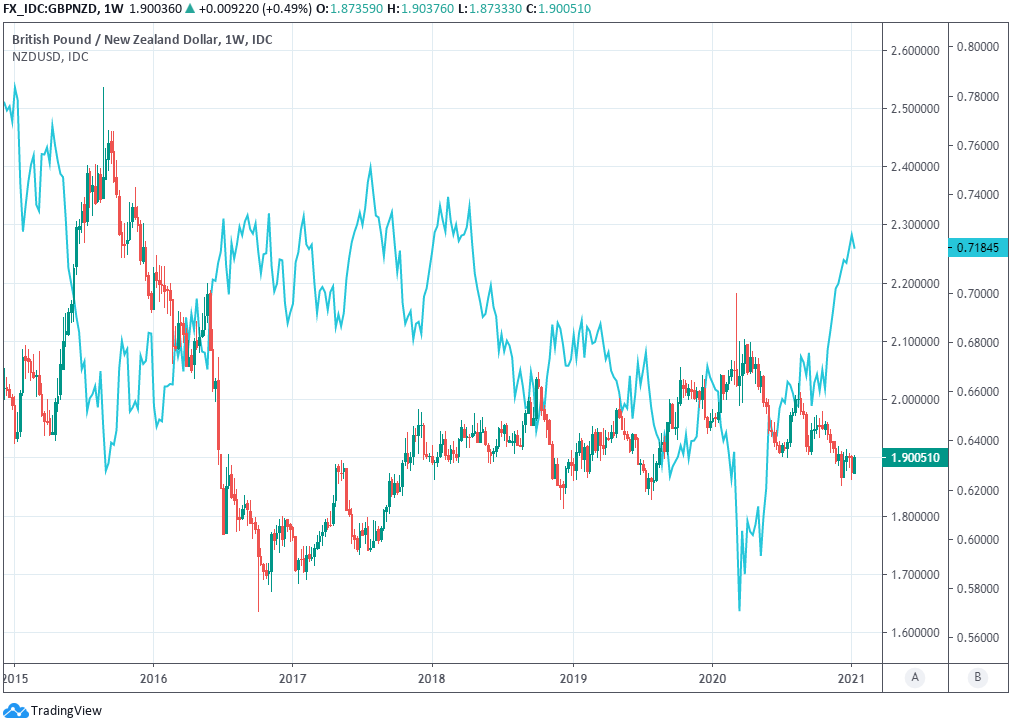