The New Zealand Dollar outperformed Friday as it benefited from an ongoing market reassessment of the outlook for Kiiw interest rates that's drove continued profit-taking in AUD/NZD, according to some traders, although analysts see scope for NZD/USD to rise above 0.70 in the coming weeks.

Kiwi Dollars were bought widely leading it to top of the board among major currencies as the stock markets advanced amid an upbeat investor mood that was resilient to a creeping encroachment of new coronavirus restrictions on city and state economies in the U.S.

Sentiment has been lifted and resilience for risk assets like the Kiwi enhanced of late by progress in the race for a coronavirus vaccine, which could prevent the 'lockdowns' that have taken large parts of Europe's economy offline in November and which disrupted New Zealand's recovery in August.

Pfizer and BioNTech said that they would be applying before the weekend for an emergency use authorization from the Food and Drug Administration (FDA), setting the ball rolling on a multi-week approval process they hope will culminate in a staged rollout as early as the New Year. 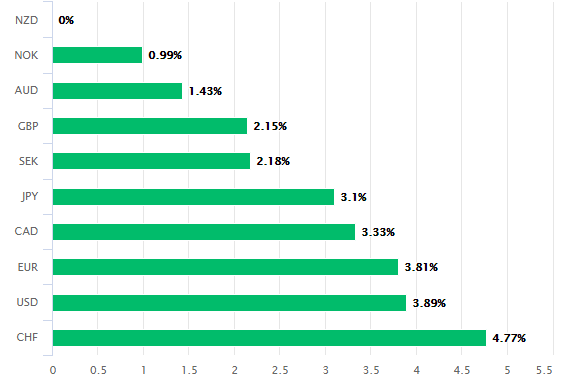 New Zealand's Dollar has led a global riposte against the U.S. Dollar in recent weeks, with only the oil-linked Norwegian Krone offering competition after the Reserve Bank of New Zealand (RBNZ) indicated it could be having second thoughts about whether subzero interest rates will really be necessary in 2021.

The bank had warned for months that it was busy taking care behind the scenes of the many technicalities involved with implementing a negative interest rate policy, leading markets to price-in a cash rate of -0.75% by the second half of next year, which weighed heavily on the Kiwi this summer.

However, with the about-turn in the bank and global market mood remaining upbeat, Westpac strategists are looking for NZD/USD to advance to what would be its highest levels since June 2018 over the coming weeks, with any dips viewed as buying opportunities.

"Multi-week, we continue to favour further upside beyond 0.7000, with the main drivers being expected further gains in the NZ economy, and global sentiment expected to remain elevated," Speizer says.

The Kiwi was still being aided against the other currencies on Friday by the RBNZ's policy shift and its resulting investor profit-taking on earlier bets in favour of AUD/NZD, according to some traders at a major bank in London.

"0.7220-7340 is the range to trade actively in AUDUSD, NZDUSD is less obvious as the bird seems to be benefitting from long AUDNZD unwinds but dips to 0.6800," reads a morning commentary from the London FX dealing desk at J.P. Morgan. "It’s hard to get overly excited about low yielding high beta currencies like AUD and NZD until equities really start to play ball."

RBNZ dovishness previously drove a sharp rally in AUD/NZD as investors bet on a Transtasman policy divergence, but with the bank turning its policy aircraft carrier just as the Reserve Bank of Australia (RBA) turned on the easing taps again, AUD/NZD has come undone at a more rapid clip.

In most cases and behind the scenes, dealing in AUD/NZD requires out transactions in NZD/USD for reasons relating to the mechanical plumbing buried in the walls of the market and in this case such transactions would necessitate the buying of NZD/USD. Such transactions could theoretically impact all Kiwi exchange rates, although they wouldn't be the only influence upon them. 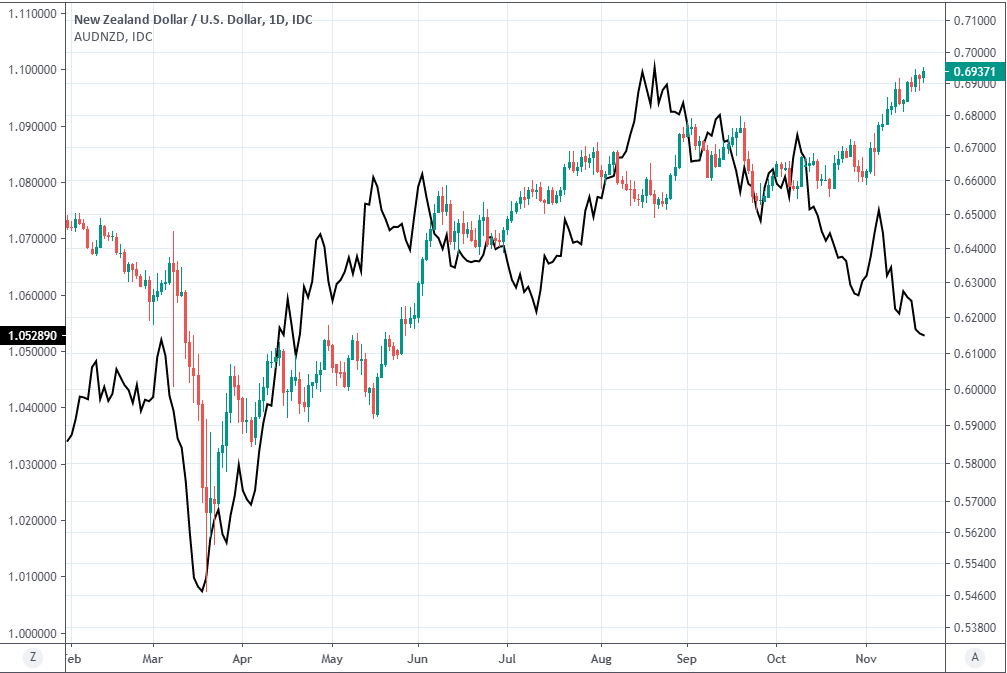