The British Pound was seen to be reclaiming some lost ground against the Euro and U.S. Dollar while solidifying the week's advances against the Yen, Australian and New Zealand Dollars following the release of the highly-anticipated flash PMI readings for the UK economy.

The flash PMI data gives the first credible look at how the UK economy performed in February, and the question for foreign exchange markets heading into this morning's data was whether the post-election economic bounce is being sustained.

The IHS Markit Composite PMI - which accounts for the services and manufacturing sectors - read at 53.3, this is above the 52.8 the markets was expecting and was unchanged on January's reading.

The Manufacturing PM read at 52.8, which is above the 49.7 forecast by markets and above 50.1 reported in January. This represents a 10 month high for the sector.

The all-important Services PMI - the services sector accounts for over 80% of UK economic activity - read at 53.3, a shave lower than the 53.4 that markets were expecting, and lower than the 53.9 reported in January. 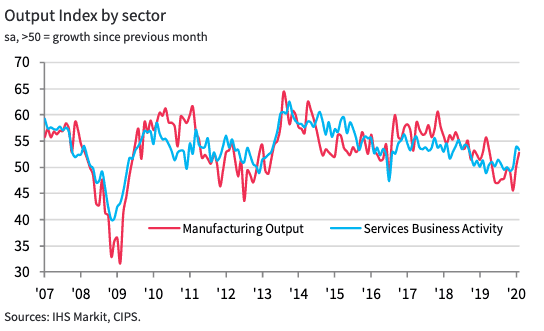 According to IHS Markit, "survey respondents noted that receding political uncertainty since the general election continued to translate into higher business activity and greater willingness to spend among clients. That said, the overall rate of new order growth eased from the 19-month peak seen in January amid a weaker expansion across the service economy."

The data suggests the post-election bounce does appear to have sustained itself into February which should justify the Bank of England's decision at the start of the month to keep interest rates on hold.

The recovery in UK economic activity has been a central pillar of support to the rally in Sterling's value that has been seen in 2020, further signs of a robust economy should provide a decent element of support to the currency as the EU and UK enter what are expected to be difficult trade negotiations.

"An interest rate cut is likely to be off the table for the time being, considering the highly promising economic data from the UK. Although the forthcoming trade negotiations may dampen sentiment, the UK pound remains fundamentally undervalued," says Marc-André Fongern, Head of FX Research at Fongern Global Forex.

Sterling had entered the day softer, but we reported early on that we don't see the weakness of the past 24 hours as being anything neccessarily specific to Sterling: a look at the broader FX market shows the Pound to be advancing against other currencies and we would suggest external factors are therefore driving the main Pound exchange rates at present. But this should change in mid-morning when UK preliminary PMI data is released, a strong set of numbers could ensure the Pound ends the week on a stronger footing.

It is important to note that Sterling weaknesses comes primarily against the U.S. Dollar which remains the top performer of 2020, indeed Dollar strength is proving difficult to resist for all currencies, not just Sterling. The Pound-to-Dollar exchange rate is at 1.2892 and it looks hard to bet against further Dollar advances at this stage. "At the very least, visibility about the future has increased again for several months. The corona effect will distort economic data in the near future, which will make estimating the course for the economy beyond the virus scare increasingly difficult. In this environment, the USD will remain supported," says Jan von Gerich, Chief Analyst at Nordea Markets.

Against the Euro, the Pound has fallen but ultimately remains well supported, particularly as the Euro is one of the worst performing major currencies of 2020 courtesy of chronically poor economic data suggesting the Eurozone economy remains in a quagmire of stagnation. The Pound-to-Euro exchange rate is quoted at 1.1945, a level that will disappoint those Euro buyers looking to transact at the big 1.20 level. The Euro has lost 0.68% of its purchasing power against the Pound over the course of the past month, and any sudden 'snap backs' like we have just witnessed can be expected. After all, markets never move in straight lines.

The Euro "has seen an aggressive rally higher," says Karen Jones, Head of Technical Analysts at Commerzbank. Despite the recent weakness, Jones says the Pound-Euro exchange rate would have to fall below 1.1614 before the Pound's multi-week period of appreciation is negated from a technical perspective. 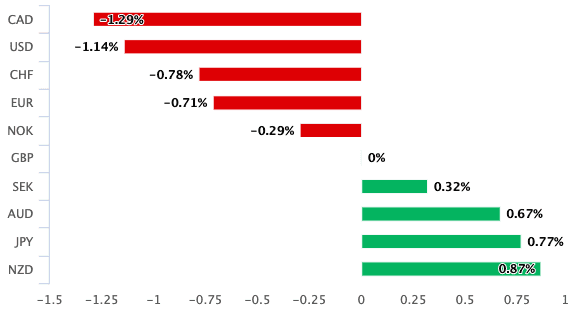 Above: Sterling's performance this week

The Australian and New Zealand Dollars appear to be suffering in sympathy with a breakdown in global investor appetite stemming from pervasive concerns regarding the coronavirus outbreak. While the outbreak itself is not throwing up negative headlines, the impact of the lengthy shut down to Chinese industry is causing concern. With Australia and New Zealand so dependent on Chinese trade, it is little wonder that the two currencies are suffering.

A decade-long bet on China via the Australian dollar continues to go catastrophically wrong - AUDUSD trading below the .66 handle tonight: pic.twitter.com/T6PHiG974H

Then there is the Yen, the currency that has caught perhaps the most attention this week following its brutal selloff on Wednesday. There were no clear triggers behind the move, but technical factors, concerns of a looming recession and Japan's own exposure to the coronavirus were all cited as being reasons for the sell-off.

The bottom line? Sterling looks to be a backseat driver at present and therefore the real story of the currency's declines and advances this week have more to do with what is happening elsewhere.

However, this could all change mid-morning London time when preliminary PMI data for the UK is released.

Markets will be looking to the PMIs for confirmation that the post-election bounce in the UK economy has been sustained into February, or whether the improvement in sentiment is a blip.

Make no mistake, disappointing data could hurt Sterling at this juncture as the outperformance of the UK economy has been one of the main drivers of Sterling appreciation in 2020.

Market consensus is looking for the Services PMI to read at 53.4, the Manufacturing PMI at 49.7 and the composite at 52.8.

Should the data come in above expectation we could expect Sterling to perhaps regain some of the ground it lost against the Dollar and Euro over the past 24 hours, while we would expect it to add to the gains it has recorded against those currencies that have endured losses this week.

"UK PMIs are also expected to drop this month, particularly considering January’s major rebound. This could hurt the already softer Pound. However, a data beat could see Sterling end the week strong and re-test $1.30 and €1.20 versus the Dollar and Euro respectively," says George Vessey, Currency Strategist at Western Union.