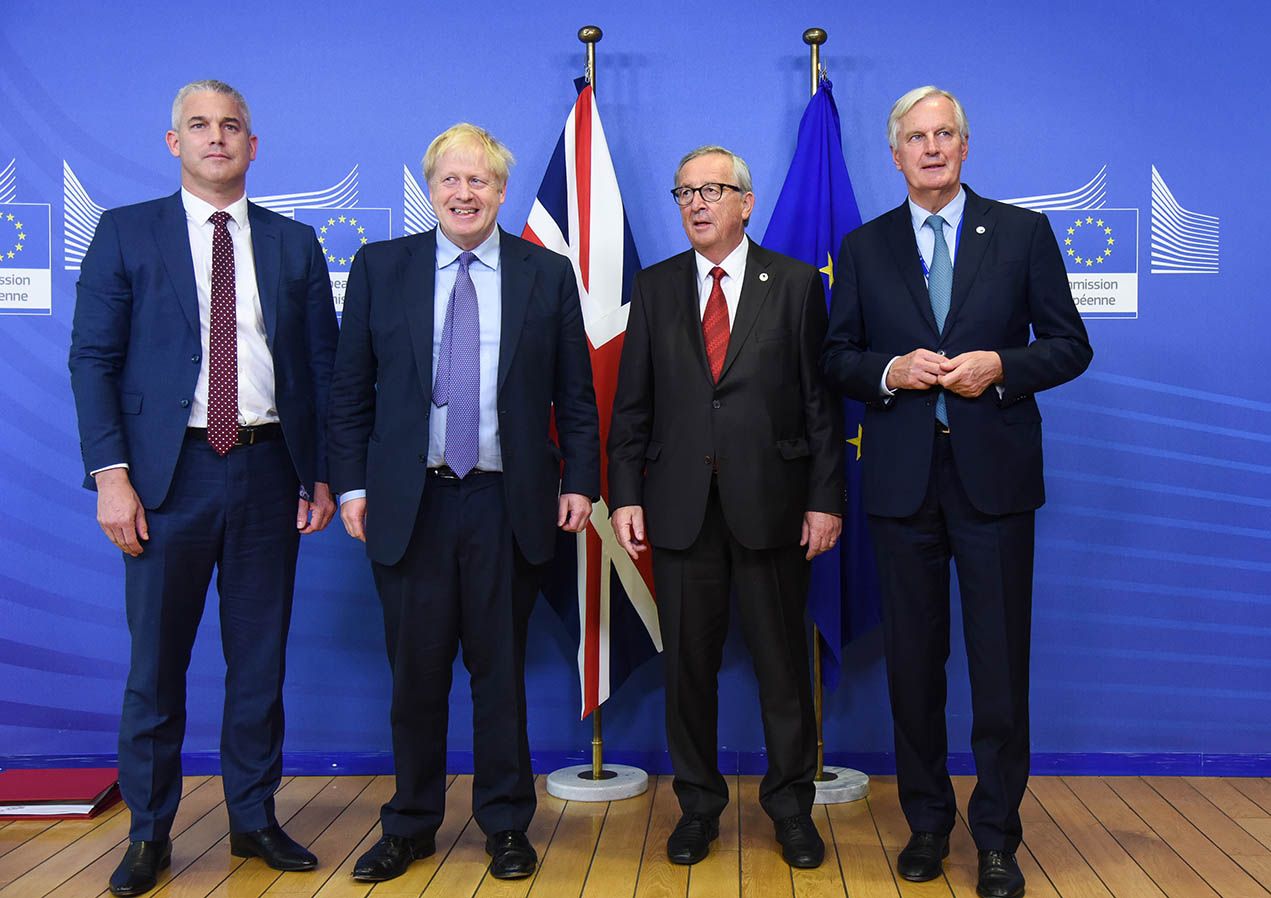 The British Pound holds near multi-week highs as the clock counts down to an important showdown in the UK Parliament where MPs will on Saturday be tasked with giving a 'meaningful vote' on the deal struck between the UK and EU in Brussels on Thursday.

The Pound rallied to new highs on news of the deal being struck on Thursday, before paring those gains as markets opted to take some profits off the table noting the passing of a Brexit deal will be a very tight affair.

Our key takeaway from currency markets at this point is that volatility should remain elevated and we could see more turbulent moves into the weekend as rumours, leaks and various briefings on who will and won't support the deal in tomorrow's vote.

"Today will be all about estimating how likely it is that the British parliament will agree to the Brexit deal tomorrow," says Roberto Mialich, FX Strategist with UniCredit Bank in Milan. "Position adjustments on Sterling ahead of the “meaningful” vote on Brexit in the UK parliament tomorrow are likely to be the name of the game for today, especially with the Brexit deal having come under threat after the DUP party rejected the agreed EU and UK proposal."

Prime Minister Boris Johnson needs 320 votes for his deal to pass - provided there are no abstentions - and analysis suggests that while it is still possible, victory might be just out of reach.

"We expect Brexit to dominate. Does PM Johnson have the numbers to push his deal through?" says Mathias Van der Jeugt at KBC Markets in Brussels. "Markets will be flooded with analysis on the arithmetic of the Brexit vote in the UK Parliament planned for Saturday. It is unlikely that the outcome will be clear before the vote will take place."

"The countdown to tomorrow’s Brexit might paralyse trading today. After recent positive positioning, a negative outcome of the vote might affect Sterling more than a positive one, even as the reaction in both scenarios might be significant," adds Van der Jeugt.

The latest number-crunching analysis from Sky News shows the Prime Minister could muster up about 316 votes, which puts him within striking distance of securing Brexit. It will therefore take just a handful of abstentions for the Government to win.

However a huge task is required and expect a day of intense lobbying, particularly of Labour Party members.

"We stick to our view that the optimism will not pass the test of the UK's Parliament," says Mikael Olai Milhøj, Senior Analyst with Danske Bank. "As such, markets appear rather optimistic across GBP/USD, EUR/USD, USD/JPY, AUD, SEK, yields and so on." 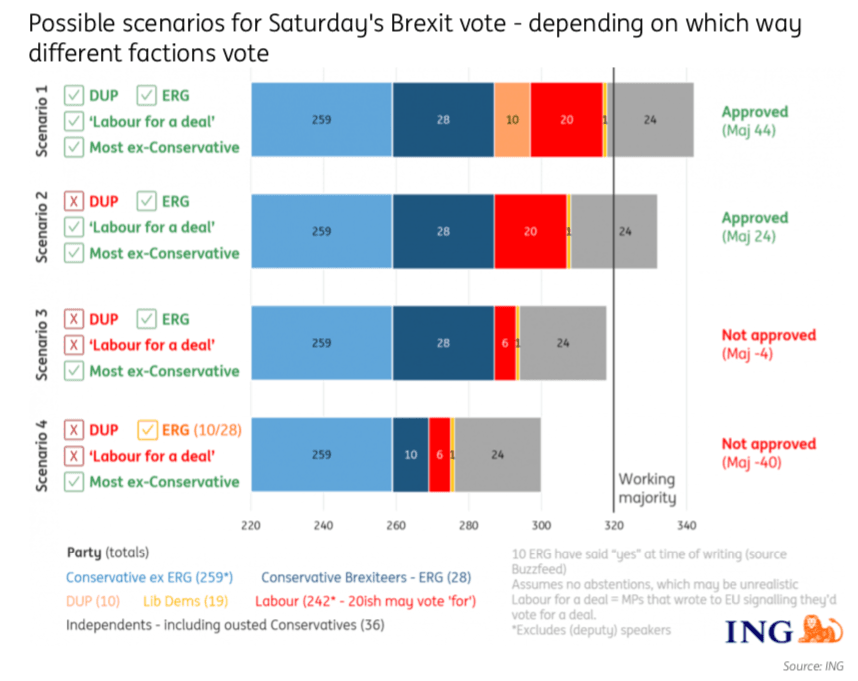 "Saturday's parliamentary vote on prime minister Johnson's Brexit deal is on a knife-edge. We currently reckon that the British government may be just two votes short of winning - although there are of course several moving parts," says James Smith, Developed Markets Economist at ING Bank N.V. in London.

By losing the support of the DUP the Government's job has become a great deal harder, with a number of opposition Labour MPs now required to deliver the magic number. "Everything will hinge on Labour. Five of their MPs voted for Mrs May’s deal back in March, and it looks like they will be joined by a sixth. But that would still leave the government a few votes short – and more opposition lawmakers will be needed to get the deal over the line," says Smith.

"Our base case is that deal will likely fail to get approved this Saturday, albeit by a very small margin of possibly 2-3 votes. This, coupled with GBP already trading at a premium vs EUR, suggests some reversal in GBP gains," says Petr Krpata, a foreign exchange strategist with ING.

Krpata says his research suggests the GBP/EUR exchange rate could fall to 1.1364 next week if MPs fail to pass a deal. 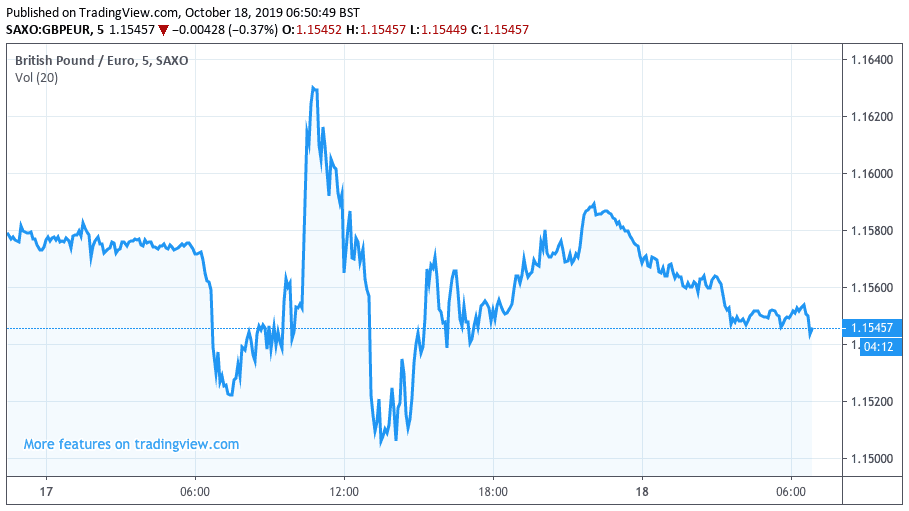 Above: Sterling volatility against the Euro over the past 48 hours.

It is reported by The Telegraph that Johnson is conducting "a major charm offensive to woo Labour leavers today, as the party appeared to be in disarray over its position on the Brexit deal".

It is believed that there are up to 19 MPs from the Labour benches that the Government could potentially get on board, a group led by Caroline Flint recently wrote to European Council President Donald Tusk and European Commission President Jean-Claude Juncker hinting they would back a deal if it was reached

"Between 10 and 15 Labour MPs are already prepared to back the deal to avoid a no-deal scenario, ahead of tomorrow's crunch vote in Parliament," adds The Telegraph.

It is widely reported today that in order to maximise the chances of success, Johnson will keep open the threat of removing the whip from any hardline Conservative 'Brexiteer' MPs who choose to vote against the deal.

And, The Times reports Conservative rebels who were kicked out of the party for voting for the Benn act are being told that the whip could be restored if they support him.

The general consensus emerging amongst currency analysts is that the striking of a deal will fuel further gains in the Pound, however, Milhøj warns gains might be limited: "in our view, if a deal does go through, a large part of that move is already priced."

Failure to pass a deal will however not necessarily be the hammer-blow to Sterling that might be expected.

If an extension is called for, which ultimately leads to an election in which the Conservatives campaign on a 'deal' ticket, then it becomes increasingly hard to see how a 'no deal' might come about.

Indeed, the big loser of the past 24 hours is 'no deal', and this offers some substantive downside protection for Sterling.

Danske Bank analysis suggests some, but not all, of the Pound's recent gains will be unwound if a deal fails to pass through Parliament on Saturday.

"The Conservatives are better positioned in an election with a deal on the table. In other words, the Sterling outlook is better from a tail-risk perspective," says Milhøj.

Going forward, the Pound-to-Euro exchange rate is forecast to trade in the 1.1765-1.11 range, "depending on the mood of the day".

While many in the analyst community believe the prospect of a 'no deal' Brexit has diminished by recent events, it is worth pointing out Johnson himself maintains that MPs are facing a deal or 'no deal' scenario on Saturday.

In short, he is still promising to take the UK out of the EU on October 31, even if the deal fails.

"He made it clear that Saturday's Commons vote on the deal will represent the final opportunity for Britain to leave the EU with a deal, otherwise a no deal Brexit will go ahead on Oct 31," says Gordon Rayner, Political Editor at The Telegraph.

How such a promise will be kept is not clear as the Prime Minister is bound by the Benn Act to request an extension of the EU if Parliament fails to pass a deal.

This therefore constitutes a 'known unknown' that perhaps foreign exchange markets could be accused of being too complacent.

If a deal fails, and Johnson does indeed succeed in circumventing the Benn Act, then expect some significant chaos and weakness across Sterling exchange rates.