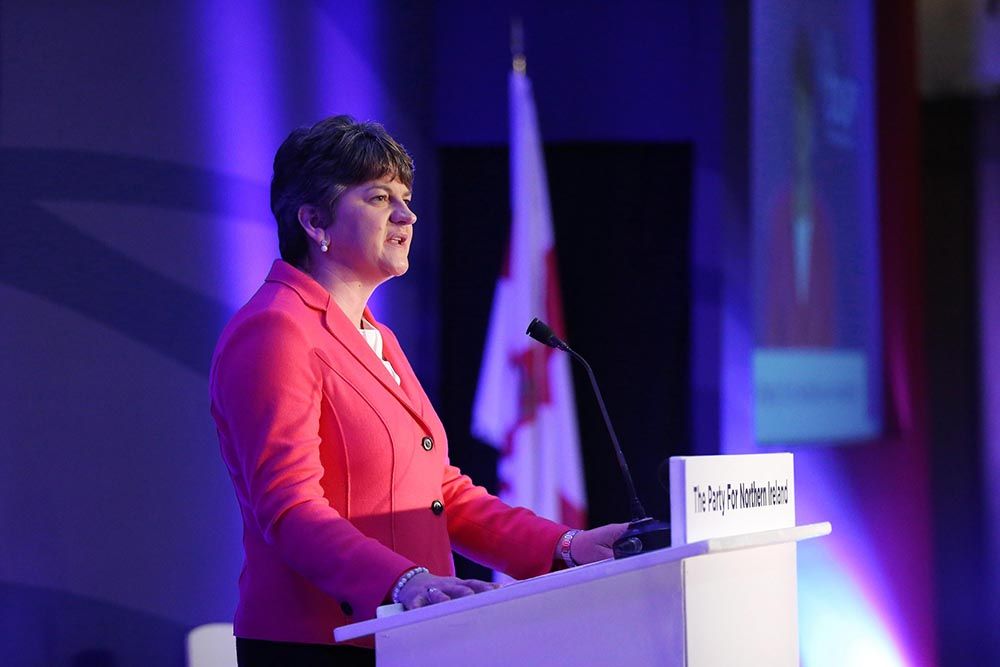 - Sterling stands to add to gains if deal struck, but upside limited on Parliamentary resistance

It's another volatile day for the British Pound which fell early on Thursday morning after the DUP - Northern Ireland's unionist party that backs the Conservatives in Government - said they could not back a Brexit deal in the form currently being proposed.

The DUP leader Arlene Foster did however say she is willing to continue working with the Government to try and secure a deal they could back.

In a written statement, Foster said:

"We have been involved in ongoing discussions with the Government. As things stand, we could not support what is being suggested on customs and consent issues and there is a lack of clarity on VAT.

"We will continue to work with the Government to try and get a sensible deal that works for Northern Ireland and protects the economic and constitutional integrity of the United Kingdom."

The Pound understandably fell on the news, but has since recovered lost ground.

"There seems to be no end to this tiresome saga, as no satisfactory agreement can yet be reached. Hence, my basic assumption remains that there will be another Brexit delay. Such a scenario, however, holds further imponderables for the British Pound," says Marc-André Fongern at MAF Global Forex. "Nevertheless, a last-minute deal that would fuel the UK Pound's upside potential cannot be ruled out."

With the European Council summit due to get underway, it was hoped that an agreement would be ready to be put before European leaders for a final sign-off that would then be put before the UK's parliament this coming Saturday.

However, with the DUP finally breaking cover, it appears the prospect of such a deal being achieved has diminished substantially. 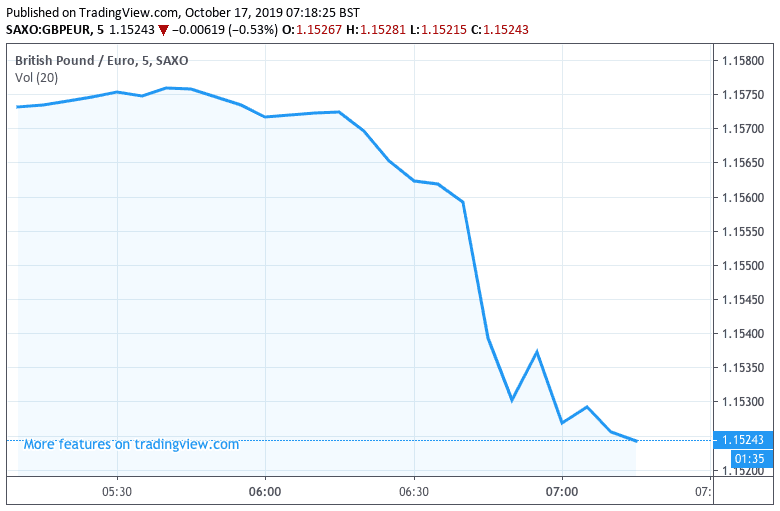 Above: A five minute chart of Sterling-Euro shows how the market reacted to the DUP news.

The Pound rallied on Wednesday on a report that the EU and UK had overcome obstacles to a deal relating to DUP resistance, and that agreement was imminent. However, DUP leader Arlene Foster was quick to deny the claim, and the Pound reversed the gains.

The price action confirms just how reliant on headlines the Pound is at present, and we would expect further such headline-driven action through the course of the day.

Negotiations between the EU and UK continued through the night and talks with the DUP are due to resume early today.

Looking at the foreign exchange markets, we can see Sterling is trading within touching distance of its recent highs, and one analyst says the currency should stay supported over coming hours:

"While the current rally is overbought, it is too early to expect a sustained pull-back. There is still room for further GBP strength but the pace of any advance is likely to be slower," says Quek Ser Leang, a currency market analyst with United Oriental Bank in Singapore. 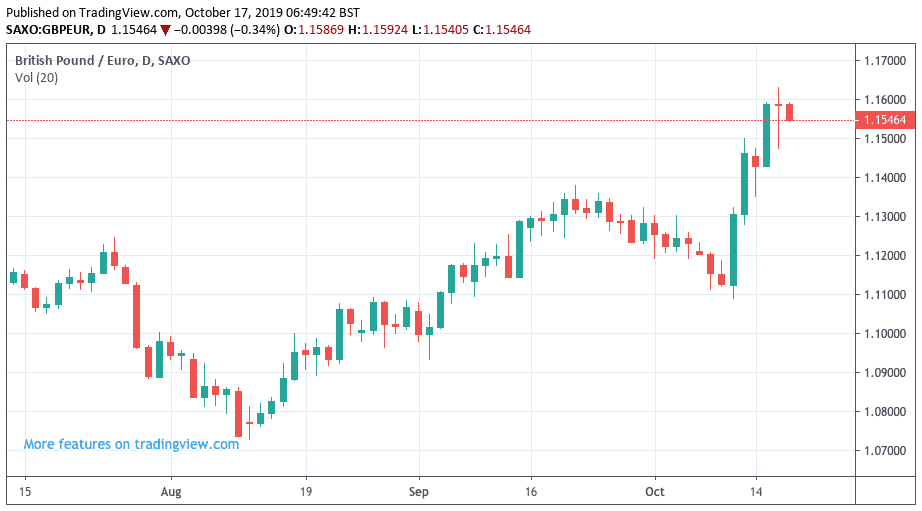 Above: Sterling-Euro appears to hit a ceiling.

Despite the DUP roadblock, the EU appear to be showing some optimism, with EU lead negotiator Michel Barnier, telling ambassadors last night that an agreement was all but done, opening the way for a formal sign-off today.

Angela Merkel, the German chancellor, said that the "final sprint" had made her confident of success.

Analyst Kim Mundy, with Commonwealth Bank of Australia, says news of a deal could spark further gains in Sterling:

"The EU’s leader’s Summit begins today. Market participants are waiting for confirmation (or otherwise) that the EU and the UK have reached a new Withdrawal Agreement. News of an EU‑UK deal today could see GBP/USD hit a fresh five‑month high above 1.3000."

UK Prime Minister Boris Johnson is apparently due to leave for Brussels this morning, where he might try and push the EU into compromise on the final, outstanding issues.

Markets are likely to keep one eye on Brussels, and another on Westminster where support for any deal the Prime Minister brings back from Europe must be secured if the UK is to leave the EU in the next few weeks.

It is widely accepted that all the cards must fall in Johnson's favour if he is to stand even the slightest chance of seeing his deal voted through.

Here are the parties to watch when pricing the probabilities of any deal finally getting through Parliament:

1) The DUP. The unionists are still not on board, but they are key: not only do they provide numerical support to the Government in Parliament, they also unlock the support of other Conservative MPs who are sceptical of a deal but willing to support an agreement that the DUP would back.

2) Conservative 'spartans': the 'spartans' are a core group of Conservative MPs who have consistently voted against a Brexit deal. They number around 28. Some are in government and are prepared to vote for a new deal, but it is believed more will need convincing. For the majority of this group, the final details of any deal are key, and therefore Johnson cannot make too many concessions to the EU.

3) Labour 'leavers': A group of about 20 Labour MPs are thought to be willing to vote for a deal, seeing it as a duty to deliver the result of the 2016 referendum to their leave-voting constituencies. However, press reports have suggested that if they vote with the Government they will be ejected from the Labour Party. The risks to their careers are high. Simply put, Johnson has to win over a number of Labour MPs for a deal to pass.

4) ex-Conservative MPs: There were 21 MPs who voted for previous deals but have since lost the Conservative whip when they voted for the Benn Act. Only some will be willing to vote for another deal. Kevin Maguire, Associate Editor at the Daily Mirror, yesterday said of the 19 ex-Conservative MPs (2 other joined Liberal Democrats) only 6 might back his plan.

"There is one important question for the market: is an agreement at a political or legal level reached in the next 24/48 hours between the UK government and EU27? If so, we would maintain our bullish sterling and bearish real rates recommendation from last week. If not, we would close these recommendations," says Oliver Harvey, a strategist with Deutsche Bank.

CBA's Mundy says the Pound will likely give back a good deal of ground if Johnson fails to secure a deal.

"GBP/USD will likely trade lower closer to 1.2200 if Johnson can’t seal a Brexit deal with the EU or get any deal passed through the House of Commons," says the analyst.

If Johnson cannot secure a deal with the EU or get it passed through the House of Commons by this Saturday, the Benn Act requires Johnson to ask the EU to postpone Brexit to 31 January 2020.