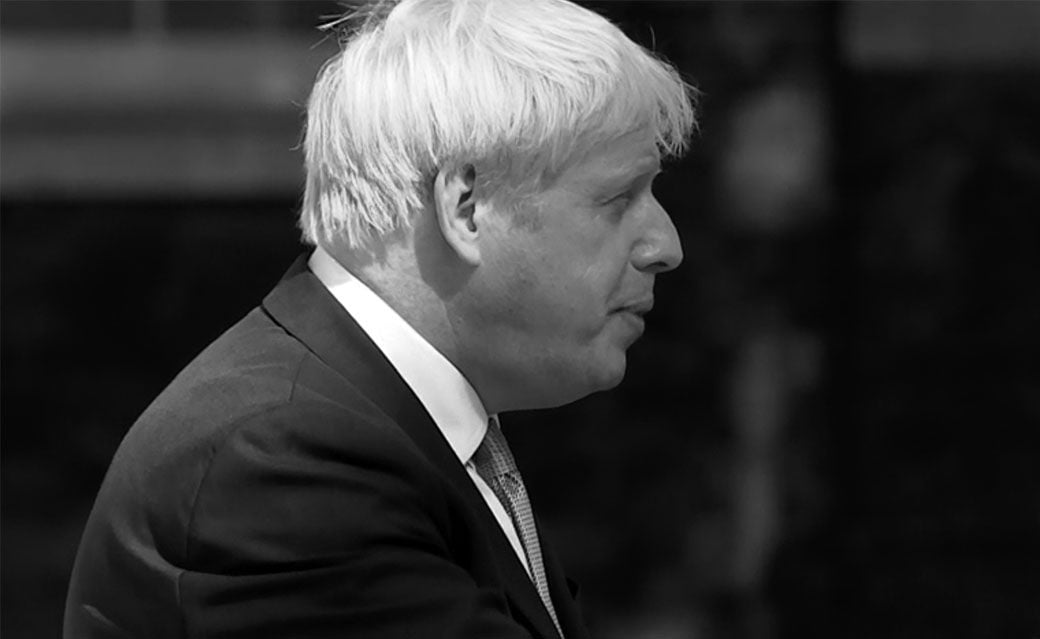 - DUP now said to be onboard with Brexit deal

Pound Sterling was seen trading higher midweek on headlines out of Brussels that a Brexit deal is about to be agreed.

Tony Connelly, RTE Europe Editor, said he has has been told by two senior EU sources "the main stumbling block to a deal has been removed with the DUP accepting the latest proposals on consent... Optimism a deal can now be done."

"I have four sources confirming the original report," adds Connelly.

"Sterling ripping higher yet again on Connelly headlines, the hype is real let's hope there's something to it!" says Ranko Berich, Head of Market Analysis at Monex Europe.

However, in typical fashion, the rumours were swiftly denied.

"'EU sources' are talking nonsense. Discussions continue. Needs to be a sensible deal which unionists and nationalists can support," Arlene Foster, leader of the DUP, said on Twitter, following the Connelly report. Yet for now at least, markets are of the opinion that where there is smoke, there is fire.

Negotiations between the EU and UK have continued today as both sides try to find the necessary compromises to put an agreement before EU leaders at tomorrow's European Council summit.

The developments have spurred a recovery in Sterling, which was trading sharply lower earlier in the day on suggestions that the bridge between the two sides was simply to great to cross. We continue to expect volatility to remain elevated over coming hours and days. 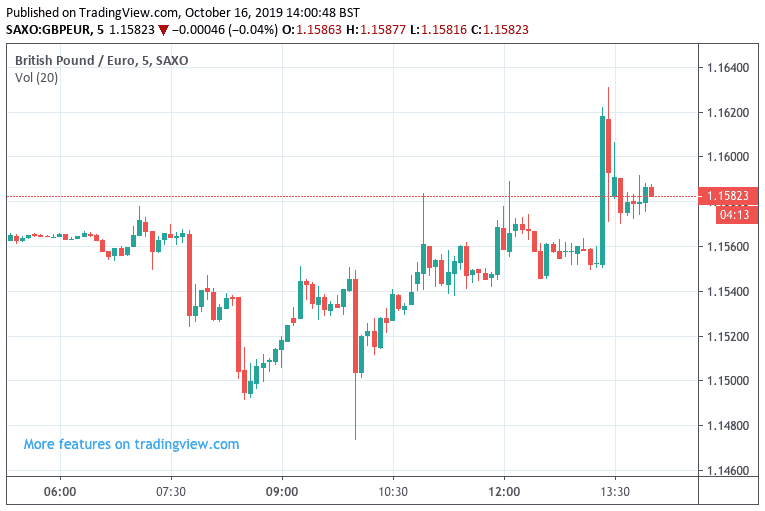 Above: Sterling is highly senstive to headlines today. Above shows moves in GBP/EUR through the course of the day, showing a spike on Brexit progress headlines.

The main sticking point has been that any deal struck between the UK and EU required the backing of Northern Ireland's unionist party the DUP, as Prime Minister Boris Johnson knows it is futile to put a deal before Parliament that his partners will not back.

The DUP met with Johnson mid-morning, with Johnson's representative in Brussels said to have paused talks as the outcome of the meeting was awaited.

Back in the UK, the pieces are in place to present a deal with a cabinet meeting scheduled for 2PM. A meeting of Conservative MPs - those not in government - will then be addressed by Johnson at 7:30.

Expect the Government at some point to ask for a sitting of Parliament for Saturday.

Of course, a last-minute disappointment remains possible if the two sides in Brussels are unable to overcome the final sticking points by today.

"Price action could prove treacherous in both directions in the near term," says John Hardy, an analyst at Saxo Bank. 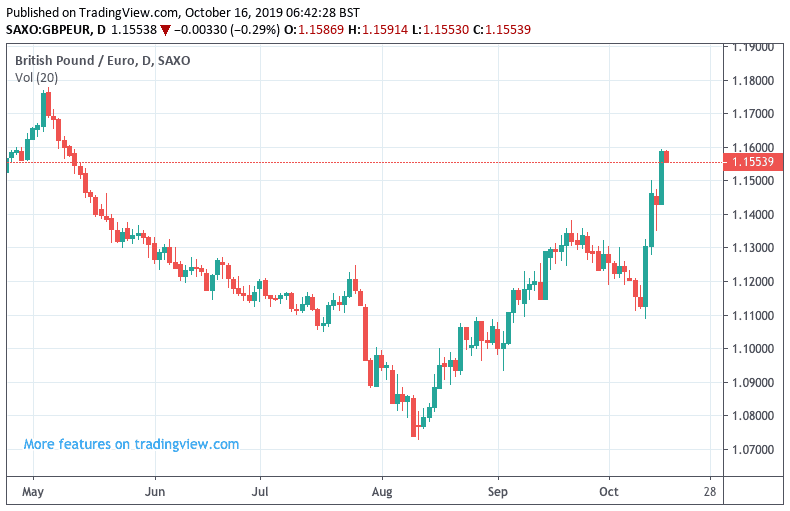 Above: Sterling-Euro approaches the levels seen when optimism that Theresa May's deal might pass was running high

Risks for Sterling are heightened and remain two-way in nature as even if the EU and UK reach a deal, there is no saying MPs would pass the deal when it appears before them in the House of Commons.

We expect any agreement between the EU and UK to largely be 'in the price' of the Pound at this stage, and what matters going forward is the reaction of the following constituencies:

1) Northern Ireland's DUP. The DUP not only provide numerical support to the Government in Parliament, they also unlock the support of other Conservative MPs who are sceptical of a deal but willing to support an agreement that the DUP would back.

2) Conservative 'spartans': the 'spartans' are a core group of Conservative MPs who have consistently voted against a Brexit deal. They number around 28. Some are in government and are prepared to vote for a new deal, but it is believed more will need convincing.

3) Labour Brexiteers: A group of about 20 Labour MPs are thought to be willing to vote for a deal, seeing it as a duty to deliver the result of the 2016 referendum to their leave-voting constituencies. However, press reports have suggested that if they vote with the Government they will be ejected from the Labour Party. Either way, Johnson has to win over a number of Labour MPs for a deal to pass.

4) ex-Conservative MPs: There are about 21 MPs who lost the Conservative whip when they voted for the Benn Act. They all voted for a deal in the past, but they must still prove to be on-side. It is for instance believed Amber Rudd might vote against the Government.

"Hearing of 19 Tory MPs who Johnson left whipless (2 other joined Liberal Democrats) only 6 might back his plan. Some met No 10 and feel he’s pandering to the ERG 'Brextremists' and courting DUP instead of them. Tough to secure enough Labour rebels to cover for lost Conservative votes," says Kevin Maguire, Associate Editor at the Daily Mirror.

In short, the task facing Prime Minister Boris Johnson is a tough one, and foreign exchange markets know this.

We would expect a crucial moment for Sterling to come when the DUP give their assessment of the deal: if the DUP are for the deal, then the likelihood of an October 31 orderly Brexit rises significantly.

Under such an outcome expect to see the Pound trade with a positive bias and potentially achieve further multi-month highs.

"An agreement to avoid a no-deal Brexit would reinforce this near-term reversal of risk-bearish trends; an orderly departure could mean further GBP/USD rallies towards 1.30," says Paul Meggyesi, FX Strategist with JP Morgan. "For the first time our economists now believe a negotiated Brexit within a matter of weeks is now the single most likely path ahead." 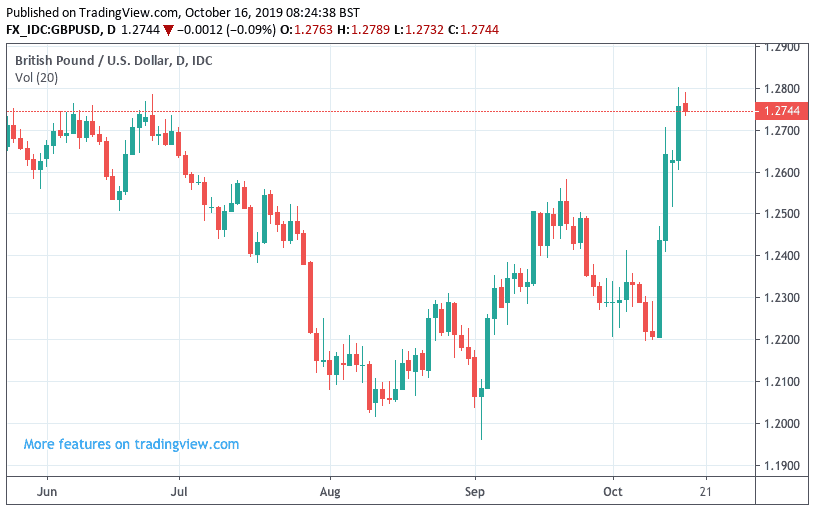 Above: Sterling-Dollar price action on a daily timeframe

However, a DUP rejection would almost certainly mean the deal is dead, opening the door to further uncertainty as a General Election will ultimately be required to settle the Brexit question, inviting another number of unknowns to come into play.

Expect Sterling to reverse and go lower under such a scenario.

Economists at investment bank JP Morgan say they have shifted their baseline expectations for Brexit to be delivered in the near-term under a revised withdrawal agreement (50%), over a further extension (45%) or a 'no deal' Brexit (5%).

However, even under a negotiated deal, there will be limits to the Pound's ability to go higher, as strength "should be capped by the reality that even a negotiated exit will subject the UK economy to frictions and disruptions that will demand an ongoing GBP discount," says Meggyesi.

The UK economy is slowing suggest the latest data, with October's labour market statistics showing that the number of vacancies in the economy continues to shrink while unemployment increases, with some economists saying Brexit uncertainty has lead to a delay in the kind of investment decisions that create fresh jobs.

How businesses react to any Brexit deal will therefore be crucial to the economy's outlook.

"For now it should be remembered that a Johnson Brexit would still be relatively hard from an economic perspective, and this should limit the outright relief in GBP. The currency needs to re-price to remove the risk of a no- deal collapse, certainly, but a Johnson hard-Brexit should cap the relief in the 1.30 region," says Meggyesi.