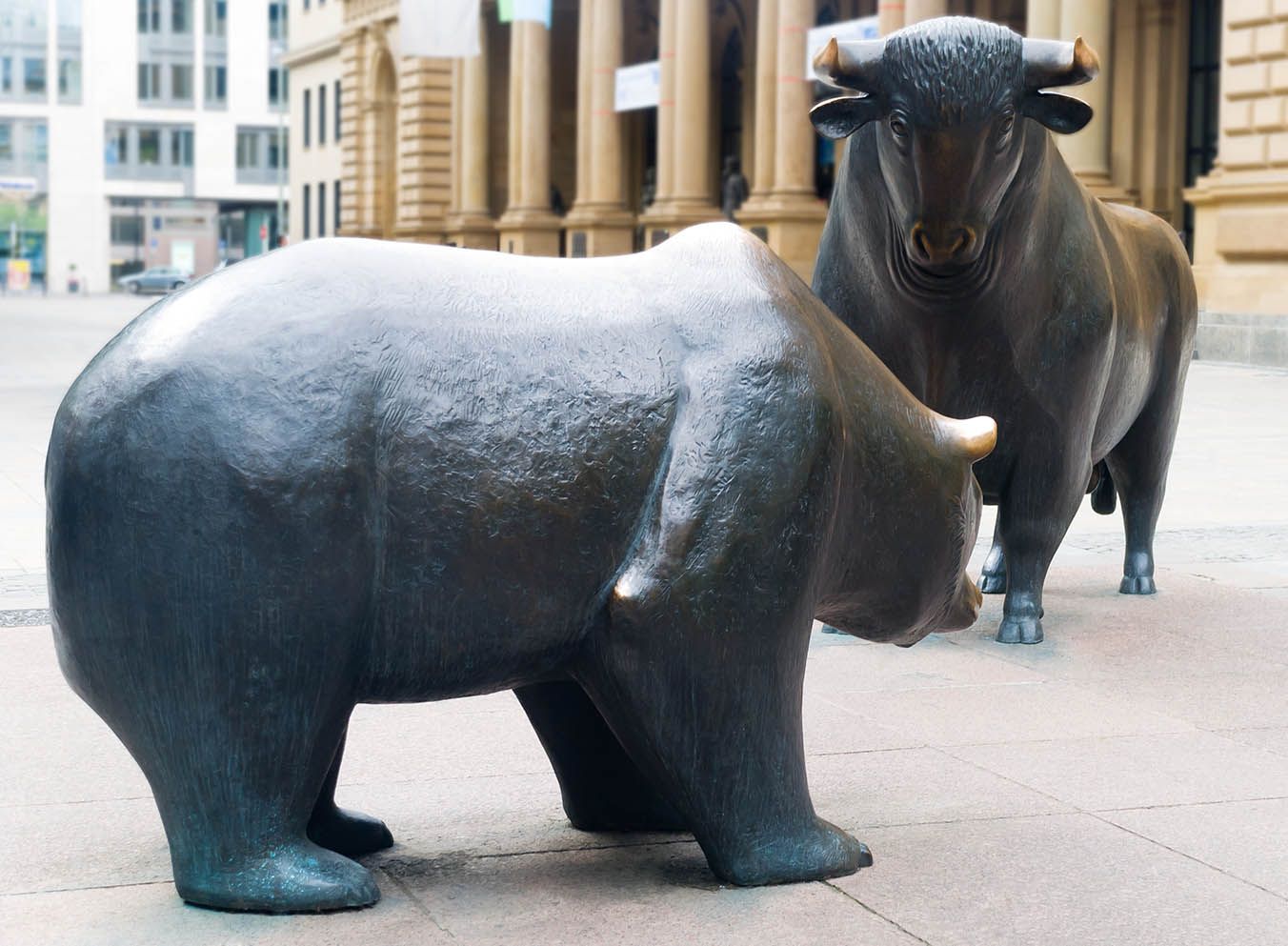 Canada's Dollar was still higher against a majority of its G10 counterparts although the Australian and New Zealand commodity Dollars got the better of it and so too did Sterling despite that the British currency would normally be found trailing all three of the 'high beta' and riskier commodity currencies.

GBP/CAD was edging higher and attempting to break above an important level of technical resistance around 1.7440 owing in part to a USD/CAD rate that was proving resistant to declines while trading just above the 1.27 handle.

"USDCAD continues to reflect a stalling/stalled sell-off and building corrective pressure. The USD put a little more pressure on the 1.26 area last week, where USDCAD has based in the previous two weeks, but we think there are some important technical signals indicating that the USD sell off is prone to a snap back," says Juan Manuel Herrera, a strategist at Scotiabank. "We think a break above clear resistance at 1.7440 should point to a little more GBP strength."

The 1.2760 level is now a key fault line for USD/CAD, a daily close above which could pave the way for a retracement toward somewhere between 1.29 and 1.30, amid signs the technical downtrend has been exhausted. 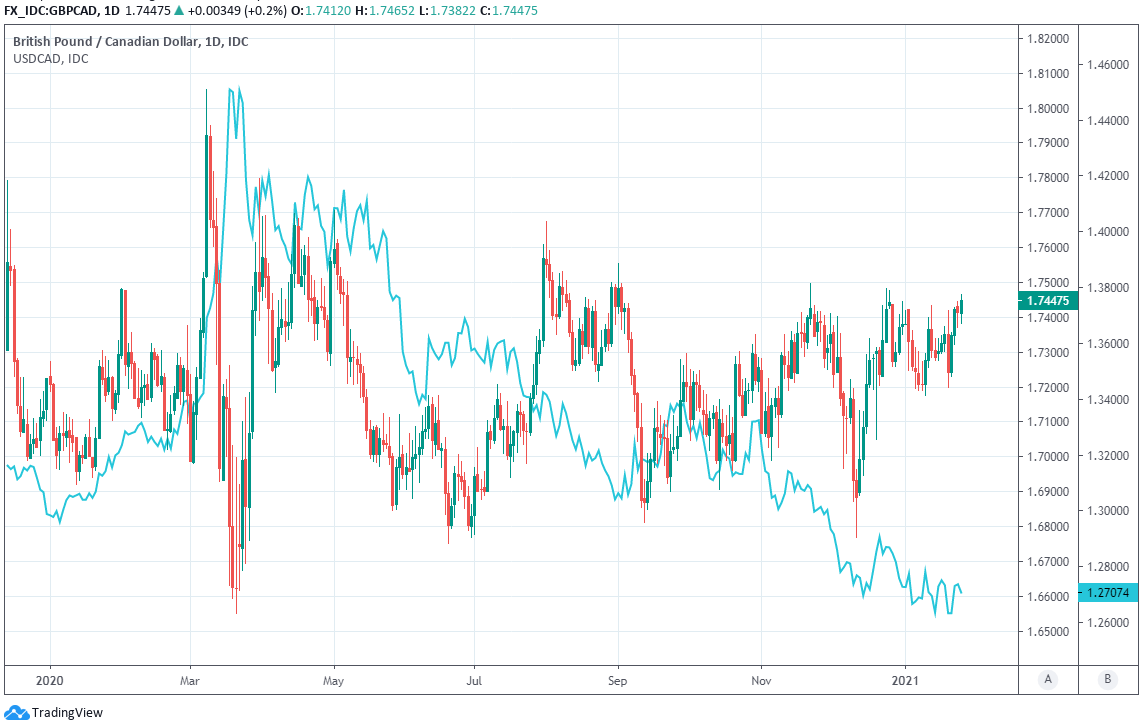 Scotiabank's Herrera flags the recent "descending wedge pattern" on the daily charts alongside a bullish “morning star” candle pattern and hat-trick of doji candles on the weekly charts as all collectively warning of a possible trend reversal working its way through the pipeline.

"Intraday/daily trend strength oscillators are edging somewhat positively for the GBP. However, the signals are hardly compelling at this point and neutral, longer term studies suggest more range trading is likely in order," Herrera says.

Herrera and the Scotiabank team note that any daily close above 1.7440 would be a potentially bullish sign for Sterling but that the 1.75 level is by far the more important threshold and key to a meaningful trend change to the upside. This is after more than a year of range trading mostly between 1.69 and 1.75.

The outlook for Sterling has brightened of late although not by enough to lift GBP/CAD out of the last year's trading range,. Any trend reversal to the upside in USD/CAD would provide an additional tailwind to GBP/CAD, which always closely reflects relative moves in GBP/USD and USD/CAD.

It's not just technical indicators on the charts that are suggesting a USD/CAD turn higher could be in the pipeline, given that 'fair value' as estimated by BMO Capital Markets' rotating-financial-factor-model has also edged higher this week, which could be a harbinger of a turn in the underlying exchange rate.

"The model retains a bias to sell rallies in USDCAD because the 1M trend in fair value has a downward slope. That slope has flattened out, though, as is shown in Figure 1. It looks like the model will retain its bias to sell rallies for at least 3-4 more days, but after that it's hard to say. The bias could potentially flip next week," notes Greg Anderson, global head of FX strategy at BMO. "The model's entire pecking order is shown in Figure 2."

BMO's rotating-financial-factor-model continuously monitors four types of interest rate differential, four different proxies for commodity prices and four separate measures of investor risk appetite. It then combines the variable from each category that is best at predicting one-day-ahead price action over a three-month lookback window to produce a USD/CAD signal. It advocates 'long' positions when prices are below fair value as the fair value level trends higher and vice versa, but has been a seller of USD/CAD lately.

Copper and the U.S. Dollar Index are currently the two foremost influences on USD/CAD's fair value although the bank has observed an unusual phenomenon in that movements in USD/CAD now appear to be driving market pricing of the Bank of Canada cash rate in the overnight-index-swap market rather than pricing driving USD/CAD itself. This could be an indication that the BoC's concerns about strength in Canadian Dollar exchange rates are acting to constrain the Loonie, which would be a potentially bullish development for and influence on the Pound-to-Canadian Dollar rate if it's sustained, one which might make a break above 1.75 more likely.

"Normally a narrowing yield advantage for CAD would lead to CAD weakness. However, what we have seen over the past several months is that USDCAD movements seem to be driving BoC expectations," Anderson says. "The OIS market prices in a higher possibility of a 'micro cut' by the BoC as spot USDCAD approaches 1.2500 and a lower probability of a 'micro cut' as spot approaches 1.2800. With today's apparent consolidation above 1.2700 in USDCAD, 3M CAD OIS moved 1.3 bps higher to 0.193%, which is its highest close since January 4. This moved the [interest rate derivative] more in CAD's favor, which is backwards associated with CAD weakness at present." 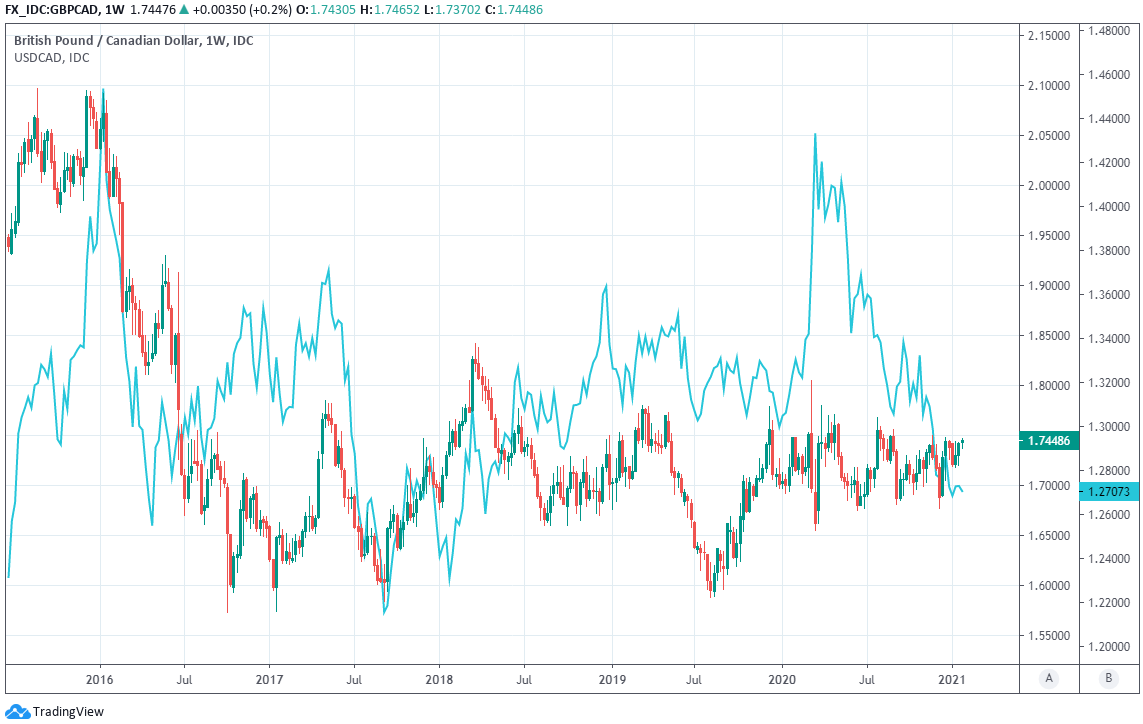