The Pound-to-Australian Dollar rate may be curbing into a short-term consolidation range following a six percent rally thus far in 2021 and now that AUD/USD is showing signs of stabilisation, although the bigger picture may now be one of a longer-term paradigm change in the making.

Pound Sterling and the Australian Dollar could be on the cusp of trading places in a fundamentally significant, medium-to-longer term paradigm change that would see the British currency making a higher-yield offer to the global market than its previously ‘high yield’ antipodean counterpart.

But in the short-term at least a period of consolidation between the 1.8640 and 1.8990 levels could beckon the Pound-to-Australian Dollar exchange rate now that AUD/USD has shown signs it could be minded to indulge analysts and investors who’re calling a bottom for the Aussie.

The Pound-to-Australian Dollar rate always closely reflects relative price action in GBP/USD and AUD/USD, and would likely be curbed into 1.8640-to-1.8990 range if AUD/USD steadies above 0.73 over the coming weeks and GBP/USD is confined to its recent 1.38-to-1.40 trading band.

“We think the Oz has bottomed out and continue to like buying dips as it scores well on our dashboard,” says Mark McCormick, global head of FX strategy at TD Securities, who also said in a note this week “the 0.73 level is likely to mark the range lows for now” in reference to AUD/USD.

“We will look to fade any data-inspired USD strength if the BDXY approaches the 1150 highs. EURUSD longs remain attractive near 1.18, while a hawkish BoE would support the burgeoning GBP rally,” McCormick writes. 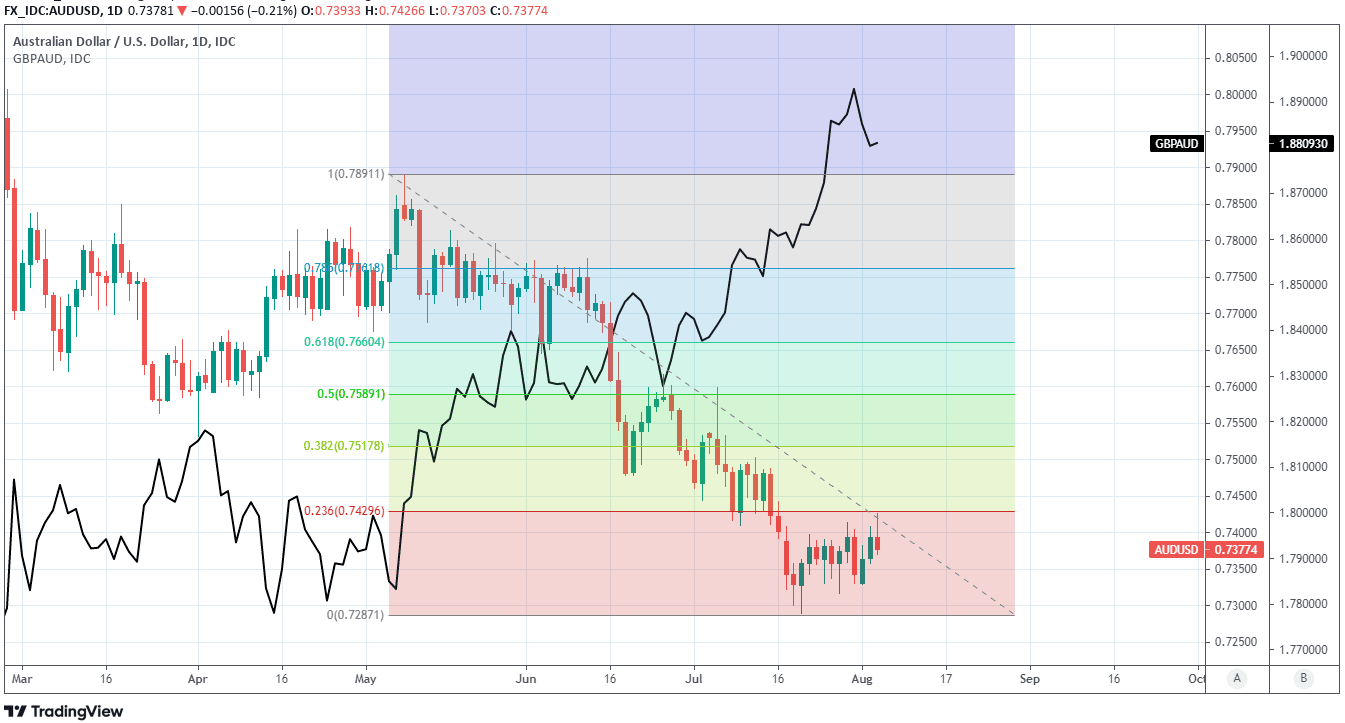 Above: AUD/USD at daily intervals with Fibonacci retracements of May decline indicating possible areas of resistance, alongside GBP/AUD in black.

McCormick and the TD Securities team “look for AUDUSD to close out the year around 0.78” and were encouraged this week when the Reserve Bank of Australia (RBA) stayed July’s newly-chartered course toward a gradual tapering of its roughly A$5BN per week quantitative easing (QE) programme.

The RBA said this week it would continue the QE programme at A$5BN per week until early September and then $4 billion per week until at least mid November thereafter, when many in the market had anticipated that it might scrap those plans due to a resurgence of the coronavirus in Australia.

“The experience to date has been that once virus outbreaks are contained, the economy bounces back quickly. Prior to the current virus outbreaks, the Australian economy had considerable momentum and it is still expected to grow strongly again next year,” the RBA said.

AUD/USD bounced following the RBA’s decision having previously been flirting with a move below 0.7300, although the flurry of demand ebbed by the time the Aussie was back above 0.74 and commentary from Federal Reserve (Fed) Vice Chairman Richard Clarida has since pulled it lower. 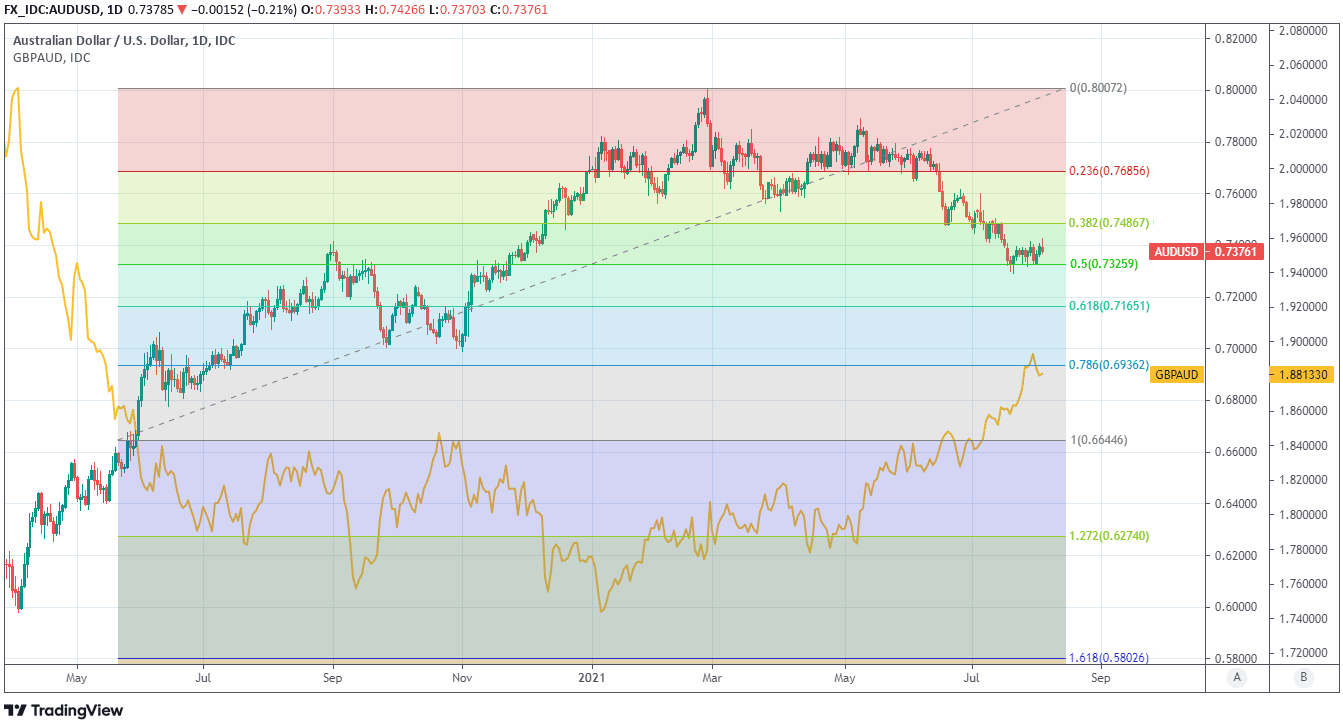 Above: AUD/USD with Fibonacci retracements of June 2020’s extended rally indicating possible areas of support, alongside GBP/AUD in yellow.

“We are clearly a ways away from considering raising interest rates and this is certainly no something on the radar screen right now [but] if the outlook for inflation and outlook for unemployment I summarized earlier turn out to be the actual outcomes for inflation and unemployment realized over the forecast horizon, then I believe that these three necessary conditions for raising the target range for the federal funds rate will have been met by year-end 2022,” Vice Chairman Clarida told the Peterson Institute for International Economics on Wednesday.

The rub for AUD/USD is that current market pricing and recent rhetoric from officials both suggest the Fed is likely to raise its interest rate from zero some time between the end of next year and end of 2023, while RBA forecasts and guidance suggest it won’t follow suit until at least the end of 2023.

Furthermore, and with large parts of Australia’s economy set to remain in ‘lockdown’ for weeks if not months, investors could be discouraged for a while yet from bringing forward their expectations for a cash rate lift off in Australia, which is also potentially a boon for the Pound-Aussie Dollar rate too.

“Last week we saw a couple of tests of key short term moving averages on the topside and daily stochastics are turning up which suggests that the tone is improving and AUD demand may be returning. The RBA surprised by maintaining its taper decision, yet the A$ was only able to trade to a high of 0.7408 - that was surprising to us,” says Richard Franulovich, head of FX strategy at Westpac.

There’s still scope for anything and everything to change and potentially as soon as this Thursday, given a pending announcement from the Bank of England, but as things stood in early August pricing in certain financial markets was suggesting the BoE is also likely to beat the RBA to a rate rise too.

This is significant because if the overnight-index-swap market’s outlook for the RBA’s 0.10% cash rate and BoE’s 0.10% Bank Rate is correct then by the end of 2022, short-term interest rates could be higher in the UK than in Australia and with possibly-significant implications for GBP/AUD.

Already the BoE’s QE programme is scheduled to end entirely with 2021, a point at which the RBA is still scheduled to be buying several billion Dollars of Aussie bonds per week, and the risk remained on Thursday that it manages to lift Bank Rate before the RBA even ends its own QE programme.

“The question for the BOE and sterling is whether Gilt purchases could be phased out before the scheduled date of December. The case to extend QE into 2022 has weakened but uncertainty over how the end of furlough will impact the labour market means the BoE may decide to bide its time,” says Kit Juckes, chief FX strategist at Societe Generale.

Above: Pound-to-Australian Dollar rate shown at weekly intervals with major moving-averages and spread, or difference between, yields on 02-year British government bonds and their Australian government equivalents in yellow.