- Economy still in doldrums despite three rate cuts from RBA.

- ANZ and Westpac stick with calls for another two RBA cuts.

- Says RBA may be forced into quantitative easing next year.

The Australian Dollar cratered on Monday after third-quarter growth figures disappointed an already-downbeat market, leading investors to bet the Reserve Bank of Australia (RBA) cuts its interest rate again next year and inciting the Pound-to-Aussie rate to aim for fresh post-referendum high.

Australia’s economy grew by just 0.4% in the third quarter, down from an upwardly-revised 0.6% previously but below the 0.5% consensus expectation of the market. However, that didn’t prevent the annualised rate of expansion rising from 1.4% to 1.7%, in line with expectations.

“The report shows that weakness in the private sector economy has become more entrenched,” says Felicity Emmett, an economist at ANZ. “Consumer spending was particularly weak, rising just 0.1% q/q despite the fact that around two thirds of the AUD7.2bn tax of cuts look to have been paid out.“

Neither of Australia’s growth figures were really that far off expectations, although the composition of the third-quarter expansion was as much a disappointment for markets as the modest miss against consensus in the quarterly number. In short, the bulk of Australian economic growth came from government spending and overseas demand last quarter, while the domestic side of the economy underperformed. 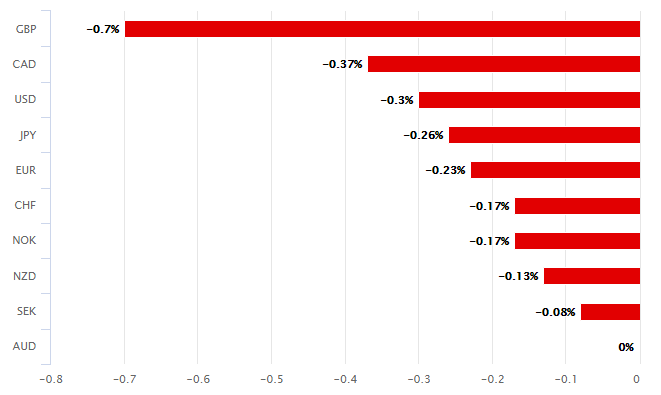 Above: Australian Dollar performance against major rivals on Wednesday.

General government consumption and exports rose by 0.2% respectively last quarter, while growth in household spending was much less and business investment contracted. The household saving rate also rose which, in officialdom, is normally seen as a mark of low confidence in the outlook.

“The 6.8% q/q drop in income tax payments, helped to boost household incomes by 2.5% q/q and 5.1% y/y, the highest annual growth since Q3 2014. But heightened consumer caution has driven households to save most of this,” Emmett says. “The outlook for the economy remains very uncertain. There are few reasons to hope for a short-term recovery given that investment plans have been cut, housing approvals are still trending lower and consumer confidence remains in the doldrums. It seems inevitable that the economy will require further policy stimulus to lift it out of its current funk.”

Markets care about the GDP data because it reflects rising and falling economic demand that has an important role in regulating the inflation that the Reserve Bank of Australia has been coveting with its three 2019 rate cuts.

Slower growth and weaker domestic demand should mean less inflation further down the line, which is an argument for the RBA to do more to meet its 2%-to-3% inflation target. The bank has cut rates this year in the hope of stoking stronger growth and price pressures but gotten little bang for its buck so far. ANZ says the RBA will cut the cash rate twice more in the next year, taking it down from 0.75% to the ‘effective lower bound’ of 0.25%. 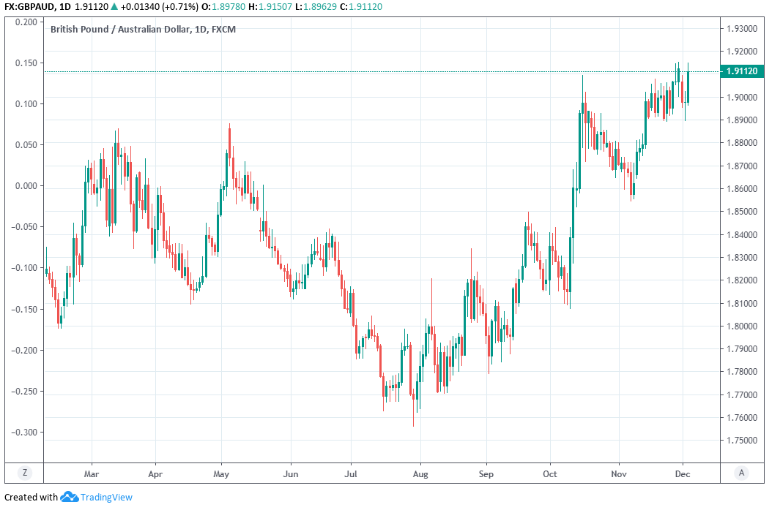 “We have included an additional 25bp cut to the cash rate in our rate track. We now expect cuts in both February and June 2020 - taking the cash rate to 0.25%. At this point, we see an increased risk of a move to ‘unconventional’ policy in H2 2020 should the labour market deteriorate more significantly than we forecast,” says Alan Oster, chief economist at NAB, Australia’s largest bank.

Oster said Wednesday that weak growth in the private sector will lead to higher unemployment and slower wages growth for Austrlians in the year ahead, which is tipped to further entrench the existing weakness in the quarterly inflation numbers. He says that once the RBA has cut the cash rate to 0.25% next June it will have no choice but to begin thinking seriously about a currency-crushing quantitative easing (QE) program.

The RBA said last month that QE is "not on our agenda at this point in time" and that "negative interest rates in Australia are extraordinarily unlikely." The bank cast doubt this week over whether it really would need to go for another rate cut in at its next meeting in February 2020 although the optimism inspired by the December statement was unwinding fast on Wednesday.

“Previous revisions meant the annual rate printed in line with expectations at 1.7%/yr.  There has been a modest increase in the chances of a 25bp February RBA rate cut, as pricing moved from a 56.8% chance to a 59.2% chance.  Australian 10‑year government bond yields have fallen 13bps to 1.06%. The risk is AUD/USD trades lower over the next 24 hours, down to 0.6800,” warns Kim Mundy, a strategist at Commonwealth Bank of Australia. 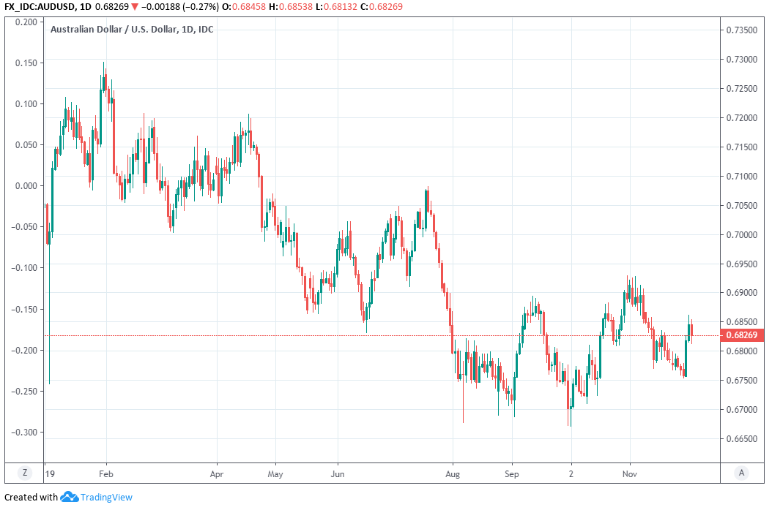 Pricing in the overnight-index-swap market shifted further in favour of a February rate cut heading into the European morning on Wednesday, with the implied cash rate for February 04 declining from 0.58% to 0.57%, although it remains a fraction above the 0.50% level that would prevail in the wake of another cut. And the implied rate for June 02, the date when most local banks see a second 2020 cut to 0.25% being delivered, was just 0.45%. Both of those numbers imply further downside for the Australian Dollar.

“One could argue that the upward revision to 2Q19 GDP makes this a better set of numbers than the headline implies. It certainly suggests that activity has been stronger in the recent past, though it is the sharper downturn in activity in 3Q19 that we think is the more important consideration for the RBA, and which will likely weigh on the AUD,” says Rob Carnell, chief economist and head of research for Asia-Pacific at ING. “We imagine that if the data is looking sufficiently soft to merit a further rate cut, then in all likelihood, it will end up requiring two, so as long as the forthcoming labour data don't change the picture, then we will be looking to reduce our rate outlook to 0.25% by the end of 2Q20, and most likely scaling back our AUD forecasts too.”

Carnell and the ING team say the Aussie is the most undervalued of major currencies but that it would fall by another 5% if the RBA did go ahead with a QE program. However, they forecast the RBA will not cut rates at all next year and that in part because of this, the Aussie will rise back to 0.72 against the U.S. Dollar by the end of 2020. 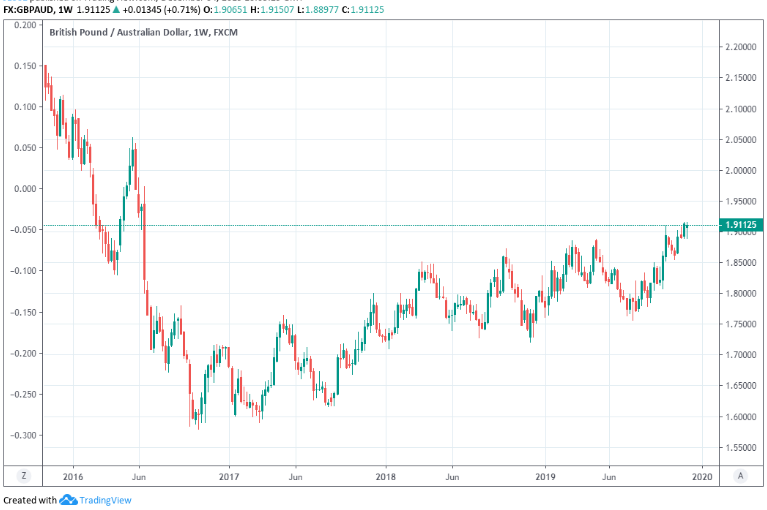 The Pound-to-Aussie rate, meanwhile, is seen rising only as far as 1.91 next year, which is around Wednesday's level.

The Australian Dollar was lower against all of its major rivals early in the morning session Wednesday, with its steepest losses coming against the election-transfixed Pound Sterling. The Pound was higher against all its rivals Wednesday after the GBP/USD rate broke above the key 1.30 level, which was said by some traders to have triggered stop-losses that produced an extended move higher in British exchange rates.

Sterling is now within touching distance of a fresh post-referendum high although the outcome of the December 12 election is key to where the Pound will end the year. Currency markets favour a Conservative government. A part of the bias comes from a desire among investors to negate the threat of a 'no deal' Brexit and also see the economy move on from the current stage of negotiations, which has paralysed the Bank of England and some businesses, while the rest is centred on fears about the opposition.

Readers can get the latest on UK election developments and their implications for the Pound here.