"The Fed is looking for a cooling in the labor market in order to get inflation back to target, and the November employment data didn't deliver much on that front," - CIBC Capital Markets.

Some 263k Americans found their way into work during November while the number of new jobs created in October was revised higher from an estimated 261k to 284k, surprising an economist consensus that had looked for a lesser 200k increase in November and a 197k increase back in October.

This outcome has potentially significant implications for the U.S. interest rate outlook given that Chairman Jerome Powell had said just this Wednesday that "a moderation of labor demand growth will be required" if the Fed is to be confident that inflation will eventually return to the 2% target.

"US hiring alongside other measures of labour market activity such as vacancies and wage growth remain too high for the Fed’s liking," says Hussain Mehdi, a macro and investment strategist at HSBC Asset Management.

"With this in mind and amid broader US economic resilience and sticky core inflation, we think speculation of a Fed pause as soon as the January/February meeting is unjustified," Mehdi said following a review of the data. 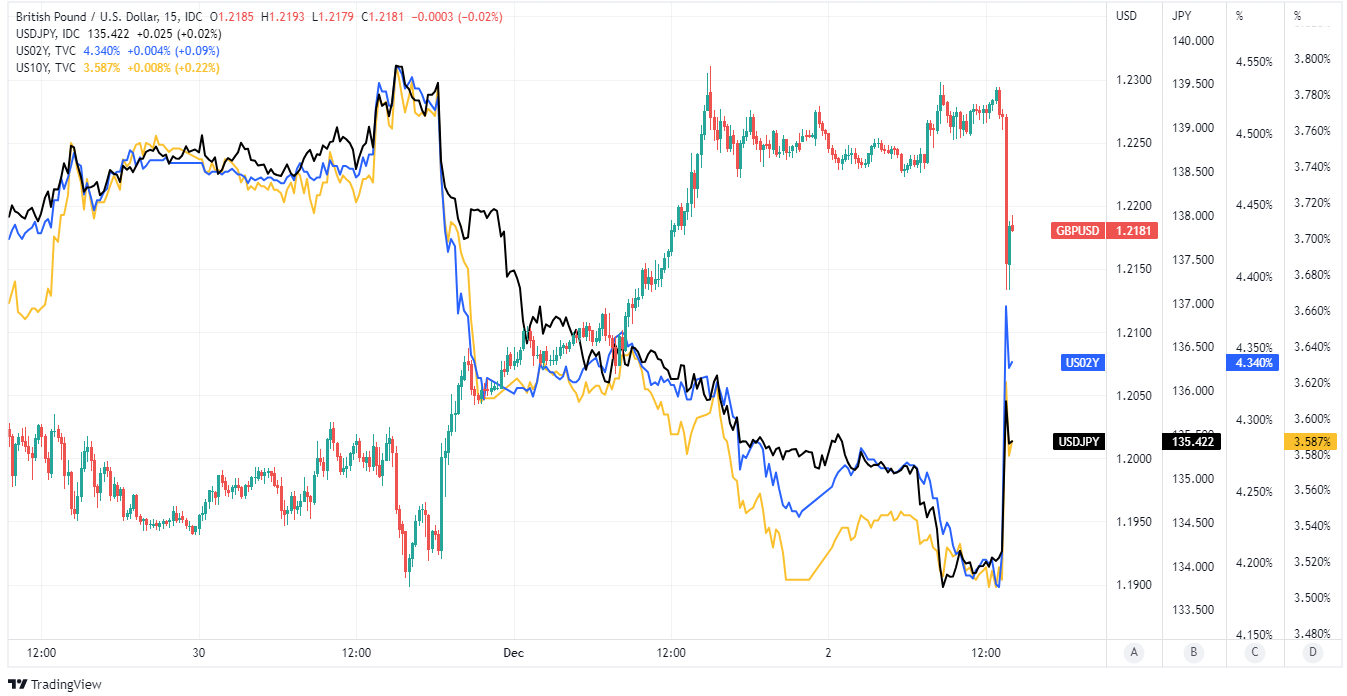 Above: Pound to Dollar rate shown at 15-minutes intervals with USD/JPY as well as 02-year and 10-year U.S. bond yields.

Chairman Powell said earlier this week that strong and ongoing demand for workers has combined with a shrinking supply of labour to drive wage growth rates to levels that could push the Fed's 2% inflation target out of reach and beyond view for an extended period of time.

"The Fed is looking for a cooling in the labor market in order to get inflation back to target, and the November employment data didn't deliver much on that front," says Katherine Judge, an economist at CIBC Capital Markets.

"There were a couple of pockets of weakness in the report, as the household survey showed a decline in employment for the second month in a row, but when combined with a drop in the participation rate, the unemployment rate was unchanged at 3.7%," Judge writes in a note to clients on Friday.

The demand and supply mismatch appeared to be evidenced again on Friday when the Bureau of Labor Statistics said wages rose by 0.6% in November, up from an upwardly-revised 0.5% and above the 0.3% economist consensus.

Annual pay growth was 5.1% in November, up from 4.9% previously, and a level that is marginally higher than the Core Personal Consumption Expenditures (Core PCE) Price Index inflation rate announced for October just this Thursday. 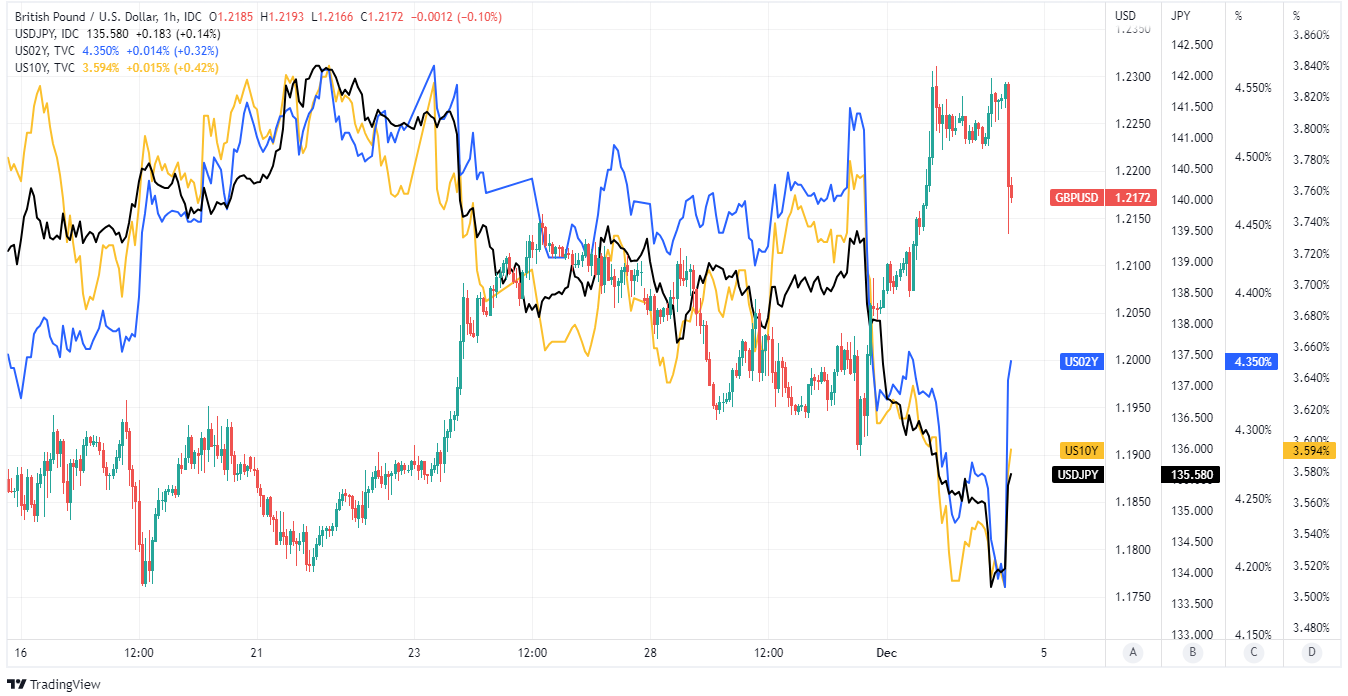 Above: GBP/USD shown at hourly intervals with USD/JPY as well as 02-year and 10-year U.S. bond yields. Click image for closer inspection. If you are looking to protect or boost your international payment budget you could consider securing today's rate for use in the future, or set an order for your ideal rate when it is achieved, more information can be found here.

"This spending category covers a wide range of services from health care and education to haircuts and hospitality. This is the largest of our three categories, constituting more than half of the core PCE index," Chairman Powell said of the "core services other than housing" category on Wednesday.

"Thus, this may be the most important category for understanding the future evolution of core inflation. Because wages make up the largest cost in delivering these services, the labor market holds the key to understanding inflation in this category," he told the Hutchins Center on Fiscal and Monetary Policy.

Minutes of November's Fed policy meeting suggested that most Federal Open Market Committee members were content last month to stand behind September's FOMC forecasts suggesting interest rates could rise as far as 4.75% in the months ahead, from 4% in November.

October's ebb in U.S. inflation appeared to vindicate that bias but Chairman Powell was already of the view last month that U.S. data had argued in favour of even higher rates and this Friday's job numbers were to the Fed Chair's advantage rather than the November majority on the FOMC. 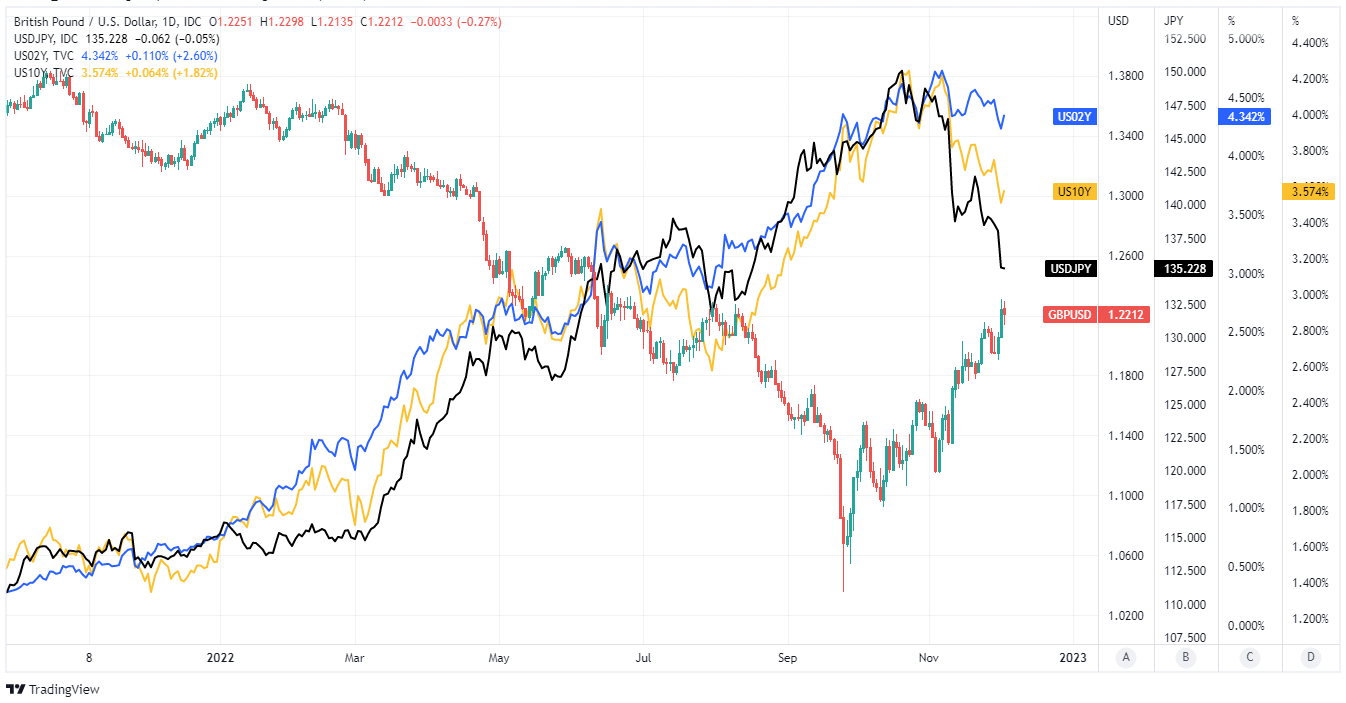 Above: Pound to Dollar rate shown at daily intervals with USD/JPY as well as 02-year and 10-year U.S. bond yields. To optimise the timing of international payments you could consider setting a free FX rate alert here.