The Pound to Dollar exchange rate has been on a rollercoaster ride of late but could find itself better supported if there is a determined attempt by the Peoples' Bank of China (PBoC) to stabilise the Renminbi in the Golden Week holiday and lead up to a key mid-October political event for China.

Sterling tumbled to all-time lows against the Dollar and other currencies last Monday in price action that almost all observers initially connected to the prior Friday's budget announcement from Chancellor Kwasi Kwarteng.

But there is reason to believe that Monday madness was little more than an interaction between speculative bets against the Renminbi and inadequate Sterling liquidity in Asia trading hours, while it is notable that the Poundended last week higher against all G10 currencies.

"During yet another tumultuous week in financial markets, the dollar has dropped back over the past couple of days after intervention by the BoE (in the gilt market) and the PBOC (in the renminbi) provided a degree of relief across equity, bond, and currency markets," writes Jonas Goltermann, a senior markets economist at Capital Economics, in a Friday market commentary.

"The greenback’s rally looks increasingly stretched and we think there is scope for further consolidation. But with Fed officials continuing to bang their hawkish drum, the key underlying driver of the dollar’s strength remains intact and the risk of a continued self-reinforcing dollar melt-up is high," he added. 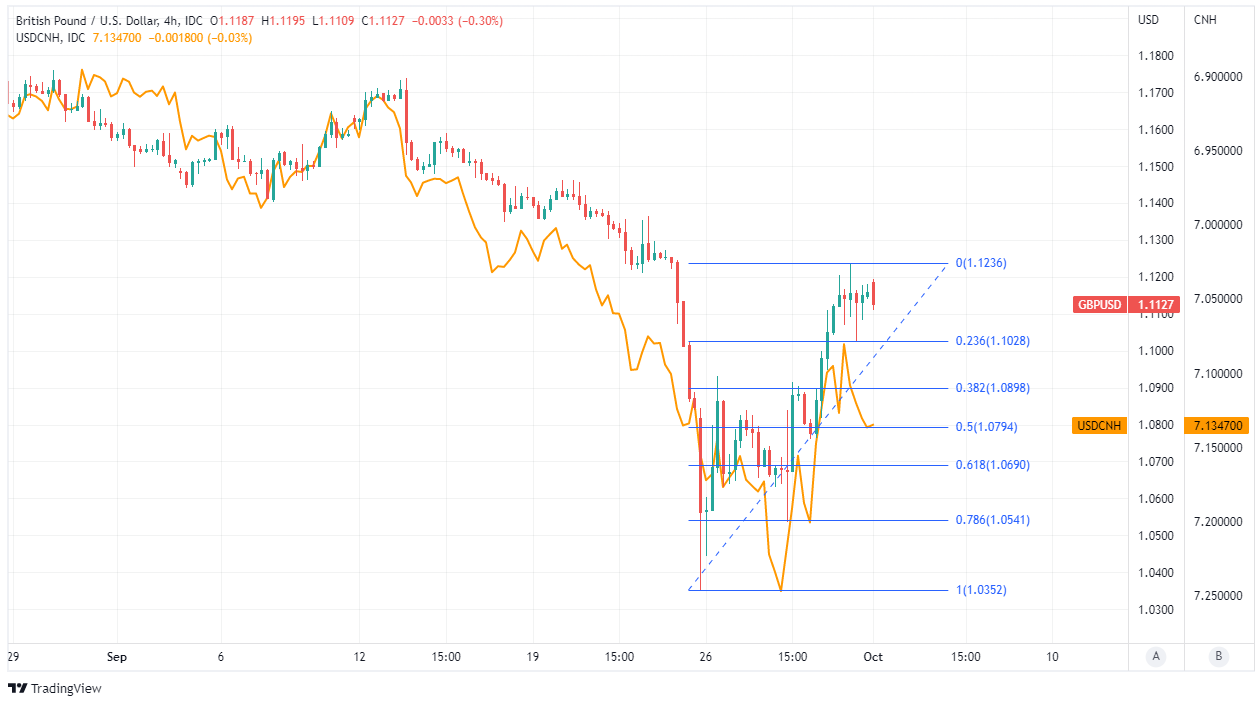 Above: Pound to Dollar rate at 4-hour intervals with Fibonacci retracements of last week's recovery indicating prospective areas of technical support and shown alongside upside down Dollar-Renminbi rate. Click image for closer inspection.

While many saw the GBP/USD recovery throughout last week as being the result of a Wednesday intervention in the British government bond market from the Bank of England (BoE), most may well have underappreciated the significance of currency market intervention by the Peoples' Bank of China.

Indeed, this must-read report from Reuters means that one being a symptom of the other cannot be ruled with the agency citing four sources on Thursday for reporting that state-owned banks in China had been instructed to prepare to sell Dollars in the offshore market to support the Renminbi.

Meanwhile, data from two of the world's largest interbank currency trading platforms has suggested that Reuters' Thursday report did not emerge until at least a day or more after the preparations for direct intervention had already begun, while it is further notable that the Dollar Index did then fall on Thursday and Friday last week.

"The commentary out of China was well received by market participants who were searching for the line of sand. The USDCNH came off from the high of 7.25," says Tommy Xie, head of Greater China research at OCBC Bank.

"As market always said “don’t fight the Fed”, fighting PBoC is also a tough job. As such, we think market will take a cautious tone during this golden week holiday in the absence of China market," Xie wrote in Monday research. 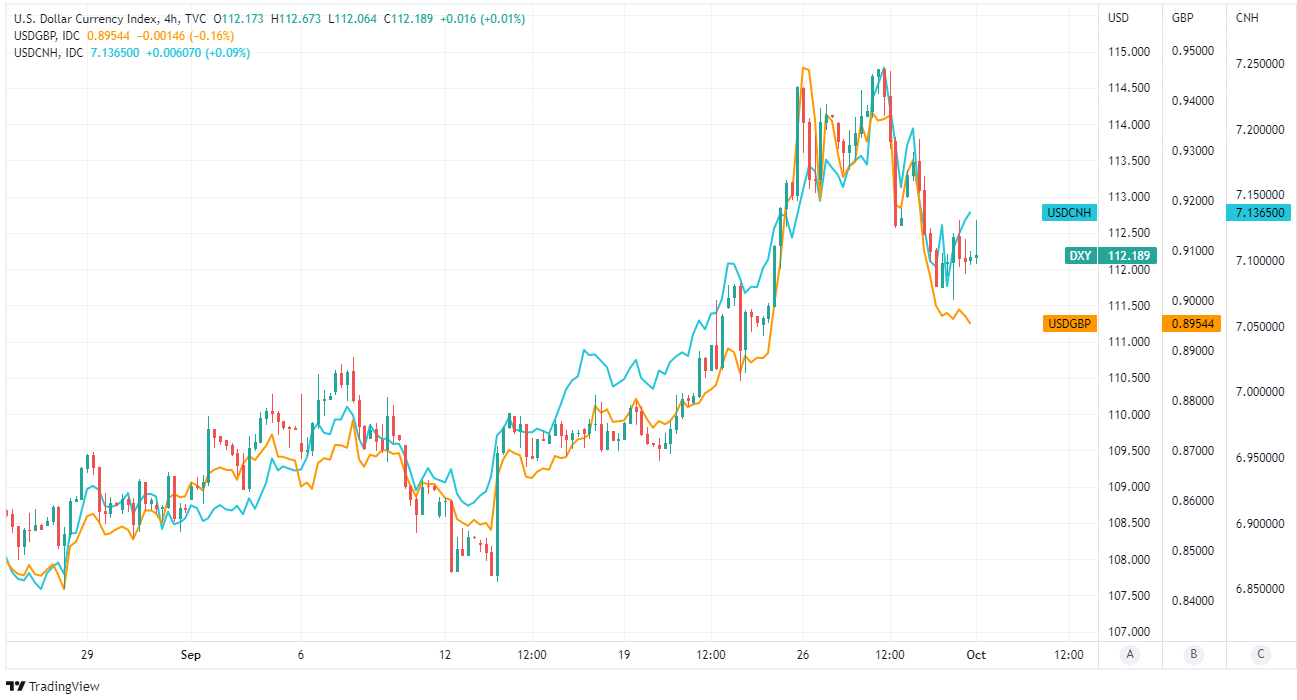 While others will have their own ideas, it's possible some will underappreciate the extent to which the PBoC may want stability in the Renminbi complex during the current Golden Week holiday and ahead of the 20th National Congress of the Chinese Communist Party (CCP) on October 16.

That would have potentially significant implications for price action throughout the U.S. Dollar complex because the objective within the managed-floating Renminbi system is to keep the Chinese currency "basically stable" in relation to the different parts of the China Foreign Exchange Trade System (CFETS) index.

In such a scenario it might be relevant that China dominates the upper echelon of the international league table when banks are listed according to the size of their balance sheets while the PBoC itself wields the world's largest chest of FX reserves that were valued at a little over $3 trillion in August.

That means authorities in Beijing would have more than adequate resources to support the Renminbi, although doing this may not be quite as difficult as many may imagine when the speculative market has the chips that it does already stacked on top of the Dollar.

"We think the authorities will refrain from excessive intervention and let the market determine the fair value of yuan but will still signal discomfort towards rapid depreciation," says Paul Robson, EMEA head of G10 FX strategy at Natwest Markets. 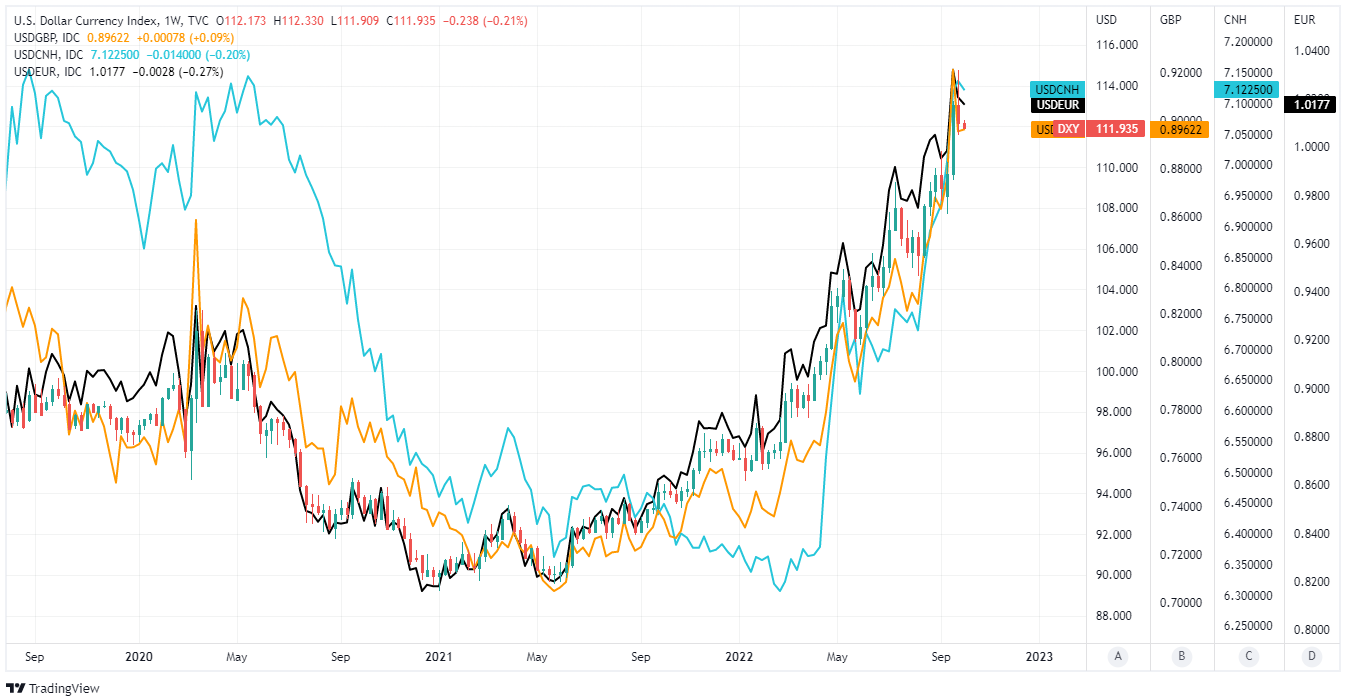 "As the Golden Week holiday looms and the onshore market is scheduled to close for next week, we expect USDCNH to follow the dollar moves without the daily CNY fix as an anchor," Robson and colleagues said on Friday.

Last week's reported intervention preparation is one candidate explanation for why the Dollar Index fell on Friday and many U.S. exchange rates also softened despite the August edition of the Core PCE Price Index having surprised on the upside of consensus expectations in both monthly as well as annualised terms.

That is the Federal Reserve's (Fed) preferred measure of U.S. inflation and its release came against a backdrop of yet more hawkish monetary policy commentary from members of the Federal Open Market Committee (FOMC) or interest rate setters.

None of that bodes well for the U.S. Dollar during the week ahead when economists will be looking to the September editions of the Institute for Supply Management (ISM) surveys of the manufacturing and services sectors as well as last month's non-farm payrolls report for clues about the economic outlook.

These are interspersed with a large number of FOMC members who're also scheduled to speak publicly about various topics over the coming days.

The author's bet is that all of this means the Pound to Dollar exchange rate is likely to find itself well supported above roughly the 1.09 level and that it could well have scope to edge back above 1.12 at times in the days ahead, although it remains to be seen just how far above that level Sterling would be able to climb. 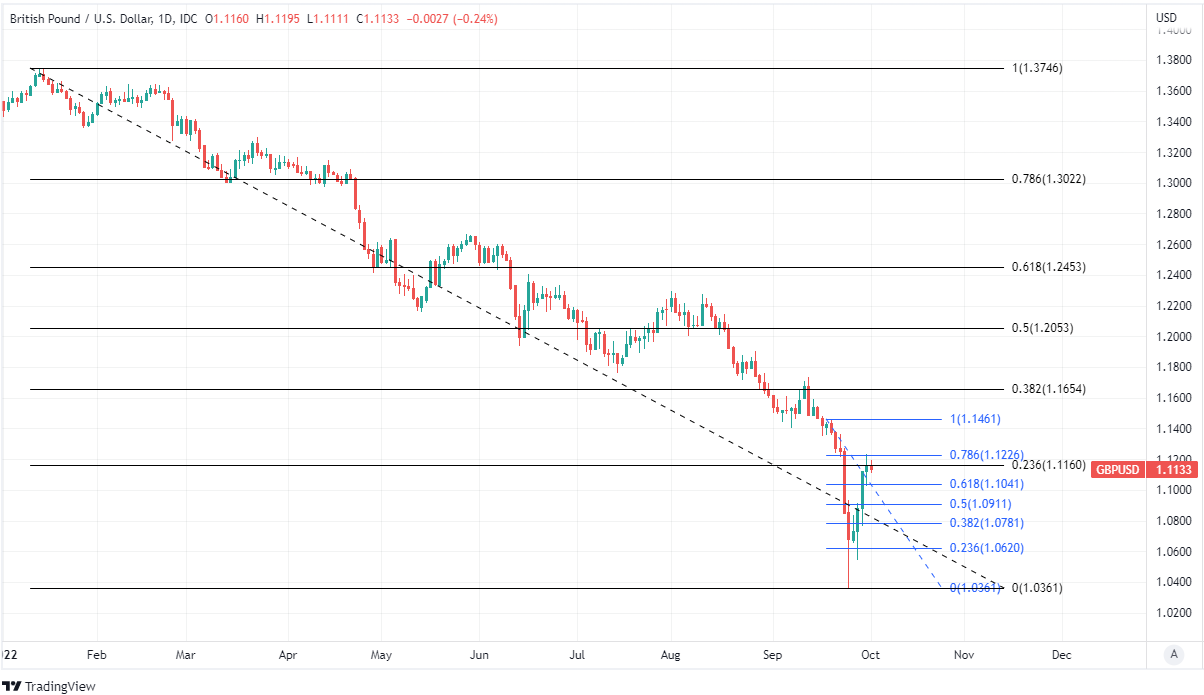 Above: Pound to Dollar rate at daily intervals with Fibonacci retracements of last week's fall and 2022 fall indicating prospective areas of technical resistance for Sterling. Click image for closer inspection.