"Unless we get a reasonably significant downside surprise on non-tradables (and a turnaround in at core inflation measures), it’s not clear the RBNZ will feel they have the flexibility to ease back on the aggressive pace of OCR hikes anytime soon" - ANZ Research 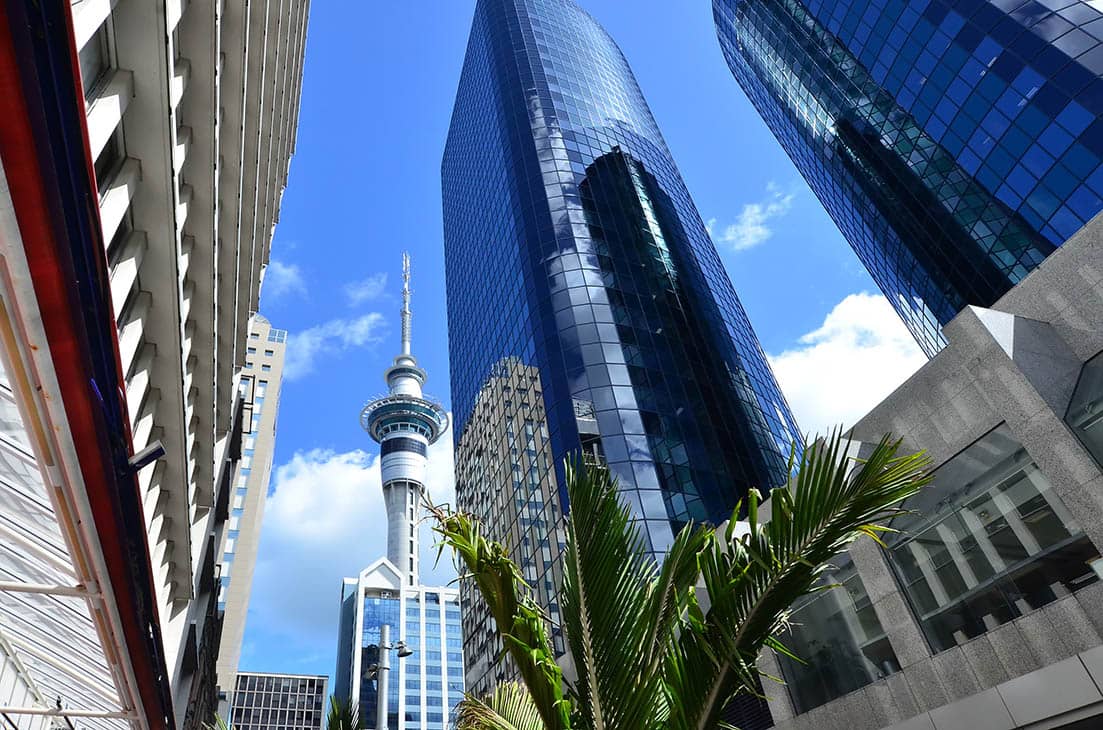 New Zealand's Dollar rose against most major counterparts on Tuesday to solidify its grip on one of the top spots in the G20 rankings for the recent week while pushing the Pound to Kiwi pair to its lowest level since late September.

Tuesday's outperformance comes ahead of the release of inflation figures for the final quarter, which is expected to show price pressures moderating faster than anticipated by Reserve Bank of New Zealand (RBNZ), and at a point when the Kiwi economy is thought to be slowing abruptly.

"Leading economic indicators are now looking quite sickly, and point to the risk that economic momentum will slide further and faster than the RBNZ is intending," writes Sharon Zollner, chief economist at ANZ. 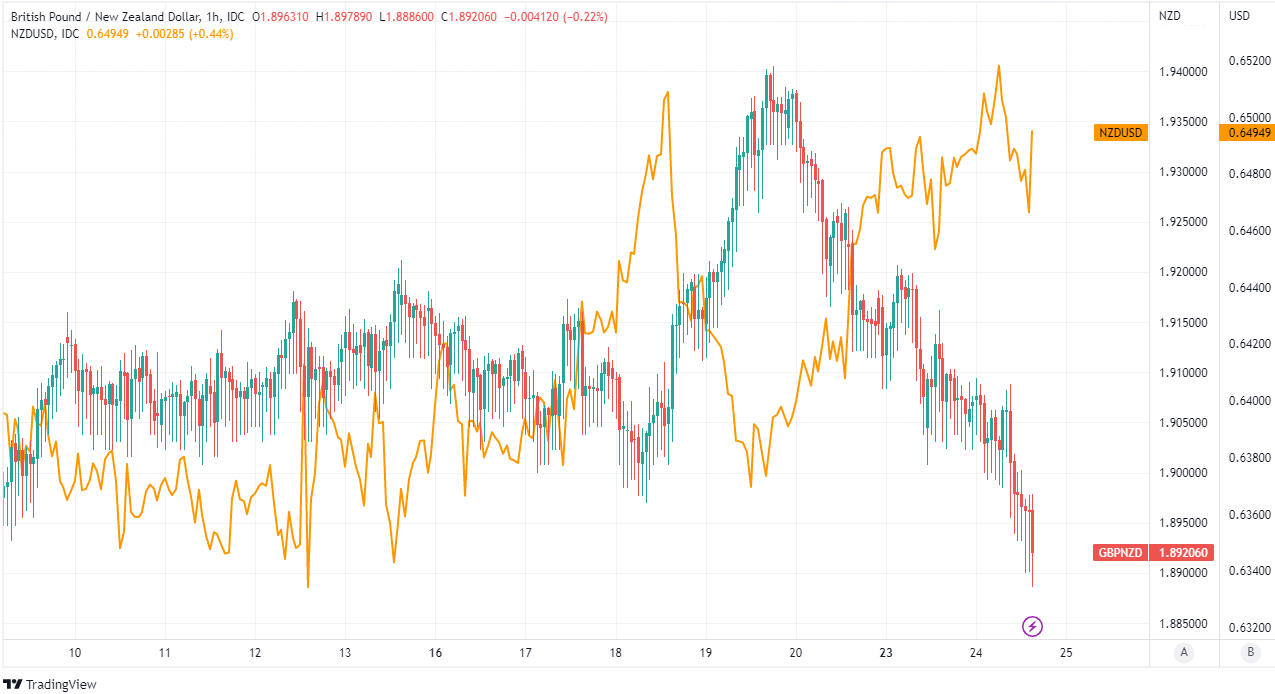 "Unfortunately, timely indicators also point towards domestic inflation continuing to worsen over the summer, putting the RBNZ in a tough spot," she adds.

Zollner and colleagues cite the RBNZ's latest Quarterly Survey of Business Opinion (QSBO) for thinking elevated production costs are likely to see companies continue raising prices in the months ahead.

Europe's Tuesday evening marks the release of inflation figures for the final quarter, however, and consensus suggests price pressures are likely to have moderated faster than the RBNZ banked on when producing its latest economic forecasts back in November.

Inflation is expected to have fallen from 2.2% to 1.3% over the last three months while the annual pace of price growth is seen ticking lower from 7.2% to 7.1% but it's not clear if this would alter the RBNZ's hawkish interest rate outlook. 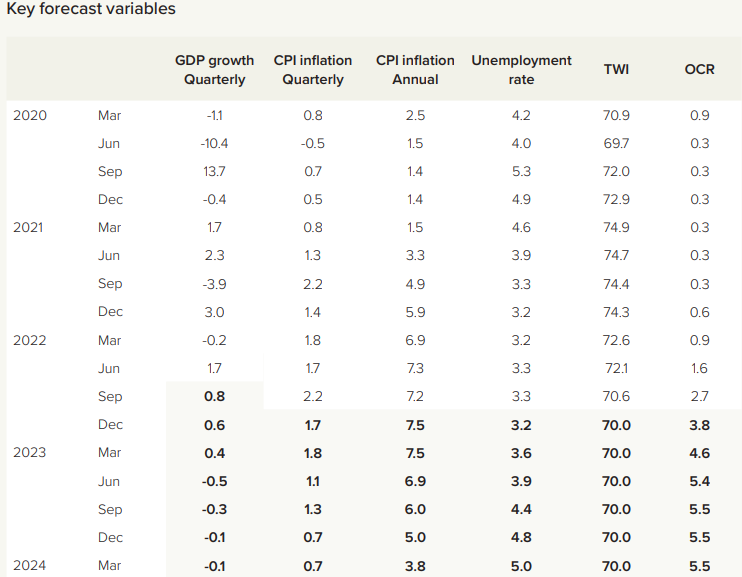 "New Zealand markets are pricing the RBNZ OCR to be 65bp higher at the next meeting on 22 February and to peak at 5.46% in July 2023," says Imre Speizer, head of NZ strategy at Westpac.

November's forecasts suggested New Zealand's cash rate could be expected to rise from 3.5% at the time to 5.5% this year and any data advocating in favour of that kind of an trajectory would do little to help keep GBP/NZD afloat this week.

The Pound to New Zealand Dollar rate was testing some of its lowest levels since late September on Tuesday after S&P Global PMI surveys warned of a deepening contraction in the UK's breadwinning services sector for December.

"S&P’s survey appears to be broadly consistent with our forecast that GDP will fall by 0.3% quarter-on-quarter in Q1 and by a further 0.6% in Q2," says Samuel Tombs, chief UK economist at Pantheon Macroeconomics. 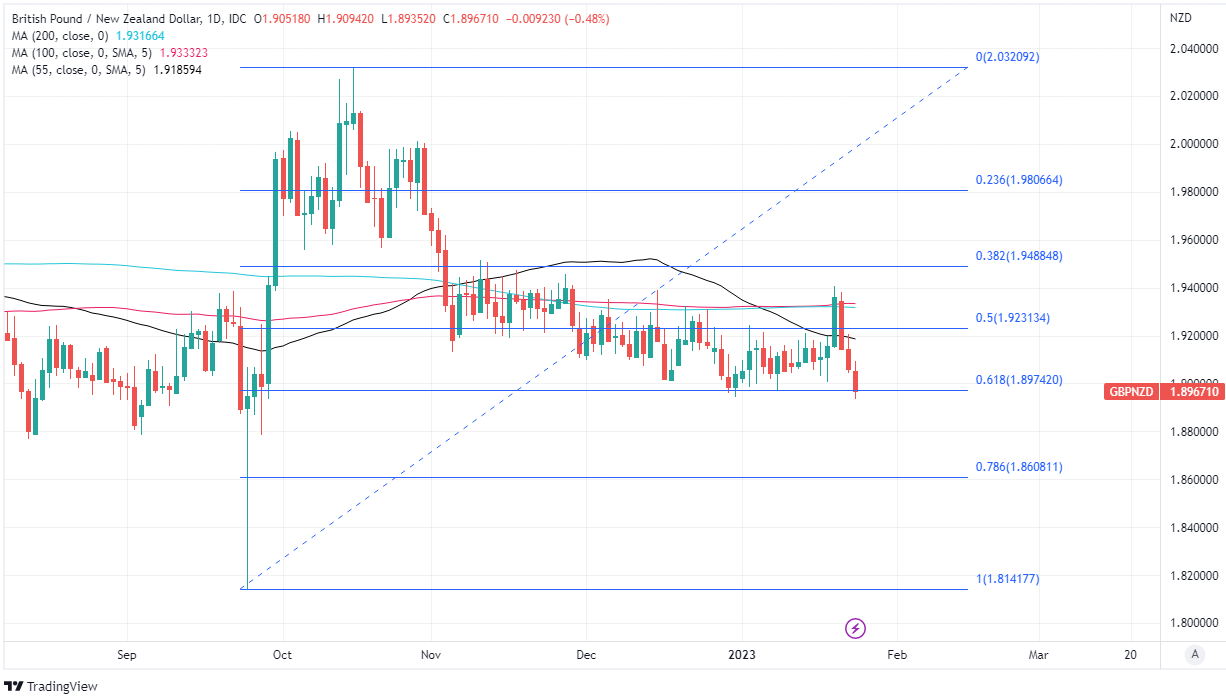 Above: Pound to New Zealand Dollar rate shown at daily intervals with Fibonacci retracements of September recovery indicating possible technical support levels for Sterling while selected moving averages denote prospective resistance. If you are looking to protect or boost your international payment budget you could consider securing today's rate for use in the future, or set an order for your ideal rate when it is achieved, more information can be found here.

"The silver lining to S&P’s survey, however, is that it strengthens the case for the MPC to stop hiking Bank Rate soon," Tombs adds.

Tuesday's PMI surveys mounted a strong rebuttal to green shoots of optimism that had sprung up after Office for National Statistics figures suggested earlier in January that a contraction may have been avoided and a recession dodged by the UK economy in the final quarter.

The resulting losses for Sterling have partially unwound gains made during last week's outperformance while leaving it vulnerable to further losses up ahead.

"We expect that non-tradables inflation increasedagain to 6.9% y/y in Q4, up from Q3’s already record high of 6.6% (the RBNZ ispicking7.0%). Core inflation measures may have continued to increase as well," Zollner says of Kiwi inflation figures set for release on Wednesday.

"So unless we get a reasonably significant downside surprise on non-tradables (and a turnaround in at core inflation measures), it’s not clear the RBNZ will feel they have the flexibility to ease back on the aggressive pace of OCR hikes anytime soon," she adds.