Mid-week sees Sterling looking to hold the advantage around 1.9431; consolidation around these levels would likely keep the short-term bull trend intact and pave the way for the first consecutive weekly advance in the exchange rate since before the onset of the coronacrisis.

Aiding GBP/NZD higher is a sturdier Sterling, with the currency proving to be the best performing major of the past 24 hours after it recorded gains against all ten of the world's largest freely-traded currencies.

As we note in today's headline piece, there is no single trigger to Pound Sterling's recent outperformance, rather there is a combination of factors at play, including better-than-expected domestic data, gradually improving sentiment regarding Brexit trade negotiations and setbacks to the likes of the Dollar and Euro.

The New Zealand Dollar is meanwhile unable to appreciate in value owing to an unhelpful global environment that sees stock markets struggling to find their feet as the global covid-19 case rate continues to march ever higher.

The U.S. case load continues to grow, even though the rate of increase is flattening, and there are genuine concerns that a number of EU countries are seeing second waves emerging.

While New Zealand itself has largely killed the virus, the performance of the New Zealand Dollar reminds us that this is a currency that remains highly sensitive to the global picture. Therefore, the outlook for GBP/NZD could well reside with whether the global economic recovery restarts or whether we are heading into another downward correction in financial markets. 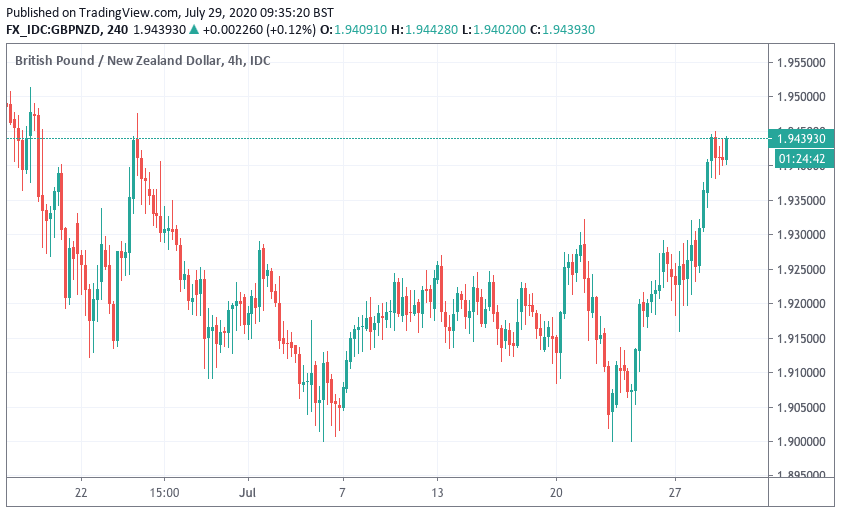 The overwhelming sense amongst the economist community remains that the kind of serious national shutdowns of the March, April and May period are unlikely to be repeated with governments instead opting for targeted local reactions.

As such, another market meltdown is unlikely, but the path forward will nevertheless be bumpy and pose challenges to the New Zealand Dollar.

"A strong recovery for the NZD off lows in mid-March has reached a point of consolidation," says analyst Patrick Bennett at CIBC Capital Markets. "NZD gains have owed to lifts in broad global risk appetite underpinned by policy support, and a weaker USD environment. But unlike the AUD, NZD has had less support from the still cautious RBNZ."

The Reserve Bank of New Zealand (RBNZ) has pursued an aggressive policy of easing in order to support the New Zealand economy, and the purchasing of government bonds under their quantitative easing programme has increased the supply of Kiwi dollars into the market, which has put some pressure on the currency.

While no further major expansion of monetary policy by the RBNZ is expected it still remains in an accommodative mode amidst signs the economy is operating well below capacity, a stance which should act to keep a lid on any bouts of strength in the currency for the foreseeable future.

"The economic recovery is in its early stage, but is complicated by the closure of borders and removal of income from tourism and education," says Bennet. "Like Australia, and elsewhere, domestic tourism is on the rise, but cannot fully bridge the gap. Reports of businesses closing and unemployment set to remain high for some time underline economic challenges."

The economy has opened up to pre-pandemic levels owing to the virtual eradication of the virus, but with external borders closed the significant foreign exchange earners of tourism and international student arrivals will act as a considerable drag for the foreseeable future.