The Pound-to-New Zealand Dollar exchange rate is being tipped as a 'buy' target for foreign exchange speculators to target over the short-term, which we see as encapsulating the coming week.

The Pound is tipped to advance on the New Zealand Dollar by technical analysts at Auto Chartist, a specialist technical analysis provider, who note that the UK currency is trending higher towards a tough level of resistance where it might be expected to stall.

Resistance levels are places in the market where a currency has shown it struggles to advance beyond, and for the GBP/NZD exchange rate the level to watch is resistance located at 2.0264.

Analysts are looking to exit any bets on GBP/NZD upside should this target be reached, as there is a good chance strength would fade when resistance is encountered. 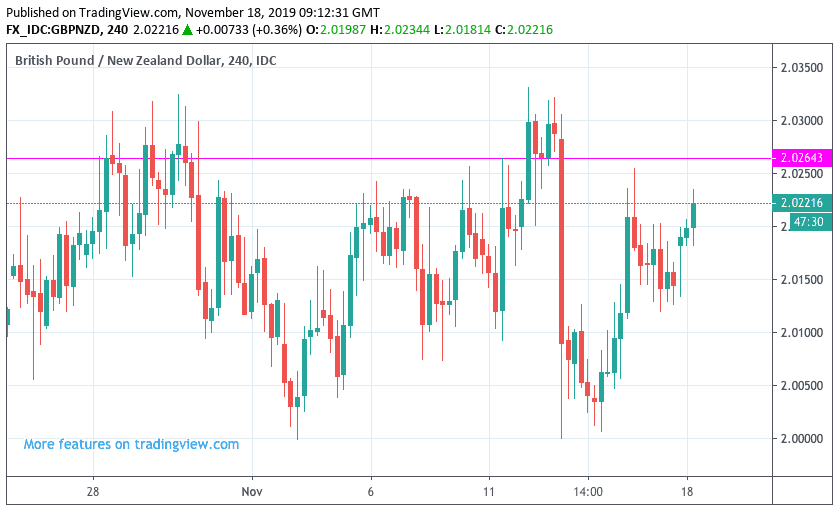 The GBP/NZD exchange rate trades at 2.0217 at the time of writing on Wednesday, a quarter of a percent higher than where it closed the previous week.

The New Zealand Dollar was actually one of the better performing major currencies last week, thanks to the strong buying interest stoked by the Reserve Bank of New Zealand's decision to keep interest rates unchanged.

Ahead of the RBNZ's mid-week decision, there had been a growing expectation in markets, and amongst analysts, that the RBNZ was due to cut the basic interest rate in New Zealand from 1.0% to 0.75%. However, it appears that the market and analysts have been found guilty of talking themselves into believing such an outcome was set in stone.

"Markets were shocked, but we are less surprised," says Dominick Stephens, an analyst with Westpac. "But we recognised that it would be a close call."

The RBNZ appears intent to keep an eye on the evolution of New Zealand's economic data before cutting interest rates again, however most analysts suggest the RBNZ is overestimating the economy's strength.

There is a belief that 2020 will see further interest rate cuts, which would likely lead to further New Zealand Dollar weakness over coming months.

Analysts at ASB in Aukland say the RBNZ’s growth outlook remains on the optimistic side, and it has yet to factor in the economic impact of its looming bank capital increases.

ASB had been expecting an interest rate cut, and are still expect the RBNZ will eventually need to cut the OCR twice further in 2020, and still expect a 0.5% low.

"Moreover, the RBNZ has yet to factor in the economic impact of its impending bank capital increases, for which we expect a bigger economic impact than the RBNZ," says Nick Tuffley, Chief Economist at ASB.

It’s a quieter week ahead for the New Zealand Dollar, from a domestic perspective.

The only data of note is the GlobalDairyTrade auction early on Wednesday morning.

"Prices have firmed further in the past fortnight and this upward trend is expected to stick around for a few months due to global milk supply being relatively tight at present," says Sharon Zollner, Chief Economist with ANZ.

From a global perspective, investor sentiment related to U.S.-China trade negotiations are likely to be a key driver of the NZ Dollar, as they have been for some time now.

The New Zealand and Australian Dollars tend to head higher on positive headlines surrounding negotiations, and fall when headlines suggest a deal is slipping further away.

"Improving mood music surrounding U.S.-China trade matters breathed life into risk appetite. White House's Kudlow suggested that the U.S. & China are very close to striking their phase-one deal, with negotiators being in touch on a daily basis," says a note from analysts at Eurex Exchange.

However, analysts at Lloyds Bank say today that the AUD and NZD ignored the most recent set of positive trade headlines, and they therefore wonder if they have the potential to significantly shift the dial on these two currencies in the short-term.

It appears that the prospect of a phase 1 deal being struck before year-end is a base-case expectation held by markets, it is therefore arguable that it is 'in the price' of the New Zealand and Australian Dollars.

It would therefore make sense that headlines are starting to have less impact on these two currencies.

That said, the risks are now to the downside: if there is an unexpected deterioration in negotiations then markets might have to rapidly reprice expectations, and this would likely weigh heavily on the New Zealand and Australian Dollars.

The New Zealand Dollar outperformed all major rivals including Pound Sterling on Thursday and if recent developments at the two respective central banks are anything to go by, it could continue getting the better of its British counterpart for a while yet.

New Zealand Dollar forecasts for have been lifted at MUFG for 2020 after Kiwi rose by a near-double digit percentage in the final quarter of last year, although analysts at some other firms have told clients the antipodean unit is at risk of a downward correction in the weeks ahead.

The New Zealand Dollar was on its back foot Thursday but is being tipped to rise against the U.S. Dollar in the months ahead as the global growth outlook stabilises and an uptick in the Kiwi economy enables the Reserve Bank of New Zealand (RBNZ) to avoid further interest rate cuts in the first half of 2020.

There is a distinct possibility that GBP/NZD does in fact go lower as foreign exchange markets engage in 'buy the rumour, sell the fact' behaviour on the election result.