The British Pound looked set to enter month-end on a firmer footing, recording gains against the Euro, Dollar and most other currencies over the course of the past week.

The recovery from the significant lows reached on Monday will be helped by data showing the UK economy grew in the second quarter, defying expectations for a decline.

Further data out Friday showed the country's current account deficit was smaller than expected in the second quarter.

The ONS said second quarter GDP expanded 0.2% following a revision of the first estimate which read at -0.1%.

The current account deficit stood at -£33BN (5.3% of GDP), still large, but below consensus expectations for -£44BN.

In fact, the deficit has shrunk markedly on the first quarter, which stood at a blowout -£51.7BN.

This current account deficit requires the UK to attract foreign capital to fund the Pound, but the size of that requirement is materially less than it has been.

However, the Pound has not yet fully recovered against the Dollar and Euro.

The Pound to Euro exchange rate has risen 1.46% - from open to current levels - this week, but was as low as 1.0799 on Monday. The pair is at 1.1370 at time of writing, with bank payment rates at approximately 1.1142 and payment rates at independent providers around 1.1335, more information here.

The Pound to Dollar exchange rate has risen 2.85% this week, but had been as low as 1.0354 on Monday. Spot is currently at 1.1158, with bank payment rates at approximately 1.1142 and payment rates at independent providers around 1.1335, more information here. 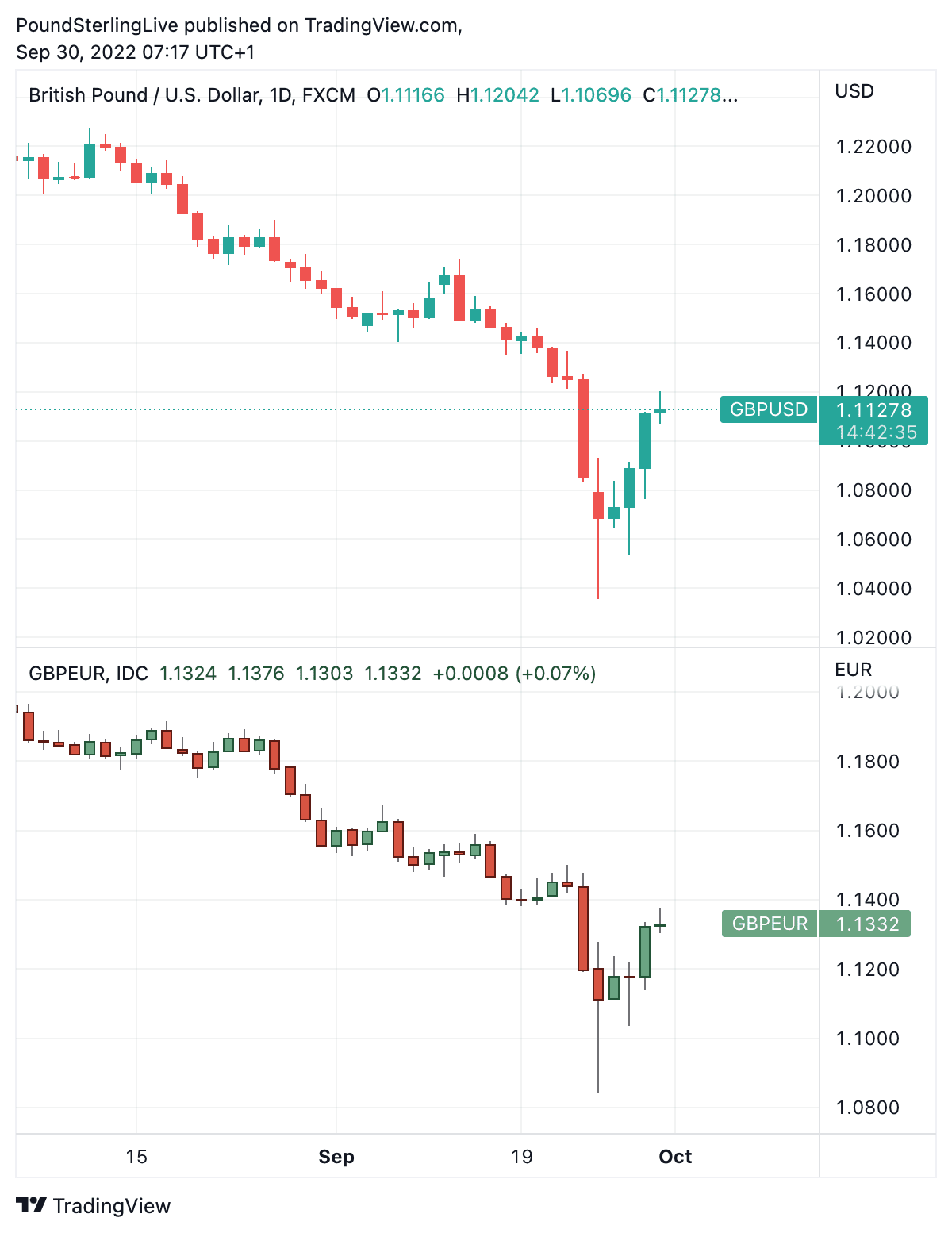 A key trigger to the Pound's recent bounce was Wednesday's intervention by the Bank of England, which bought long-duration bonds to settle a disruptive debt market that was reportedly putting major pension funds in jeopardy.

The intervention saw bonds in the UK, U.S. and EU rally, bringing down yields and easing market concerns.

The Pound's rebound suggests it was holding a great deal of risk premium associated with these bond market stresses.

"We are seeing bearish speculators eased off the gas a little, and this is providing some relief for beaten-down currencies," says Fawad Razaqzada, Market Analyst at City Index.

Foreign exchange markets could be subject to month-end flows over the short-term and therefore some volatility is possible.

It will only be early next week that markets give a sense of where Sterling stands following a truly tumultuous September.

Risks are however elevated as money market pricing shows investors demand a significant rate hike at the next two Bank of England meetings.

Failure to hike aggressively could yet consign the Pound to a soft year-end.

"We continue to think that the bank will hike by 75bp (about half of market expectations) in November. We think the BoE is mindful not to hike too much, which could lead to a substantial credit crunch and real-estate collapse," says Fabrice Montagné, economist at Barclays.

Financial markets have adjusted sharply over recent days to account for future government borrowing needs. A combination of the energy price guarantee and tax cuts, that will all be funded by issuing new debt, have meant UK government bond yields have risen sharply.

This in turn impacts on UK lending products, notably mortgages.

The UK's residential mortgage market has 2,340 products in availability as of Thursday morning, down from 2,661 on Wednesday said Moneyfacts.

A record 935 products were previously removed between Tuesday and Wednesday, more than double the prior high set in the early days of the pandemic.

Defence of the property market could prompt the Bank of England to raise rates in smaller increments than the market expects.

"Rapid deterioration of market confidence has had very real and material consequences," says Montagné. "Smaller hikes than the market expects would leave a lower currency as the path of least resistance".

Kamal Sharma, foreign exchange analyst at Bank of America says the Pound has likely slipped into a lower long-term range.

"We believe that GBP is going through a significant metamorphosis as investors view GBP through a different lens than other G10 currencies," says Sharma.

Cyclical considerations, such as the terminal rate at the Bank of England and the quantum of rate hikes, no longer matter as much as they used to, he argues.

Instead, he warns that structural concerns around the UK's deteriorating fiscal and balance of payments situation are what truly count.

"These factors will not easily fade away and we think risk premium in GBP is becoming increasingly embedded. The Great GBP reset is well underway," says Sharma.